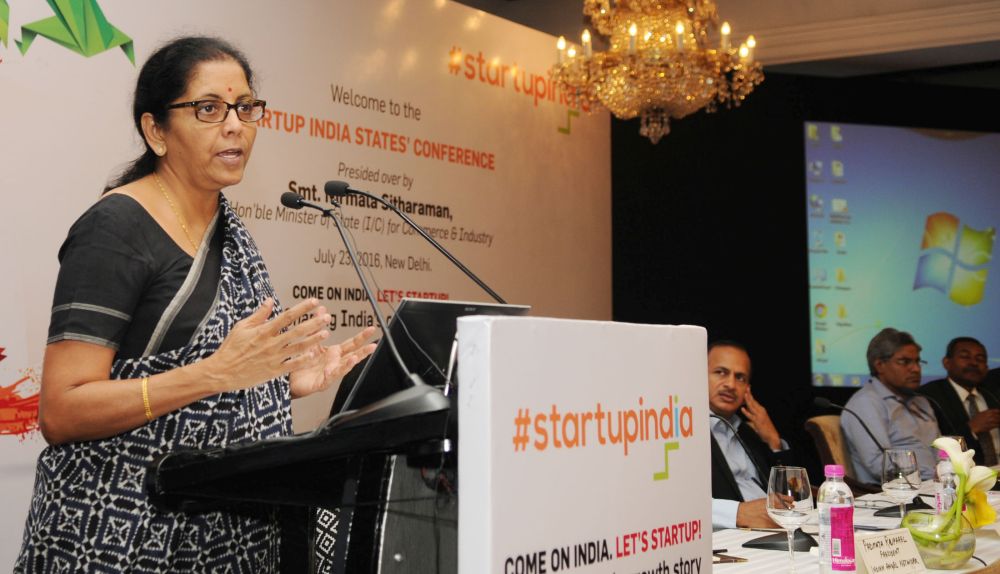 The Minister of State for Commerce & Industry (Independent Charge), Smt. Nirmala Sitharaman delivering the inaugural address at the Start Up India States conference, in New Delhi on July 23, 2016.

The Minister of Industry and Commerce Nirmala Sitharaman is looking to set up a Startup Coast in Karnataka to facilitate entrepreneurs in South India, as part of efforts by the Indian government.

As per reports, the Startup Coast will comprise two innovation centres and up to five incubation hubs in colleges. Apart from this, it will also have a 100-seater workspace in Mangaluru. The project will also entail the installation of 20 to 30 laboratories in schools across the region.

The Startup Coast initiative is spearheaded by the current Commerce and Industry Minister Nirmala Sitharaman, who also represents Karnataka in the Rajya Sabha. In fact, it is the first of its kind to be backed by the Members of Parliament Local Area Development Scheme (MPLADS).

Commenting on the development, Sitharaman said, “With the rich talent pool that exists in the area, I am sure that given the right conditions, a robust innovation/start-up ecosystem can thrive in coastal Karnataka. As an MP from Karnataka, I will invest my efforts to make sure that I can support the development of physical and human infrastructure necessary for innovation to thrive in the area. This shall be the first step towards shaping the ‘startup coast’ of India.”

Originally intended to make Mangaluru the country’s first startup district, the project has been extended to other parts of Karnataka, such as Karwar and Udupi. According to ET, the Startup Coast project will be complete by 2019.

Plans for the construction of the five incubation centres and a 100-seater working space for aspiring entrepreneurs are already underway. The office space, which aims to be ready before December 2017, will be located in Mangaluru. Two innovation hubs will also be set up in the National Institute of Technology in Surathkal and NMAM Institute of Technology, respectively.

The Department of Industrial Policy & Promotion (DIPP) is planning to enlist the help of IIT-Madras Professor Ashok Jhunjhunwala to oversee the process. As part of the ongoing Atal Innovation Mission (AIM), around 20 to 30 Atal Tinkering Laboratories are slated for installation in schools across the state. Schools can participate through the NITI Aayog. In June 2017, it was reported that a grant of about $31K (INR 20 Lakh) each will be offered to 1,000 schools under the AIM mission. The funds, according to NITI Aayog CEO Amitabh Kant, will be utilised to set up tinkering labs as a way of fostering technological innovation.

As stated by the organisation, “To maximise the impact of the ATLs, AIM will soon be launching Mentor India – a strategic nation-building initiative to engage leaders who can guide and mentor students in the ATLs. Mentor India is envisaged to be the largest formal volunteer network in India.”

Earlier in June 2017, Nirmala Sitharaman had urged Indian MPs (Members of the Parliament) to help set up incubators and coworking spaces in their respective constituencies. Prior to this, she used her MPLAD funds for setting up an incubator and coworking space in Mangaluru. She had invested $183K for the same.

Since its launch on January 16 2016, PM Narendra Modi’s ‘Startup India Action Plan’ has recognised 1333 applicants as startups and 39 Indian startups have been approved for availing tax benefits by IMB, as of the second week of June 2017. Under the umbrella of ‘Startup India, Stand Up India’ movement, the central and state governments are offering loads of perks, including the $1.5 Bn “Fund of Funds” scheme, tax exemptions and the inclusion of foreign investment. However, to date only $848K (INR 5.66 Cr) of the $1.5 Bn (INR 10, 000 Cr) “Fund of Funds” corpus was actually disbursed.

To accelerate the startup revolution, the government promised to disburse $760K (INR 5 Cr) as collateral free loans to the startups in March 2017. In May 2017, the first Startup India summit was organised by the Indian Embassy in Abu Dhabi, UAE in collaboration with non-profit think tank iSPIRT and TiE Dubai. Among the companies that were invited to participate were deeptech startups AllgoVision, Locus, Oizom, Posist, and Team Indus; SaaS platforms like Capillary Technologies, CloudCherry, and Fyle; and fintech companies such as Capital Float, Faircent, Remitr, and ToneTag.

The launch of the Startup India Online Hub in June has further facilitated entrepreneurial endeavours in the country. At present, it serves as an online platform for startup founders, investors, experts and mentors to connect and engage with one another.  The portal also connects academia, incubators, accelerators, corporates, government bodies, etc. At the Startup India hub launch,  it announced a collaboration with NYC-based tech incubator Collaborizm to select potential Indian startup projects and help entrepreneurs pursue their ideas.

Recently, Nirmala Sitharaman announced plans to introduce a SAARC meetup for startups based in Afghanistan, Bangladesh, Bhutan, India, Nepal, Maldives, Pakistan and Sri Lanka.The ultimate aim is to create an exchange programme for startups that will shed more light on the startup ecosystem of South Asian countries. The Indian government has also joined hands with Israel to develop a five-year technology fund called the Israel-India Innovation Initiative Fund, or I4F, which will help improve the business relationship between both countries.

In a bid to bolster the startup ecosystem, PM Modi has also reportedly teamed up with Portuguese Prime Minister Antonio Costa to build the first India-Portugal International Startup Hub in June 2017. As part of another initiative that shares a similar goal, the government has invited the top 20 American CEOs – including the heads of companies like Amazon, Google Microsoft and Apple – to invest in Indian startups.

The new Startup Coast project is one of Nirmala Sitharaman and the Modi government’s many initiatives aimed at broadening the scope of the Indian startup ecosystem.