During US Visit, Modi Also Announced That The GoI Had Made 7,000 Reforms For Ease Of Doing Business In India 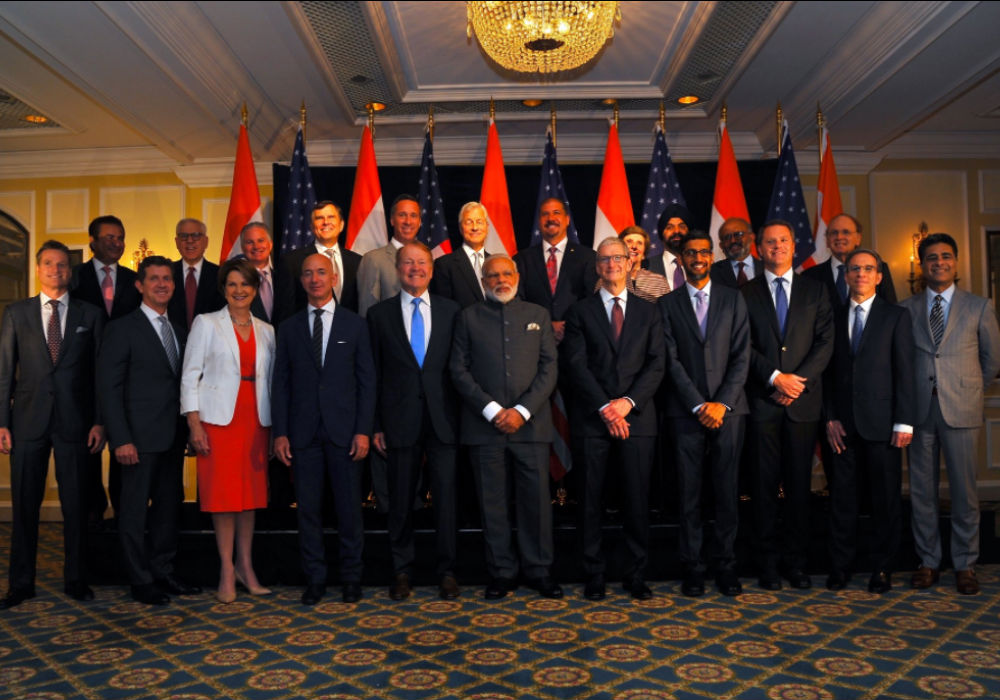 While highlighting India as a business-friendly nation, Prime Minister Modi asked the CEOs of Amazon, Google, Microsoft, Apple, among others to invest in India – during his US visit. The reason for Modi’s insistence can be attributed to the impending GST rollout, next week.

He also mentioned that the country has attracted the largest FDI (foreign direct investment) in the last three years.

Indian Prime Minister Narendra Modi is on a three-nation tour to Portugal, US, and the Netherlands. The United States was his second stop for the same. During the US visit, PM Modi had a roundtable meeting with the top 20 American CEOs in Washington DC.

Modi explained that the government was utilising the principle for, “Minimum government, maximum governance.” The sentiment was iterated by Gopal Bagley, a spokesperson for the Ministry of External Affairs who tweeted the PM’s quote from inside the meeting.

“The whole world is looking at India. 7,000 reforms alone by GOI for ease of (doing) business and minimum government, maximum governance,” stated PM Modi during his US visit to Washington DC. Modi also emphasised the government’s insistence on “efficiency, transparency, growth and benefit for all.” Bagley also mentioned the potential for public-private hotel partnerships in the tourism industry at 500 Indian railway stations.

As per Modi, the world is focussed on the Indian economy, where the government has worked to improve the quality of life since coming to power. Factors such as a young population and a rising middle class are generating interest from global players in fields such as manufacturing, trade and commerce, and people to people communication. To do so requires global partnerships, and that is what the government is working on.

Other topics that were discussed in the US visit CEO roundtable included Digital India initiatives, skill development, the impact of demonetisation as well as India’s accelerated thrust for renewable energy.

The CEOs participating in the discussion then mentioned the work the NDA government had done. Be it demonetisation, Digital India or skill development. All these initiatives received appreciation from the foreign companies. They showed their willingness to participate in improving skill development and education in India. But PM Modi was insistent on their cooperation in specific areas. Namely, women empowerment, renewable energy, startups and innovation.

Some practices that PM Modi suggested include linking sanitary practices, products and technologies with the requirements of school going girls. He emphasised that his primary interest is improving the quality of life in India.

The CEOs also showed willingness to talk about a number of other programmes. Social-led industries such as digital technology, education, and food processing came up for discussion, with the CEOs mentioning the drives undertaken by their companies for the same. Bigger themes such as infrastructure, defence manufacturing and energy security were also discussed.

On the subject of GST, the Prime Minister stated that it is a culmination of years of effort. He further added that the execution of GST was such a complex and layered effort that it might well be a case study for others in years to come. According to PM Modi, the rollout of the GST has shown that India is ready to take big decisions and implement them swiftly.

At the conclusion of his CEO roundtable US visit, PM Modi reiterated his opinion that India and the US have shared values. According to him, India would be a natural beneficiary of America’s strength.

Amazon India And Its Plans

After his interaction with PM Modi, Amazon’s Jeff Bezos endorsed the Startup India bandwagon. In a tweet, he noted that he had “terrific meeting with @narendramodi,” tagging the PM on his personal handle.

“Always impressed, energized by optimism and invention in India. Excited to keep investing and growing,” he continued. In keeping with Amazon’s aggressive expansion policies in India, the company has already invested a significant amount in its ecommerce marketplace and the business-facing enterprise, Amazon Wholesale. Amazon has also made news recently when the Government approved Amazon’s proposed $500 Mn investment in Indian food retail. It has also invested in warehousing and infrastructure, building fulfilment centres in 13 cities in 7 states.

Amazon has introduced several new initiatives such as Amazon Prime Video, Basics, digital payments arm Amazon Pay in the last few months to keep up with homegrown unicorn Flipkart. Its latest investment has been securing 6 Lakhs. Sq.ft. of space in Hyderabad for warehousing, infrastructure and office facilities.

PM Modi US Visit – What To Expect Today

PM Modi is also expected to meet US President Donald Trump as part of his tour of the country.

As per reports, the two leaders will meet at 330 pm, Eastern Standard Time, for a one-on-one discussion.

The initial discussion will be followed by a meeting with various delegates from the two governments. Senior aides such as Mike Pence, the National Security Advisor, Lt. Gen. H R McMaster, and the Secretary of State, Rex Tillerson, Defense Secretary James Mattis, the Commerce Secretary Wilbur Ross, and the Treasury Secretary Steven Mnuchin are expected to be part of the meeting.

The tightening of H1B visa measures and establishing new priority areas between India and the US will be part of the agenda. The talk, reportedly, lasting five hours will also include further discussion on Indo-US bilateral trade ties.

Recently, Modi met Russian PM Vladimir Putin to discuss bilateral trade relations between the two countries. Ecommerce, a hot sector of industry in India, was not part of the discussions. Just last week, Inc42 reported that Minister of Commerce and Industry Nirmala Sitharaman announced the setting up of a SAARC meet for startups during the launch of the Startup India Online Hub.

PM Modi has visited a number of foreign nations in order to forge a strong international presence for the emerging nation. And to place the country on the forefront of global economic leaders. In the wake of the government’s two big moves – GST and demonetisation – it remains to be seen how US industry leaders, the US government and India are able to forge a strong and stable coalition and how the US visit is going to bring boost for Indian startups.