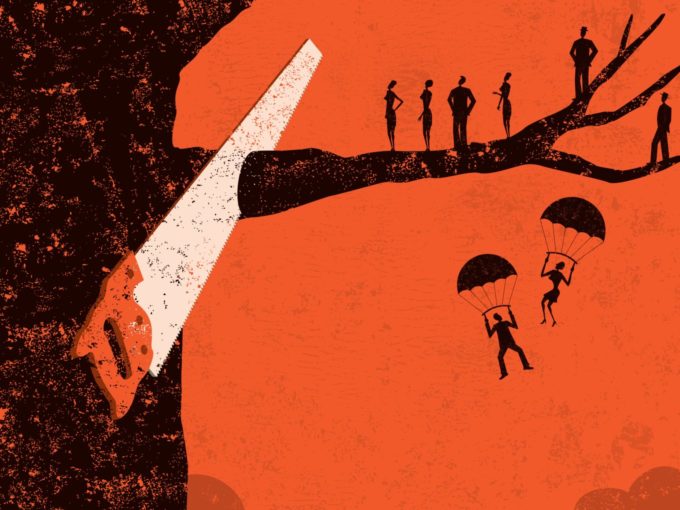 Bengaluru-based agritech startup Ninjacart which sells grocery and fresh produce to retail outlets has terminated employment contracts of around 15-20 employees working in the ground operations, Inc42 has learnt from multiple employees who spoke on condition of anonymity.

According to at least three employees who spoke with Inc42, their manager at Ninjacart had allegedly hijacked their login IDs and sent resignation letters on their behalf without taking consent.

The company has also refused to provide the mandatory notice period that is in-built in each employee’s hiring contract.

“My shift usually ends late in the night around 9 PM or 10 PM, but on 11th February at 3 AM in the morning, someone got hold of my login ID and placed a request for resignation. But this request was placed without my consent and there were no heads up from the management,” said one of the employees quoted above.

Inc42 has reviewed two copies of the termination letter that were served to the employee quoted above. The resignation request was placed via HR management app.

The first termination letter which was sent out at 3 AM on February 11th specifies that the last date of work for the employee would be 11th April, or 60 days as per the employment contract.

However, the same employee received another termination letter at 10 AM on February 11th, which mentioned the last working day for him as February 12th, 2020. This essentially meant that the company was bypassing the mandatory notice period of 60 days.

At least two other employees have confirmed that Ninjacart had placed resignation requests on their behalf without their consent using the Darwinbox — the HR management app it uses.

According to a copy of the contract letter of one of the employees reviewed by  Inc42, employees need to be given at least 7 days of notice before terminating an employment contract, while in some cases, the notice period mandate is around 60 days. Ninjacart’s decision to forcibly terminate employees without notices can be legally upheld only if the employees were found to be breaking contract agreements such as unlawful conduct, theft, or gross negligence.

“This is going to be a very complicated scenario to prove, since it is going to be difficult to understand who accessed the employee’s account to login without the person’s consent, and secondly, how they were able to access the personal login and password of the employee. If the company is found to have actually used the employee account without his or her consent to place a resignation request, then this is not just breach of trust, but also illegal,” said a co-founder of a staffing and human resource management company that works with tech startups. The founder asked to remain anonymous as the person isn’t authorised to comment on other companies publicly.

According to another expert on HR matters, If the employees can prove that their accounts were hijacked by their manager or anyone else, the company would face the charges under IT Act, 2000, Industrial Disputes Act, 1947 and also possibly under Karnataka Shop Establishment Act.

Inc42 had reached out to the company for a comment with a detailed questionnaire on Thursday (February 11th). The company, however, did not respond to the emailed questions at the time of writing this article.

Three of the employees who were fired from their roles in the midnight hours of February 11th stated that they were not apprised of any reasons by the management behind the termination. Apart from this, they also detailed instances of verbal harassment and abuses hurled at them for not meeting operational targets.

“Our cluster manager used to verbally abuse us on public employee WhatsApp groups and calls, and overall this contributed to bad morale among employees. Due to the severe toxic environment prevailing at work, one executive from the ground team had decided to put down his papers citing harassment from his manager,” said one of the employees mentioned earlier in the article.

Ninjacart was founded in May 2015 by Thirukumaran Nagarajan, Sharath Loganathan, Sachin Jose, Kartheeswaran KK and Vasudevan Chinnathambi. To date, the company has raised around $190 Mn in funding from the likes of Flipkart India, Walmart, Trifecta Capital, Accel Partners, Qualcomm Ventures, and others.

The agritech startup sources groceries, fruits and vegetables directly from farmers and then, supplies these to supermarkets and kirana stores. The startup currently employs around 250-300 employees in Bengaluru, and a total of over 2,000 employees nationwide, Inc42 has learnt from another executive in the company who wanted to remain anonymous.

Ninjacart has also moved into the fast-moving consumer goods (FMCG) segment by procuring from big brands and selling to store owners and other resellers. The startup claims to move over 1,400 tons of fresh produce (fruits and vegetables) per day from farmers across more than 20 Indian states and delivers to over 17K local kirana stores and restaurants in seven Indian cities daily — Chennai, Hyderabad, Mumbai, Ahmedabad, Bengaluru, Delhi NCR and Pune.