Curefit lays off and furloughs around 600 employees, in second round of downsizing due to Covid-19 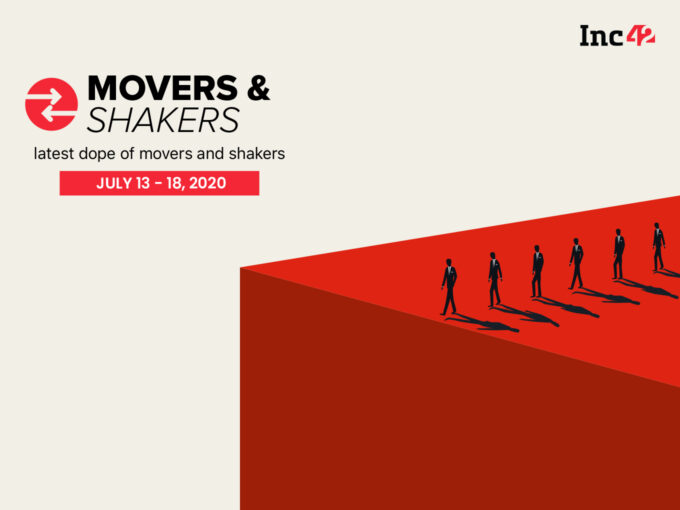 This week, Confederation of Indian Industry announced that Snapdeal’s cofounder & CEO Kunal Bahl has taken over as the Chairman of its ecommerce committee for the year 2020-21.

The upcoming ecommerce policy, the consumer protection rules and a consistent interpretation of the intermediary status of ecommerce platforms figure high on the immediate agenda of the committee. The Committee had resolved to use the growth and momentum of India’s ecommerce sector to support the revival of India’s economy.

The committee will also focus on resolving policy issues that will help accelerate the growth of exports through e-commerce platforms. The committee will work closely with the government to support harmonisation of various laws under finalisation with the aim to ensure ease of business and compliance for the industry

Further, this week, reports surfaced that Ola Electric’s chief business officer, Sanjay Bhan, who joined the company in December 2019 to lead its marketing and sales, has quit. He was tasked with onboarding dealer partners in 2020 as Ola Electric readies for a big-bang launch of its commercial operations next year. Bhan has been an automobile industry veteran, having spent three decades at Hero Motocorp before his role at Ola Electric.

Bhan is the latest in the series of departures at Ola and Ola Electric. In July 2019, Ola Electric cofounder Anand Shah had left the company’s day-to-day operations to assume a part-time role.

Further, after laying off 700-1000 employees in May, health and fitness soonicorn Curefit has once again resorted to downsizing in order to survive the Covid-19 crisis. This time, the company has laid off and furloughed over 600 employees across several vertices including Eat.Fit, Cultfit, and Curefit.

Around 70-80% of the impacted employees have been furloughed and will be brought back once the gyms start opening up. The former employees also revealed that Curefit expects its business to fully recover in a year’s time.

The laid-off staff will be paid for their notice period and will be offered a severance package of 15 days to three months depending on their roles.

Here are the other movers and shakers of the week:

Global cab-hailing giant Uber announced the appointment of Prabhjeet Singh as President Uber India and South Asia. In his new role, Singh is tasked with overseeing the next phase of growth in the company’s mobility business and ensure the safety of riders and drivers across India, Sri Lanka and Bangladesh.

Singh is replacing Pradeep Parameswaran, who has been elevated as Regional General Manager for the Asia Pacific.

Singh was previously director operations and head of cities for Uber and had joined the company in August 2015 as head of strategy and planning, from McKinsey and Co., where he was an associate partner. Since, he’s been part of the core team that adapted the global business model to India, launched multiple new cities and led several India-first innovations, including scaling up Auto and Moto categories and building a multi-modal platform, which have both been exported to other emerging markets.

Further, Vidhya Duthaluru, former Director, Engineering, has also recently been promoted as the global head of engineering for the customer care platform.

Bajaj has been Country Manager in India since 2015. In his expanded role overseeing Southeast Asia, Hong Kong and Taiwan along with India, Bajaj will be responsible for driving Airbnb’s strategy and long-term growth in some of Airbnb’s fastest-growing destinations in Asia-Pacific, which have grown on average almost 40% YoY as of 2019.

He joined Airbnb in 2015 and has had stints with American Express and EY in the past. Prior to joining Airbnb, he cofounded Letsbuy.com in 2010, which was acquired by Flipkart.com in 2012.

Bajaj is taking over from Mike Orgill, the former General Manager for Southeast Asia, Hong Kong and Taiwan, who is returning to his former role as Airbnb’s Regional Policy Director for Asia-Pacific.

Visa has appointed Sujai Raina as Vice President & Head of Business Development for India. He will contribute to Visa’s business strategy formulation and drive profitability and performance of clients and of Visa’s business in India.

At Visa, he will also be responsible for developing strategic relationships with decision-makers and lead a team of professionals to align the delivery of Visa’s global capabilities with client priorities.

Prior to joining Visa, Raina was Head of Cards & Payments at Commercial Bank of Dubai, one of the largest banks in the UAE. With over 20 years of experience in a diverse set of roles spanning sales & distribution, product development, customer lifecycle management and business development, he has worked with leading local and multinational organizations including Citibank, HDFC Bank, Aegon Life Insurance and Mashreq.

Raina will relocate to Mumbai for this role. He is an alumnus of St. Stephen’s College, Delhi and Indian Institute of Management, Calcutta.

With nearly 20 years of experience in various facets of Human resources Management, he has strong experience in shaping the organisational culture, nurturing progressive employee relations and talent & organisational development. He also brings a diverse industry experience by virtue of various stints he had with reputed companies spread across Automobile, FMCG and Retail industries.

Prior to joining Licious, Nerlaje was associated with Tata Starbucks as its Director of Partner Resources. He has also worked with some of the renowned names in India Inc, including Hindustan Unilever where he was associated for nearly 10 years, Nestle India, and Toyota India.

He will be heading all functions under the human resources umbrella and will be responsible for shaping the people agenda to enable growth and scale-up. The company plans to induct top-notch talent and elevate key management roles to aid the next phase of growth while empowering employees for newer growth prospects.

With more than 20 years’ experience at Piramal Housing Finance as Business Head and Executive Director, Chunduru has expertise across diverse functions such as P&L Management, Business development, Corporate Strategy, M&A, Investor Relations and Strategic HR. He brings in extensive experience in managing large teams, working closely with foundations and initiatives as an advisor and/or as a board member, and partnering closely with founders/ promoters/family managed businesses for strategic business growth.

He has also been a key advisor for Ola as its Interim CHRO and CEO (OSPL) and continues to be on the board of Ola group companies (OSPL).

Dr. Chunduru has earlier worked with initiatives in the space of Food, Livelihood, Skill Development and Education. He is the Founder and Member of Board of Vans Group (Vans Investments, Vans Skilling and Advisory) which has interests in varied areas like Edutech, Fintech, Skilling &amp; advisory and HR analytics.

Crowdera is a SaaS technology company that builds scalable fundraising and syndication platforms and solutions with inbuilt virality creating a network effect.

SARVA Sets Up Global Advisory Board

SARVA has brought onboard experts from various domains onto their global advisory board. The advisory team now includes Jen Yu, Ex-Head of Product @Masterclass; Jeniffer Chang, ex Digital Media, Disney and Mayur Gupta, a marketing maverick, Ex Spotify, Freshly, Kimberly – Clark. Each of these domain experts will bring their unique skill sets to the table in helping the brand grow.

With over 10 years working on technology design, user journeys and media, Jen Yu brings an immense pool of knowledge, experience and customer study to whatever she does. Her previous stints include Director of Product Design at Masterclass, Director of Design at Emerald Cloud Club and she currently runs The Cusp, which she Co-Founded.

Jeniffer Chang is a startup veteran who has contributed to the success of over 20 early-stage start-ups. She founded TechSparks, a networking group and consultancy for early-stage companies and has also served as the head of operations for a start-up called FanBread where she worked with a lot of Hollywood celebrities and influencers.

Mayur Gupta was the Chief Marketing Officer at Freshly where he was leading a team of marketers to make Freshly an iconic brand and drive breakthrough growth. At Spotify, Gupta was responsible for growing the free and subscribed user base for the company with growth hacking and data-driven, always-on experiences; among other things.

SARVA has been engaging people virtually through various interactive sessions and immunity booster modules in 25 countries including the US, UK, and Italy. SARVA and its women-centric arm DIVA Yoga have a global digital reach of over 200 Mn.

At Aquaconnect, Arpan Bhalerao will lead the product development, partnerships and alliances and strategic initiatives for the company. Amit Salunkhe will be heading the sales focused on Banking, Financial Services and Insurance (BFSI) Enterprise and Govt vertical.

Bhalerao has worked with Urban Company as AVP. Arpan is a graduate from IIT Madras and completed his MBA from ISB. Salunkhe has worked with CropIn and managed BFSI and West India for them. He comes from the background of sales with 15+ years of experience.

Aquaconnect works with more than 13,000 fish and shrimp farmers and helps them with its AI-powered farm advisory solution FarmMOJO which supports farmers to monitor and track farming activities such as a change in water quality, feed intake, shrimp growth, and disease occurrence precisely.

CBRE South Asia announced the appointment of Parimal Galvankar as the Head of People (HR) for India. Galvankar will oversee CBRE’s pan India human resources activities related to talent acquisition/recruitment, training and development, performance management, organization development, diversity, compensation and benefits that will impact a workforce of more than 10,000 professionals across 10 offices in India.

With over 22 years of experience spanning across geographies and cultures, Galvankar brings extensive domain knowledge, strong focus on client outcomes and broad operational experience to his new role.

He has worked in Learning & Development, Recruitment/Talent Acquisition, Organization Development, Compensation and Business Partner HR functions. He has lived and worked in multiple cities in India, has APAC experience and also completed a 2-year stint at the IBM global HQ in NY, USA.

Omega Healthcare Management Services announced the appointment of Kannan Sugantharaman as Chief Financial Officer (CFO). Sugantharaman will be spearheading the Finance functions at Omega across India, Philippines and the US.

Sugantharaman, a Chartered Accountant with an MBA from Booth School of Business, University of Chicago, has over 21 years of experience in finance operations with some of the leading companies in the industry, where he held leadership positions.

Sugantharaman will play a critical role in shaping the next phase of Omega Healthcare as it embarks on several new strategic initiatives.