Kioson Raised $3.4 Mn Via The IPO Which Was Oversubscribed More Than 10 Times 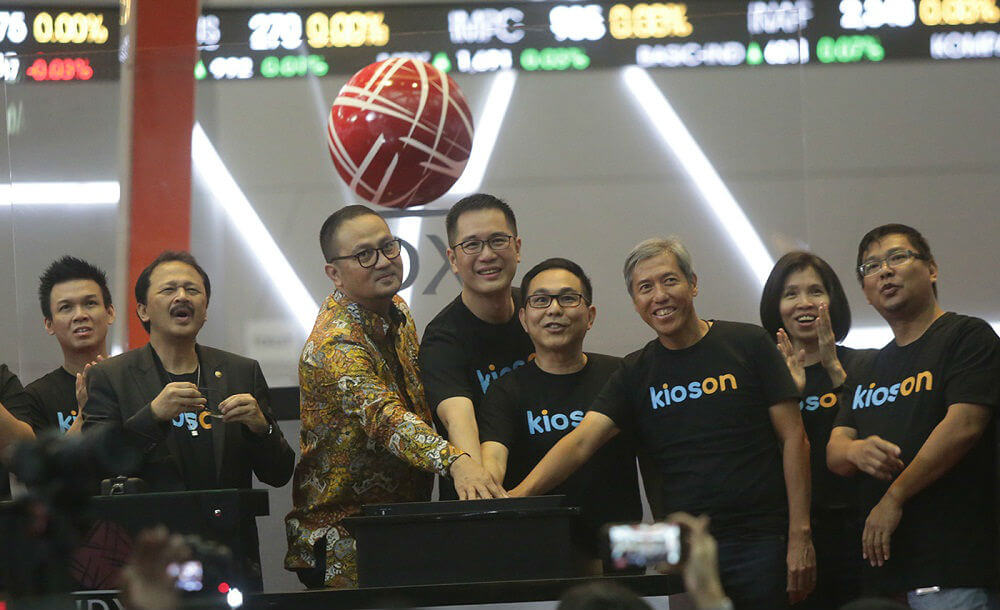 Jakarta based ecommerce online-to-offline (O2O) startup Kioson listed on the Indonesia Stock Exchange yesterday (October 5), raised $3.4 Mn(IDR45.6 Bn) in its initial offering period of September 26-28. This makes Kioson the first tech startup in the country to go for an IPO.

Kioson issued 150 Mn shares selling at $0.02 (IDR 268) per share, equivalent to 23.07% of total shares. The IPO was oversubscribed more than 10 times during the bidding period and Kioson’s shares rose 50% on their debut on the stock exchange.

Jasin Halim, Kioson’s Director stated “We had tried raising fund from VCs, but did not find a suitable partner, so we think the IPO will be game changing for us. We encourage more retail investors to join the capital market to invest in startups.”

This makes Kioson the 24th listing on the Indonesian stock exchange this year of a total of 558 scheduled for this year.

The startup will use almost 76% of the proceeds to acquire PT Monjes Investama’s 99.34% stake in PT Narindo Solusi Komunikasi (Narindo), a digital product distributor. The acquisition which is estimated at $2.25 Mn ( IDR 30.2 Bn) will begin next week. The remaining funds will be used in fulfilling operational costs.

Kioson was launched in May 2015 by veterans in the merchandising, ecommerce, telecommunication and financial industries, viz. Viperi Limiardi, Jasin Halim and Roby Tan. Kioson helps transform traditional offline retailers to jump to the online bandwagon  and become etailers thereby bridging the digital gap and  promote digital economy to the rural areas. It provides hardware and software platform to support small enterprises in Indonesia and engages merchants through a secure and profitable online shopping system by providing tablet devices as a means of transaction.

In June 2017, the startup also raised $450K from Mitra Komunikasi Nusantara, an IDX listed company. Its business model is similar to Kudo, which recently got acquired by Indonesia’s bike taxi aggregator Grab for $100 Mn.

Kioson is targeting to be profitable in 2018. With its successful IPO, it might have a fair shot at that goal. Moreover with its successful listing, it will certainly be a beacon to other tech startups in the Indonesian startup ecosystem to go for the IPO route. Another Indonesia-based startup-online electronics marketplace Bhinneka Mentari Dimensi is also gearing up for an IPO by 2020. The company plans to offer 30% of its total shares as part of an initial public offering.