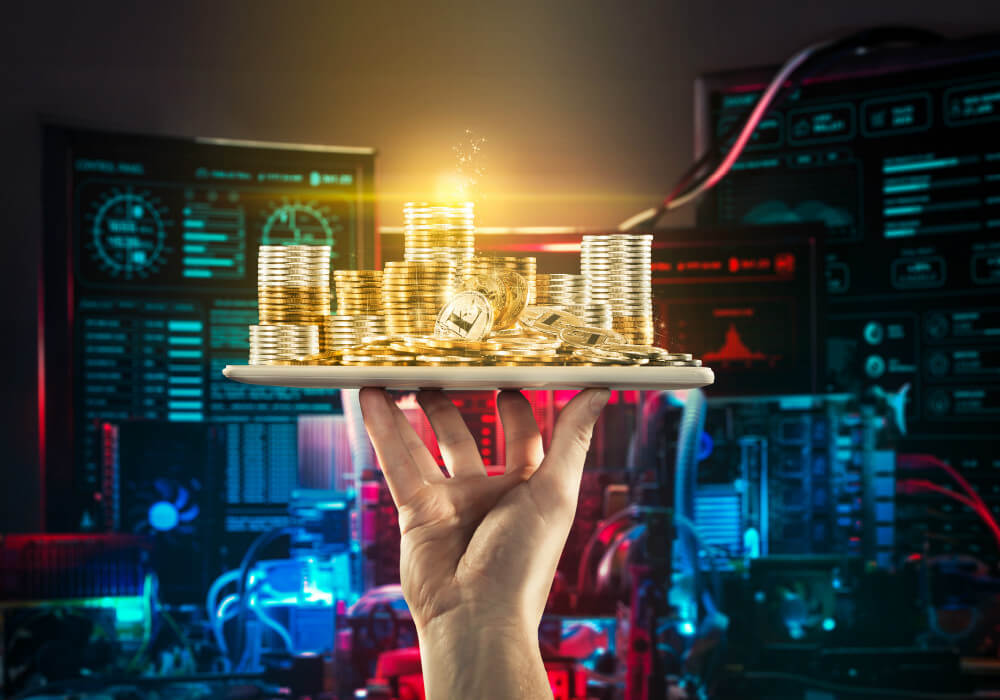 As the RBI hardens its stance and bans banks from dealing with cryptocurrency entities, many Bitcoin investors and exchanges have preferred to HODL (Hold Your Cryptocurrency) until more clarity comes from the government end.

An online petition has also been started at Change.org, asking the RBI to take back its circular. Addressing the RBI and the Prime Minister of India, the petition ‘Make India at the forefront of Blockchain Applications revolution’ has been filed under the name ‘Digital Asset Exchanges of India’.

The petition, which has already been signed by almost 7.7K people, read, “Crypto and blockchain as a concept can’t be stopped. You can just decide whether you want to participate with full throttle or get left behind. The current stance from the government shows they would want to remain left behind after missing the internet revolution first, AI revolution next and now blockchain revolution.”

While Sathvik Vishwanath, co-founder and CEO of Unocoin told Inc42, “We are looking at the issue and studying how to deal with this,” Ajeet Khurana, CEO of Zebpay tweeted, “No way I am stopping. We will continue to do what is best for our customers, and what is best for our country. Am studying the present situation and will react shortly and we will emerge stronger.” 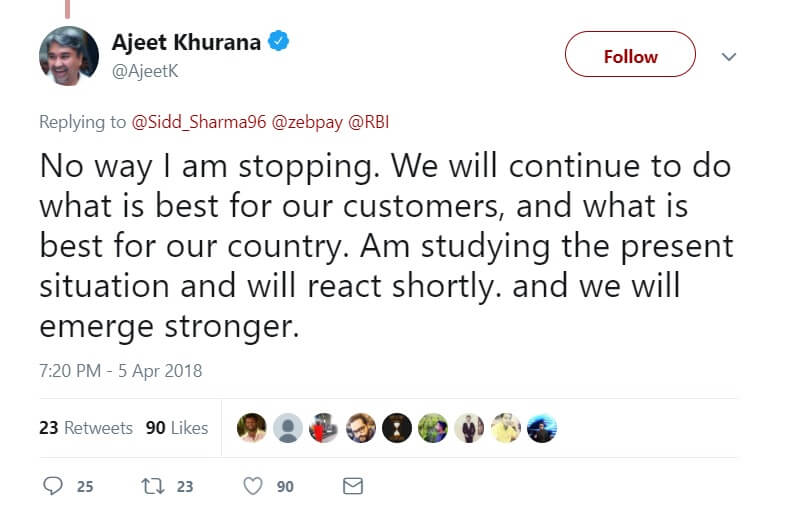 Nischal Shetty, co-founder and CEO of WazirX Bitcoin Exchange tweeted, “US, Japan, South Korea go towards regulating Cryptos so that their country progresses while RBI decides to block Indians from getting involved in the crypto revolution. We need to think progressively, @RBI please reconsider this and let’s take a positive step forward.”

WazirX was the first exchange which posted an immediate reaction on its Medium blog after the RBI press conference yesterday. The statement read, “The announcement today mandating banks to not allow people or businesses in India to deal with cryptos may push us back in time and make us all miss this golden opportunity. Knee-jerk reactions like these are what can cause the future generation to be left behind when the rest of the world moves ahead.”

The post further stated, “The very ethos of democracy is to involve the common people in critical decisions like these. Unfortunately, no one has bothered to involve any of us while deciding the fate of cryptos. There are many Indians who are not part of the government but who understand the underlying technology and its use cases very well. We could all have helped formulate a plan that would have avoided this harsh decision.”

The exchanges have come together seeking RBI to reconsider its stance.

“We are in talks with IAMAI and BACC along with the other industry players to try and seek help in this regard,” Benson Samuel, co-founder and CTO of Coinsecure told Inc42.

“While we can hope that the RBI will re-consider their stance, it would be helpful for them to understand, that this decision can impact the millions of people who have already invested in various cryptos. Also, this decision, will prompt users to move to the cash market, thus limiting regular legitimate businesses and individuals who have been using banking channels to transact/ trade in cryptos and convert them to fiat,” he added.

Shivam Thakral, CEO of BuyUCoin informed, “If Government stands firm on their decision we will have to eventually pivot our business model (Crytp-fiat) to (Crytp-Crypto) thence omitting the Fiat part in totality. But exchanges will continue and instead it will be a global phenomenon.”

Referring to the Shubhash Chandra Committee report, he further added, “We’re hoping for some good outcome from the report though as Banking is the heart of our business. This shall affect or you can say impact our current way of working but certainly not evade it. There continue to be other countries where people will be able to use these cryotocurency.”

As it seems, the banks were apparently aware of the announcement.

Many banks had already started freezing accounts of cryptocurrency exchanges. While ICICI bank abruptly closed the Belfrics India exchange account, Oriental Bank of Commerce too recently released a circular instructing all its branches to freeze all the accounts pertaining to cryptocurrency entities. 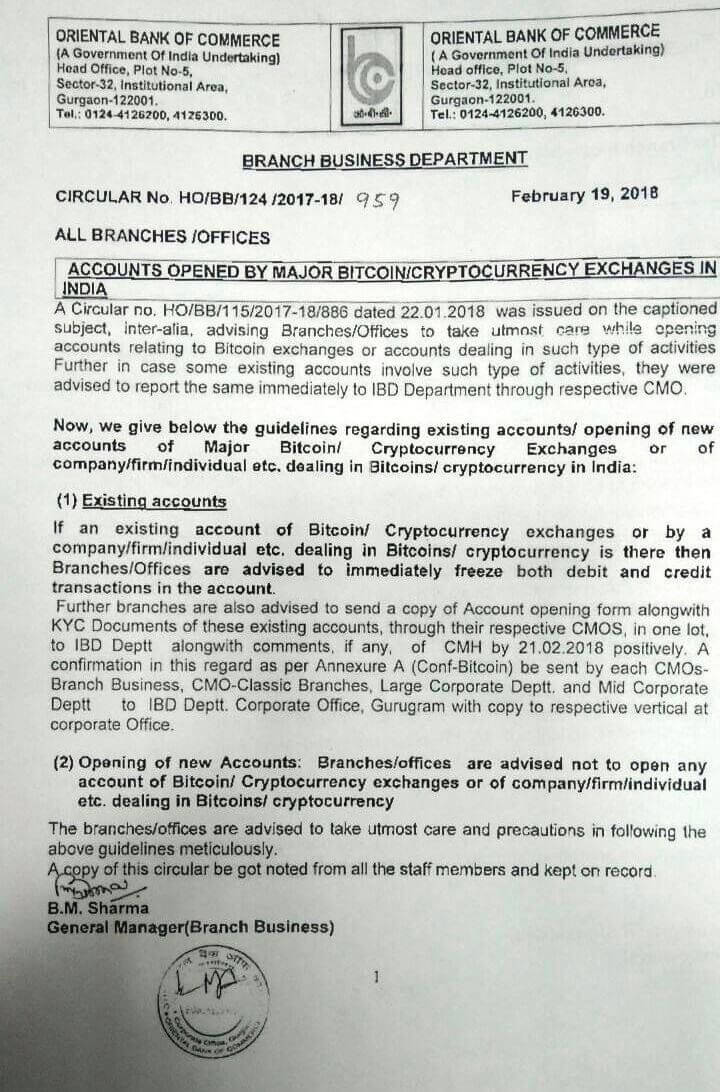 The central bank has given three months to the banks to settle their businesses with entities and consumers dealing with cryptocurrencies. However, leading Indian banks including the HDFC, AXIS, YES, ICICI and Kotak Mahindra Bank have already stopped most of their services to cryptocurrency exchanges and other entities and traders.

So, what will be the way forward for the exchanges and cryptocurrency traders in India?

The RBI has, meanwhile, already constituted an inter-departmental committee to explore the viability of having its own fiat cryptocurrency. The Committee is expected to submit its report in June, this year.

After the ban, the darknet concerns are real as cryptocurrencies are still being traded frequently in China, despite the ban. While earlier, the cryptocurrency trading was a mix of white and grey which has now turned to fully grey zone.

India might face a similar situation. As N.S. Nappinai, Advocate, Cyberlaw Supreme Court stated, “Even if you treat cryptocurrencies as your enemies, then it is advised to keep your enemy closer, under the ambit of certain rules and regulations.”