IndiaMART Turns 25: A Look Back At The B2B Marketplace’s Journey

IndiaMART Turns 25: A Look Back At The B2B Marketplace’s Journey Launched in 1996, IndiaMART pioneered the B2B marketplace model in the Indian tech industry

Exactly 25 years ago, when Brijesh Agrawal and Dinesh Agarwal started IndiaMART, a business-to-business marketplace linking buyers and suppliers, they wouldn’t have expected that it will become an INR 24,000 Cr behemoth and according to KPMG, India’s largest online B2B marketplace.

Founded by Brijesh Agrawal and Dinesh Chandra Agarwal in 1996 and incorporated in 1999, when the internet was still a luxury in India, IndiaMART got its first order from restaurant chain Nirula’s and founder Dinesh Agarwal didn’t shy away from showing his gratitude through his tweets to investors. 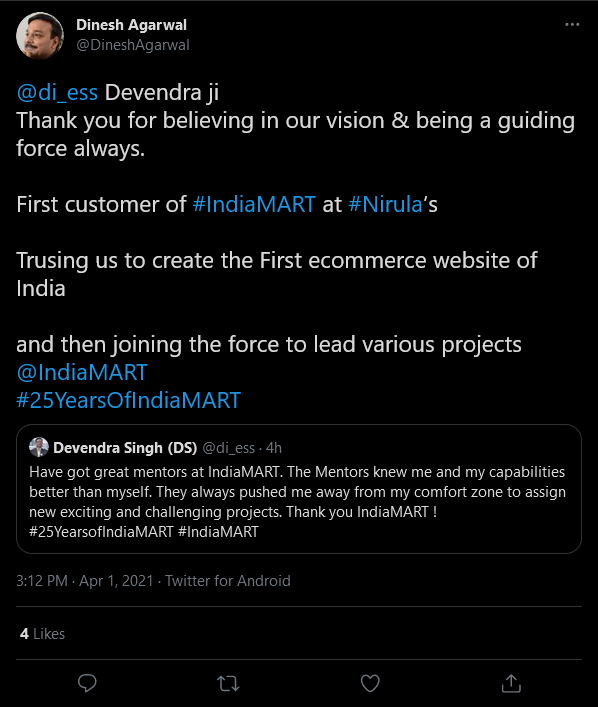 The company managed to rope in 45 customers in the first year of its inception and it ended its first fiscal with INR 6 Lakh in revenue at a time when ecommerce operations were nascent in India. By 1999, the internet ecosystem would experience an exponential boom in India with the dotcom bubble. The valuation of digital companies skyrocketed and IndiaMART expanded as well. It hit a milestone of achieving revenue of INR 1 Cr with INR 10 Lakh profit in the year. 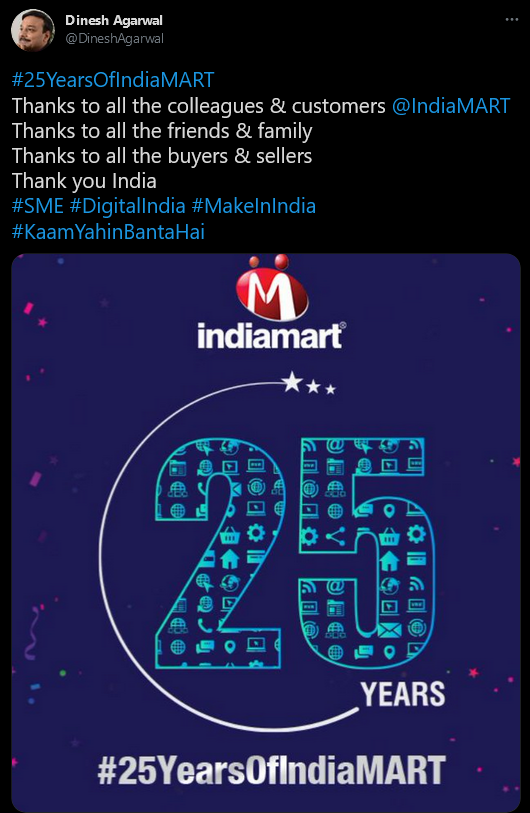 By the time, the Indian ecommerce market grew with the likes of Flipkart and the entry of Amazon, IndiaMART had survived the 2008 financial crisis. It raised INR 50 Cr from global venture capital firm Intel Capital in 2009, and the following year it reported a revenue of INR 50 Cr.

By the time it got listed on the BSE in June 2019. the company had managed to create a niche in the B2B ecommerce market, despite the entry of Udaan, Moglix and Infra.Market and other players in the same space. It managed to double its registered user base from 50 Mn in December 2018 and reached the 100 Mn user mark in the last quarter of FY 2020. Notably, the company has a strong presence in Tier 2 and Tier 3 markets as only 33 to 34% of its traffic come from the top eight metro cities. It also claimed that controls 60% of the total B2B ecommerce market. Given its reach, IndiaMART attracted adulation from various corners of the startup ecosystem on its silver jubilee. 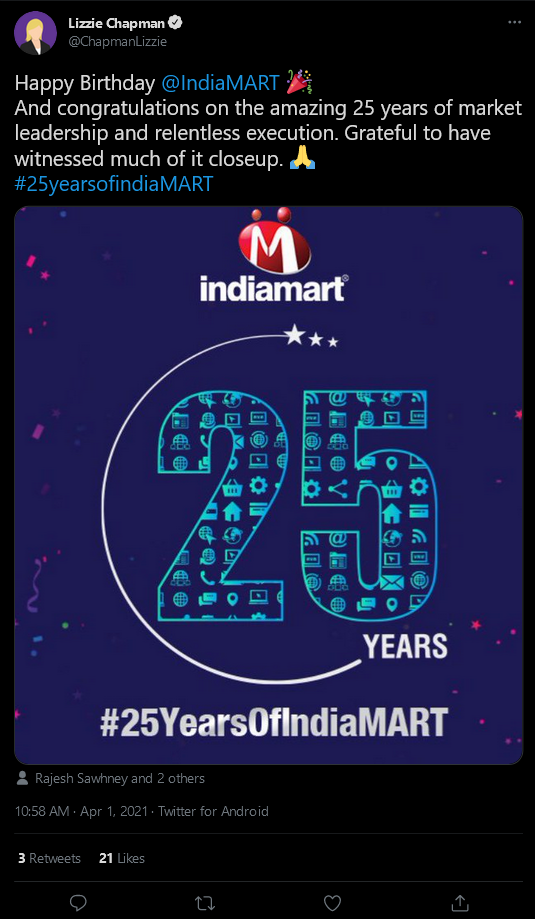 He also said that the larger geographical reach and product assortment has helped the company record 10 Cr buyers on its platform. The IndiaMART CEO claimed this is the first B2B marketplace to reach this mark. With 66 Mn products listed in over 100K categories ranging from groceries to electronics, this allows the company to attract large numbers of buyers and sellers. Besides this, the platform also has close to 6 Mn sellers listed on the platform.

“Because of this large base, our penetration in Tier 2 and Tier 3 markets is strong. At IndiaMART, only 33 to 34% of our traffic comes from the top 8 metro cities. Rest of the traffic comes from Tier II and Tier III towns and especially from small villages and tehsils and districts across India,” Dinesh told Inc42 in February last year.

As per its last financial statement, IndiaMART recorded total revenue of INR 565 Cr for the first nine months, from April to December-end, of the current fiscal year FY2021, according to the company’s filings with the Bombay Stock Exchange. With an average quarterly profit of INR 70 Cr, IndiaMART could comfortably cross the INR 300 Cr mark in FY21.