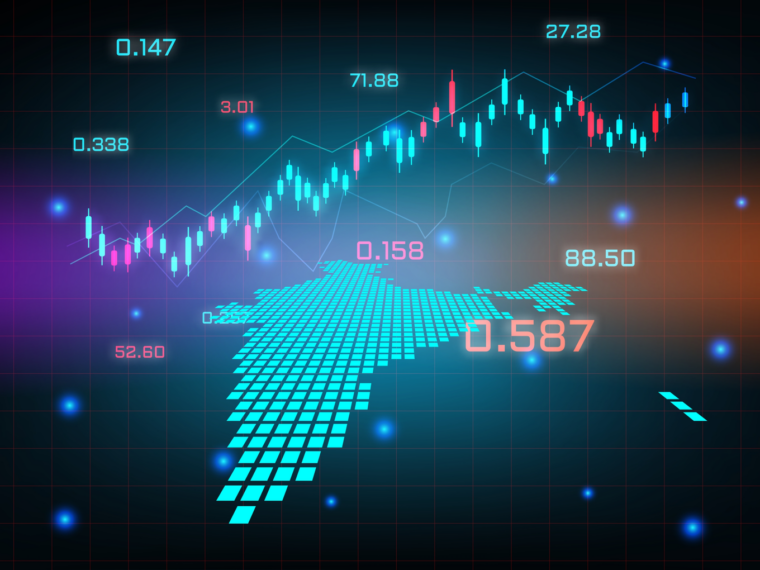 The report by StartupBlink ranks the countries and cities on metrics such as number of startups, traction of the ecosystem’s top startups, among other economic indicators

India jumped 28 spots to be ranked 19th among 100 countries in the list of top 100 startup hubs of the world in 2021, according to a report by StartupBlink. The same report had ranked India at the 48th position in 2020.

Earlier, a report by Startup Genome had placed Bengaluru at the fifth position in the world for tech venture capital investments in 2022. Startups from Bengaluru raised $7.5 Bn in funding between January and May 2022, only fifth to Silicon Valley, London, New York and Boston.

The report by StartupBlink ranked countries and cities on metrics such as the number of startups, coworking spaces, accelerators, traction of the ecosystem’s top startups including making of unicorns, providing investor exits and startups that made a global impact, among other economic indicators.

It said that countries such as India received an added advantage during the ranking due to their population, essentially translating into a scalable market, reflecting massive potential.

However, it isn’t only about the population. India has 102 unicorns, the third-highest in the world next to the US and China. From getting its first unicorn in 2011 to a decade-long wait to get 100th startup with a $1 Bn valuation, India’s average unicorn count stands at 10 per year. 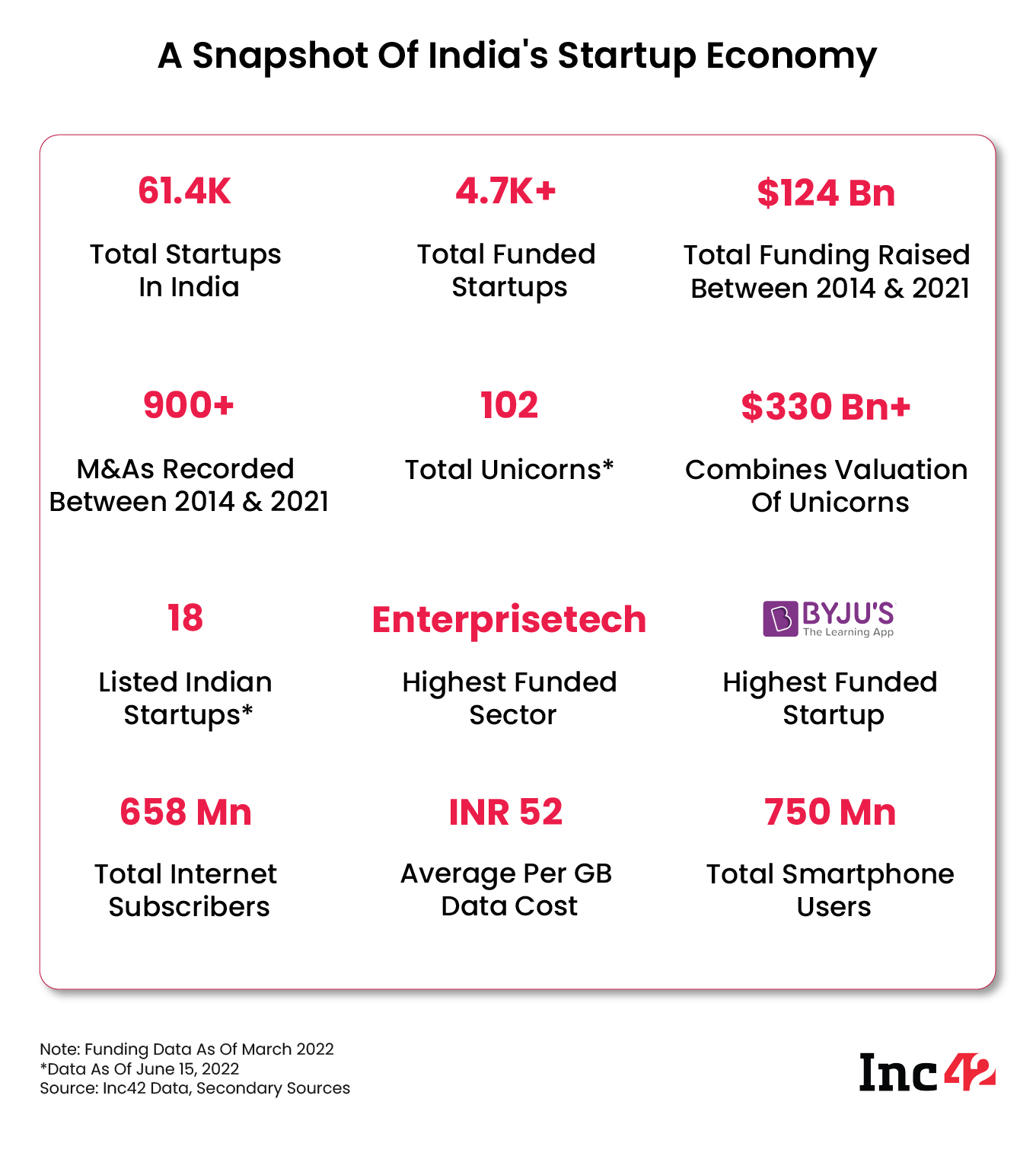 However, the Indian startup ecosystem received a big boost in the last 18 months. Startups including Mensa Brands, Globalbees and Apna joined the unicorn club in less than two years of starting operations. Since the start of 2021, India has produced 60 unicorns.

Of the 102 unicorns in the country, Bengaluru alone is home to 40 of them. Bengaluru-based startups raised $5.7 Bn across 167 deals during the March quarter of 2022 alone.

According to the Economic Survey 2021-2022, the total number of startups recognised under the Startup India initiative has now grown to 61.4K (as of January 10, 2022) and these startups have created over 600K jobs. In 2021, 11 tech companies and startups went for public listings and raised over $7.36 Bn through their initial public offerings (IPOs).

Bengaluru Continues To Be The Startup Capital 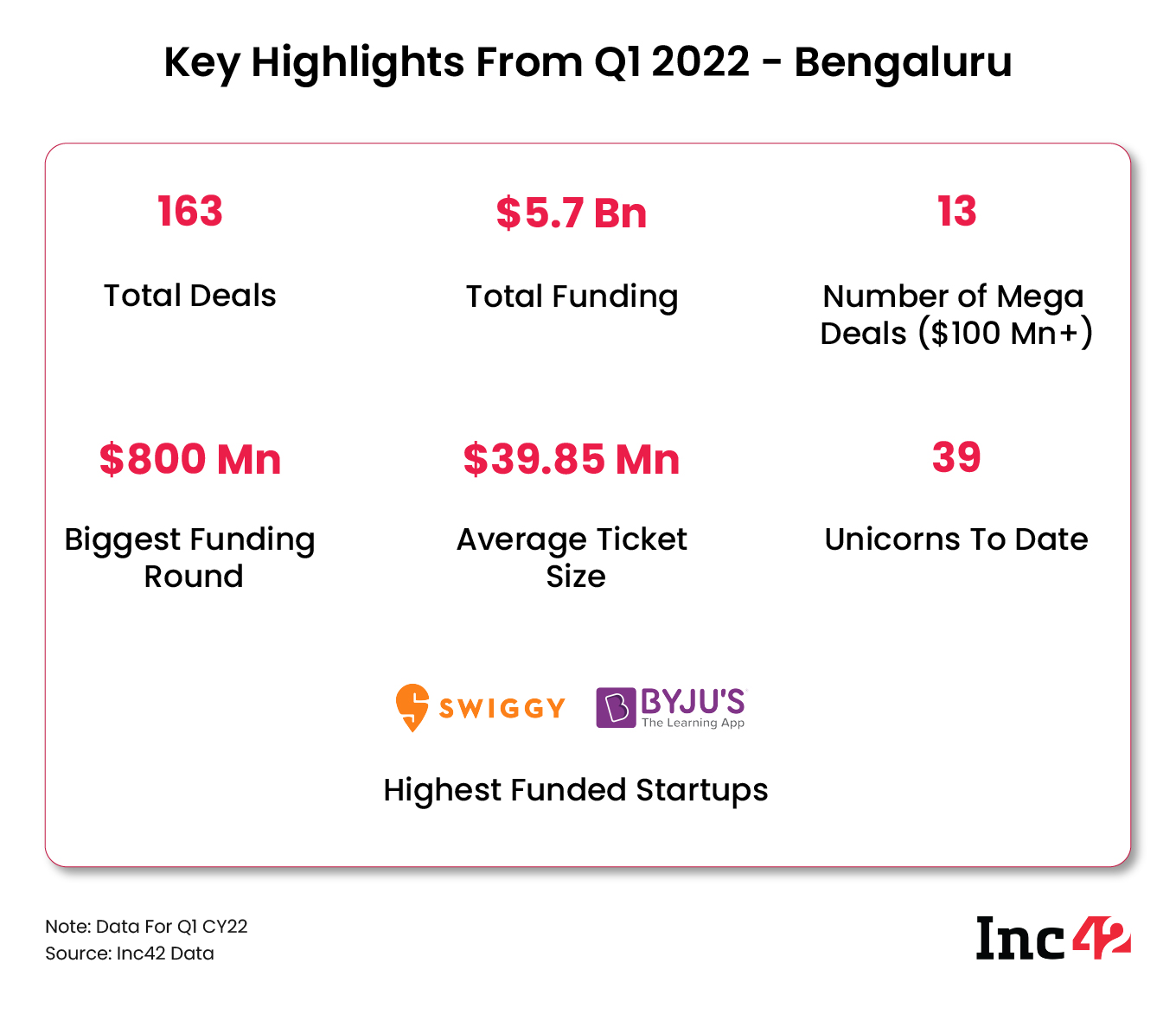 A lot of reports have described Bengaluru as one of the world’s fastest-growing tech hubs. The city is home to close to 11K startups and is also a growing R&D hub for tech giants such as Amazon, Microsoft, and Meta, among others.

Some of the bigshot Indian startups that have made a mark globally are from this city, including the likes of Swiggy, Vedantu, and Ather Energy.

The Karnataka government was among one of the first Indian state governments to establish a dedicated Startup Cell to promote the startup ecosystem and provide early stage funds and proof of concept grants, besides setting up a startup incubation centre. The Karnataka government also provides seed funding of up to INR 50 Lakh to startups in the state.

“Today 55% of the total value of startups in India is from Bengaluru,” Karnataka’s IT minister Ashwath Narayan said recently. He also pointed out that out of India’s total FDI inflow of $83.57 Bn in FY22, Karnataka startups received 38% of it.

Bengaluru has also emerged as the forerunner for talent across the country and now, the state government is looking to build a set-up so that more Intellectual Property Rights (IPRs) are developed and registered in the state.

Delhi & Mumbai Rising Through The Ranks 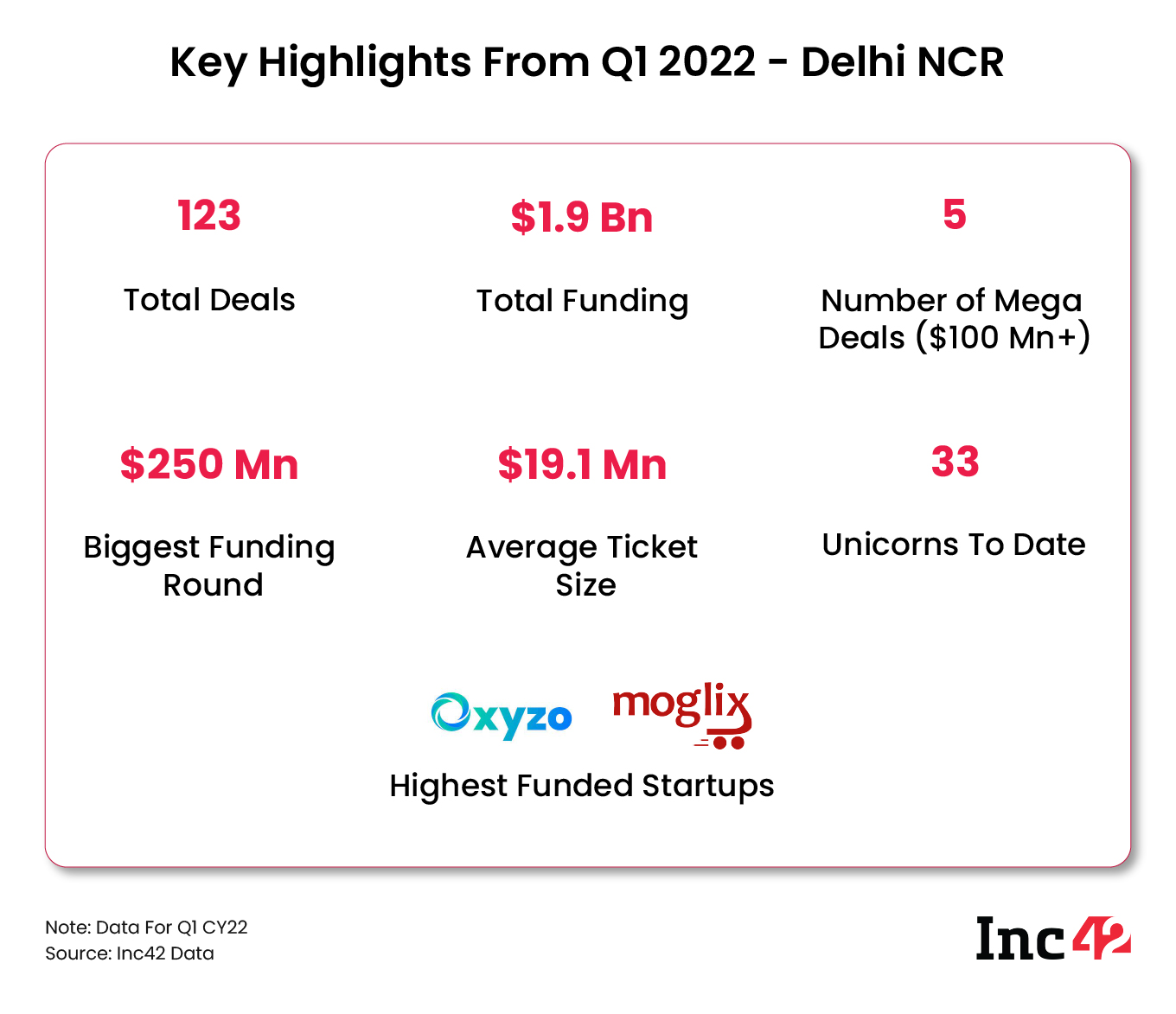 Funding activity increased in Delhi as well as Mumbai, irrespective of the large fund flow to Bengaluru.

Last year, Mumbai moved out of the emerging ecosystems’ tag, according to the StartupBlink report, mainly due to three exits of over $1 Bn provided to investors, including Nykaa’s $7 Bn IPO and the addition of a total of six unicorns.

Although, for the third rank, the financial capital of India lags in terms of ease of doing business for startups including high real estate and hiring costs, and less availability of tech talent.

In the past few years, the Maharashtra government has taken note of the problems and has launched a slew of initiatives and investment vehicles such as the SIDBI-led Maharashtra Social Venture Fund, Maharashtra State Defence and Aerospace Fund and IDBI Capital-led fund and the most recent INR 200 Cr women-focussed fund for deeptech startups.

The Delhi government too has announced the Delhi Startup Policy to ease entrepreneurship in the nation’s capital and help make Delhi India’s startup capital. 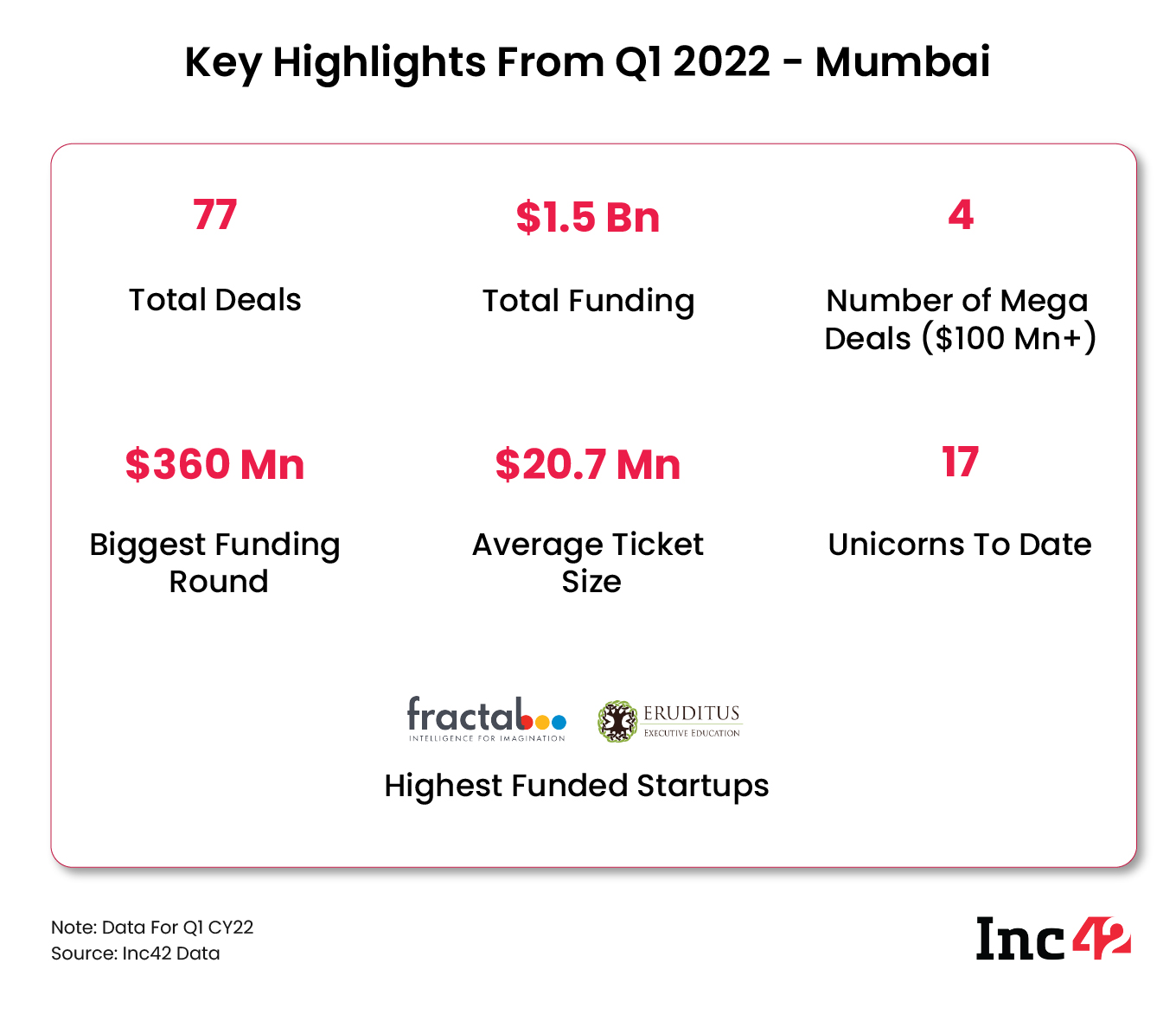 The state governments have been working to take startups to Tier 2 and 3 cities as currently most of the startups are concentrated in Delhi, Bengaluru and Mumbai.

However, Hyderabad, Chennai, Pune and Kochi are rising through the ranks to compete with the established startup hubs. According to Inc42 data, startups from Chennai raised $1.1 Bn across 26 deals in Q1 CY22, a YoY increase of 473%. Chennai is only fourth in the line after Bengaluru ($5.7 Bn), Delhi NCR ($1.9 Bn) and Mumbai ($1.4 Bn) in terms of funding raised. The city also minted two unicorns during the quarter – CredAvenue and Uniphore.

Chennai has been rising slowly and steadily with the support from the city’s regional entrepreneurship promotion cells and the support of the Tamil Nadu government. The state’s finance minister Palanivel Thiyaga Rajan recently announced an INR 50 Cr Emerging Sector Seed Fund and the establishment of Tamil Nadu Industrial Development Corporation (TIDCO) for INR 75 Cr.

Pune and Hyderabad also surprised the startup ecosystem during the first quarter of the calendar year 2022, showing a 653% and 329% YoY increase in funding raised, Inc42 reported.

Kerala’s Kochi, on the other hand, has been rising steadily, making its mark in the startup ecosystem with the support of the state government. Kerala has earmarked INR 22,500 Cr to promote entrepreneurship.