Air Travellers Can Now Get In-Flight Connectivity At An Altitude Of 3,000 Mts As the government focusses on Digital India, the idea has now spread across the skies too. The Telecom Commission, the highest body of Department of Telecommunications, has approved recommendations of TRAI (Telecom Regulatory Authority of India), thereby allowing air travellers to avail in-flight connectivity for both Internet and mobile.

This was tweeted by Union Minister of Commerce Suresh Prabhu who said: “Exciting times ahead in the Indian skies as Telecom Commission approves data and voice services in flights over Indian airspace!” 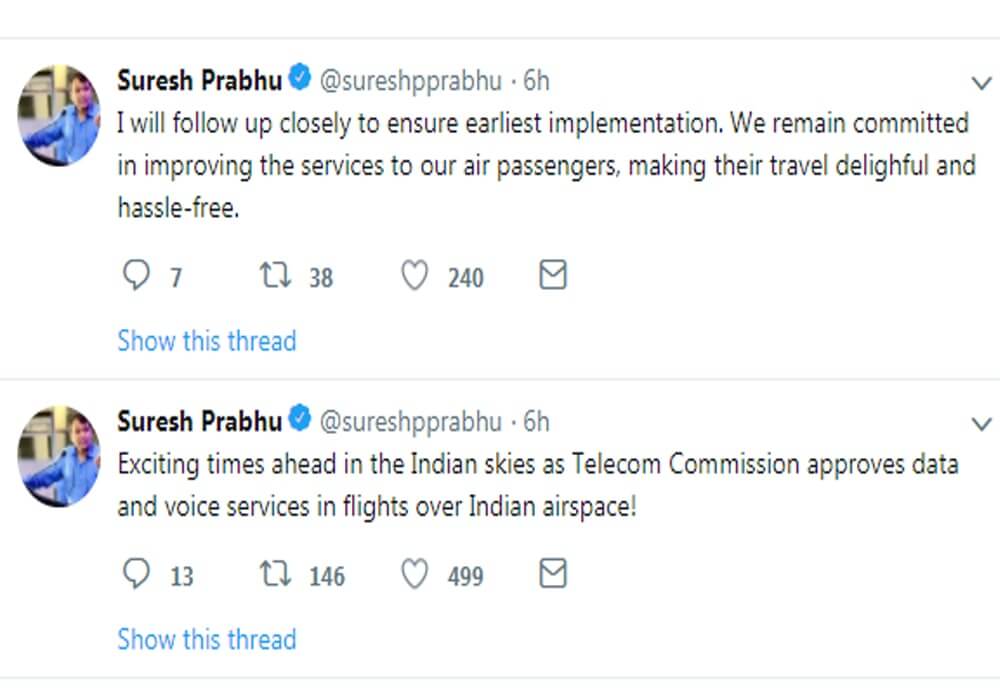 Furthermore, he added that he will follow up closely to ensure the earliest implementation as the ministries remain committed to improving the services for “air passengers, making their travel delightful and hassle-free”.

Telecom secretary Aruna Sundararajan told the media that the government will be working on the licensing framework for a special category of service providers called ‘In-flight connectivity provider’.

With this, Indian and foreign airlines can now offer services to passengers but only over the Indian airspace. However, airlines and the service provider can decide on the pricing. Also, it is to be noted that the Internet connectivity will be available when the flight is at the altitude of 3,000 metres.

Earlier in August 2017, DoT had sought recommendations from TRAI on licensing terms and provision of in-flight connectivity for voice, data and video services and associated issues related to the entry fee, licence fee and spectrum.

Along with in-flight services, the commission has also approved the recommendations of TRAI to boost public WiFi hotspots. The idea is to foster job creation by creating public data offices (PDO), which would be similar to the PCOs of yesteryears. These PDOs would offer sachet size data packs starting INR 2.

At present, there are 38K WiFi hotspots in the country, which DoT aims to make 500K by December. Also, a three-tier structure for grievance redressal will be created as the telecom ombudsman.

In July 2017, TRAI had announced plans to set up a hotspot WiFi network across the country, which will be an open architecture-based WiFi Access Network Interface (WANI). The ultimate goal is to develop a pervasive, technologically-sound, WiFi hotspot network that will help enhance data consumption among India’s price-sensitive population.

India witnessed a huge change in its Internet space with the arrival of Jio, which caused the number of India’s broadband subscribers to increase 52% in six months ending in February 2017.

As per TRAI data, over 89 Mn people in this group are coming online for the first time. In April 2017, Google’s VP for Southeast Asia and India, Rajan Anandan, said that nine out of every 10 new Internet users are non-English speakers.

A report titled ‘Mobile Internet in India 2017’ estimates the number of mobile Internet users in India to reach 478 Mn by June 2018. In the space where there’s no end to the addiction of phone, with increasing dependence on the phone for survival, the pros and cons of availability of Internet in the skies can be something to ponder upon.