Haptik Gets Times Internet As Strategic Investor; Hopes To Leverage Its 150 Mn User Base

Haptik Gets Times Internet As Strategic Investor; Hopes To Leverage Its 150 Mn User Base Marking the beginning of a strategic alliance, chat based personal assistant app Haptik has raised an undisclosed amount in its Series B funding from Times Internet. The funds will be utilised for for product development, improving artificial intelligence capabilities and business operations.

Aakrit Vaish, CEO of Haptik, stated, “ We started Haptik so that consumers could get the most out of their phones, without the huge learning curve of navigating hundreds of different apps. Ordering food or checking into a flight should be as easy as asking for it, and that’s what Haptik can do. With Times Internet as a partner, we’re excited to offer what we’ve built over the last two years to millions of consumers across India.”

Gautam Sinha, CEO of Times Internet, stated, “Haptik is a magical experience for consumers, and it’s part of a growing global trend towards chat-based commerce. They have great affinity amongst their current users, and we hope to help them continue to innovate on the service, while expanding their user base.” 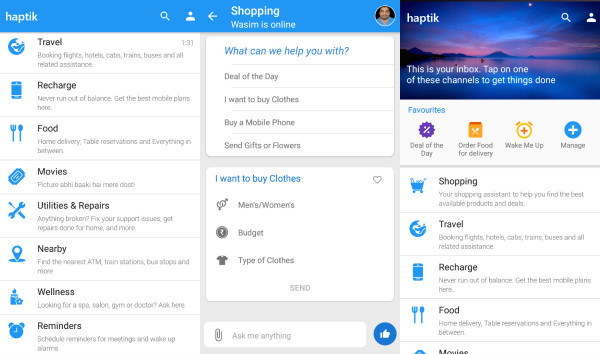 Haptik which now has been downloaded by over 1 Mn users since its launch in 2014, had earlier raised $1 Mn in seed funding from Kalaari Capital. It competes with other chat based assistants such as Lookup which now has 1.5 Mn users and collaboration with 87,000 stores as per founder Deepak Ravindran. Similarly, another player Helpchat headed by Ankur Singla has registered over 1.5 Mn downloads on Android and iOS combined and processes 90,000 requests per day.

The chat-based assistant apps are rapidly evolving to leverage Artificial Intelligence and Natural Language Processing (NLP) capabilities in order to ensure a better customer experience. Day by day, they are being explored by many startups to build their businesses.

Deepak of Lookup has already declared his ambition of making Lookup to be the Google equivalent for finding products and services offline. Chat-based assistants are using chat to disrupt local commerce in India, which as per Ravindran is a $750 Bn industry.

Consequently, investor money is also pouring in the sector. Just last month, Artificial Intelligence startup Yana raised an undisclosed amount of seed round funding from Hong Kong based investors led by Puneet Gupta of Goldman Sachs. Similarly, Gurgaon-based concierge service startup, JoeHukum, raised an undisclosed amount of seed funding led by TracxnLabs along with other angel investors including Jitendra Gupta-founder of Citrus Payments and Prashant Tandon-founder of HealthKart in December.

Meanwhile Helpchat has been funded by Sequoia and Trifecta Capital while Lookup counts Vinod Khosla’s personal fund Khosla Impact, Twitter co-founder Biz Stone, Narayana Murthy’s Catamaran Ventures and Global Founders Capital, the European investment fund from Rocket Internet’s Samwer brothers among others as its investors. No wonder, with India having one of the highest shop densities in the world and over 45 Mn local businesses, the chat-based commerce is a hot category to watch out for.