JARVIS, Watch Out! Chat Based Personal Assistance Apps Are Catching Up Fast

JARVIS, Watch Out! Chat Based Personal Assistance Apps Are Catching Up Fast 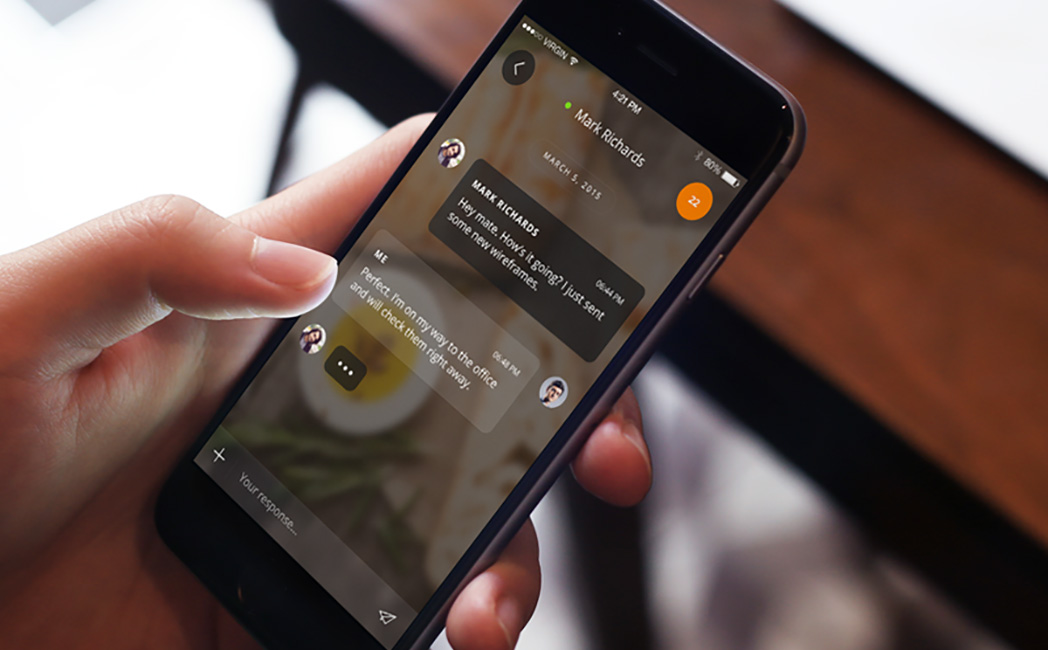 From booking hotels and cabs, to delivering your groceries, to letting users set up reminders for personal responsibility, meetings, tasks or reminders, chat-based assistants are now organising our lives like our very own personal assistants. No wonder, every day they are becoming more and more adept at understanding and processing handling all sorts of possible requests a human being could make.

The chat-based assistant apps are rapidly evolving to leverage Artificial Intelligence and Natural Language Processing (NLP) capabilities in order to ensure a better customer experience. Be it locating a restaurant serving roasted prawns or mobile recharge, these apps are decoding millions of human messages every day to gather user preferences and predict requisite solutions. The latest advancement towards this direction is assistants using machine learning to even predict weekend plans for their users.

Consider for instance, it is one of those Saturdays where you haven’t planned out anything for yourself. You turn to your virtual assistant like Helpchat which could recommend you a movie to watch, a restaurant to have lunch. It then goes further to book a cab for you, suggests you a congestion free route, and even fetches special deals on your credit card. And all this can happen in the time between you shower and dress for your weekend outing.

Sounds futuristic but it hardly is, given the fact that now as mobile apps inch closer to ensuring instant gratification, they are also  getting better at two very crucial aspects- prediction and personalisation. Both factors can make key contributions towards creating a virtual assistant that predicts users’ needs intelligently and gets things done.

So, how are chat based assistants getting better and better at predicting a user’s personal preferences? For this to happen, two things are being done by chat based assistants such as Helpchat. Firstly, Helpchat has tied up with businesses ranging from tech support and recharge to travel, food delivery and more, and is further opening up its platform for API integrations (technical integrations) to businesses. Alongside this, state-of-the-art machine learning and artificial intelligence techniques are drawing data from signals collected during user interactions with the app.

Bots with NLP capabilities gather this data, which includes everything from daily chores to personal preferences. The app keeps a note of everything  whether you are vegetarian, if you own a pet, what phone you use and so on. Once data gathering is complete, machine-learning models like neural networks crunch data to predict where, when, and how you need help. The service layer then taps the business partners needed to meet your requirements. Just as a human assistant recognises the employer’s needs better with practice, the app too predicts and meets your needs more efficiently as your interactions with it increase.

Says Vishal Choudhary, CTO of HelpChat, “The system learns from example as it chats with people all of the time. When a customer is challenging, the system will try to find out his preferences. Is he a past user? If he is, the system has that intelligence already to tap into to suggest and predict personal preferences. If he is a new customer, it will try to elicit further information to suggest options based on your location.”

A vast knowledge base and word sense disambiguation tools allow the bots to understand user context in chat conversations, while built-in NLP queries fetch the most relevant data. Publicly available datasets such as Wikipedia and Freebase, specific data crawled from relevant web pages for instance popular review and news articles, and specialized data sets maintained by third-party websites are used to update the knowledge base.

The requirements received on the platform are vastly different, ranging from information on train schedules, help with locating a laundry service, or an app to carry out an instant mobile recharge. So how does Helpchat understand them? This is done by practice. It has already analysed tags on 10 million chat messages which allows it to find meaning, patterns, or relevant information. The task is complex, but bots have been able to achieve a significant level of success., “ About 86% of the queries are handled by bots. The better the customer experience becomes, the faster we can let the system to let completely take over,” Vishal adds. Currently, the noun and intent detection accuracy is already high at 60%, but the aim is to reach 90% before release to the public.

Challenges aside, the app already has a queuing system in place, so that each message is analysed, classified, and responded to right away. The current response time could soon drop to less than 400 microseconds. Meanwhile, Helpchat’s coupon bot is ready for public release over the next few months. Vishal said that  food is going to be their another focus area, followed by location based shopping. In September, Helpchat acquired Mumbai-based startup Niffler that helps users to discover deals and discounts from brick and mortar stores.

With Helpchat coming up with more innovations such as helping you plan for the coming weekend, competition in the chat assistant category with further heat up. A look at other assistants shows that the category is slowly becoming the next hot thing. This September, Lookup has collaborated with budget-hotels marketplace OYO rooms, allowing guests to discover and book OYO hotels by just texting.  Similarly, it announced launch of hyperlocal deliveries across Bangalore, Mumbai and Delhi in association with Roadrunnr. Any store keeper who wishes to provide deliveries, can now do so when they get an order through Lookup.

Similarly, upping the ante in personalisation, another player Haptik has launched a new channel on its platform called Reminders and Wake Up Calls. The new feature that lets users set up reminders for personal responsibility, meetings, tasks or reminders. And also request for a wakeup call!

Where Will We See Chat-Based Assistants In The Next Five Years?

Vipul Aggarwal, Co-Founder of Goodservice, believes it is a product that will be used by millions of people every day; it should be a part of people’s lives and helping them live a better life. He claims to be already witnessing such behaviour among Goodservice’s current users.

According to Aakrit Vaish, CEO of Haptik, chat or messaging apps are the most native and convenient experience on mobile. An avid mobile app user spends more than 70% of his time on a smartphone on a messaging app. The space is still evolving, but over the next five years chat-based personal assistance will become the one-stop shop for all work/tasks that need to be accomplished on mobile. What are called apps today, will fundamentally become buttons within a messaging interface.

Ankur Singla, CEO of Helpchat believes it’s just the beginning. “The continued evolution of mobile messaging is a direct result of how messaging apps have transformed our use of mobile devices. The voice call has given way to the message and mobile web users are increasingly choosing to message rather than browse. Exciting times lie ahead!” The world of tech startups seems to be coalescing around how messaging will be the big Meta trend for the next three to four years. In the coming years, expect to see smarter and more intuitive messaging that offers a wider range of functionalities and powers higher customer engagement than ever before.

Deepak Ravindran, CEO of Lookup believes that “ Day by day much people are discovering that chat platform is not just a world in which they can interact with people, but also a platform for accomplishing various day to day tasks. Chat based personal assistant apps use one single platform. It is being explored by many startups to build their businesses. It is very appealing for they could solve the ever existing problems of miscommunication, time lag and several other redundancies through chat.”

Chat-based applications such as WeChat in China, Magic in the US and Whatsapp are gaining traction. And though the future looks promising with more and more people turning to them as a way of life, challenges in terms of geographical expansion and quick servicing, scaling and natural language processing abound in the way of chat based assistants.

A Quick Look At The Challenges As Foreseen By The Players 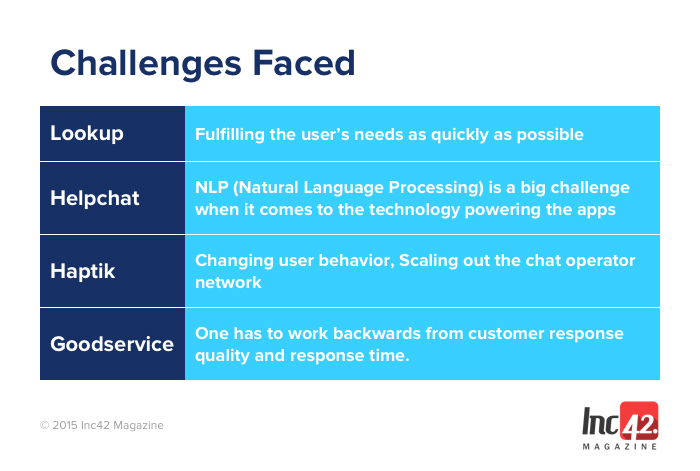 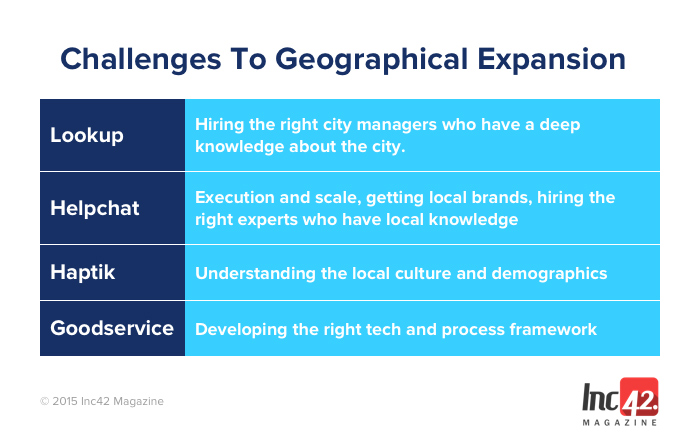 The players are following a mix of monetisation models ranging from a per lead fee, to commissions on transactions, and ad revenues. 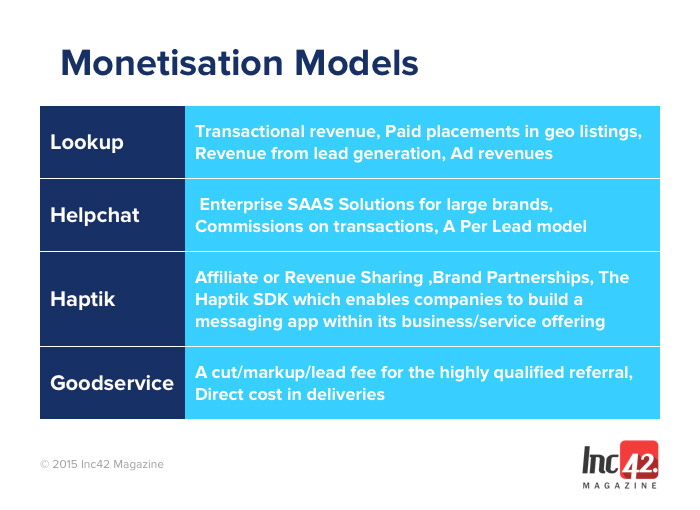 A quick look at the number of downloads, chat sessions, average response time, and number of merchants gives an idea about the increasing popularity of chat-based assistants, powered with the rising surge of hyperlocal commerce and home services sector. 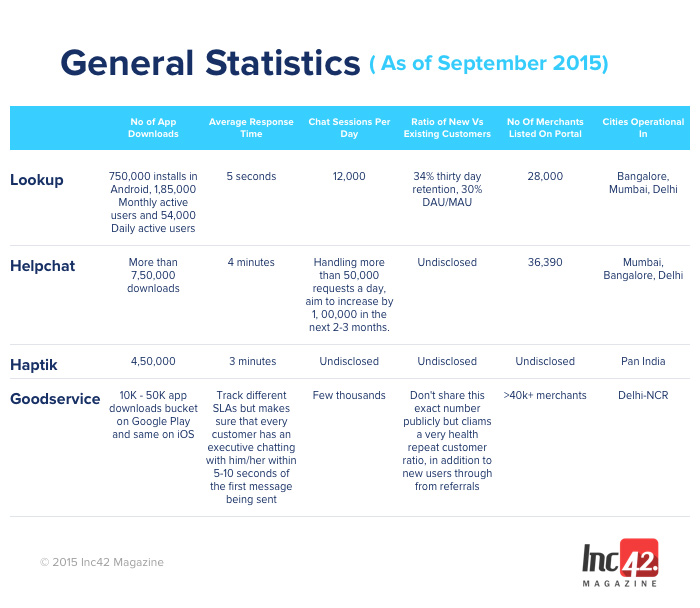 The last few months have seen increased funding pouring in the sector. Helpchat raised over $16 Mn (INR 100 Cr.) in Series B round led by Sequoia in May, 2015. Previously, it had  raised $5 Mn in from existing venture investor Sequoia Capital in July 2014. The startup has previously raised INR 1 Cr from Sequoia in a seed round in September 2011. Just a week ago, it picked up an undisclosed amount of funding from Gurgaon-based venture fund, Trifecta Capital Advisors LLP.

Lookup raised two rounds this year. In October, it raised $2.5 Mn in Series A round of funding. The round was led by Vinod Khosla’s personal fund Khosla Impact which also saw participation from Twitter co-founder Biz Stone, Narayana Murthy’s Catamaran Ventures and Global Founders Capital, the European investment fund from Rocket Internet’s Samwer brothers. Earlier this year in January, it raised a total INR 2.4 Cr. in seed round of funding which included Japanese investors DeNA Co and Teruhide Sato, who is the CEO of Netprice, MKS Switzerland SA, and Infosys co-founder Kris Gopalakrishnan.

Haptik meanwhile raised $1 Mn in its first round of funding led by Kalaari Capital in September last year. Similarly, Goodservice has raised $1.6 Mn in a funding round led by Sequoia Capital in June, 2015. 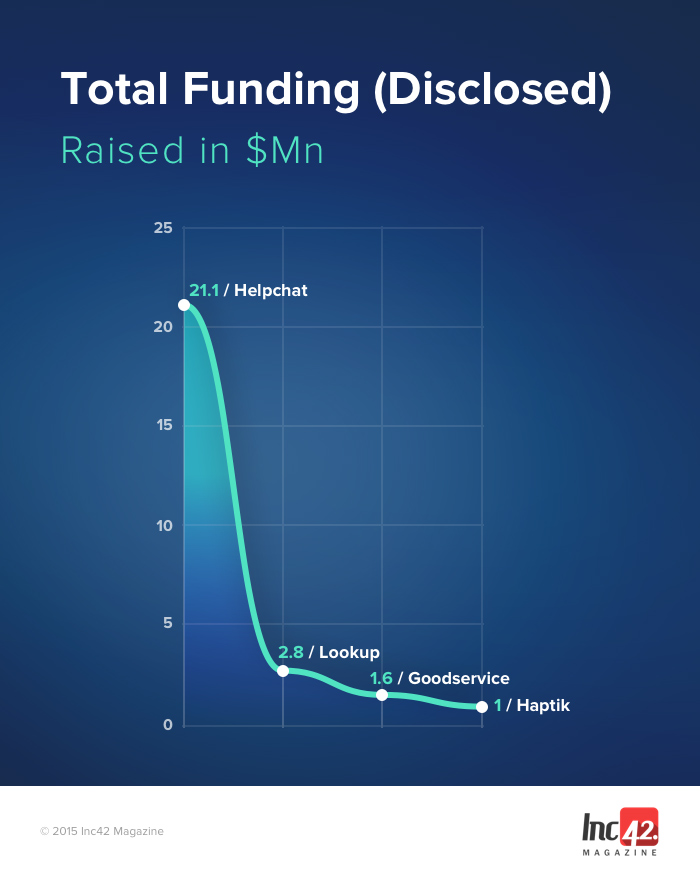 Currently, as Vipul puts it, all players are focused on customer acquisition and building a product which is the first choice of customers when they need any service or product. As per Aakrit, it’s too early to call any winners or say how many will hold their ground. It is expected to pan out like the e-commerce market where there will be three-four big players, and a lot of small ones.”

Says Deepak, “The competition is equally tough and the basic idea is it doesn’t matter who initiated, it depends on how they execute it according to people’s needs. So the personal assistance apps that blend to the technology and keep upgrading themselves will survive in the long run.”

Helpchat’s Ankur too agrees all players are trying to expand this ecosystem, by bringing in more users into the category, and it is difficult to predict the number of players that will survive.

However, as with the signs in the other overcrowded industries, chat-based assistants too will soon see a consolidation phase. Case in point is the acquisition of Niffler by Helpchat. Incidentally, last month Helpchat also fired over 100 employees. These largely (over 70%) comprise of contracted employees and consultants in brand management, who work from home on monthly-payment basis. However, the startup believes this is not an unusual layoff, but part of the ongoing business transformation.

Whether this holds true or not, will be revealed in the coming times. Riding high on the backing from Vinod Khosla, Deepak of Lookup has already declared his ambition of making Lookup to be the Google equivalent for finding products and services offline. Chat-based assistants are using chat to disrupt local commerce in India, which as per Ravindran is a $750 Bn industry.

No wonder, with India having one of the highest shop densities in the world and over 45 Mn local businesses, the chat-based commerce is a hot category to watch out for.