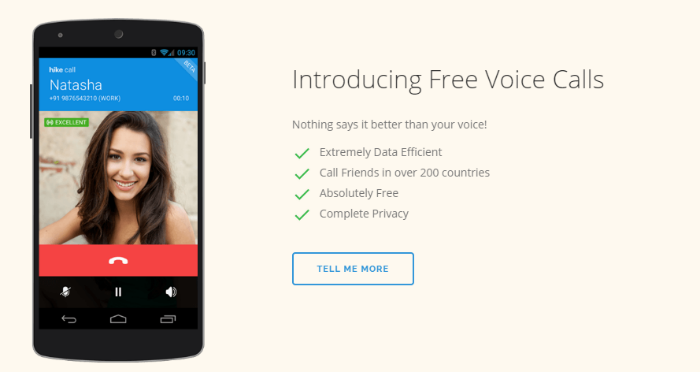 After acquiring US-based voice-calling Zip Phone earlier this month with undisclosed financial details, following this development we knew that Hike Calling was around the corner and this was confirmed on Wednesday when he company rolled out free voice calling on its Android app. Other OS users will get ‘Hike Calls’ by the end of Q1 2015

The company claims that voice calls are optimised to consumer very little data, giving users more calling minutes per  MB of data. Given that majority of the mobile internet users of India are still in experimental mode and are not using a high-bandwidth connection this optimisation becomes critical.

Kavin Bharti Mittal, founder and CEO of Hike messenger said,”While building free Hike Calls, we kept two things in mind. Firstly, India is a very cost sensitive market and as a result we’ve ensured that our service is extremely efficient on data. It means our users can pack in more minutes per megabyte when calling on hike. Secondly, we’ve made Hike’s free calling service available globally in over 200 countries. Hikers from India can now speak with their loved ones in India and across the world for free.”

This feature comes at a time when mobile operators are demanding to VoIP calls should be brought under regulation. Last month, Airtel announced its plans to levy charges on Skype and Viber calls which was taken down after a social outcry on the company’s outrageous move.

Whatsapp Calling is also taking rounds of rumors but Hike calling now has an edge over it which makes us ecstatic that an Indian Company has ‘hiked’ over Whatsapp. Hike should focus on delivering facilities to retain its current user base and add more to it. As soon as whatsapp will launch its calling feature users will not hesitate to shift if they find it better.