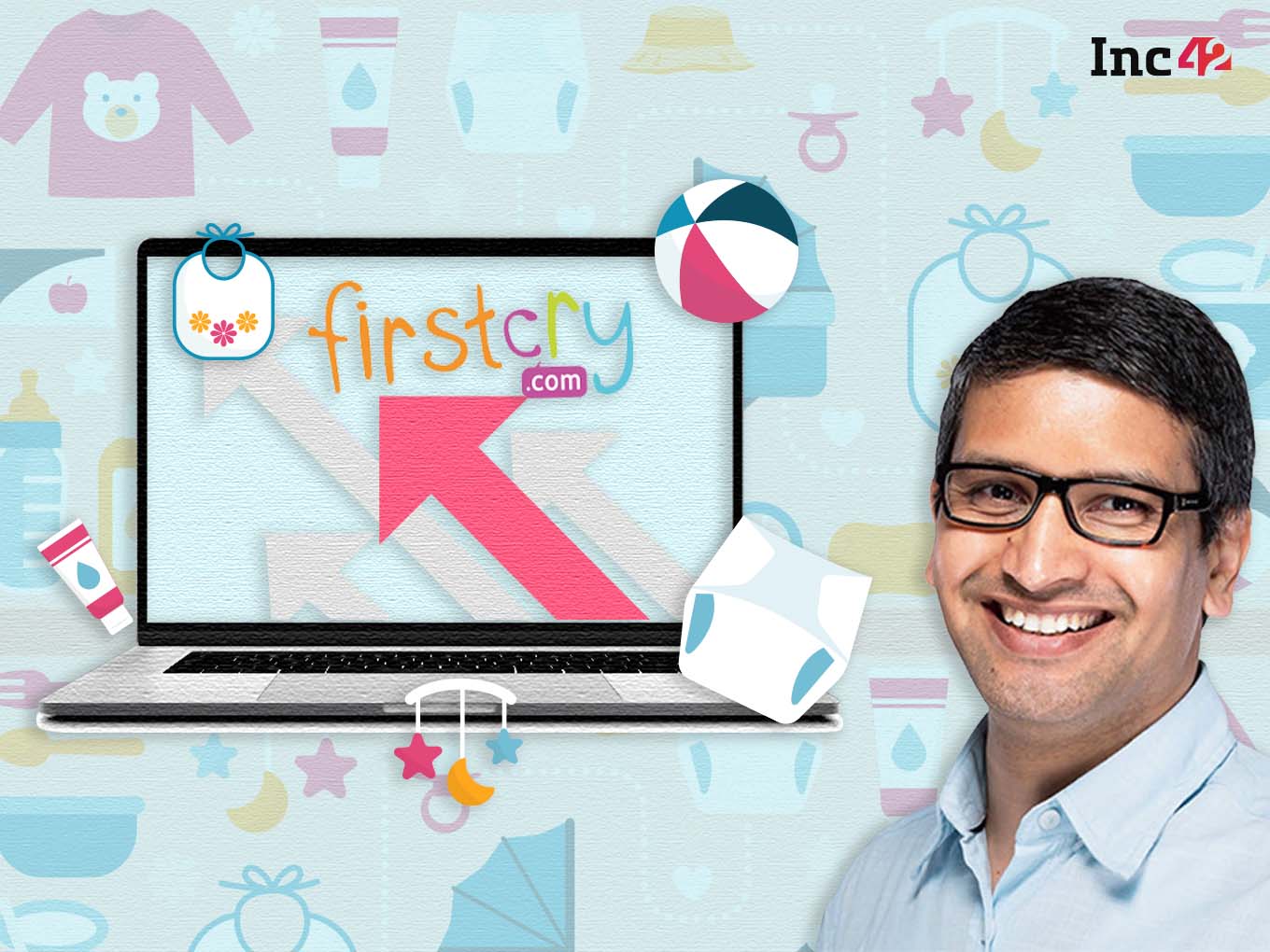 Supam Maheswari-led omnichannel baby & kids marketplace FirstCry has turned profitable in the financial year ending on March 31, 2021. The Pune-based ecommerce player posted a profit after tax of INR  215.94 Cr in FY21, a significant jump from INR 190.8 Cr of loss it had incurred in FY20.

FirstCry’s consolidated total revenue soared to INR 1,740 Cr, a 141.3% rise from INR 896.7 Cr it generated during the same period in the previous financial year. 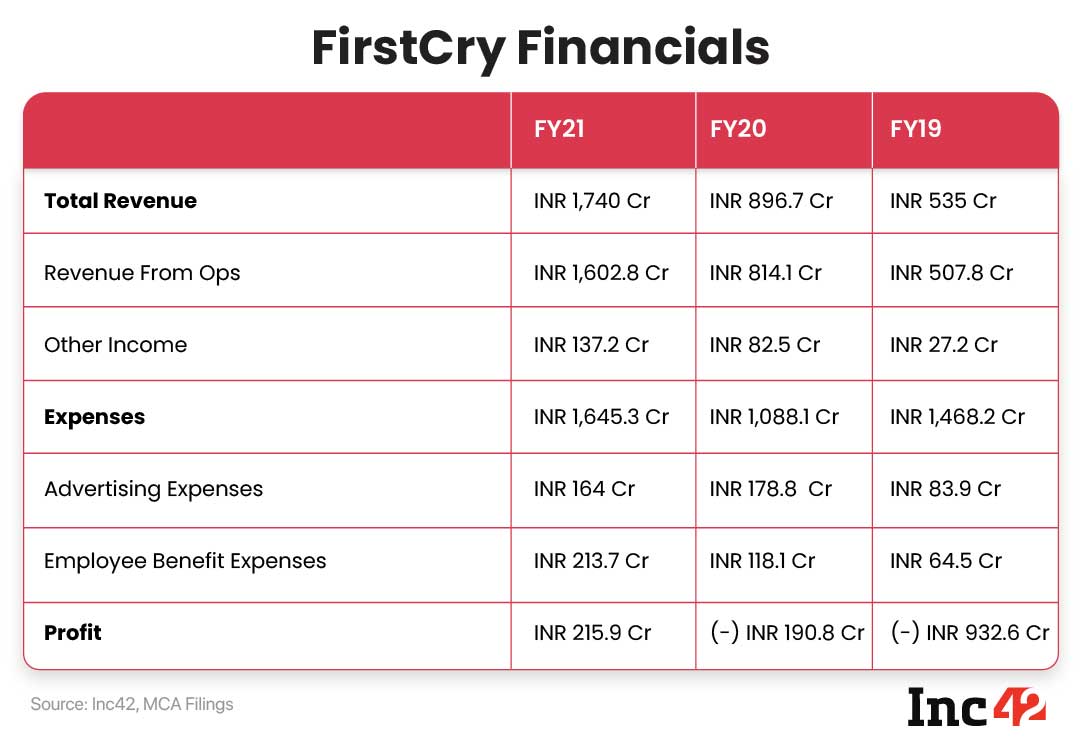 FirstCry which sells newborn, baby and kids products such as toys, clothings, footwear, and accessories, among others, saw its revenue from operations cross INR 1,600 Cr mark in FY21.

FirstCry’s other income which comprises interests on fixed deposits and current investments was at INR 137.2 Cr, thus taking the total income to INR 1,740 Cr in FY21. FirstCry’s EBITDA margin stood at 10.5% .

The increase in sales mostly could be attributed to the onset of the pandemic. As the pandemic compelled the Indian government to impose lockdowns, more and more people moved to ecommerce to rely on their day to day purchases.

The domestic ecommerce industry which is mostly led by Flipkart and Amazon witnessed a rise in the form of many first time customers during this period.

The same could be said for FirstCry, which doesn’t claim to sell from A to Z requirements of every household, but rather focuses on niche segments-newborn, baby and kids products.

Riding on the lockdown-driven online shopping trend and aspirational needs, there is a surge in new age parents from Tier 1 and 2 cities wanting branded products, and players like FirstCry fit the bill here.

FirstCry claims to have an user base of over 4 Mn.

As the total revenue rose, so did its expenses. In FY21, the startup’s total expenses shot to INR 1,645.3 Cr. Employee benefit spending formed the lion share of FirstCry’s expenses in FY21. Of the total INR 1645.3 Cr expense, INR 213.7 Cr was for its employee benefit expenses.

Salaries, gratuity, contribution to PF, and ESOPs among others majorly make the employee benefit expenses. In FY20, the startup had spent INR 118.1 Cr for the same.

It has to be noted that FirstCry has been generous when it comes to ESOPs. In October of 2020, the startup had bought back ESOPs worth INR 31 Cr from its employees, thus creating wealth for its staff.

Earlier this year, Inc42 had exclusively reported that the startup further created an ESOP pool of over $100 Mn.

Apart from employee benefit expense, another major reason behind the rise of FirstCry’s expense is its expenditure on promotional activities. The startup has spent INR 164 Cr for advertising promotional expenses.

However, it must be highlighted that the startup had a higher promotional expenses of INR 178.8 Cr in FY20.

Founded in 2010 by Supam Maheshwari and Amitava Saha, FirstCry offers different categories of baby and kids products from clothing to other essentials.

The startup boasts of having an online presence along with a retail footprint of over 300 stores across 125 cities. The Pune-based startup claims to offer 200K baby and kids products across 2,000 brands.

FirstCry entered the unicorn club in 2020 after raising $296 Mn in its Series E round from Japan’s SoftBank.

Further, it is eyeing for an IPO late this year and has already roped in Kotak Mahindra, Morgan Stanley, among others.

After the devastating market debut of Paytm, for startups, achieving profitability seems to be one of the primary conditions that needs to be met before going public. New Delhi-based headphone maker boAt is another example of a profitable startup going for an IPO.

In a latest development, FirstCry, which was to receive investment from the country’s sovereign fund National Investment & Infrastructure Fund (NIIF) has now called off the deal. NIIF was supposed to buy SoftBank’s shares in FirstCry. However, now Premji Invest is expected to step in and buy the stakes at $2.7 Bn to $3 Bn valuation.

It has to be noted that FirstCry’s logistics spun-off company XpreesBees also entered the unicorn club earlier this year after raising $300 Mn from TPG and Blackstone.