Exclusive: Reliance Is Acquiring Haptik For Over INR 200 Cr To Build India’s Own Alexa

Exclusive: Reliance Is Acquiring Haptik For Over INR 200 Cr To Build India’s Own Alexa 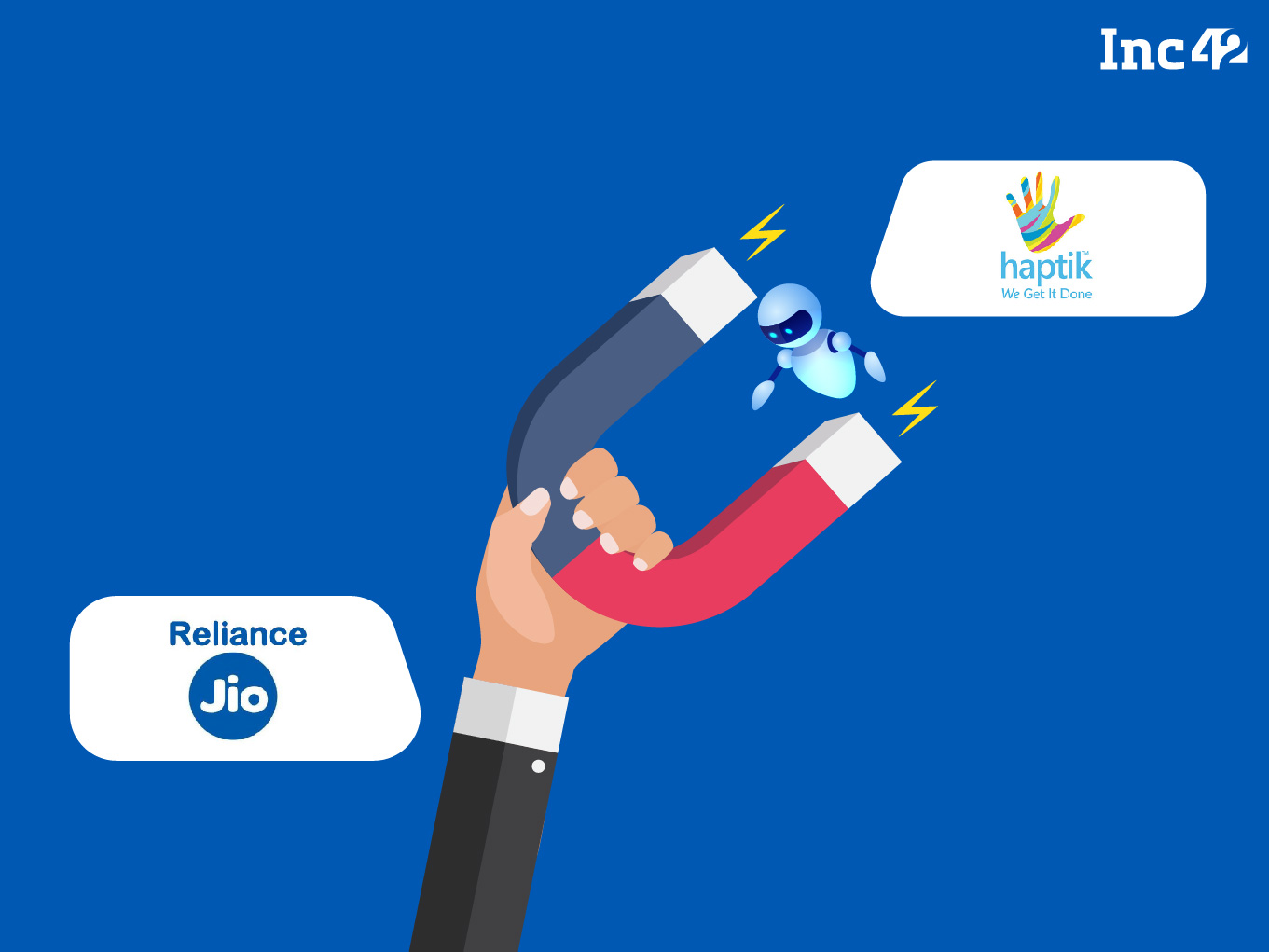 The transaction is expected to be completed this week

Reliance Jio is acquiring chatbot maker, Haptik for over INR 200 Cr, to build its own conversational platform on the lines of Amazon’s Alexa, a source close to the development told Inc42.

The transaction is expected to be completed this week. Haptik had last raised $11.2 Mn and counts Times Internet and Kalaari Capital as its investors.

Queries to Haptik over mail and messages did not elicit any response till the time of publication.

According to a company document accessed by Inc42, the company founders have signed the board resolution in an EGM earlier this month regarding the deal. According to the document, Reliance Jio Services Ltd, Haptik founders — Aakrit Vaish and Swapan Rajdev have signed a Business Transfer Agreement.

Haptik: The Power Of Bots

Founded in 2013 by Aakrit Vaish and Swapan Rajdev, Mumbai-based Haptik lets users chat with their voice assistants to complete daily tasks such as online shopping, travel bookings, food delivery among others. The company signed a strategic partnership with Times Internet in April 2016 to further develop its product and improve its AI capabilities.

The company has worked with over 50 brands such as Samsung, Future Group, OYO and KFC. One of the unique points for Haptik as its cofounder Ashish has shared earlier, is that every single chatbot built on the Haptik platform is 100% customised, and all of the customisation is done by its in house professional services team. The company expanded to the US in 2018 and the UK in 2019. It is now looking to focus on English-speaking markets in the coming years.

Is Reliance Preparing To Take Over India’s Internet?

Last year, Reliance merged its Jio Music business with the music streaming app, Saavn, at a combined valuation of $1 Bn.

In light of Haptik’s acquisition, it looks like Reliance is gearing up to create a complete ecosystem of products similar to Amazon Alexa’s ecosystem built for Jio’s vast subscriber base.

In February this year, the Reliance also acquired a vernacular language technology development company, Reverie, picking up 83% stake in the company in a deal worth INR 190 Cr.

Jio’s reach and connectivity and Saavn’s audio streaming technology can now be leveraged along with Haptik and Reverie’s abilities to create a challenger to Alexa and Google Home, albeit with better regional language support.

Reliance itself has hinted at a similar objective earlier. In its press release announcing the acquisition of Reverie, the Mukesh Ambani-led company said that the investment would “further enhance the group’s digital initiatives including digital consumer platforms with multilingual capabilities.”

Meanwhile, Amazon has employed a staggering 40K developers to develop Alexa’s regional language skills, while Google Home is now available in four Indian languages with seven more in development. The battle for India’s next billion users is definitely heating up!

Speaking of Jio, in 2018, it witnessed a massive user growth in contrast to its competitors as well as prominent players like Airtel, and Vodafone. The average percentage change between (January’18 – November’18) for Jio was +4.92 % whereas in the case of Airtel and Vodafone it has been +1.6% and -0.12% respectively. These numbers show that the penetration strategy focused on providing high-speed internet at low cost has turned out to be a success story for Jio.

Acknowledging the booming Indian economy, Reliance is now gearing itself up for optimal capitalisation of the digital data which they have gathered with their Jio product including DTH, mobile wallet and more.

As of 2018, India’s internet user base was estimated to be around 560 Mn, which is just 41% of the total population of India. As more and more people go online, it’s an obvious fact that they will be prone to start using integrated vertical services like payments and entertainment.

After establishing a successful strategy to capture new users coming online through Jio, it looks like Reliance is now bullish on capturing the complete digital entertainment space, the first thing most new internet users consume, as well as leverage the innovation capabilities of Indian startups to further its technological ambitions. The company has backed over four Indian startups in 2019 alone.

Gauging from Reliance’s new found interest in fintech, ecommerce and retail, which are currently the fastest growing sectors of the Indian economy, the company’s latest move shows that it is now fully prepared to takeover the Indian internet.