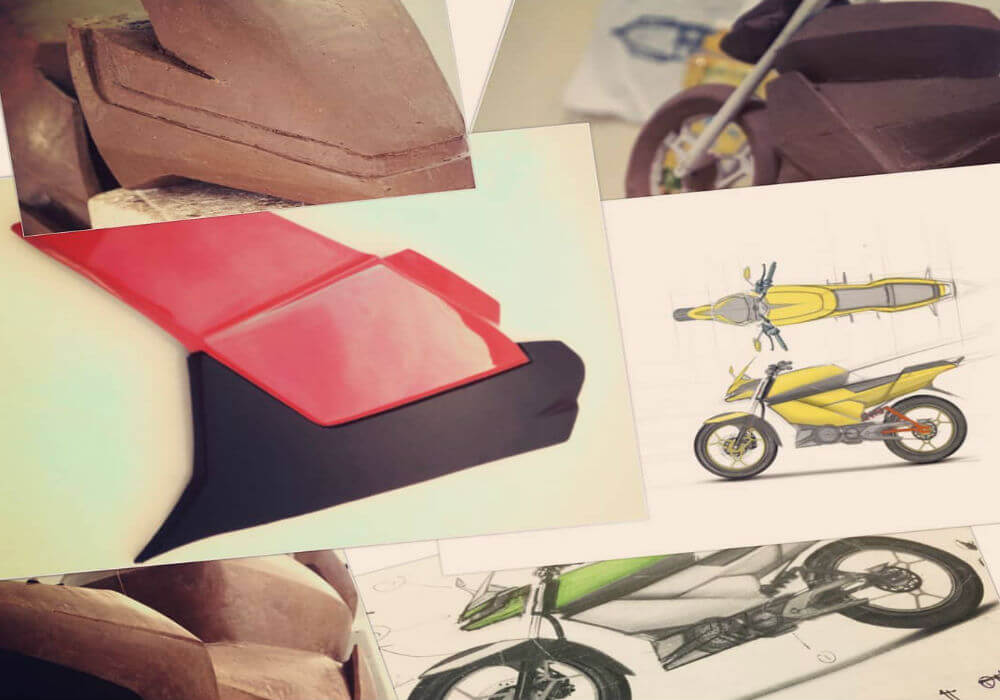 eMotion Motors was established in 2011 by Pranav Singanapalli. The startup wants to combine the passion for high-performance vehicles with a forward-thinking desire for clean and efficient energy sources.

The name eMotion comes from the fact that the motion is powered electrically. Second, it also refers to ’emotions’, which sets humans apart from robots. “At eMotion Motors, we don’t look at our product based on its specifications, but we look at how good it is for people and connect with them. The company aims to thus revolutionise the concept of electric vehicles,” said Pranav.

eMotion Motors has so far been operating under the radar and is now set to unveil the first look of electric motorcycle Surge — its pre-production prototype. Prior to Surge, Pranav showcased his first prototype at the Vibrant Gujarat Startup Summit in October 2016, which could reach a maximum speed of 92 kmph, had a charging time of 1.5 hours, and offered a range of 78 km per charge on road.

Surge: The Journey So Far

With eMotion Motors, Pranav Singanapalli, a product designer and a science enthusiast, wanted to bridge the gap between existing electric vehicles that are seen as ‘scooterettes’ with basic features, low power, low range, and the fun and comfort of automobiles.

Working as a product designer in Sunray Design Studios, Pranav initially ideated the concept of high-performance electric motorcycle and worked on it parallelly in 2011. Later, in order to expand his skill set, he also gained master’s degree in multidisciplinary design innovation from Northumbria University, Newcastle.

One of the primary things that inspired Pranav to venture into this startup was his past experience with his own e-bike. Seeing how the earlier generation of e-bikes lacked imagination, how they did not live up to their intended potential, how impractical they were, and the fact that they were simply kits imported and assembled from China, Pranav felt the industry was too lazy in terms of product development and innovation.

As he stated, “For all the benefits an e-bike can offer, their potential was severely underutilized. There were many brands, but there was not a single differentiating factor. Not many e-bikes could go past 25kmph, with only some exceptions.”

Thus, Pranav then designed and developed an electric motorcycle that could go toe-to-toe with an IC Engine-powered bike and that was designed with the consumers’ need in mind. The idea was to deal with all the shortcomings of obsolete e-bikes and break all the preconceived notions about e-bikes, like them being slow and always on the sidelines.

Pranav decided to bootstrap initially and involved himself fully in the startup and its e-bike Surge is now inclined to hit the Indian roads by 2020. The startup, which will unveil the prototype on their website today has plans for three offerings in various two-wheeler segments in the coming years.

Tech Aspects And A Glimpse Of The Features

Surge will currently be available in two variants, with the top variant clocking a top speed of 120Km/hr and a rapid acceleration of 0-60Km/hr in less than four seconds. The bike will have smart features such as LED Backlit Display, GPS Navigation, Mobile phone integration, Cloud connectivity and IOT features for an enhanced user experience.

The bike is also claimed to have many firsts in the 2-wheeler electric segment. Being India’s first geared electric motorcycle, it gives high torque multiplication at the wheel for riders providing high acceleration of conventional motorcycles. Further, the Reverse gear feature allows the users to manoeuvre in narrow roads and while parking, as explained by Pranav.

Further, the boost feature allows riders for pushing extra power to the motors for a short while and also offers a large cabinet space which can store more than just a helmet.

“This gives it a distinct advantage over the majority of current electric two-wheeler, which are low-powered, with cruising speeds of 25 Km/Hr and a recharging time up to 6-8 hours. Surge will run for 100Km in a single charge, with express charging getting the battery from empty to full charge in just 30 Minutes,” he added.

He also highlighted that Surge indicates the company’s focus, ‘design for desirability’, each and every feature has been designed and included with both the rider and the environment in mind.

“With the revolutionary photocatalyst coated wheels, Surge could also be termed a “Negative Emission Vehicle”., the vehicle was designed from the Ground-up in order to create the best possible product unencumbered with the design legacy of existing vehicles. The exciting part is, Surge can easily storm past a similarly-powered IC engine vehicle,” he added.

Surge: A Look At The Specifications

The Road Ahead For Surge

The air is set to be cleaner with electric vehicles coming to Indian roads and with the government pushing for all-electric transport by 2030. For the faster adoption and manufacturing of electric (and hybrid) vehicles, the Union budget 2018 has also allocated a sum of $40.5 Mn (INR 260 Cr) to support market development of hybrid and electric vehicles (EVs).

However, despite the hype created around EVs, the Indian government is still struggling to frame clear guidelines and policies around the electric vehicles.

There are still concerns about bare features, low power, and low range, with only benefits appearing to be having less or no pollution and questionable total cost of ownership. Also, there are concerns about setting up the charging infrastructure in place.

But it seems the Indian startup brigade has been motivated enough to bring this change on the Indian roads. Along with eMotion Motors, other startups who have already joined the two-wheeler EV bandwagon include the likes of Hero Electric Optima Plus, Avon E Scoot, Hero Electric Cruz, Ather Energy and Emflux Motors amongst others.

The startups are working hard to overcome all the glitches in the existing models of two-wheeler electric vehicles. As per TechSci Research, the Indian electric two-wheeler market is forecast to grow at a CAGR of more than 23%, during FY2018E–FY2023F. And as eMotion Motors founder Pranav states, “Using electricity for transport does not have to be a compromise in terms of performance and we hope to be among the pioneers of popular, high-performance electric vehicles in the country.”