Important Developments From The World Of Electric Vehicles [13-20 July, 2018] 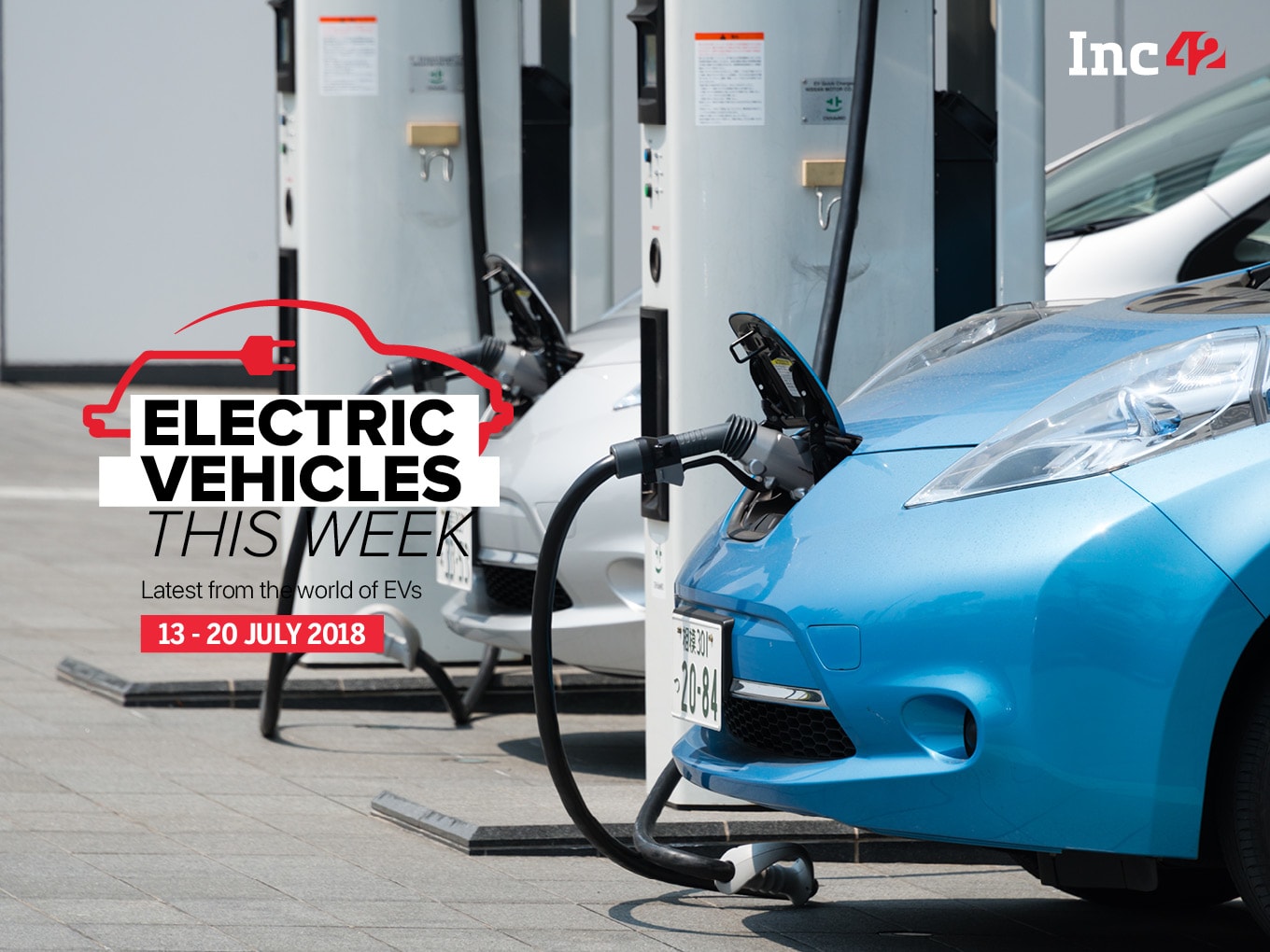 Only a week after Niti Aayog announced to instruct Indian states to reduce carbon emission through use of electric vehicles for public transportation, the government think-tank revealed a 15-point action plan ‘Breathe India”. It has identified 10 most polluted cities to implement the provisions aimed at addressing the air pollution problem.

The move coincide with the report by the World Health Organization (WHO) which revealed that 14 of the 20 most polluted cities in the world are in India. Emissions from India’s transportation sector alone contributed 87% of the total 188 MT of CO2 emitted till 2010. The report highlights electric vehicles can be game changers. EVs are at least 3 to 3.5 times more energy efficient than the traditional internal combustion engine (ICE) vehicles.

We bring all these developments to you in the 32nd edition of Electric Vehicles This Week.

Government think-tank Niti Aayog has developed a 15-point action plan called Breathe India for the 10 most polluted cities in India, aimed at addressing the air pollution problem to phase out private petrol-and diesel-fueled vehicles by 2022.

Once the campaign is approved and implemented in the identified cities –Kanpur, Faridabad, Gaya, Varanasi, Patna, Delhi, Lucknow, Agra, Gurugram and Muzaffarpur –it could further be replicated in other parts of the country.

Isro-developed lithium-ion battery Vikram Sarabhai Space Centre (VSSC) has attracted the interest of more than 130 firms in the technology. The development is expected to spur high on the country’s move towards electric vehicle technology. The battery has been successfully tested and is in use in space missions.

Its application horizon was further expanded by demonstrating 500 Ah and 100 Ah capacity cells in automotive applications. The technology’s entry into the automotive and aerospace sector will add impetus to the zero emission policy, VSSC said.

Maruti Plans To Onboard Lithium-ion Batteries For Its Cars

Suzuki Motor Corp plans to fit lithium-ion batteries in cars sold by its unit Maruti Suzuki India Ltd, such as Swift hatchback and all models, starting FY21. These batteries are said to be sourced from its upcoming Gujarat battery plant being set up by Suzuki in a joint venture with Toshiba Corp. and Denso Corp. at an estimated investment of $167 Mn (INR 1,152 Cr).

“This move would give Suzuki economies of scale since Maruti sells 50% of the total cars in India. Even if they manage to fit 1 Mn with lithium-ion batteries, it will be huge in number,” people familiar with the development said.

Tesla CEO Elon Musk has shown an interest in visiting India in early 2019. Musk was responding to one of the tweets by Pune-based user. He was also seen referring to his meeting with Prime Minister Narendra Modi at Tesla headquarters at Palo Alto, California, in 2015.

Musk later stated, “Prime Minister Modi and I talked about electricity generation and how there are ways to skip ahead with it as with cellphones.”

In his earlier Twitter posts, Musk tweeted, “Deepak Ahuja, Our CFO, is from India. Tesla will be there as soon as he believes we should”.

Indian businessman Chetan Maini-led start-up SUN Mobility plans to set up the first batch of its battery-swapping stations for electric two and three-wheelers across the country in the last quarter of this fiscal.

The Bengaluru-based startup, specialising in designing innovative solutions for electric vehicles, will deploy test stations in the field in the next couple of months since the technology has been developed. “In the last quarter of this year, we will put 50 to 100 of them out there,” Maini said.

The stations, which use modular batteries suited to the entire gamut of EVs, will be set up at existing bus depots across northern India to cater to e-rickshaws and in southern India to charge electric two-wheelers.

Bike-sharing platform Mobycy is in talks to raise $3 Mn with Venture Catalysts, IDG Ventures and Orios Venture Partners, as it plans to foray into e-bikes and e-scooters sector. As per company’s chief executive Akash Gupta, the platform is currently making 7,000 rides per day and expects it to double in the next 1-2 months.

Founded in 2017 by Gupta and Rashi Agarwal, the Gurugram-based startup enables dockless bicycle sharing. The company piloted with 30 electric bicycles about 1-2 months ago and expects electric vehicles to accelerate their business further.

Hyderabad-headquartered Tronx Motors, a Smartron company, has announced the launch of a crossover electric bike Tronx One priced at $725 (INR 49,999) made available on pre-orders in red and blue colours.

The bike is fitted with 36V 13.6Ah Lithium 500W battery along with a 250W rear hub motor, having a top speed of 25kmph. The startup claims its e-bike can ply 50km on continuous throttle mode per charge and 70-85km on electronic gear assist mode in a single charge.

According to Mahesh Lingareddy, founder and chairman of Smartron, the company is looking to open up motors platform to other EV companies in the future. The company has already found service and care partners across nine cities in India —Mumbai, Goa, Pune, Ahmedabad, Delhi-NCR, Chandigarh, Chennai, Bangalore and Hyderabad.

Chinese automobile manufacturer BYD is reportedly expanding its North American activity from buses and trucks to class six step vans that are expected to go on sale in 2019. The BYD 6D Step Van is said to be equipped with 250 kW and 1,800 Nm electric motor.

There will be two charging options 4.5 hours using AC (on-board charger) and another with 1.5 hours DC fast charging.

Pininfarina CEO Michael Perschke said “As a super sports car brand, no one has embarked fully on an EV strategy.” He estimates that it will take 10 to 15 minutes to charge the battery up to 80 percent.”

The founder of China-based Xpeng Motors Technology Ltd Henry Xia Xpeng plans to raise more than $600 Mn this month from investors that include Alibaba, valuing it close to $4 Bn.

Xpeng manufactured a batch of SUVs named David 1.0 by October 2017. In January, he revealed cherry-red G3 car for sale that comes with autonomous parking, a smartphone app to unlock the car, and a 360-degree camera ascending from the roof.

[Stay tuned for next edition of Electric Vehicles This Week!]