Important Developments From The World Of Electric Vehicles [6-12 July, 2018] 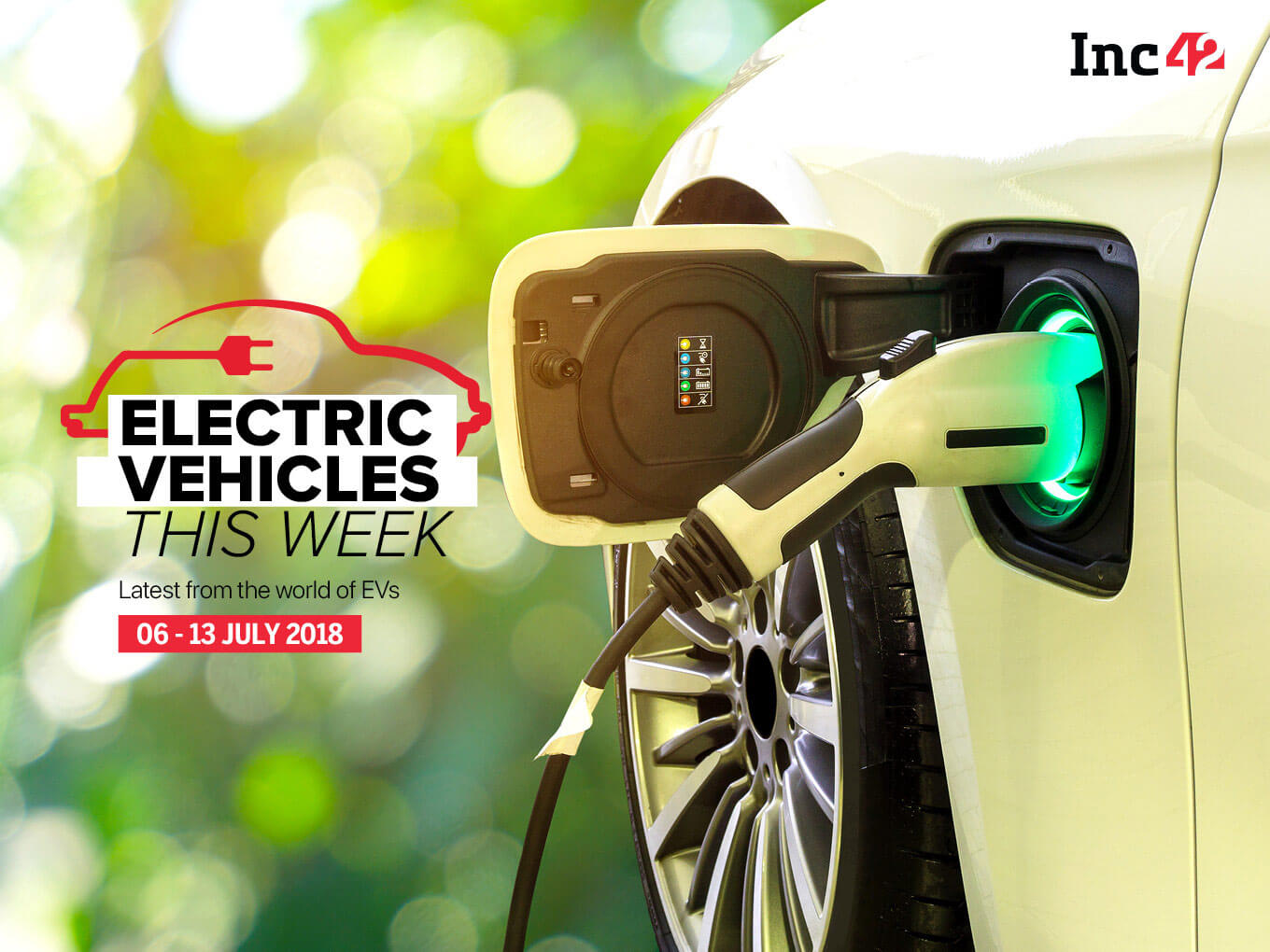 A recent report by Bloomberg New Energy Finance (BNEF) suggests that electric vehicles (EV) will comprise 7% of new car sales in India by 2030. It added that sales of electric cars will reach 28% and electric buses will touch 84% by the same year.

BNEF Asia Pacific head of research Ashish Sethia said, “After 2030, we expect EV sales in India to accelerate with increased affordability, as well as the government’s efforts to ensure universal access to electricity.”

However, the lack of charging infrastructure and affordable models may pull back the growth of EVs in India, he added.

Another report by BNEF suggests that by 2040, more than half of all new car sales, which equals 559 Mn vehicles globally, and a third of the planet’s automobile fleet will be electric. It noted that EVs will achieve upfront cost parity with internal-combustion engines starting in the mid-2020s.

This week, India saw many developments around the EV ecosystem. Realising the importance of minerals such as lithium to manufacture EV batteries, the government has directed three PSUs to acquire minerals from abroad. The Centre is also mulling plans to levy higher taxes on diesel-and petrol-fueled vehicles to encourage EV promotion in the country.

We bring all these developments to you in the 31st edition of Electric Vehicles This Week.

In an effort to push faster adoption of electric vehicles in the country, the Centre is reportedly considering a proposal to impose a marginally higher tax on conventional petrol-and diesel-fueled vehicles.

In a memorandum to the executive finance committee for Faster Adoption and Manufacturing of Hybrid and Electric Vehicles in India (FAME II), the finance ministry says the proposal should be considered to avoid the additional financial burden the government will incur as part of its plan to incentivise EV buyers under FAME.

It said the move would also act as a catalyst for the promotion of EVs.

Government think-tank Niti Aayog plans to instruct Indian states and give them a target to reduce carbon emission through electric buses that can be used by the masses.

Niti Aayog’s official spokesperson said that the directive will ensure that new orders for public utility vehicles by state transport offices will have a certain percentage of electric vehicles (EVs) as well.

As part of the FAME scheme, state transport corporations in Mumbai, Hyderabad, Manali, Kolkata, and Bengaluru have already introduced EVs in their fleets.

In another development, in a bid to curb deteriorating air pollution in polluted Indian cities, Niti Aayog suggested replacing vehicles that are more than 15 years old in central government offices by 2021. The move is part of its larger plan to phase out diesel vehicles and promote adoption of EVs.

The Centre has directed three state-owned mineral companies to look for and acquire lithium and cobalt mines — critical elements in manufacturing EV batteries — from foreign countries.

According to Anil Kumar Nayak, joint secretary of the ministry of mines, the joint venture partners will include the National Aluminium Company (Nalco), Hindustan Copper (HCL) and the Mineral Exploration Corporation Ltd (MECL). It may also invite private sector companies to participate in it.

The move is likely to be formalised along the lines of ONGC Videsh, which buys oil and gas assets from abroad with an aim to help the country build a strategic reserve of key minerals.

Indian automobile makers have demanded that the government fix EV subsidies based on the number of kilometres EV models can run on a single charge and their top speed, citing global practices for certification.

In the draft proposal for Phase II of FAME, the heavy industries department suggested that subsidies be offered based on the size of the lithium-ion batteries fitted in the EVs.

According to sources, battery packs used by different EV manufacturers are not certified by any central agencies such as the Automotive Research Association of India, which also certifies time, speed, and range.

Finland-based energy company Fortum has set up two electric vehicle charging stations at Indian Oil outlets in Hyderabad for public use. Fortum plans to set up 150 to 200 such stations across the country in the near future.

One of the charging stations in Hyderabad is being set up at Goldstrike Fuel and Services located at Raj Bhavan and another one at Begumpet.

Fortum India managing director Sanjay Aggarwal said, “Initially, the charging stations are being set up at two retail outlets of Indian Oil on a pilot basis and, thereafter, it will be expanded to 50 outlets in a period of two years.”

Volvo Cars Asia-Pacific vice president Richard Snijders said, “We are now going fully after electric. Indians are talking a lot about electrification. We would like to skip the ICE investments and go straight towards electrification.”

Maker of electric, diesel, and CNG three-wheelers Lohia Auto Industries plans to produce electric two-wheelers. The company is also investing more than $21.8 Mn (INR 150 Cr) in a new R&D centre, to come up either in Andhra Pradesh or Telangana.

“We do have a presence in fossil-fuel vehicles but our focus is on electrification. We want to be known as an electric vehicle organisation,” he added.

The Telangana State Road Transport Corporation wants private players to avail of subsidies and purchase electric buses. The corporation will then hire these buses and operate them for public usage.

Sources in the corporation said that electric buses are not manufactured in India and the country is dependent on imports. Just the battery of electric bus are said to cost about $131K (INR 90 Lakh) and most of them have to be imported from China.

“If the Centre could increase the subsidy component, then the Corporation could think of procuring them,” he said, adding that when the transport body called tenders for procuring the buses, only five bidders had come forward.

Indian automobile manufacturer Maruti Suzuki has decided to make Wagon R its first car to be offered in an electric version. Last year, Maruti had announced plans to launch electric vehicles with an investment of $568.8 Mn (INR 3900 Cr) including setting up of a plant in Gujarat.

It plans to roll out the new electric WagonR in two variants: a five-seater and a seven-seater, which will be priced under $14.5K (INR 10 Lakh). Analysts claimed that Maruti’s electric Wagon R will be powered with a fuel-based-cum-electric engine, with a capacity of 25-35 MW.

Gurugram-based power and energy company Exicom Tele-Systems has been chosen as one of the members of the Charging Interface Initiative (CharIN e.V.) — a coalition of global automotive firms supporting the combined charging system (CCS) as a global standard for EV charging.

Exicom managing director Anant Nahata said, “We will actively participate in the standardisation and market development activities of CharIN e.V. to make this breakthrough possible.”

According to the Bloomberg New Energy Finance (BNEF) report, China is considering a further reduction in electric vehicle subsidies next year as it plans to push automakers to innovate rather than rely on fiscal policy to spur demand for alternative-energy cars.

The report cited people familiar with the development as stating that vehicles may be required to be able to go at least 200 km on a single charge to be eligible for incentives, up from the current 150 km. The plan is still under discussion and subject to changes, the person said.

Volkswagen Signs MoU With JAC, SEAT To Set Up R&D Centre For EVs

Volkswagen Group in China has signed a Memorandum of Understanding (MoU) with Anhui Jianghuai Automobile Group Corp (JAC) and SEAT in Berlin to establish a new R&D centre on developing EVs as well as a competitive platform for battery electric vehicles (BEV).

Professor Dr Jochem Heizmann, president and CEO of Volkswagen Group, China, said, “We are proud to have the opportunity to further collaborate with a trusted partner in developing E-mobility technologies. It represents another major step in Volkswagen Group’s overall China strategy.”

According to the MoU, a “Roadmap E” will be prepared in which Volkswagen Group China will look to lead the way in the development of e-mobility, with the introduction of 40 locally produced models to the market within the next seven-eight years.

The PA Consulting Group has predicted that Tesla will sell the most electric vehicles in 2019, followed by Mercedes, which could rank fifth in the global EV ranking by 2021.

However, its ranking suggests that Tesla may fall to the seventh place by 2021, with German carmakers Mercedes, BMW, and VW coming first, second, and fourth, respectively. The Renault-Nissan-Mitsubishi alliance is expected to be ranked third.

The PA group noted that Tesla may be able to improve its ranking after signing an agreement with the Chinese authorities to build a gigafactory in Shanghai. Tesla intends to produce 500K EVs five years of construction of the factory.

For the ranking, PA Consulting scored six key success factors out of 100, using an average to determine a carmaker’s e-mobility potential.

The Indonesian government plans to provide a tax holiday to battery-makers to increase the production of electric vehicles in the country, as it aims to phase out the use of vehicles that use fossil fuels by 2040.

“We hope that with such an incentive, investors accelerate the development of the battery industry,” said Indonesia transportation and electronics director general Harjanto.

He said several investors from China, Japan, and South Korea have expressed interest in establishing battery factories in Indonesia. He declined to name the potential investors.

Stay tuned for next edition of Electric Vehicles This Week!