India, with its 462 Mn internet users, is representing a digital economy which has arguably the greatest market potential for global players. The Harvard Business Review (HBR) stated this projection in the latest edition of Digital Evolution Index 2017, indexing the digital state of 60 countries. HBR made this analysis in collaboration with the Fletcher School at Tufts University and Mastercard on the basis of trends observed since 2015.

The factors considered for analysis were: demand and supply conditions; Institutional environment; innovation and change. The competitiveness of a country’s digital economy along its current state and its pace of digital evolution over the period 2008–2015 has also been considered.

On the basis of analysis, the countries have been segregated into four zones: 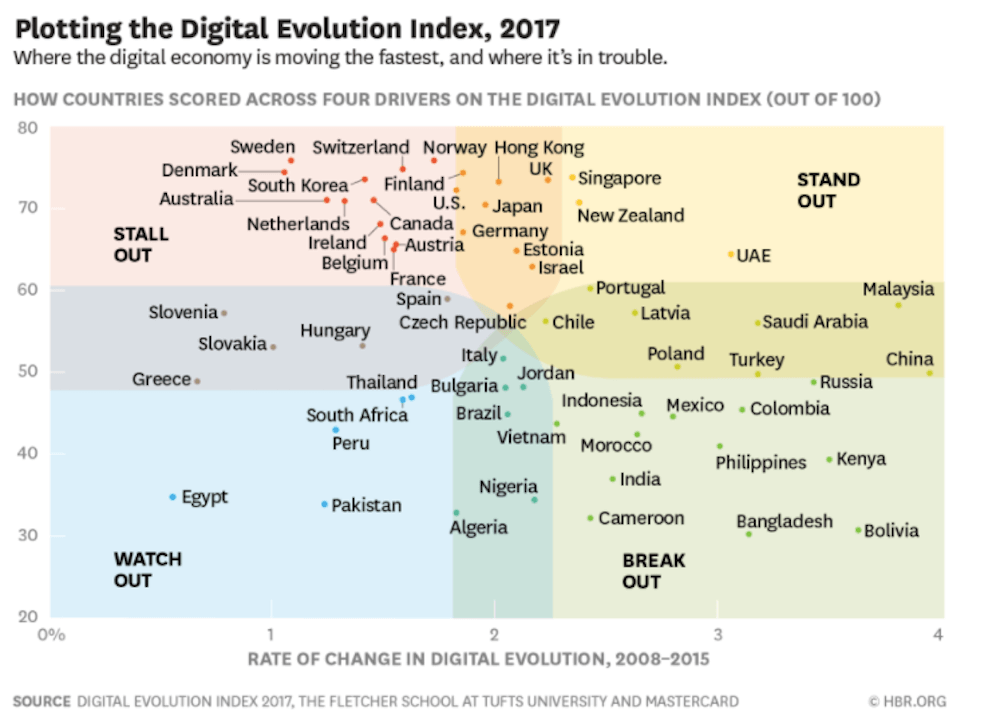 The Digital Evolution Index 2017 has India bracketed in the list of ‘Break Out’ countries along with Kenya, Indonesia, Bangladesh, Mexico etc.. China is also in the Break Out zone, but veered more towards the ‘Stand Out’ category. India’s digital economy potential lies in its vast population, currently at 1.29 Bn, increasing adoption of technology, and the rise of skilled and global language-speaking youth.

Also, the NDA government’s demonetisation drive was not able to showcase significant impact. The result? India is still a cash-dominated society with a lot left to achieve under its Digital India campaign launched in July 2015. As stated in the HBR report:

“In 2013, 85% of the world’s transactions were in cash. While the Netherlands, France, Sweden, and Switzerland are among the least cash-reliant countries in the world, even in the Eurozone, 75% of point-of-sale payments are in cash. Most of the developing world is overwhelmingly cash-dependent; in Malaysia, Peru, and Egypt, only 1% of transactions are cashless. Even India’s demonetisation experiment has not broken the country’s heavy cash dependence. Five months after the country demonetised 86% of its currency, cash withdrawals were actually 0.6% higher than a year earlier.”

As per the HBR Digital Evolution Index 2017, at present, on the planet, more people have access to a mobile phone than to a toilet. While an increase was observed in cross-border flows of digitally transmitted data, incidents of cyber attacks have also increased widely with a much deeper impact. The data breach report of a potential 120 Mn users of Internet data provider Reliance Jio is the most recent incidence.

Digital Players Have Begin To Dominate The Market

As per stock prices on July 6 2017, the most valuable companies globally were Apple, Alphabet, Microsoft, Amazon, and Facebook. China’s Alibaba gained the seventh position, overall.

Digital Technologies Will Change The Way Work Is Done

As stated in the HBR Digital Evolution Index 2017, “Automation, big data, and artificial intelligence enabled by the application of digital technologies could affect 50% of the world economy.” The present technology has the potential to automate over 1 Bn jobs worth $14.6 Tn.

Public Policy Is Essential To The Success Of The Digital Economy

Globally, economists should adopt public-private policies to foster innovation in a digital economy, including India. Also, They must encourage better integration of automation, data, and new technologies into the legacy economy. Steps must be taken to introduce skills required to thrive in a digital economy at early levels, specifically at schools.

Identifying A Country’s Unique Drivers Of Digital Momentum Is Necessary

Considering factors such as the current state of digital economy and country size, growth drivers for digital economy must be identified and amplified. While developed economies need to prioritise on innovation, developing economies should focus on institution.

As per the HBR report, “Smaller countries with strong institutions can create high value as early adopters and create a demonstration effect for the world by assembling the right ecosystem. Traditional trading hubs (such as Hong Kong, Singapore, and the UK) and emerging digital hubs (such as New Zealand and Estonia) can take the lead in creating such “smart” digitally enabled ecosystems.”

Overall, the HBR Digital Evolution Index 2017 suggests positive growth trends for the digital economies of the world. The report considers the Asia Pacific region – with China and Malaysia – as the most exciting region – but requires political support and stability to advance further. India, on the other hand, is moving towards the digital economy path with a fair number of initiatives and innovations.

Also, while demonetisation might be considered as having not made much impact, it has created a new conversation around digital payments – with not just fintech startups and the banking sector, but also the government itself taking steps to onboard the unbanked. Platforms like UPI-integration and products like the BHIM app is a commendable step in this direction. Also, India is committed towards its plan to become an electric vehicle nation by 2030, highlighting further progress for technology adoption by the country. As, each sector – be it education, healthcare, infrastructure and more – benefits from being associated with a rising digital economy, it is hoped that the overall economy of India moves from the ‘Break Out’ stage to the ‘Stand Out’ stage in the next HBR review.