Important Happenings From The World Of Cryptocurrency, Bitcoin, ICOs And More [10 - 16 June] 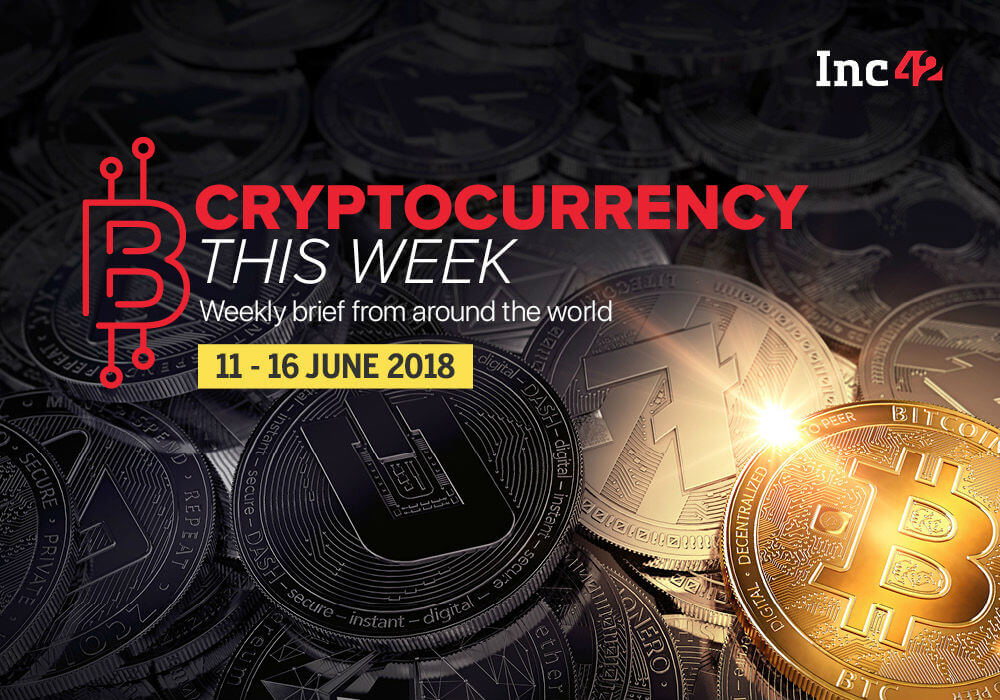 Bitcoin price has hit a new low in the last 4-5 months.

Meanwhile, Ripple (which has gained its popularity manifolds) CEO Brad Garlinghouse has suspected that Bitcoin can’t be a potential global currency as more than 50% of the currency production is controlled by four mining companies in China.

“How do we know that China will not interfere, and how many countries will want to use the currency that it controls?” he questioned.

Let’s take a look at what’s cooking in the world of cryptocurrencies!

Two separate chargesheets have been filed against Amit Bhardwaj, who was arrested in Bangkok on March 31, and eight others in the country’s largest-ever $300 Mn Bitcoin scam. Amit Bhardwaj was the founder of CEO of a number of companies such as GB Miners running Bitcoin-based MLM schemes.

The Darwin Labs founders have been named in one chargesheet (Dattawadi) only, while the rest seven have been made accused in both the chargesheets.

A senior member of Pune Police crime branch team who is investigating the matter told Inc42, “Yes, the chargesheets have been filed. While one chargesheet related to the Dattawadi police station was filed on June 11, another ‘4000 page-long’ chargesheet was filed on June 13 against the accused, including Amit Bhardwaj, at Shivaji Nagar District Court, Pune.”

Apart from Amit Bhardwaj, the eight others against whom the chargesheets have been filed in the bitcoin scam are Hemant Vishwas, Hemant Babasaheb Chavan, Ajay Tanaji Saheb, Pankaj Srinandkishore, Chandrakant Bhope, and Nikunj Jain and Sahil Baghla of Darwin Labs.

Cryptocurrency: RBI Response To An RTI

India’s central bank, the Reserve Bank of India (RBI) has faced huge criticism over its response to an RTI filed by a Delhi-based lawyer Varun  Sethi.

On a question whether the RBI had constituted any committee to arrive at the decision of banning banks from dealing with cryptocurrency entities, the RBI responded that no committee was ever formed for analysing the concept of blockchain before the decision. Speaking to Inc42, one of the Sr. members close to the development, stated that the interdisciplinary committee formed by the Finance Ministry was fully aware of the RBI circular. And, since the present committee is already looking into the each and every legal aspect and its aftereffects, there was no need for the RBI to constitute a separate committee.

“The circular was issued in line with the previous press releases by the RBI pertain to the cryptocurrencies and the decision was taken to halt the immediate exponential rise of the cryptocurrency trading, that was making it hard to keep a track of black/grey money to white conversion, he said.”

Praveenkumar Vijayakumar, Chairman & CEO of Belfrics Global told Inc42, “The move to distance away from the FIs from cryptocurrency operators, was surely a hasty decision made by RBI. We have been voicing the fact that the industry participants were not consulted ever since the cryptocurrency exchanges started operating in India. When regulators across the globe have been in a fast-forward mode to understand and absorb the new technology to the benefit for their nations, Indian regulators have taken a conservative approach and are being advised by people who have limited understanding of cryptocurrencies and the underlying technology.”

Bangalore-based CoinSwitch.co, a multi-cryptocurrency exchange platform has partnered with four crypto-assets exchanges, across the globe. The association will make available the offerings of Live Coin, Cryptopia, Hitbtc and KuCoin to the Indian users. By its extension, digital assets available at these platforms will be up for grabs for Indian crypto traders and investors.

Commenting on the development, Ashish Singhal, Co-Founder & CEO of CoinSwitch.co said, “In partnership with four of the global cryptocurrency exchange platforms, we will provide our Indian users with more investment alternatives. At CoinSwitch.co, our users can expect parity with the international standards and find easier alternatives to bank upon the growing wave of cryptocurrencies.”

CIA May Have The Details Of Satoshi Nakamoto

Who is/was/are/were Satoshi Nakamoto? This has been one of biggest mysteries of the last decade and would likely to remain so. Recently, while responding to the Motherboard writer Daniel Oberhaus’s query  (what is known as a “Glomar response” under the Freedom of Information Act) CIA has stated that they could neither confirm nor deny the existence of documents relating to the pseudonymous creator of Bitcoin, Satoshi Nakamoto.

Once a chief strategist of the US President Trump, and now disavowed, Stephen K Bannon (Steve Bannon), having left the alt-right Breitbart News, which he cofounded, seldom found himself in the media news since he left the White House.

However, at a time when the popularity of Bannon is going down in sync with the pricing of Bitcoin which is currently trading at $6.5K, Bannon has jumped on to Bitcoin bandwagon saying, “It’s a disruptive populism.”

In an interview with the New York Times, Bannon stated that Bitcoin and other cryptocurrencies can disrupt banking the way Trump disrupted American politics. Bannon also revealed that he had a good stake in Bitcoin.

However, not many would like the Bitcoin disruption to compared with the Trump’s one, in the US!

Irrespective of the falling value of Bitcoin, almost a dozen exchange and Bitcoin entities are lined up to start their operations in the Indian market.

Stay tuned to Inc42, for more latest news pertaining to cryptocurrencies and ICOs and more!