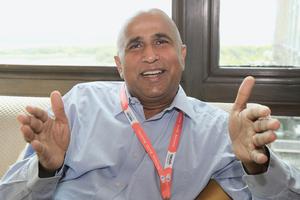 As a serial entrepreneur, he sold his four ventures successfully, with the most positive being Tutorvista that was acquired by Pearson Group in 2011. Krishnan Ganesh, who is building 9 ventures altogether that are not just another startups out there, but are well executed and well funded ventures. Under the umbrella of GrowthStory that started in 2011, Ganesh along with his wife, Meena promotes greenfield venture. She is currently the MD and CEO of one their their ventures- Portea Medical.

While other food tech and delivery startups are reeling under cash crunch, his first venture under GrowthStory platform, Bigbasket, recently raised $25 Mn from International Finance Corporation, the private investment arm of World Bank.

Ganesh’s healthcare venture, Portea Medical, operates across 24 cities and handles 60,000 visits  a month to patients’ homes. It had raised $37.5 Mn in a Series B round of funding led by Accel Partners.

Another venture Bluestone received funding from Ratan Tata, while HouseJoy is rumored to be acquired by online giant Amazon. Apart from this, Ganesh personally has done angel investment in 9 startups including HackerEarth that was ranked among the Top 10 startups at Nasscom Emerge 2015.

Looking at the growth and healthy pipeline of his portfolio of startups, Ganesh is said to have found the right formula of how to run a successful venture. In a conversation with Inc42, , Ganesh shared his views and beliefs about the startups, his ventures, finding the right market fit and next areas of venture.

Inc42: As an entrepreneur, you successfully exited all the ventures, the best one being TutorVista. But instead of starting another startup, you launched GrowthStory as a startups builder platform?

Ganesh: We wanted to be associated with 2-3 startups, rather running one. Hence, we launched this startups builder platform GrowthStory. We look at open spaces that can be capitalised on and can build wealth in large valuation for all stakeholders including founders and employees, in next 10-15 years. Cleantech and renewable energy, for eg. have great opportunity, but our understanding is low. Then look at our own strength where we have unique advantage.

We then build the core team and get started. Look at Bigbasket, before starting it we realised that grocery is mother of all categories. People discouraged us saying margins would be low in this space specially milk and eggs category, we would have tough fight against the kirana stores. Today, there are roughly 40 companies in this space.

After finalizing our model, we reached out to VS Sudhakar and Vipul Parekh who were working with Fabmall, and we soon rolled up Abhinay Choudhary, Hari Menon and VS Ramesh.

Inc42: How is running a venture builder platform different from Angel investing?

Ganesh: The main idea with GrowthStory is take enough shots, so that we have at least 2-3 shots hitting the target score. Angel investment is like spray and pay, just a step better than gambling. You make small bets in multiple companies; you are neither involved nor influencing the destiny. A venture builder is being a parent, guiding and nurturing the children.

Inc42: As an entrepreneur, you always looked into white spaces. But today, there are many offering similar services like some of your ventures including BigBasket and FreshMenu. What’s your opinion?

Ganesh: We like to be in spaces where no body exists. Imitation is the best form of flattery and this is verified when we see other following and investing in similar models. However, in startups, it is never about competition. It about how well you can execute the idea and create a compelling service. You need to align all ducks in one straight line. When Indigo Airlines entered the aviation space, there were many players. It is not going to be about competition. It is about entering the sector where there are umpteen opportunities for everyone, unlike spaces where there is only one large player monopolizing the market like the days of Netscape and Microsoft.

Inc42: You have been a believer of digital media marketing for customer acquisition. But there is different trend of discounts that is prevalent for acquiring more customers. What is your view about it?

Ganesh: Trying to reach target market and giving them a compelling value proposition is the best way of marketing. I believe that you have to find your customers where they are, they are on social media, they are digital. However, it is also true that Indian consumer is price sensitive; inherently there is an inertia that stops the change. And in order to give a nudge to make a move, startups are resorting to heavy discount. Principally, it is okay to do any of these things, but how do you retain them?

This is a short-term solution by using investor money and capital to get customers and is not going to help. I am aghast in a way. In order to be innovative, they are moving away from the core essence of marketing, and it’s no more about influencing customer, but buying them.

Inc42: Last couple of years, we have not seen enough action around IPO among startups. The examples are limited to Justdial, Makemytrip and so on. Why are startups delaying their IPO?

Ganesh: Well, there are multiple aspects to this. It depends on what state the company is in and what is the objective of the company, which is not really VC funded, not listed as IPO? Startups in hair spa and salon have a strong business model, but unlikely to go for IPO.

Also, Indian market understanding of new age business models and tech business models is very limited. The investors in stock markets are still going by multiple of EBIDTA, sales and profits. In other markets like the US, we saw Amazon and other startups going public, but Indian market is yet to evolve.

Secondly, companies are delaying in IPO, because they feel private investors are giving better value to their business. Investors value the company much better, thus delaying/discouraging the IPO. With startups, it is not much about the information sharing in public, but about the returns of investment.

Inc42: So did you mean to say that if  Flipkart had gone public two years ago, it wouldn’t have seen this valuation?

Inc42: You have almost covered the entire spectrum with companies in Consumer space, Grocery, Education, Healthcare, Logistics etc. Any segment that you believe still has white spaces and potential to tap?

Ganesh: India is a large market and everything is broken, this becomes our opportunity. Areas like Fin-Tech and peer-to-peer lending have huge potential and are open for disruption.

Commerce through chat is new emerging space and so is vernacular-based business offering. Even today, when we talk about hype of startups, we are looking at the 100 Mn market opportunity that lives in tier I cities. We have not touched the next 100 Mn in tier II and Tier III cities and that is where the next opportunity is.

Inc42: Which one do you prefer, fresh graduates from B-schools or experienced professionals?

Secondly, every promoter would want to have smartest people in the team. You cannot evaluate the person much on basis of an interview. We cannot give much time and effort in just finding out people with smartness and intelligence. People  from IIT and IIM show that they could have succeeded in extremely competitive phase of education. So these degrees becomes a surrogate for filtering and making our jobs slightly easy.

Inc42: Lastly, it is said that services sector grew to this level because of non-interference from the government. But do you think that Government should stay away from the startup-ecosystem, letting it grow at its pace.

Ganesh:  You are correct about the services sector, but government should definitely get involved to at least act as a catalyst for growth. It should ease and simplify rules, and processes in new companies act. Some are from the draconian era. There is intent, but they are still far away from promoting it.

There are so many impediments like raising money at a premium, Angel tax, issuing shares or selling shares at fair market and more. You cannot give ESOPs to promoters and founders. You cannot shut down a company just because you are not making money. We keep talking about the ‘Startup India’ slogan, but today it is just 2% of what it should be. There is 98% more work to be done.