The CarTrade IPO, which kicks off today, will determine the course for profitable tech startups in the public markets 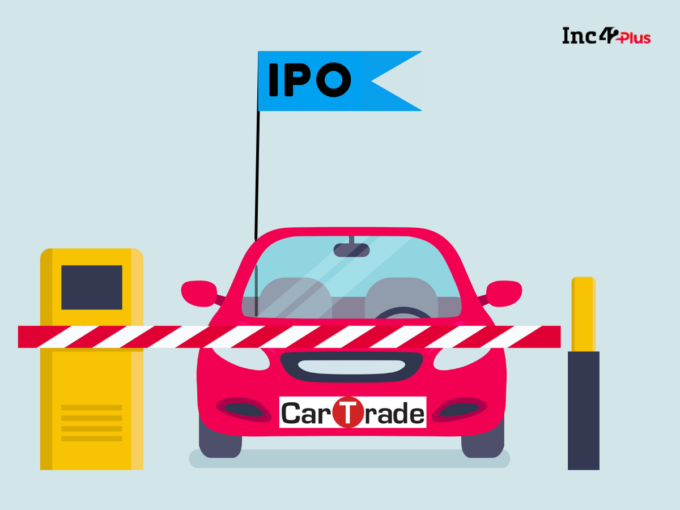 When it rains, it pours. And in the case of startups going for IPOs, the best is yet to come. If Zomato has whetted the appetite of Indian investors for the big startup brands, the CarTrade IPO, which kicks off today, will be one that determines the course for profitable tech startups in the public markets.

While CarTrade is definitely not in the same brand bucket as Zomato, those in the know are more excited for the automobile marketplace’s listing, because the automotive industry is more or less traditional in nature and therefore investors are well aware of the risks and challenges associated with this sector.

On the other hand, food delivery is a newcomer to the stock exchanges, so if Zomato’s early days on the bourses are any indication, CarTrade is about to have a big boom right off the bat.

The Mumbai-based automobiles marketplace, operated by CarTrade Tech, has announced a price band of INR 1,585 – INR 1,618 per equity share. The IPO opens for subscription today and closes on Wednesday, August 11, 2021. 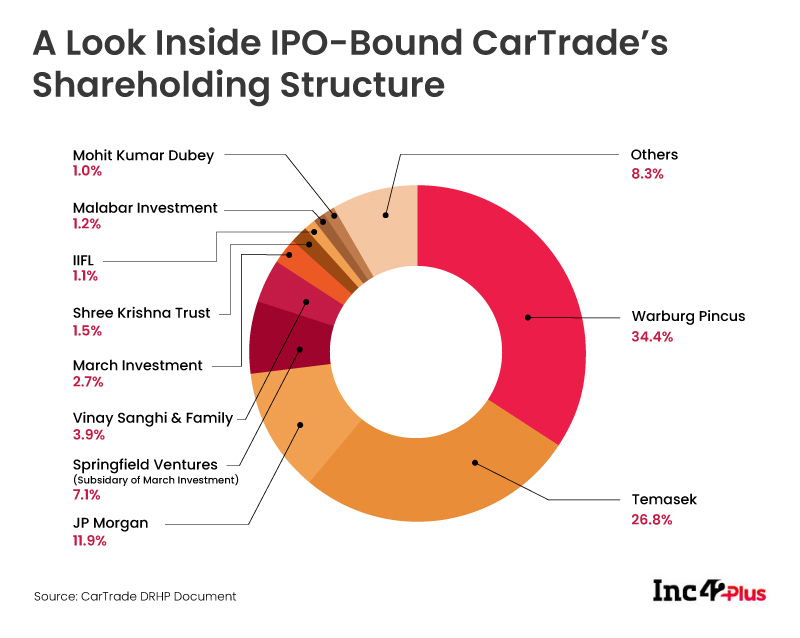 The startup has raised $307 Mn to date. In terms of stakeholding, Warburg Pincus is the largest stakeholder holding 34.44% followed by Temasek’s 26.48% shareholding. Others such as JP Morgan holds 11.93%, March Capital holds 9.79%. The company’s founder Vinay Sanghi and his family hold 3.56% stake in CarTrade.

Heading: The Key Shareholders In CarTrade

Up to 50% of the net offer shall be available for allocation to qualified institutional buyers (QIB), with at least 15% reserved for non-institutional bidders and at least 35% allocated to retail individual bidders. By Tuesday (August 9), the direction of the IPO subscription should become clearer, but given that such a large portion is reserved for the retail portion, there could be a massive upswing in the opening price if there is healthy oversubscription from this portion.

Founded in 2009 by Vinay Sanghi, a former chief executive officer of Mahindra First Choice and Rajan Mehra, former country head of eBay, CarTrade is an Indian multi-channel automarket place, offering both new and used vehicle to customers through platforms such as CarTrade, Carwale, CarTradeExchange, Shriram Automall, Adroit Auto, Auto Biz, and  BikeWale. CarTrade group has over 40 OEMs, 15,000+ dealers and has 180 owned or franchise stores.

This diversification of the business is considered a major advantage for CarTrade. It has a vehicle-agnostic marketplace platform, multiple distribution channels for a range of vehicles, offers allied services in the value chain and has omnichannel presence. CarTrade’s Profitability Sets It Apart, But Is the Valuation Too High?

The startup competes against the likes of Cars24, Cardekho, Mahindra First Choice, Droom, Spinny among others.

Interestingly, Droom, which entered the unicorn club last month, is also preparing for an IPO. Droom raised $200 Mn at a valuation of $1.2 Bn and the company said it will finish the year with a net revenue of $65 Mn, up from $54 Mn last year and claims it will become profitable at that income level. However, this is yet to be proven on paper.

Among the competition, CarDekho has the closest income scale, but the company did not turn a profit like CarTrade in FY20. This year too, CarTrade brought in profits at greater than 3x growth since 2020. 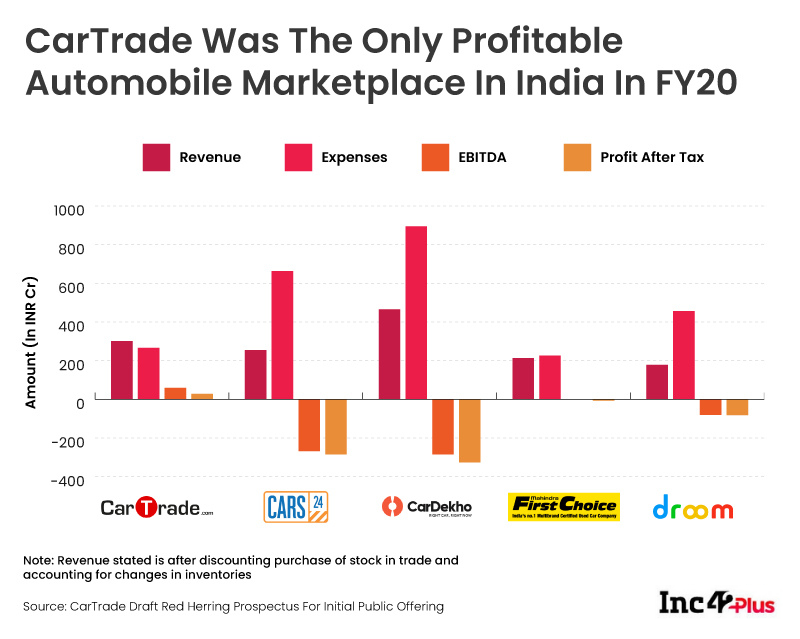 In terms of consolidated revenue, the startup has posted INR 318 Cr in revenue overall, with INR 298 Cr as revenue from operations. It reported a net profit of INR 31.2 Cr in FY20. For FY21, it reported operating revenue of INR 249 Cr with a net profit of more than INR 101 Cr, as a result of a massive cut in spending on advertising, promotions and other marketing operations. But analysts are not entirely convinced that it can sustain this pace, as there’s no real benchmark here.

According to Abhay Doshi, founder of Unlisted Arena, which tracks securities in the grey market for tech stocks, the price to sales multiple for CarTrade is almost 30x which is way higher than globally listed peers, but there is no precedent in the Indian market for a used cars marketplace.

Other equities market analysts are also bullish on CarTrade since the company is doing better compared to the competition in terms of financials. ICICI Securities, Anand Rathi, Angel Broking and other brokerages gave a subscribe advisory for CarTrade and said the company has a strong brand, robust technology, a profitable & scalable business model.

CarTrade’s asset-light model can be considered a positive, but it also faces high competition from Cars24, Droom and others, which is not unlike the fight for market share in other ecommerce verticals. It may need extensive cash burn in the recovery or growth phase.

“The issue looks expensively priced, but being a niche company and frenzy for startup IPOs, it may accelerate in the short term due to first-mover advantage. From a long term perspective, it would be wise to watch for further performance and decide accordingly,” Doshi added.

However, there are still plenty of inherent risks in the used automobile market. Nirmal Bang Institutional Equities, for instance, said there are positives, but the cyclical nature of the used cars segment creates some uncertainty. Besides this, the Covid-19 pandemic is far from over and it may affect CarTrade’s ability to drive new business.

The company may be adversely impacted by a fall in individual car ownership or sudden decline in demand for certain types of vehicles, such as those that do not comply with new emission norms or new technologies.

Besides this, the ecommerce sector is also expected to see plenty of proposed changes through the Indian government’s regulations. This may severely impact CarTrade’s ability to use data to maximise its reach or sell more offerings to customers.

These risks persist for nearly all tech startups, but the positive financial performance for CarTrade in the last two fiscal years is something that is rarely seen in the startup ecosystem, and perhaps that may be the biggest trump card for CarTrade.