“India Is Home To Second Most Hackathons,” Says The Global Hackathon Report By HackerEarth HackerEarth, in association with Honeywell and technology partner IBM, has announced the winners of the fourth edition of its countrywide Hackathon India Hacks 2017. The finale was held on September 8, 2017 in Bengaluru. Unlike previous hackathons, India Hacks 2017 was divided into five tracks. While AI, IoT, and Fintech were part of India Hacks, Hackathon, Programming, and ML were included under India Hacks Challenge. Winners were announced for each category.

The hackathon aimed to provide the developers a platform to interact with top industry programmers, leaders and help nurture the ecosystem.

Speaking to Inc42, Sachin Gupta, CEO, HackerEarth said, “Considering its scale, diversity and business engagements, India Hacks 2017 was completely different from other hackathons events that have been happening so far, in the country. For the final round and conference, there were more than 15,000 registrations, a huge number for any hackathon event. We had also closed 20 sponsors and partners, actively engaged in knowledge sharing and mentoring.”

The 4th India Hack 2017 Challenge made developers to brainstorm their minds around problems spanning around topics such as Blockchain and other CS related topic with varying difficulty levels. 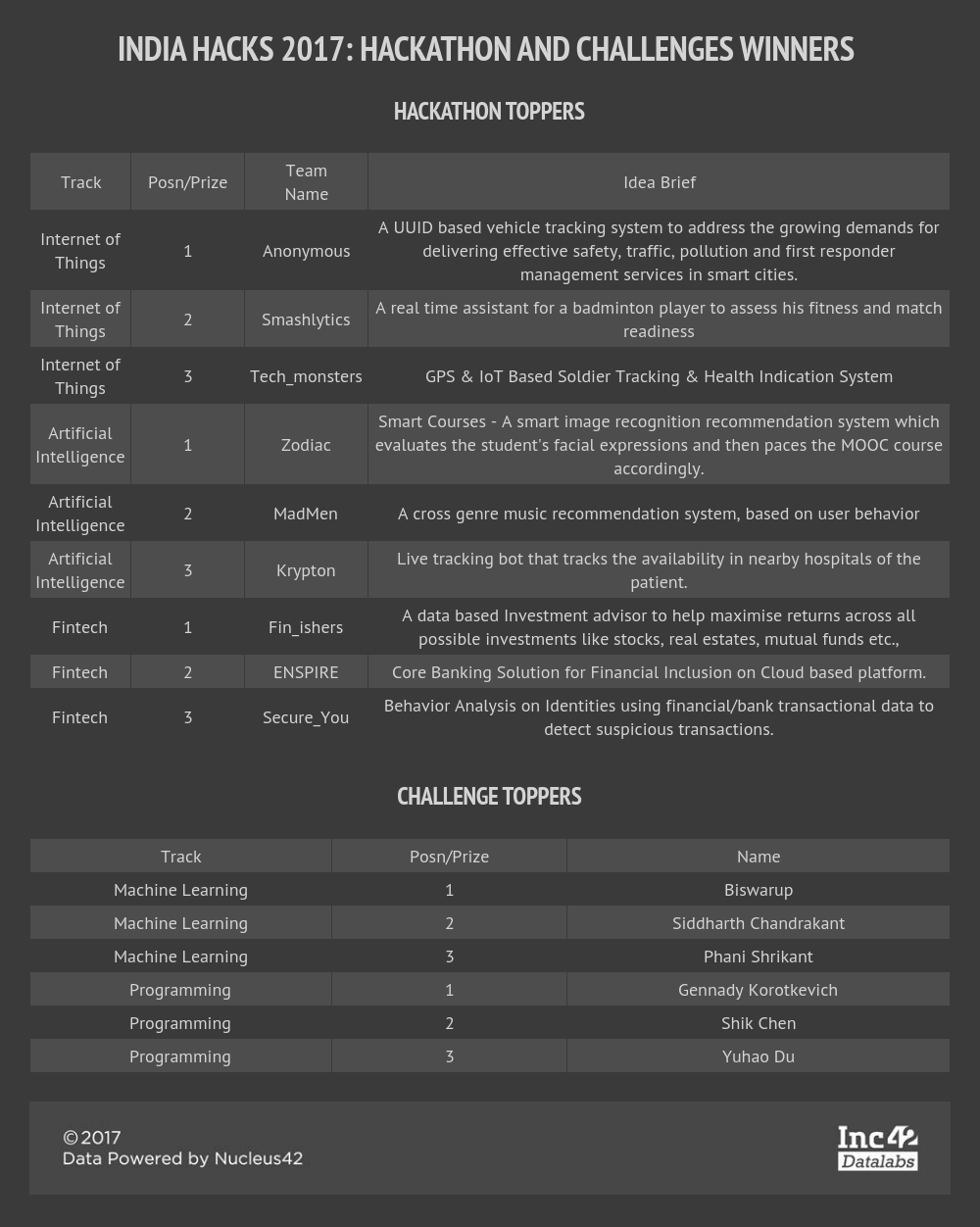 The knowledge conference, was held on September 9, 2017, with speakers from IBM, Honeywell, Credit Suisse, Freshworks, RBS, Practo, Here Technologies and other sponsoring companies. They addressed a number of issues that included Crowdsourcing, Machine Learning, AI, APIs and building cloud products.

For instance, Srinivas Muktevi, Head of Data Analytics, Honeywell speaking on the application of ML and AI in IoT stated, “Never jump to AI part, if your foundations i.e. data mining techniques are not conclusive. Data is more important than the algo. While ML based model development is just one part of the puzzle, explainability is the key part while integrating the same to AI.” Elaborating on the importance of explainability, Srinivas stated how Netflix developers even having 90% of the data and thus ML correct, could not quantify the same to AI, owing to the lack of explainability of the data.”

Further, Ravishankar, CEO, Active.ai spoke on how AI could take the entire banking applications to next level. He also questioned why a personal credit card to be remembered by a 16-digit number, when it could easily be personalised with a person’s bio-information or their signature.

“India Is Home To Second Most Hackathons”: The Global Hackathon Report By HackerEarth

In recent years, India has become a hotspot for hackathon, with bigwigs like Microsoft, EY to startups like PayTM  hunting and awarding top programmers through organising such events.

This fact is further supported by the recent ‘Global Hackathon report’ released by HackerEarth while announcing the winners of the India Hack 2017, The report lists India, with 105 Hackathon events in last two years, as home to 2nd most hackathons in the world. Surprisingly, China has hosted only 14 hackathons in the period, and ranks at eighth position in the list. US with 379 hackathon tops the chart.

If talked about the Indian cities, with 24 and 11 events correspondingly, Bengaluru and Mumbai make to the top ten cities with the most hackathons. Sachin Gupta stated, “The report outlines a clear trend—hackathons are successfully battling talent scarcity, acquisition, and retention, as well as fueling innovation, across domains and functions.”

According to the HackerEarth report, IoT, Machine Learning, Artificial Intelligence, and Augmented Reality are among the top domains for hackathons.

Other key findings from the report include:

Hackathons are not one-off events

Women-only hackathons are nowhere near enough

The number of all-female events almost doubled from 2015 to 2016. The study separately analyzed close to 40 women-only hackathons

HackerEarth is a startup providing talent management software and HR services to some of the tech-based companies such as Pitney Bowes, Amazon, Walmart Labs, and Honeywell. Riding on the event success. Besides organising hackathon events such as India Hacks,Sachin eyes to double the company’s revenue by next year. In a recent equity financing round, the company has raised $4.5 Mn (INR 30 Cr) led by US-based DHI Group Inc.