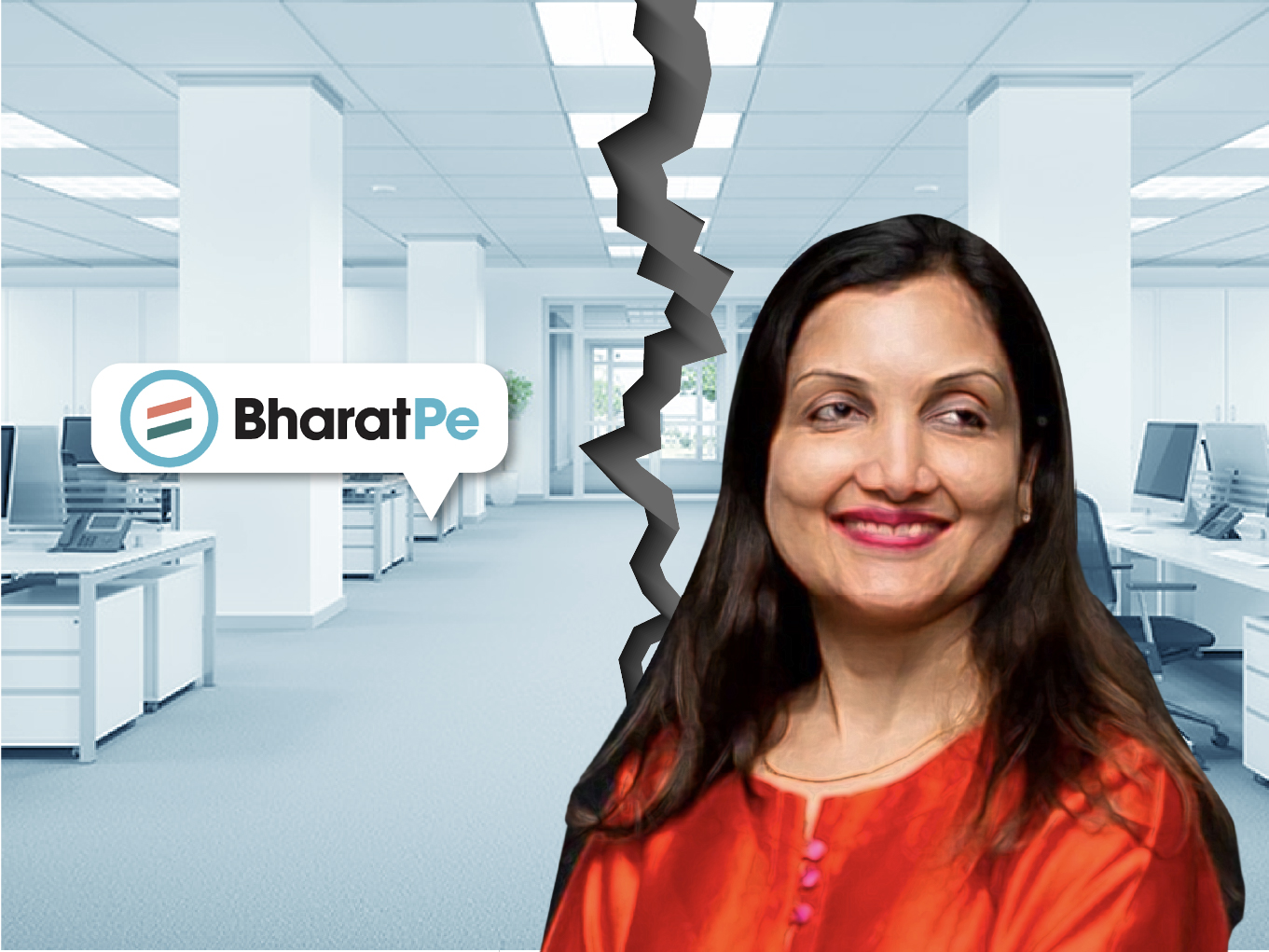 The fintech firm was said to be paying recruitment fees to a number of ‘consultants’ for the employee recruitment, but the investigation found that they were actually routed through Madhuri Jain Grover

As per the employee contract, the termination of an employee will also result in them losing the equity in the company, i.e Grover may have to part with her stakes in the company

Last month, she took a ‘voluntary’ leave but recently claimed that she never actually tendered her resignation, hinting that the Board ousted her

BharatPe board has terminated Madhuri Jain Grover, head of controls at BharatPe and the wife of company cofounder and managing director Ashneer Grover. According to reports, Grover was terminated from BharatPe because of the financial irregularities discovered by the company.

As per the employee contract, the termination of an employee will also result in them losing the equity in the company, i.e she may have to part with her stakes in the company along with her post.

The fintech firm was said to be paying recruitment fees to a number of ‘consultants’ for the employees recruited through them when Grover was heading controls.

In five such cases, employees have confirmed their joining dates as the one mentioned in the vendor invoice but they had no knowledge of being recruited or engaged through the said ‘consultants.’

In three out of those five instances, Madhuri Jain Grover is said to have directly received the invoices from the vendors and forwarded them to the accounts team for payment; hence she has been charged with ‘misappropriation of funds’, the report added.

She also took a jab at the company Board, referring to the members as ‘male chauvinists’ and accusing them of ‘objectifying women’. She even put up a video of her son doing trivial tasks for BharatPe, claiming that he was called by the accounting firms for questioning.

BharatPe’s trouble with Grover came to a head when an audio clip of Grover allegedly threatening and verbally abusing a Kotak Mahindra Bank employee during a telephone conversation went viral, of which his wife, Madhuri Jain Grover was also a part.

Grover can be heard issuing ‘encounter’ threats and abusing a Kotak Mahindra employee in the viral audio clip — which he had claimed was fake, an attempt to tarnish his reputation. In the audio, Grover and his wife were talking to the relationship manager as they weren’t allocated shares during Nykaa’s IPO.

Following the controversy, cofounder Ashneer Grover and his wife Madhuri Jain Grover took a voluntary leave of absence from the company. Most recently, BharatPe’s head of control, Grover wrote to the company Board alleging that she never actually tendered her resignation, which she claimed was accepted by the Board.

In a fresh twist of events, the company had denied that it sought Grover’s resignation. “The Board of BharatPe never sought any resignation from Ms Madhuri Jain. Hence the question of the Board accepting her resignation does not arise. She was asked to go on compulsory leave of absence on January 20th,” the company spokesperson said at the time.

While there was reportedly confusion over the resignation, reports suggest that Ashneer Grover offered the resignation of Madhuri Jain Grover as she reported to him. Her resignation was purely ‘spontaneous’ and not all board members were in agreement with the proposal, Grover has previously claimed.

Fuel To The Controversy

Shortly after she went on ‘voluntary’ leave, BharatPe faced challenges with corporate governance when Bhavik Koladiya, a former cofounder of the startup and the current group head of product and technology, was convicted in a credit card fraud case in the US.

BharatPe later appointed A&M, a risk advisory firm to conduct an independent audit of the startup’s internal processes and systems. Meanwhile, Ashneer Grover hired law firm Karanjawala & Co. to safeguard his shareholding in case he is ousted from the company.

The investigation into alleged financial irregularities at BharatPe widened when the fintech firm onboarded PricewaterhouseCoopers (PwC) to look into the company’s transactions, alongside Alvarez & Marsal (A&M); however, the scope of its involvement stands undisclosed.

A&M’s preliminary inquiry had reportedly found fraudulent transactions and alleged instances of BharatPe routing money through fake HR consultant firms to Madhuri’s brother Shwetank Jain. Additionally, the investigation raised questions about the alleged conflict of interest in the acquisition deal of Payback (considering it was overvalued due to Payback’s leadership team and Grover being former American Express executives).

All these deals were allowed by the BharatPe Board. Meanwhile, investigations are underway into every aspect of the startup – from marketing spending to financial transactions. However, clamour grows from within BharatPe’s Board for cofounder and managing director, Ashneer Grover to exit the fintech startup permanently.

Ashneer Grover also claimed that BharatPe CEO Suhail Sameer has forced him out of the company, followed by Madhuri Grover claiming that she never actually tendered her resignation (hinting that the Board ousted her). Calling Sameer ‘a puppet of investors’, Grover has alleged a conspiracy behind sending him away and instituting a probe, which BharatPe has denied.

In a dramatic escalation of hostilities, Ashneer Grover accused board chairman, Rajnish Kumar and Koladiya, of attempting parallel negotiations amidst the ongoing feud. He hit out at Koladiya claiming he called to set a meeting, without specifying the agenda of the said meeting. Grover also accused him of using foul language.

“The call was made from Rajnish Kumar’s residence in Ambience Island, Gurugram. I was informed on the said call that the two of them wanted to meet me to discuss some issues and that I should travel to Gurugram for the said meeting,” Grover claims.

The move comes shortly after Grover filed an arbitration plea with the SIAC claiming that the company has no authority to conduct an investigation due to the illegal nature of the same.

In his plea, Grover claims that despite numerous representations and objections, BharatPe has deliberately kept the review and assessment by the review committee an opaque process. The Board has not allowed him to present his case. He also claimed that the Alvarez & Marsal (A&M) report and preliminary investigation is invalid because it was in violation of shareholder agreement and articles of association.