Along With The Ebikes, The EV Startup Has Also Announced An All-In-One Servicing Solution Called Ather One 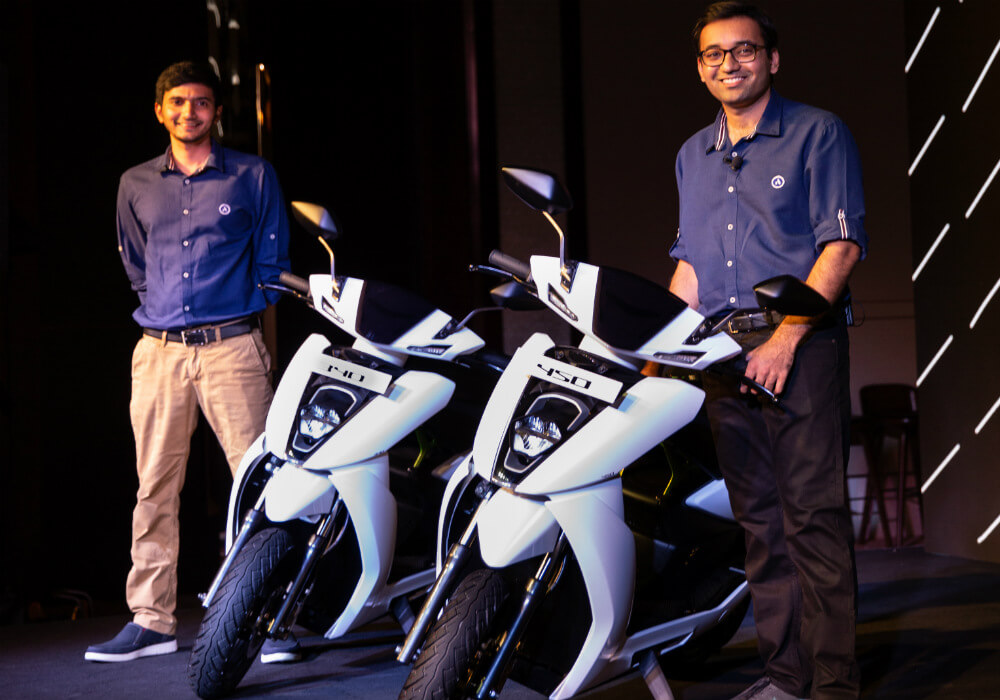 The products will initially be available in Bengaluru only. However, Ather Energy aims to cater to the Pune and Chennai markets by next year.

While launching the products, Tarun Mehta, co-founder and CEO of Ather Energy, said, “We started building electric scooters four years ago at IIT Madras and we are launching not only the Ather 340, but also our higher-performance flagship variant, the Ather 450. It has been designed with quick acceleration, great handling, high storage space, and new-to-category features like park assist, remote diagnostics, and onboard navigation.”

Along with Ather 450 and Ather 340, the EV startup has also announced an all-in-one servicing solution called Ather One at a reasonable INR 700 per month. The service will include fuel cost, (electricity bill), maintenance, consumables, labour charge, and roadside assistance.

Ebikes Ather 450 and Ather 340 have been priced at $1,859 (INR 1,24,750) and $1,635 (INR 1,09,750) respectively, inclusive of FAME subsidy, GST, road tax, and other charges. For the first set of consumers, Ather Energy is offering the first year of the subscription plan (Ather One) for free. The company will also provide a home charging point with the Ather 450 and a charging cable with the Ather 340. The price of these products and their installation will be waived off for these consumers.

The batteries, which come with a three-year warranty can run for 50,000 km in their lifetime. 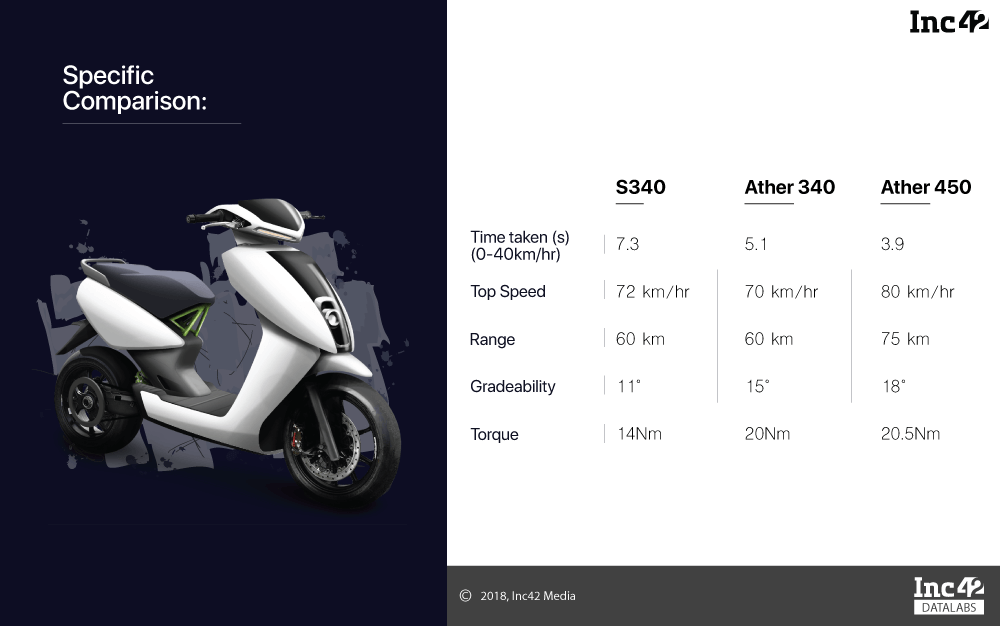 With a top speed of 80 km/hr, gradeability of 18°, and a torque of 20.5 Nm, the flagship ebike Ather 450 is capable of attaining 0-40 Km/s in 3.9 seconds. The ebike scores over usual ebike limitations and problems such as slow charging speeds, low-powered motors, and short battery life. As per the company statement, the battery can fast charge to 80% at the rate of 1 km/minute. It comes with a 3.3kW BLDC (Brushless DC) motor that can comfortably ride up 18° slopes, making steep parking lots, flyovers, and roads an easy climb. And, for the first time in the category, Ather 450 comes with parking assist, which allows riders to reverse into tight parking spots.

Ather 450 also has a seven-inch touchscreen dashboard that allows onboard navigation with options of choosing alternative routes (on GPS) and saved locations. The Ather app enables push navigation from the phone to the vehicle dashboard, remote monitoring of vehicle health, charge monitoring, and managing service requirements. Finally, with over-the-air (OTA) functionality, the performance of ebike is likely to improve with software upgrades that Ather will provide over time. 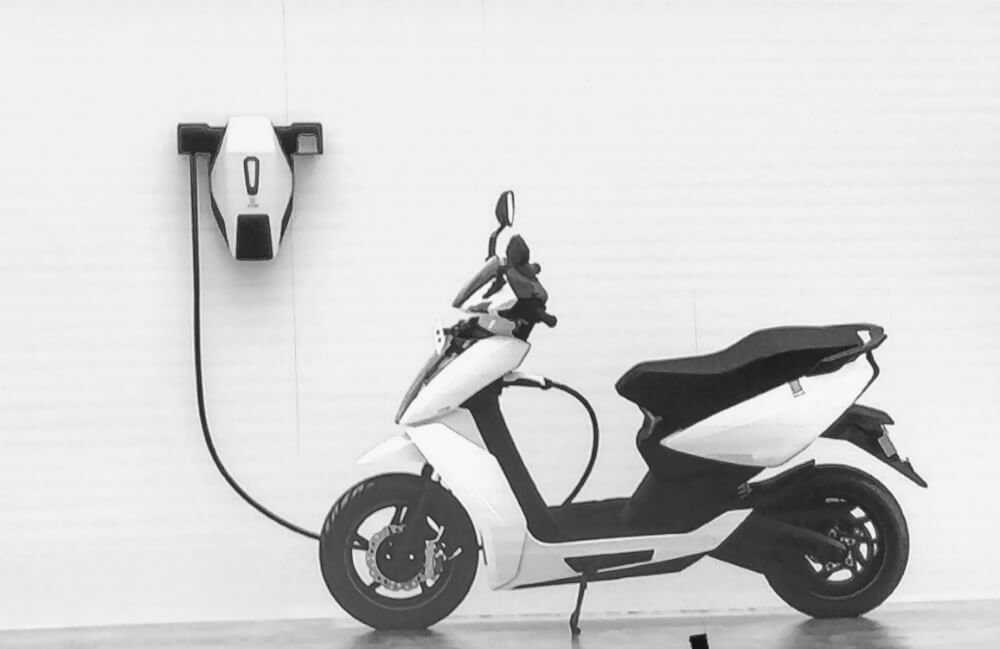 The ebike also comes with a home charging point, which can be installed by the company at either the owner’s home or workplace. Features like surge protection, authenticated power draw, and remote charge monitoring makes Ather’s charging point a fast, safe, and intelligent charger.

The other newly launched ebike, Ather 340, is an upgrade of the S340 that Ather Energy had unveiled back in 2016. Ather has also launched a new dealership and service model called Ather One. While the ordering, payment, and test ride scheduling is done online, the brand has opened its experience centre, AtherSpace, to give customers an in-depth look into and experience of the product. Servicing woes are also taken care of with a seamless doorstep pickup and drop service, which can be scheduled through the Ather app.

The Rise Of Ather

Co-founded in 2013 by IIT graduates Tarun Mehta and Swapnil Jain, the story of Ather Energy started with an aim to develop some eco-friendly solutions in the field of electric mobility.

Sharing the story of the initial days of Ather, Tarun said, “EVs have been there for quite some time now. However, we haven’t seen ebikes that could truly replace conventional bikes running on petrol. This is primarily because our cities’ infrastructure has not been built in accordance with EVs.”

“This was the time when we were into batteries and charging solutions. We felt that making just one product related to electric mobility was not enough. There was an urgent need to develop and launch an entire EV ecosystem and we soon started working on all fronts — batteries, charging system, software with better UIs, mechanics of EV, and so on,” Tarun added.

However, the startup faced a host of challenges in developing the EV ecosystem. One of the big challenges was how to provide a solution on a larger scale — something most EV companies have failed to to do so far.

Among others was the lack of a pool of talent which was required to develop the architecture. However, the company, today employs over 250 people.

On an Inc42 query as to whether government schemes such as FAME helps in shaping the EV infrastructure, Tarun said, “There is no doubt that the government does have some nobel plans and a holistic approach towards EVs. However, the execution has not been as per the policy expectation.”

While developing the ebikes, Ather has also looked into aspects such as servicing and maintenance, which are a headache for EV users. The company has enabled ebikes with remote diagnostic tools and with the help of the Ather app, one can just schedule a service appointment and a doorstep pickup and drop.

Another big problem for EV users is charging their vehicles. To solve this, the startup has developed home charging points and committed to installing more than 60 points across Bengaluru by the end of this year. Unlike Ola, which installed charging stations at Indian Oil stations, since charging of EVs is not a 10-20 minute affair, Ather Energy has installed the points at malls, restaurants, and coffee shops where users can lounge about while charging their vehicles.

Once the charging cable is attached to the vehicle, it self-validates the amount of charging done and the payment takes place in the backend, explained Tarun.

Other EV players that have either already launched their ebikes or are planning to launch are Okinawa eScooters, Hero Electric, Yobykes, Hero MotoCorp, Honda Motorcycle & Scooter India, TVS Motor, Mahindra Two Wheelers, Yamaha and Bajaj Auto, among others.

Hero Electric started selling electric bikes two years ago. Hero Motor Corp’s Manchester Unit also recently showcased its own ebike under the theme ‘Make In India, Innovate In Manchester’. Chennai-based TVS Motor is also developing an electric scooter, which may hit the roads in the next financial year. Also, recently, the electric superbike Emflux One made its debut in the Auto Expo 2018.

The central government after having initially announced to go all EV by 2030 has taken several U-turns since then. While the government has now also deferred FAME II for an indefinite period, the EV companies have kept their focus crystal clear.

While another EV company Emflux recently unveiled their EV superbike, Tata Motors has also announced a separate Electric Mobility Vertical to zoom in on its EV plans. The today’s launch of Ather Energy’s ebikes Ather 450 and Ather 340 along with the charging and servicing solutions will certainly push the country EV ecosystem envelope further.