Amazon India has more than 25 Amazon Fresh centres, with a 3x increase in processing space 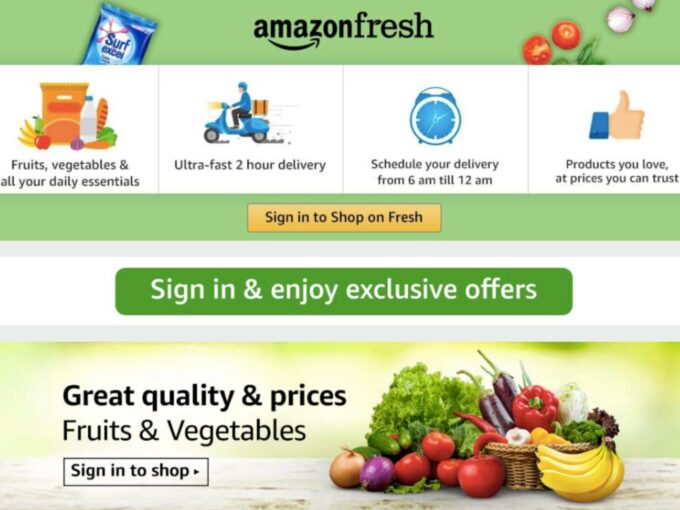 Amazon India, on Thursday (November 5), announced the launch of its online grocery store Amazon Fresh in four more cities, namely Kolkata, Ahmedabad, Pune and Chennai. The company says that the service has been launched in these cities through the expansion of its specialised network that enables ultra-fast delivery services of daily essentials and grocery under the Amazon Fresh Store on Amazon.in.

With this expansion, Amazon India has more than 25 Amazon Fresh centres, with a 3x increase in processing space. The company has also expanded its infrastructure with new centres in Bengaluru, Mumbai, Hyderabad and Delhi-NCR.

“The investment in these specialised centres is in line with our long-term commitment to invest in India and create hundreds of job opportunities. We have ramped up our operational capabilities in cities where we already offered this service and added 4 new cities ahead of the festive season to meet customer needs,” said Prakash Kumar Dutta, vice president of fulfilment operations and supply chain, Amazon India.

The Amazon Fresh online grocery store, available to users through Amazon.in, offers four-hour delivery slots from 6 am to midnight with free delivery for orders above INR 600. Orders below INR 600 will be charged a delivery fee of INR 29.

The Amazon Fresh store was launched in August last year for select pin codes in Bengaluru.

The scaling of the US-based retail giant’s online grocery offering in India can be seen as an attempt to tap into the increased demand for online grocery deliveries in India amid the pandemic when physical distancing guidelines have spurred many to keep indoors and avoid stepping outdoors for buying essentials.

In September, Inc42 reported that the online grocery market in India, which had recorded $1.9 Bn GMV (gross merchandise value) in 2019, could grow to $3 Bn GMV by the end of this year. This growth can be attributed to several factors, chief being the Covid-19 tailwinds for the segment. Online grocery stores witnessed a rise in demand while countrywide lockdown restrictions were in place.

Two of the earliest proponents of the online grocery model in India, BigBasket and Grofers, witnessed a surge in demand and sales during the lockdown. While BigBasket reported a 35% increase in sales in April, Grofers registered a 60% increase in its GMV, compared to pre-Covid-19 levels.

In May this year, India’s largest retailer Reliance also announced the full-scale launch of JioMart, an online grocery store in 200 cities. Since July, Reliance has been scaling up the offerings on JioMart to challenge the bigger ecommerce players such as Flipkart and Amazon. It is worth noting that JioMart offers free delivery for all orders, irrespective of their price, something the bigger etailers such as Amazon and Flipkart haven’t been able to match.

To challenge the competition from new players such as Reliance in the ecommerce space, Amazon is now looking to scale up its online grocery offering. Meanwhile, both companies are also engaged in a tussle over Reliance’s planned acquisition of India’s second-largest retail chain, Future Retail.

There are a few challenges inherent in the online grocery delivery model. The commissions in the grocery delivery space aren’t as attractive as compared to what food delivery startups such as Zomato get with the delivery of cooked food. The low order value also makes it very difficult for hyperlocal delivery players to actually make anything substantial out of it. Other problems include stock management as most of the retailers often don’t update the stock while taking orders

Zomato, which entered the online grocery delivery space in April with the launch of ‘Zomato Market’, wrapped up the business just two months later. This despite the company’s COO of food delivery Mohit Sardana telling Inc42 in April that the company had all the factors in place to sustain the new business model. “Grocery delivery has always been on our long term radar since it fits into our vision of ‘better food for more people’. Given the current need of our customers, we quickly sprung into action to serve,” Sardana had said.

Despite these challenges, Indian foodtech unicorn Swiggy is scaling up its online grocery delivery service Swiggy Stores. In August, Inc42 reported that Swiggy had launched the pilot for InstaMart, a convenience grocery offering, through which, the company is looking to offer the fastest deliveries in the segment, under 30-45 minutes, with day and night serviceability.