With Aadhaar, $8 Bn Worth Of Data Leakages Have Been Plugged: PM Modi

With Aadhaar, $8 Bn Worth Of Data Leakages Have Been Plugged: PM Modi 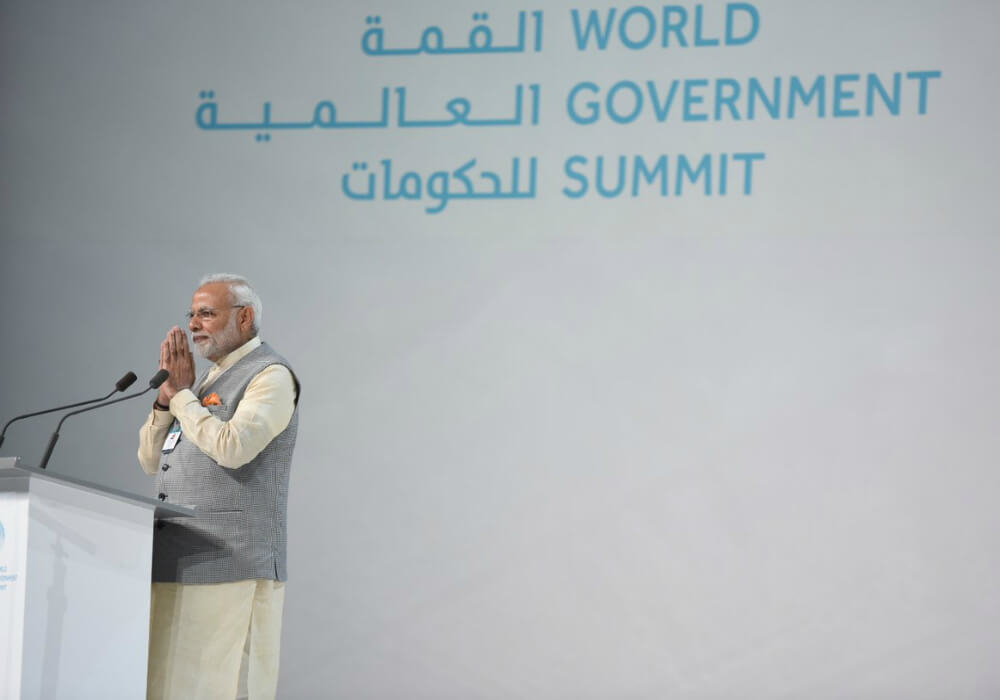 Holding technology in high esteem, PM Modi, while delivering his keynote address at the inauguration of the sixth World Gov Summit in Dubai, stated that technology-implementation has to be in sync with nature and should not repugn our nature.

Giving GST and Aadhaar as the greatest examples of a seamless marriage between technology and e-governance, Modi said, “With Aadhaar, $8 Bn worth of leakages have been plugged. There’s a digital payment revolution happening in India.”

Speaking on how Aadhaar has increased the efficacy of governance, PM Modi stated that the centre has saved $8.7 Bn (INR 56,000 Cr) through Aadhaar-enabled direct benefit transfer of about 400 government schemes.

“GST has become a reality in the country and India is aspiring to assume a leadership position in Artificial Intelligence, nanotechnology, cybersecurity and cloud computing,” Modi added.

“It has empowered the common man through minimum government and maximum governance. In e-governance, the ‘e’ stands for effective, efficient, easy, empowered, and equitable.”

Highlighting the achievements of the Startup India programme, Modi said India has enabled an ecosystem for innovation through Startup India and the country has become a major startup hub in the past two years.

While the PM said the technology has changed the lives of common men, he also lamented the fact that poverty and malnutrition have still not been eliminated completely, despite the empowering capabilities of technology.

Addressing an audience of 4000 leaders from across 140 countries, PM Modi cautioned the world against the deleterious effects of bombs and missiles.

He further added that technology must be used for the betterment of lives and must be in sync with nature. Technology must not be misused in a way that could harm nature and the society.

Earlier at a community hall in Dubai, PM Modi spoke about how the recent jump in ease of doing business ranking has helped India augment its image on the global map.

He said, “Earlier, we were at the 142th rank in terms of ease of doing business, i.e. it was easier to count from the bottom. However, showing an unprecedented reform, in the World Bank ranking of Ease of Doing Business, we now rank at the 100th position; a jump of 42 ranks – the first time in the history.”

“However, we are not here to stay. We want better our ranking further, and number of policy reforms are to be taken in this regard.”

“We are poised to bring India on par with global benchmarks,” added PM Modi.

Launched in 2009, Aadhaar is the world’s biggest biometric programme ever launched. However, the implementation of the same has attracted huge controversies pertaining to the right to privacy and lack of data protection bill.

While the Supreme Court’s final hearing on Aadhaar is still on, Modi government has now announced to implement Udyog Aadhaar, an Aadhaar like unique identity for enterprises too.

Like Aadhaar, GST too has received mixed reactions from people and private enterprises. One of the biggest complaints has been pertaining to the increased number of forms. While SMEs or startups whose turnover is less than $31K (INR 2 Mn) are not required to register for GST number, startups have something else to say, “If you won’t get the GST number, companies/people refuse to buy your products.”