Budget 2018: Govt. To Launch An Aadhaar Like Unique Identity For Enterprises Too

Budget 2018: Govt. To Launch An Aadhaar Like Unique Identity For Enterprises Too

Regardless Of The Size, All The Enterprises Will Be Bound To Get A Unique Identity Under The Scheme 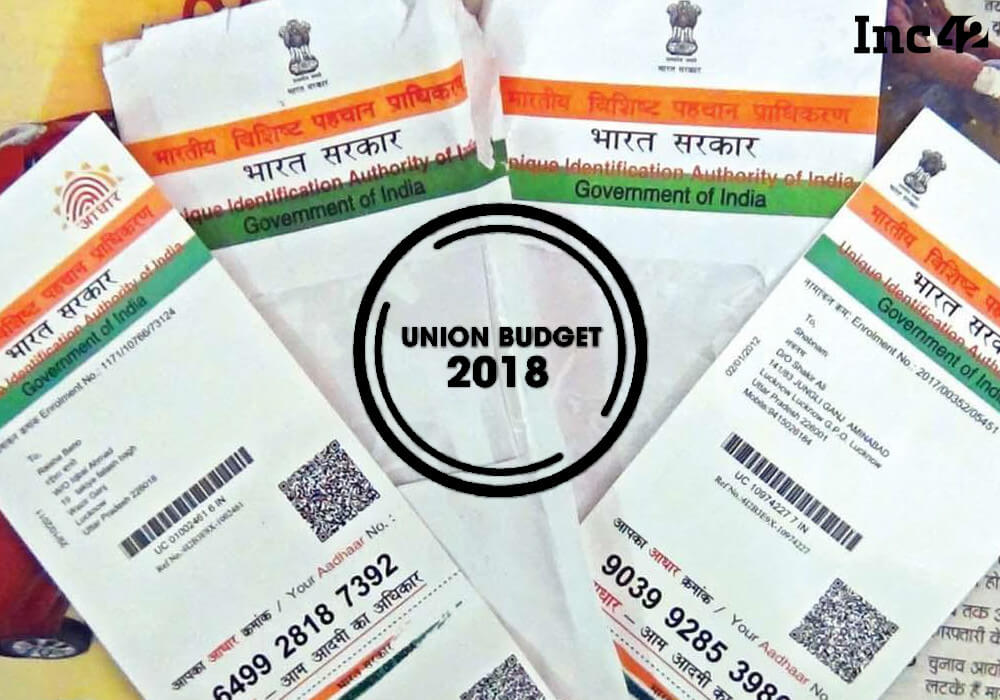 As part of the session, the Finance Minister has announced plans to launch an Aadhaar-like-system to assign a similar unique identity code to each and every enterprise in India.

Speaking of Aadhaar’s benefits during Budget 2018, Jaitley averred that Aadhaar, which provides an identity to every Indian, has made many public services more accessible to the people. He said, “Services and benefits are being delivered to the people at their doorsteps or in their accounts. It has reduced corruption and cost of delivery and has eliminated middlemen in the process.”

“Direct Benefit Transfer mechanism of India is the biggest such exercise in the world and is a global success story.”

The Finance Minister pointed out that every enterprise, major or small, also needs a unique ID. He said that the government will launch a scheme to assign every individual enterprise in India a unique ID.

Welcoming the Budget 2018, Sanjay Swamy, Managing Partner, Prime Venture Partners commented, “Unique identity is the foundation for any aspect of digitisation – as it helps credit and other service providers to make a decision based on trust easily. Aadhaar has proven the value for individuals already – and it’s great to see the government a similar infrastructure for business entities too!”

Besides reducing corruption when it comes to public money and services distribution, Aadhaar has also strengthened the digital payments ecosystem through Aadhaar Pay. With a unique identity assigned to each and every enterprise, regardless of the market size, greater transparency can be expected in B2B services and payments transaction.

Gaurav Hinduja, co-founder of Capital Float stated, “The development of unique identities along the lines of Aadhaar for individual enterprises will enable us to further our efforts towards financial inclusion, as we can extend digital credit services to MSMEs with little to no documentation.”

The announcement has come at a time when Supreme Court is hearing a batch of petitions on the very legitimacy of Aadhaar.

Private companies have also filed a separate petition urging the continuation of the programme, citing unique benefits that come with Aadhaar.

Commenting on Jaitley’s move to launch an Aadhaar like identity scheme for enterprises, Nagaraju M, CEO, Rentprop4u stated, “Another announcement was that the government is contemplating a scheme for providing unique business identity to every business. We hope some serious thought has gone into this. After the highs of 2015, the growth rate of startups has almost come to a standstill in the last year and a half. Measures such as these could adversely impact the sector as GST and demonetisation did in the past.”

As per the claims made by the Indian government, around $4.08 Bn (INR 26K Cr) has been saved so far on LPG subsidy alone through Aadhaar linked bank accounts, eliminating 30 Mn fake/duplicate LPG accounts between 2014-2016.

The government maintains its stance that Aadhaar is a game changer in the identification and inclusion of rightful beneficiaries, exclusion of ghost claimers, elimination of middlemen and plugging of leakages for transferring social welfare incentives related to various government-sponsored schemes.