a16z has made 150+ exits from companies including Airbnb, Asana, Slack, Facebook, Instagram, Skype, among others and its current portfolio as a lead investor includes 250+ startups, only one of which is Indian

Two of a16z general partners have tweeted, that backing CoinSwitch Kuber is the “first of many investments in India” 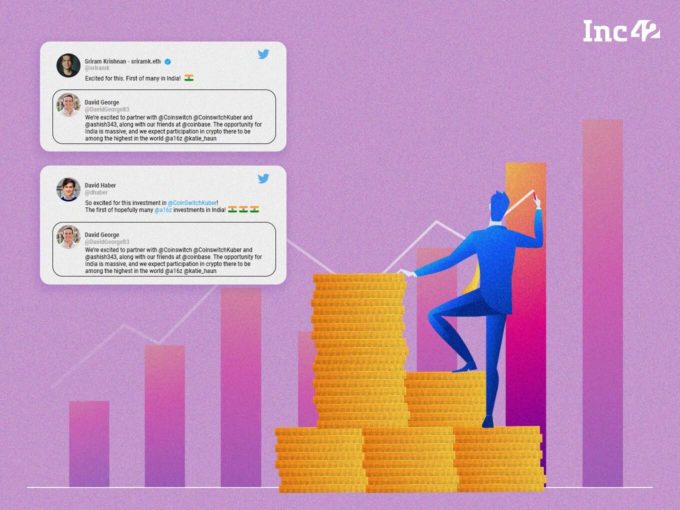 With an infusion of $260 Mn at a $1.9 Bn valuation, Andreessen Horowitz aka a16z made its first-ever bet in India in CoinSwitch Kuber — a crypto exchange startup, with from both its crypto and growth funds.

US-based a16z is one of the largest venture capital (VC) funds globally with over $19.2 Bn in assets under management (AUM) across multiple funds. This includes its crypto funds of about $3.1 Bn.

Coinbase Ventures, an investment arm of US-based crypto exchange Coinbase, that invests in early-stage cryptocurrency and blockchain startups, was also backed by a16z. The VC firm took an exit from the firm after its IPO listing on NASDAQ in April 2021.

a16z has made 150+ exits from companies including hospitality firm Airbnb, workflow management platforms Asana and Slack, Facebook as well as Facebook-owned Instagram, ride-hailing platform Lyft, fintech TransferWise, Microsoft-owned GitHub and Skype, among others.

The sector and stage agnostic VC firm’s current portfolio of 250+ startups in which it is the lead investor includes, foodtech Gobble, workplace automation IFTTT (If This, Then That), mediatech Buzzfeed, healthtech Bayesian Health Inc, edtech AltSchool, data integration platform Fivetran, among others.

“We are incredibly excited about the crypto market opportunity in India, and with its breakout growth, CoinSwitch has emerged as the leading retail platform in the country,” said David George, general partner at Andreessen Horowitz. “Ashish and the team [of CoinSwitch] have demonstrated strong execution abilities and the ambition to deliver an investment platform for the masses in India.”

The Indian cryptocurrency market was ranked 11th out of 154 nations in terms of crypto adoption and 6th in terms of DeFi (Decentralised Finance) by Blockchain data platform Chainalysis growing from less than $1Bn April 2020 to over $6 Bn in May 2021.

Yet, the Indian crypto market is highly volatile with regulatory infrastructure in the pipeline.

On the other hand, sectors such as ecommerce, fintech, edtech, healthtech and SaaS are high growth opportunities in the emerging Indian market.

The first Indian investment from a16z comes at a time when India ranks second in the world in terms of internet users and internet companies are raising record-breaking amounts of capital.

According to an Inc42 Plus report, in the third quarter of 2021 (Q3 2021), Indian startups raised over $17.1 Bn, which is comfortably the highest amount raised in a given quarter in India ever since we began recording deals in 2014. Additionally, the startup ecosystem has seen about $28 Bn invested in the last nine months.

To date, 72 Indian startups have joined the unicorn club, 30 of which joined the $1 Bn+ valuation club in 2021. Further, Indian startups are increasingly taking the public route, an indication that India is high-growth geography.

According to a few sources and media reports, a16z has evaluated a handful of other startups in India in recent months to invest beyond crypto. Meanwhile, David Haber, general partner at Andreessen Horowitz, took to Twitter commenting on the investment in CoinSwitch Kuber, while underlining that this is “the first of hopefully many a16z investments in India”. 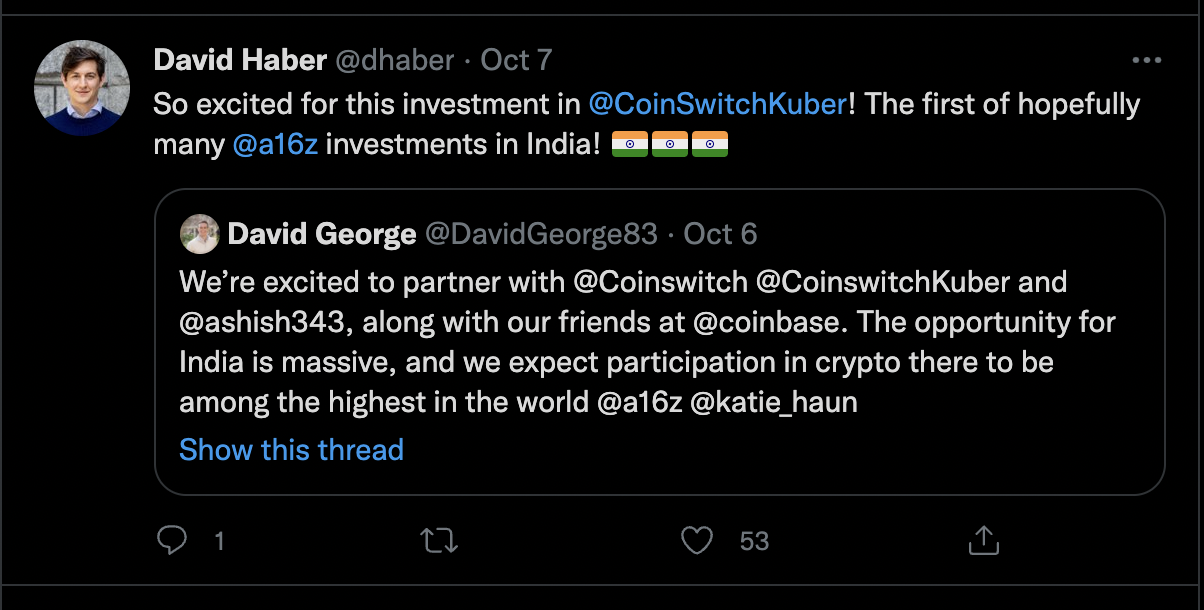 Sriram Krishnan, also a general partner at a16z, confirmed the entry of the world’s largest VC firm in India stating, “Excited for this [investment in CoinSwith Kuber]. First of many in India!” 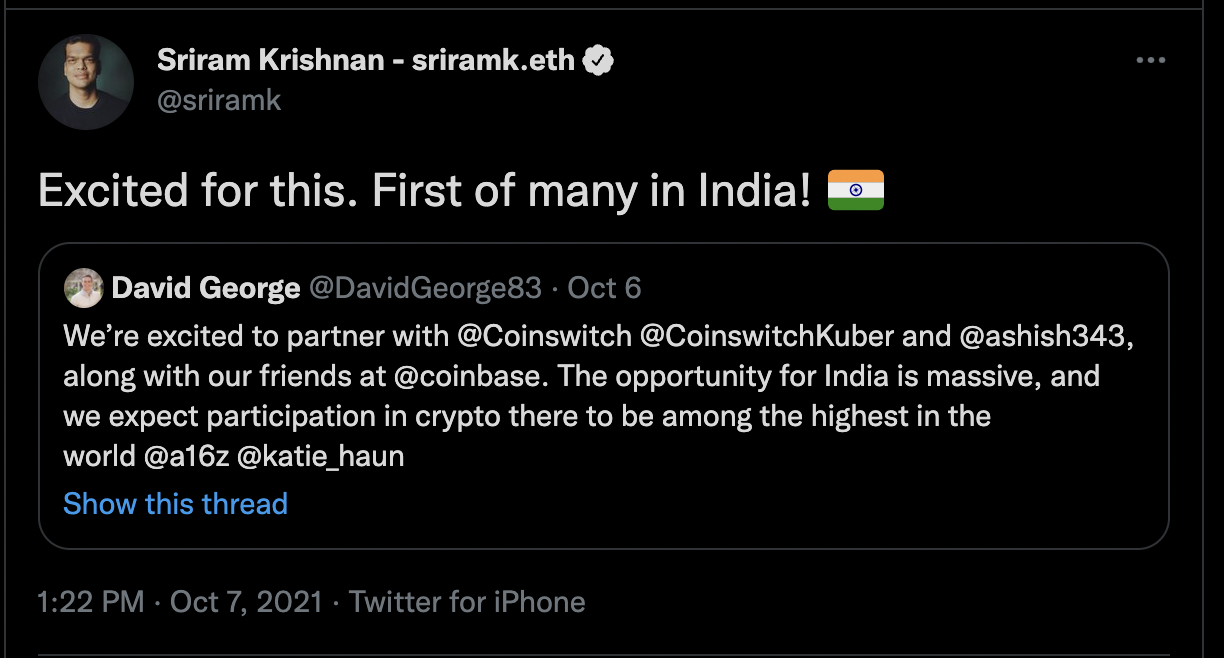 A16z will join several other global investors backing India’s startup story. Tiger Global, Sequoia, Falcon Edge Capital, Temasek and SoftBank — who have increased their pace of investments in the country in recent quarters.