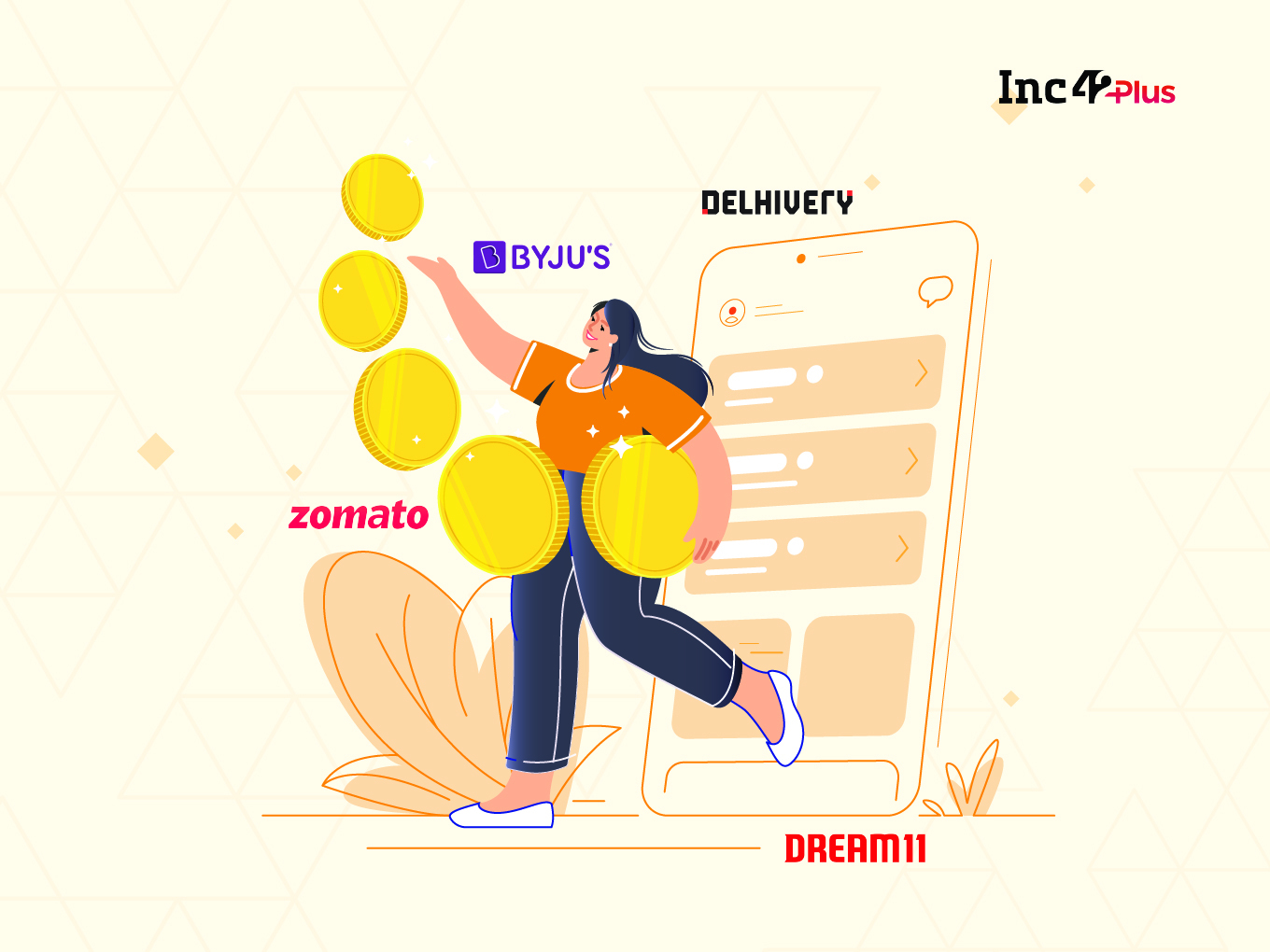 With $28 Bn raised in the first nine months of the year, the total startup funding in India in 2021 is already over 2x the highest recorded annual funding tally so far

Overall, the amount raised in the three months of Q3 alone — July, August and September — is higher than the annual funding raised from 2014 to 2020

The unprecedented surge in investments in Q3 has come on the back of a massive uptick in average ticket size for funding deals, with over 465 deals recorded

The record pace of startup funding in India in 2021 means that with each passing month, there’s a new benchmark being set.

In the third quarter of 2021 (Q3 2021), Indian startups raised over $17.1 Bn, which is comfortably the highest amount raised in a given quarter in India ever since we began recording deals in 2014.

Overall, the amount raised in the three months of Q3 alone — July, August and September — is higher than the annual funding raised from 2014 to 2020. 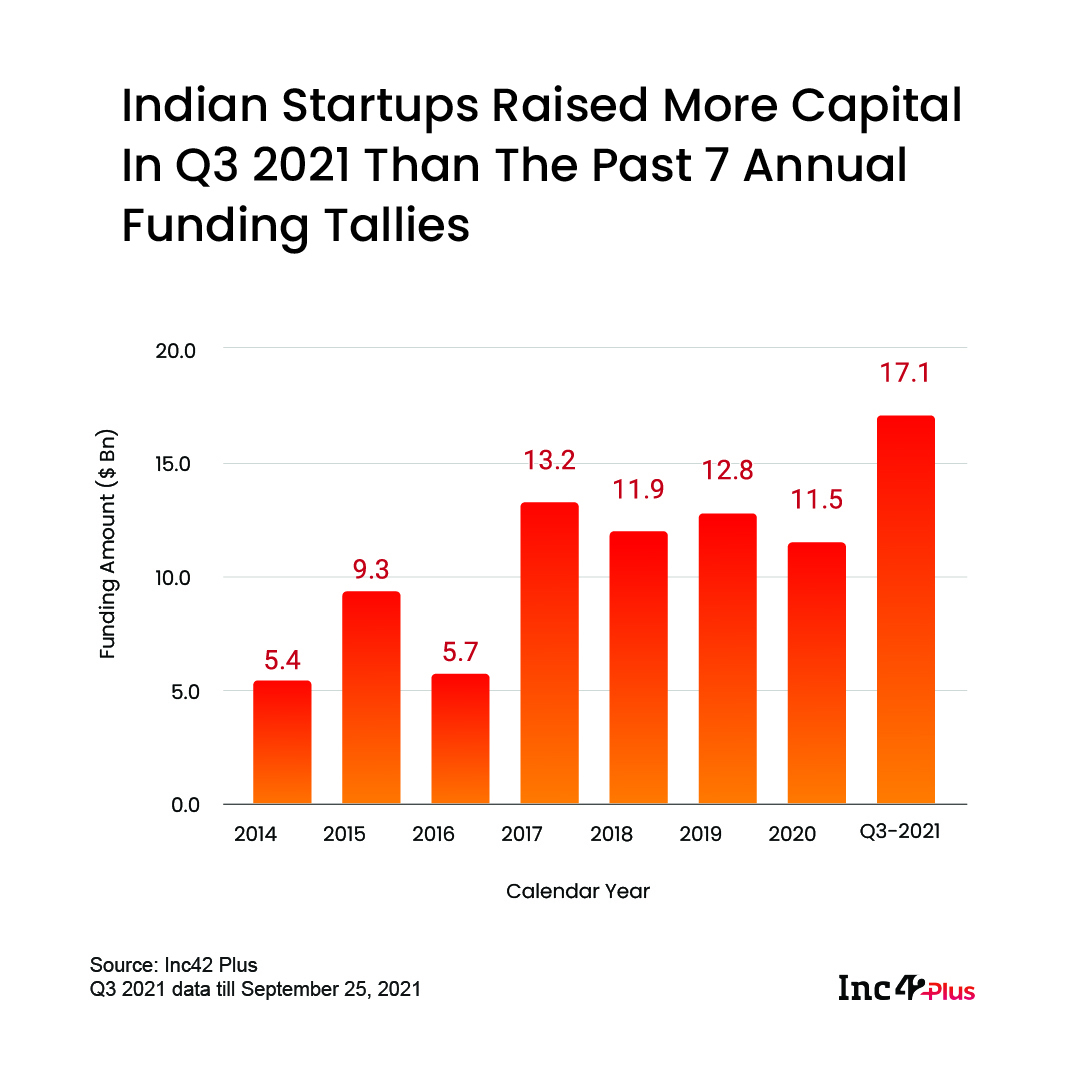 With $28 Bn raised in the first nine months of the year, the total startup funding in India in 2021 is already over 2x the highest recorded annual funding tally so far, which was $13.2 Bn seen in 2017.

Till H1 2021 (January to June 2021), Indian startups had raised $11 Bn raised over 614 funding deals. The unprecedented surge in investments in Q3 has come on the back of a massive uptick in average ticket size for funding deals, which is $43.2 Mn for the quarter, with over 465 deals recorded, again the highest so far — over 55% higher than Q2 2021.

Similarly, the number of deals was also the highest among the quarterly deal count since 2014, with Q3 seeing 150 more deals than Q2 of 2021. 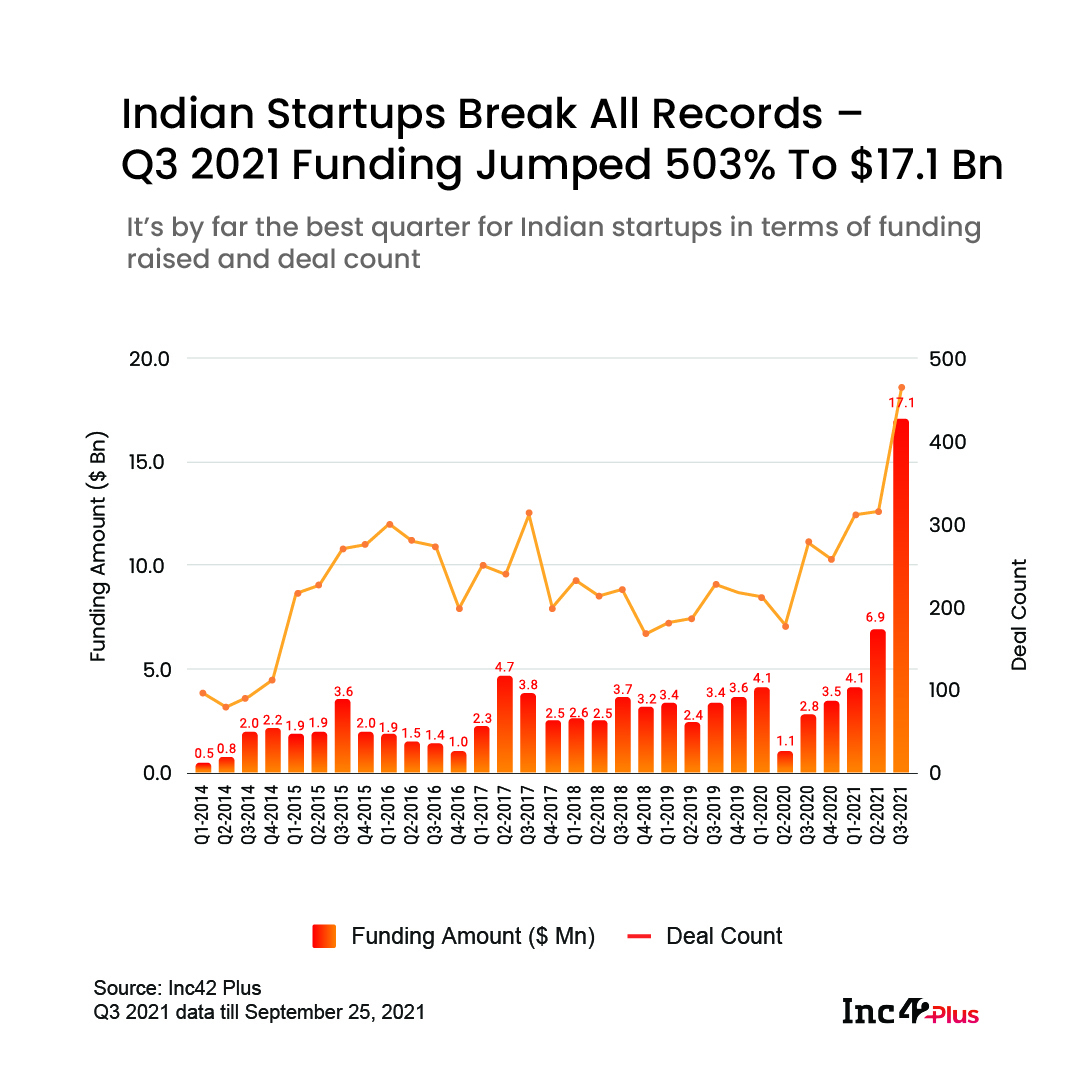 A bulk of the amount and deal tally has come in after the second Covid wave subsided in June 2021. The record funding tally has been primarily driven by mega-deals ($100 Mn+) in growth and late-stage startups. Till September 2021, we have witnessed 70 such mega-rounds, with eight of these deals involving rounds that exceeded $500 Mn.

Fintech saw the most number of deals in Q3 at 79, followed by the ecommerce sector, which recorded 72 deals in the quarter, led by increased investor interest in the D2C segment. When it comes to the funding amount, however, the two leading sectors swap places and ecommerce ended up with the lion’s share of the funding in Q3 at $5.2 Bn.

The Year Of Unicorns & Decacorns

The massive inflow of capital resulted in a record number of unicorns this year. Till Q3 2021, 26 Indian startups have crossed the $1 Bn valuation mark this year, including the first healthtech (Innovaccer), first crypto (CoinDCX) and first social commerce (Meesho) unicorns.

This year, the tech industry also saw three more edtech unicorns in the form of upGrad, Eruditus, and Eruditus, while Apna became the fastest unicorn, hitting the $1 Bn+ valuation in just 28 months.

Astonishingly, half of all startups that became unicorns this year achieved that mark in Q3 2021. Overall, India now has 68 unicorn startups which have a cumulative valuation of over $212 Bn and with over $62 Bn raised by these startups.

With unicorns becoming more common in India this year, the next phase for the Indian startup ecosystem will be about decacorns or those with over $10 Bn valuation. BYJU’S is the highest valued Indian startup presently with a valuation of $16.5 Bn, while the elite decacorn club also includes fintech giant Paytm ($16 Bn) and Walmart-owned Flipkart ($25 Bn).

The next decacorn could come from a group of late-stage companies such as OYO, Ola and Swiggy. Swiggy is reported to be in talks with investors to raise funds at a valuation of $10 Bn.

In recent months, we have seen the public offerings of Zomato, CarTrade, EaseMyTrip and others, which have captured the imagination of retail investors in India, and increased the hype around IPOs. The Freshworks debut on Nasdaq is seen as another major milestone.

While Paytm is planning India’s largest public market debut with its $3 Bn IPO (at a $30 Bn valuation), OYO is looking to raise $1 Bn from the public markets.

Further, epharmacy startup PharmEasy, omnichannel beauty retailer Nykaa, fintech startups MobiKwik and PolicyBazaar, logistics unicorn Delhivery and half a dozen other startups are also said to be going for an IPO by late 2021 and early 2022. Despite the risks or challenges, market analysts and sector experts are bullish on the IPO potential of tech startups and new-age companies.