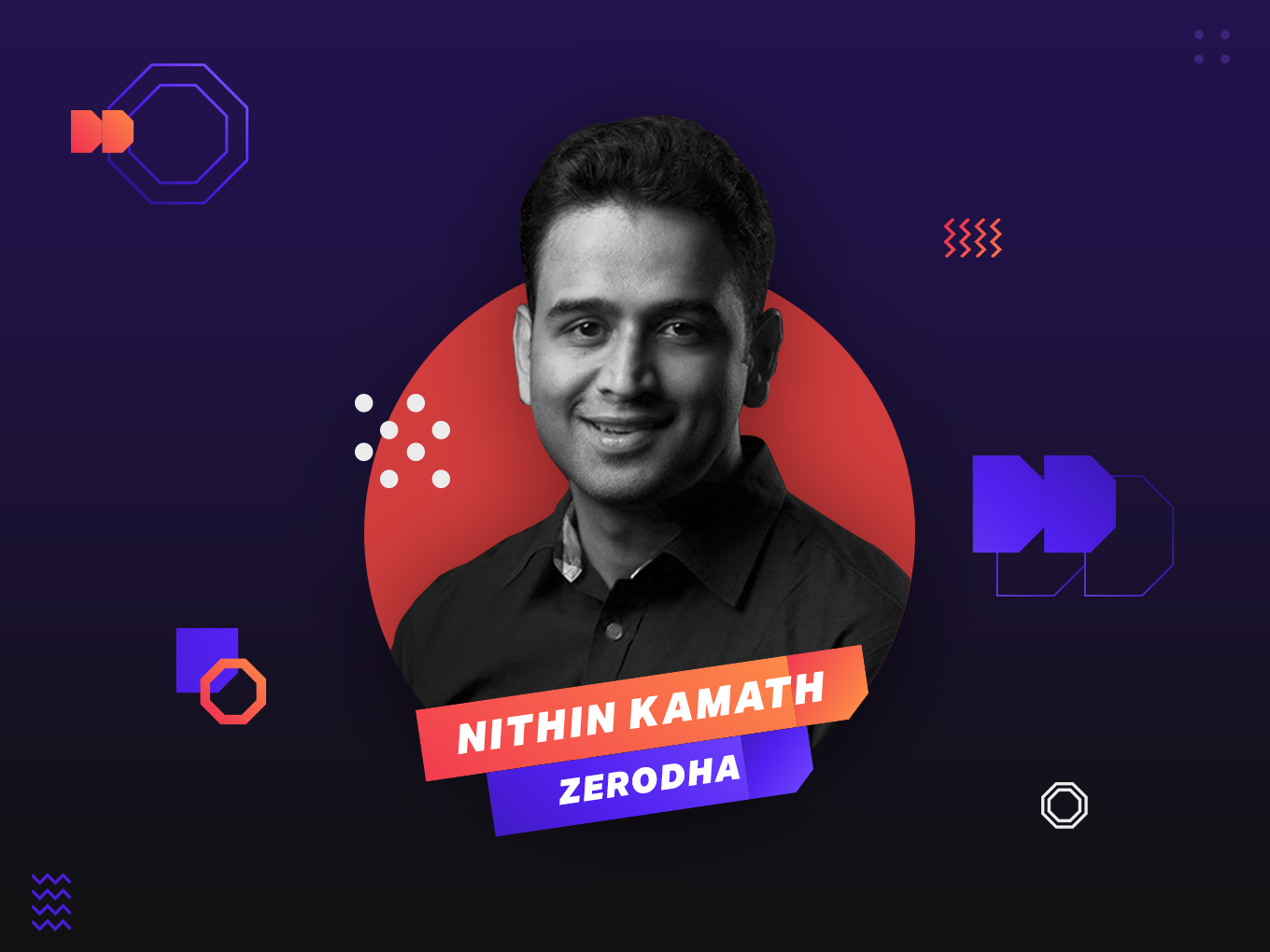 The fintech CEO says startups often obsess about getting a product right before going to market, but they lose focus on improving it incrementally thereafter

“Building a product around money is extremely complex — the product has to be simple for people to understand and use. Educating the customer about the product is extremely important,” — Nithin Kamath, founder and CEO, Zerodha

As far as financial products go, Zerodha is one startup that can lay claim to knowing what works in India. The biggest brokerage company in India in terms of active clients has not only created one successful platform but three products that can shine by themselves, but are part of a holistic approach to investments — a philosophy that has guided Kamath and the newly-minted unicorn.

While Kite, the stock market investment platform is its most well-known product, Zerodha actually began its app journey with Zerodha Varsity (an investor education product) in 2014. Following this, Zerodha launched the Kite Connect API for third-party investment platforms followed by Kite in 2015 and then Coin, its investment app for mutual funds and SIPs in 2017.

Through this Zerodha has remained a bootstrapped company, and recently valued itself at over $1 Bn after an ESOPs buyback plan. Targeting first-time investors in the Indian market, Kamath told Inc42 that building products today is about knowing your audience.

Unlike most other apps or platforms, financial products need to stick close to the regulations and this can make or break a company. While consumer-facing ecommerce or delivery apps win on the power of their tech and distribution, having a person whose core competence is finance is critical for building fintech products.

“Financial products have to work under rules and regulations. Otherwise a small mistake can cost you quite a bit,” Kamath highlighted. He is of the view that though one can build a product for 20-30 crore Indians, it’s very difficult to generate revenues from that entire demographic.

The other big challenge — arguably the most important for any financial tech product — is building credibility with users and potential customers. While ecommerce purchases, P2P payments and others are need-based and transaction-oriented businesses, investments are a long-term game and therefore, one key success factor is conveying the staying power to the customer. 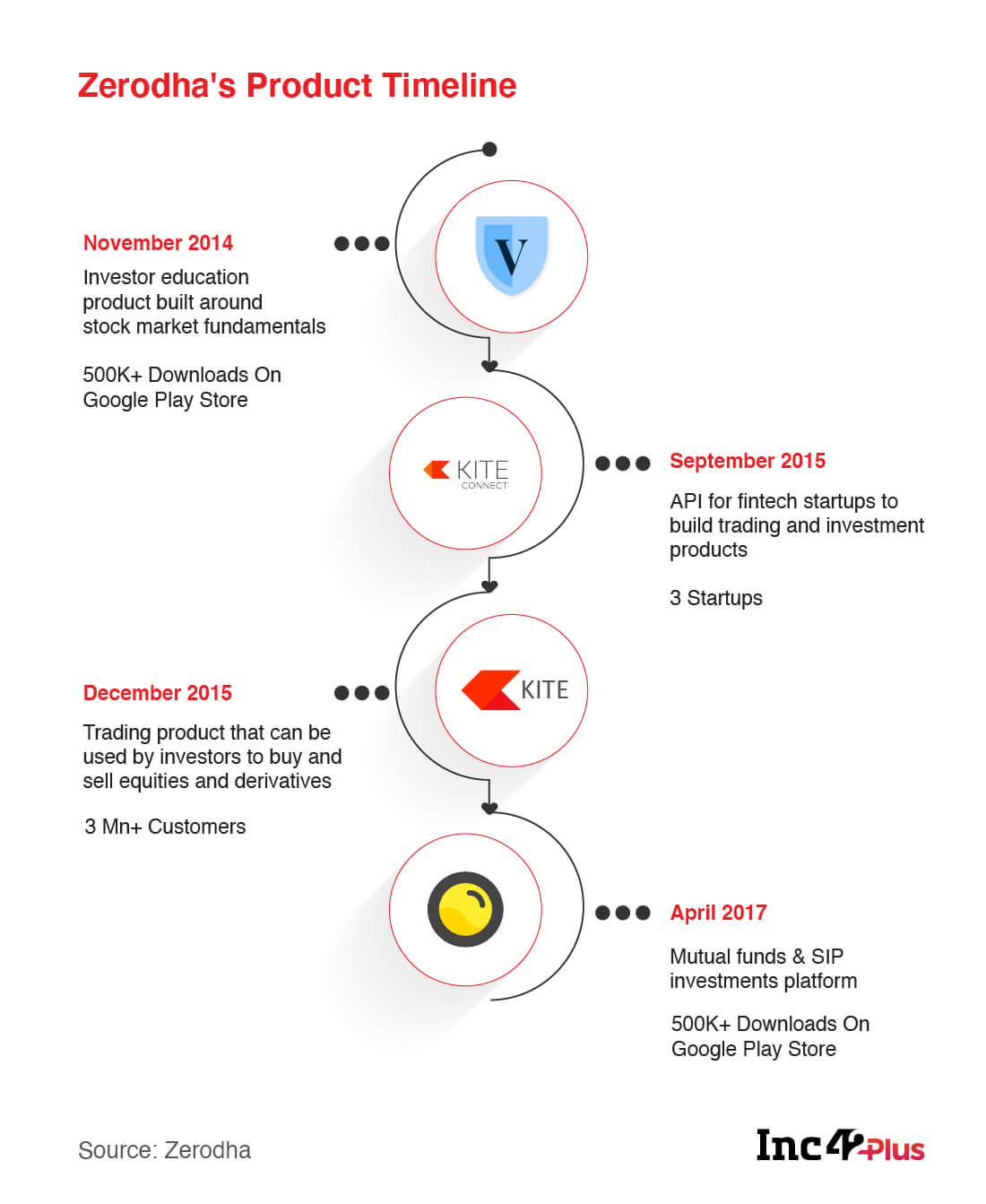 In the first three years of its existence, Zerodha claimed to have added 10,000 users, but then its audience grew by leaps and bounds when it reached the credibility mark, which took seven to eight years. Today, it cumulatively has over 4 Mn+ users across its multiple apps, using its platform, transacting and generating revenue for the company.

Product Vs Feature: The Age-Old Question

“I think a problem that a lot of founders have is they end up listening to what a lot of customers say and then their business keeps changing directions because of that,” Kamath said.

For Kamath, the key product-building insight is that it’s not always about listening to users and adding features. It’s about keeping the business goals in mind and then building, while also balancing the needs of the customers and their feedback. “For the first five six years of our business, we kept listening to what customers wanted and then we realised that it would just slow us down and it would be like a ping pong ball. We would have kept bouncing from one place to another,” Kamath, who is speaking at Inc42 and TPF’s The Product Summit in October said.

The way out was realising that catering to edge cases at an early stage is futile. This is something most agile product development teams would agree with. But in the case of Zerodha, there’s the added implication that products need to be stress tested fully, so no one loses money because of a bug in the app. So adding new features is not just tricky, but can complicate life terribly as has been seen in the past.

Over the past year, Kite has suffered several glitches which caused a social media stir with angry traders lashing out against Zerodha. This was not the first time that a bug or issue in Zerodha’s platform inconvenienced traders. In February last year, Kamath apologised to customers and wrote: “The toughest decision to take as a business at our scale is to change or not. Because every change comes with a business continuity risk. It is very easy to stop taking that risk and be happy with the product offering and wait for years to make small changes.”

This is something that Kamath espouses now. One way the company is looking to mitigate these issues is by building its technology requirements in-house. While it started out leveraging tech by vendors and partners till about 2014, over the past five-odd years, it has focussed on doing the heavy lifting in-house. According to Kamath, whenever a startup has an option to build something by themselves they should just build it rather than relying on vendors since ultimately external technology slows things significantly even though it might be a launchpad initially.

Today, the company claims to have a lean tech team of around 30 employees, where everyone is encouraged to be the owner of a product. “We don’t really have the traditional product manager kind of function. The guy developing is also a product manager because he’s been doing the same thing for many years, and he’s got so much core competency,” Kamath said. Core competency is something Kamath kept coming back to. It’s reflected in the company’s product offerings, which are all related to the stock markets.

Even with the loan against securities feature that’s due to launch within Kite soon, which is lending blended with stock markets. The LAS is a secured loan which requires a borrower to keep their securities such as shares, mutual fund holdings or bonds as collateral with financial institutions. The amount of LAS a borrower is eligible for will depend on the security they hold and how a financial institution grades them instead of the traditional credit history.

These new features are not always possible with a vendor as it’s very tough to customise on top of a third-party product, especially in the Indian context where regulations are very dynamic. There’s also the problem of vendors not being ready to keep pace with the scale that companies want.

“To build a business you need your product to be differentiated but if you end up offering the same thing as someone else why will the customer use it. And it’s very tough to build such USPs if you are building on top of vendors,” Kamath said.

Of course, building a proprietary platform means that the tech investment needs to be continuous and for a bootstrapped startup, that means being on top of the core business. He cautions that startups too often spend a lot of time perfecting a product before going to market and then lose focus on improving the core once it’s out.

In Zerodha’s case, it was also about how the company wanted to grow. “It’s almost like a reaction — the investor asks for growth and everyone in the company gets wired for user revenue growth and then you build business for that,” Kamath emphasised.

While VC funding might help a startup scale fast, it may also turn toxic — there have been plenty of lessons about startups failing because they raised too much cash. The pressure from the VC to get returns on their investment in 5-6 years is one not many businesses can handle and this is something that Zerodha wants to skip over completely.

“If you ask anyone at Zerodha, no one will say they have started a year saying this is how much revenue you want to get or started a month saying how many users you want to get… but we have always constantly said this is how we will improve the quality of our support and products..and we have been lucky that user growth has happened,” Kamath said.

Competing With The World’s Best

Legendary product designer Jonny Ive, who built a slew of iconic Apple products such as the iPod, iPhone, iPad among others, once said “Simplicity is not the absence of clutter… The absence of clutter is just a clutter-free product. That’s not simple.”

While the tricky problem of balancing simplicity, form and functionality in products predates digital products and will persist as long as humans exist, Kamath offers an interesting take by drawing a comparison between Zerodha and Robinhood, a US-based stockbroking counterpart and fellow unicorn.

A huge chunk of Zerodha’s revenue-generating customer base consists of active experienced traders who seek every tool possible to analyse and make trades on the platform, while Robinhood looks more beautiful since it’s not addressing the less experienced trading crowd. Having used broking apps from all over the world, Kamath claimed there’s no reason to not consider Zerodha’s design world class given the pace and scale at which it processes trades on the stock market.

“The goal for every entrepreneur should be everyday you should know that you have done something that made your product or your business better.. As long as that is there it will eventually get world class at some point.”