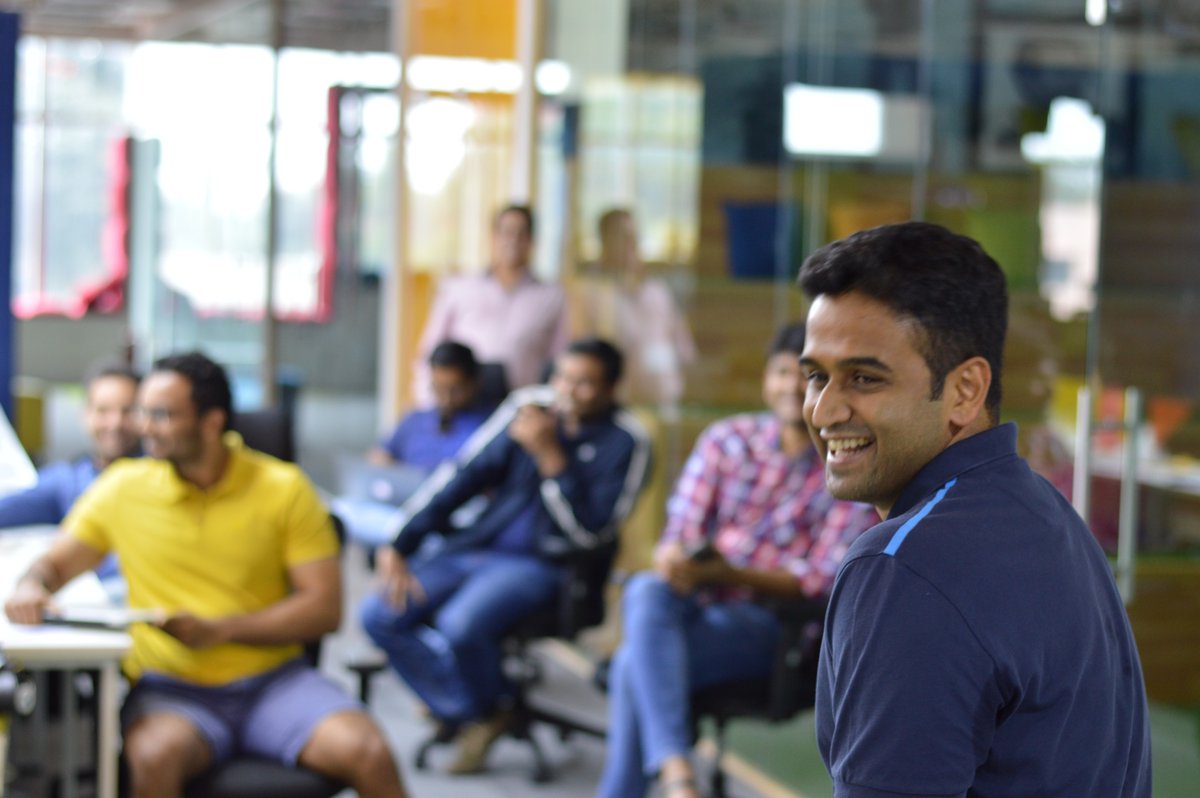 Nithin Kamath started investing when he was just 17 years old.

He learnt the ins and outs of stock trading and investing with hard-earned experience, learning the ropes on his own and even going bust at one point of time.

“If you are a novice to the stock market, you should go in for mutual funds. But the problem with mutual funds is that they can never make you wealthy. However, it is a great way to get started. But once you have your money on the table, you should start following stocks. Today, people don’t have the bandwidth to do too many things, but if a person can focus on companies in an industry he works in and understands, he has better odds of finding that next Infosys or Reliance of the world,” says Nithin Kamath, founder of online discount broking firm Zerodha.

These words are worth their weight in gold for any novice looking to tread in the market. Nithin began working at night in a call centre to trade during the day, climbing up the ladder with Reliance Money as a sub-broker, to finally making his big kill by shorting (betting against) the market in 2008, when it crashed.

A year later, with money no longer a prime concern and his younger brother Nikhil as his partner, Nithin focussed his energies on taking a shot at a retail brokerage firm around the idea of discount broking.

– was born in 2010, with a focus on two major things – cost and transparency.

Says Nithin, “When we started, it was essentially two things that we were focussing on. One was cost – because online traders don’t require all the frills of local offices. So by setting our operations online, we could pass the cost benefit back to the consumer. The second was transparency, as the best financial firms across the world are most opaque in the way they charge for their services.”

The road to these objectives was hardly an easy one. Given the fact that Nithin did not come from a broking background per se, understanding the regulatory or compliance aspect of the business and figuring it out was an initial challenge. His path was made no less difficult by the presence of so many regulatory hurdles and regulators such as SEBI (Securities Exchange Board Of India) and the bourses. Added to that, there was the requirement of an INR1 Cr-INR1.5 Cr security deposit for setting up the firm, hardly an undertaking that a bootstrapped company could take up.

Nithin says, “You have to be really well funded to give it a shot. Today, we call it passion but it probably sounded foolish back then. Once we had put in the deposit, there was very little left in the company’s bank – it was like an all-in trade.”

But five years down the line, with over 5% of Indian retail market turnover today reportedly going through Zerodha, Nithin’s gamble seemed to have paid off well.

When Zerodha started, it essentially targeted independent traders like Nithin who were actively trading on the market and for whom costs made a big difference. These traders didn’t really care if the broker was providing research. All traders who trade on their own just need a platform to execute buy/sell orders. However, with time Nithin realised that this market was shallow and in order to grow bigger, the focus had to shift from this model. 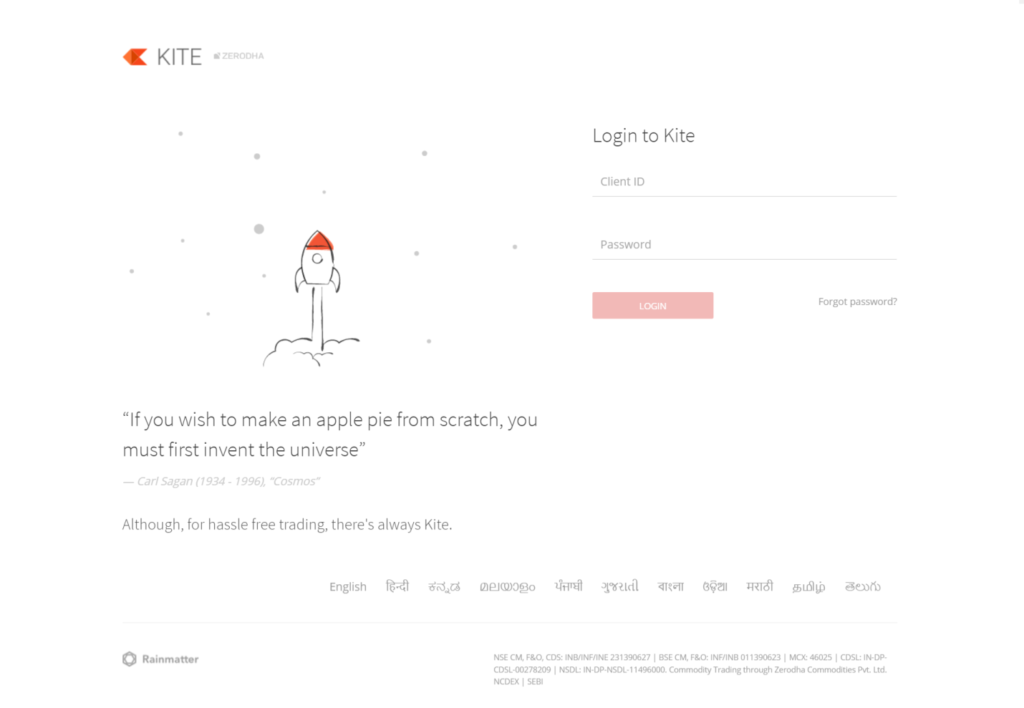 Today, the platform has morphed into a place to invest in the market for anyone and everyone. With features such as zero brokerage and a bunch of informative and cool analytics on the trading platform, Nithin is aiming to rope in the next 20 Cr-30 Cr Indians in the market, up from the 30 Lakh Indians who actually invest in the market, as of today.

“A good platform does not alone pull in more investors. If you are already investing in the market you will appreciate the platform but if you are not, you can’t do much with a beautiful charting platform. That’s the kind of point we hit last year. So our next long-term motive is to get the next 20-30 Cr Indians in the market,” he says.

While it took Zerodha three years to reach its first 10K customers, that base has now swelled to over 1.9 Lakh consumers. In the last financial year, revenues reportedly touched INR 120 Cr, with over INR 65 Cr-INR 66 Cr in pre-tax profit. As per Nithin, Zerodha has been growing at 100%  year-on-year and next year, it expects to touch INR 200 Cr in revenues.

This spurt in numbers is expected to come on the back of its decision to make trading in equities absolutely-free. It was in December 2015, Zerodha became the first Indian brokerage to go completely brokerage-free for equity investments. That decision alone brought another 90K people in its fold – essentially the same number it had added in the first five years of business, as per Nitin!

Today, the platform has morphed into a place to invest in the market for anyone and everyone. With features such as zero brokerage and a bunch of informative and cool analytics on the trading platform, Nithin is aiming to rope in the next 20 Cr-30 Cr Indians in the market, up from the 30 Lakh Indians who actually invest in the market, as of today.

Nithin explains the logic behind slashing the INR 20 levy on equity trading (which is intact for futures/options and intraday trades) to zero. “It has been almost a year that Zerodha decided to go brokerage free on equity investing. While all the traders were finding the platform attractive, we wanted to break into the investing side of the market as well. We are trying to be a one-stop shop for everything. Between INR 20 and 0, there is not a big difference, but that whole zero thing worked well because turned into eye candy. Also, the investing side of market is a much bigger piece compared to the F&O side.”

The decision also boded well for growth at the firm itself. Starting from just four people to hitting 250 people last year, the team has now grown to 496 in a matter of a single year.

It is small wonder then that the firm is hoping to open a million accounts in the next two or three years. And its enthusiasm is not unwarranted. When one looks at the volume of trade that happens at BSE/NSE through Zerodha, even though Nithin terms this metric as ridiculous and unreal as the GMV number, it is about INR 8K Cr-INR 10K Cr on a daily basis. Or to put it more realistically, Zerodha does 5% of Indian retail market turnover today. Which puts it way ahead of everyone else in the retail brokerage business.

A Bootstrapped Business And A Minimalist Platform

Yet another feature which sets it apart from other startups is Nithin’s decision to steer clear of outside money. That’s a different story that today Zerodha doesn’t need investors signing out checks to it. But even from the beginning, when Nithin was a sub broker with Reliance, and also involved in providing portfolio advisory services, he did not much appreciate the obligation that came with answering to someone else’s money.

He quips, “I could have raised external funds but as I said, this whole obligation of picking up a phone call any time of the day to answer is something that I did not want to go through.”

Of course, once the firm turned profitable in its second year, there was never a need to look in that direction. Neither did it need to indulge in heavy advertising or investing, so never felt the need to ever raise big bucks. 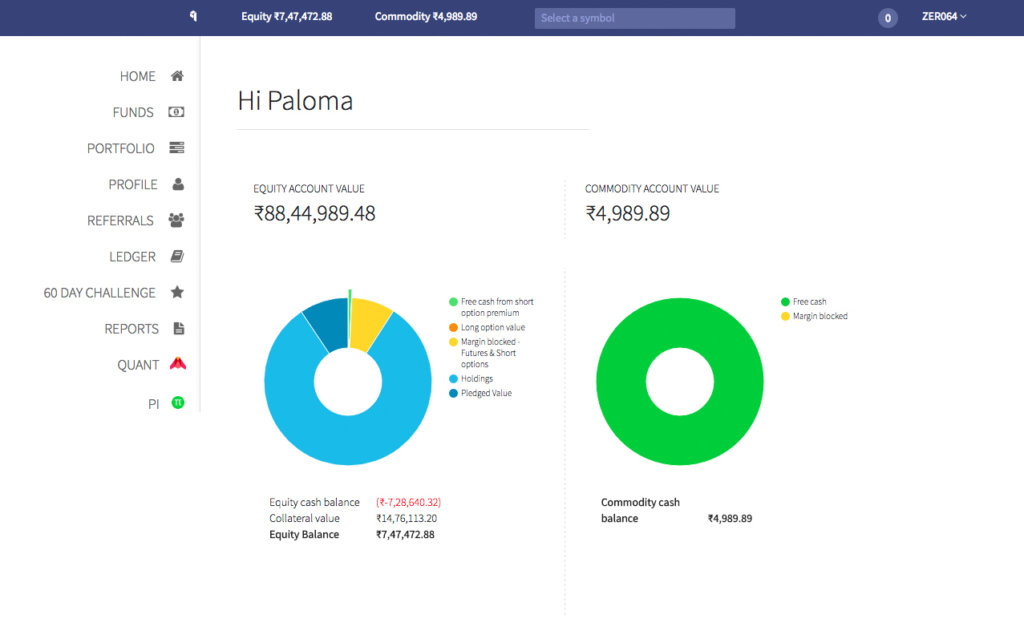 But Zerodha’s real differentiator as compared to similar startups in the domain such as app- and web-based investment management platforms, Tavaga and Scripbox or Kalaari-backed online trading platform RKSV or other brokerage firms like Infoline, Sharekhan and Edelweiss, is its technology.

Says Nithin, “It is not the pricing but the technology that is getting us the attention. I think we probably have the coolest fintech team in this entire capital market business in India. The features you see on it are something you are most likely seeing for the first time. We have taken a minimalistic approach to it while most platforms tend to clutter their platforms to make it seem advanced. Instead, we took an opposite approach – we will just show you what is required to be seen and not really clutter it up with unnecessary information.”

Big Fish In A  Small Pond – Impact Of Growth

With growth, has come the proverbial dilemma – of becoming a big fish in a small pond.

Explains Nithin, “Even if you have a really good execution platform, only people who know how to execute will benefit out of it. What about those guys who never executed a trade? And in India, this segment is big. Potentially India has 18 Cr-20 Cr Indians who can invest in the market whereas only 30 Lakh Indians actually do. So, we had to figure a way to grow the market and tap this segment.”

Thus, started Zerodha’s association with startups through the Rainmatter initiative in 2015 – a first of its kind incubator that focusses exclusively on startups that are developing technology products for the financial services sector.

Nithin’s idea was simple – he did not want to build everything on his own. So, collaboration with startups in the fintech sector would ensure that more people came into Zerodha’s folds through these startups. Startups, on the other hand, would benefit from the strategic value and the capital provided by Rainmatter. Simply put, Rainmatter intends to fund all startups which will help grow the capital market ecosystem in India. First rounds are normally capped at $500K. 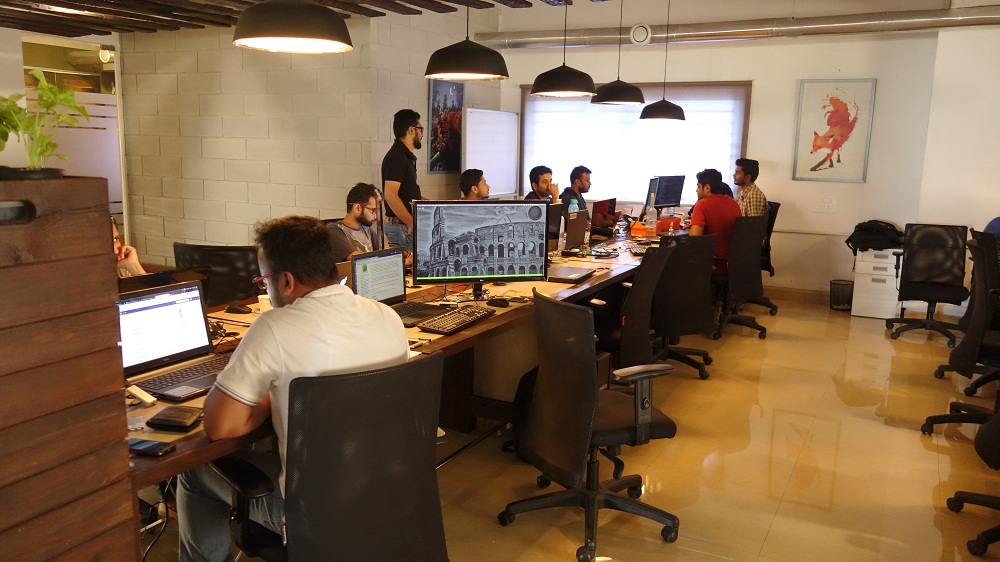 Meanwhile, besides Rainmatter, Zerodha’s next offering is its revamped reporting platform Quant, which is essentially visualisation of trading performance and behaviour. The platform, which was built three years back, is being revamped and is expected to be up by next month. Having forayed into the regional languages trading platform in Kannada, Malayalam and Punjabi this year, the startup also launched its web-based trading platform KITE in Gujarati language. On the anvil are plans to launch it in all the major regional languages including Telugu, Tamil, and Marathi.

Zerodha’s proposition is simple – to make the benefits of investment possible to everyone, to reach out to the next million participants who are currently not investing in the market and show them how the stock market can create wealth if invested for a long term. The scope is immense – so much so that Nithin believes it is not just Tier II, Tier III cities, even the potential of Tier I cities have not been fully tapped by fintech startups.

Additionally, given the demonetisation move, this proposition increases manifold. More money in the bank is good for any fintech business as people turn away from real estate and gold to stock markets too. So, while there is early pain in the market in the short -term as stock prices have been hammered and participation has dropped, in the long-term, the move will bode well for the startup as more people take to equity investments.

The real test for Zerodha will be to gather this wide audience while maintaining this minimalist, customer-first approach. It will be interesting to see how the scrappy startup wins the trust of its intended target markets in the coming times.