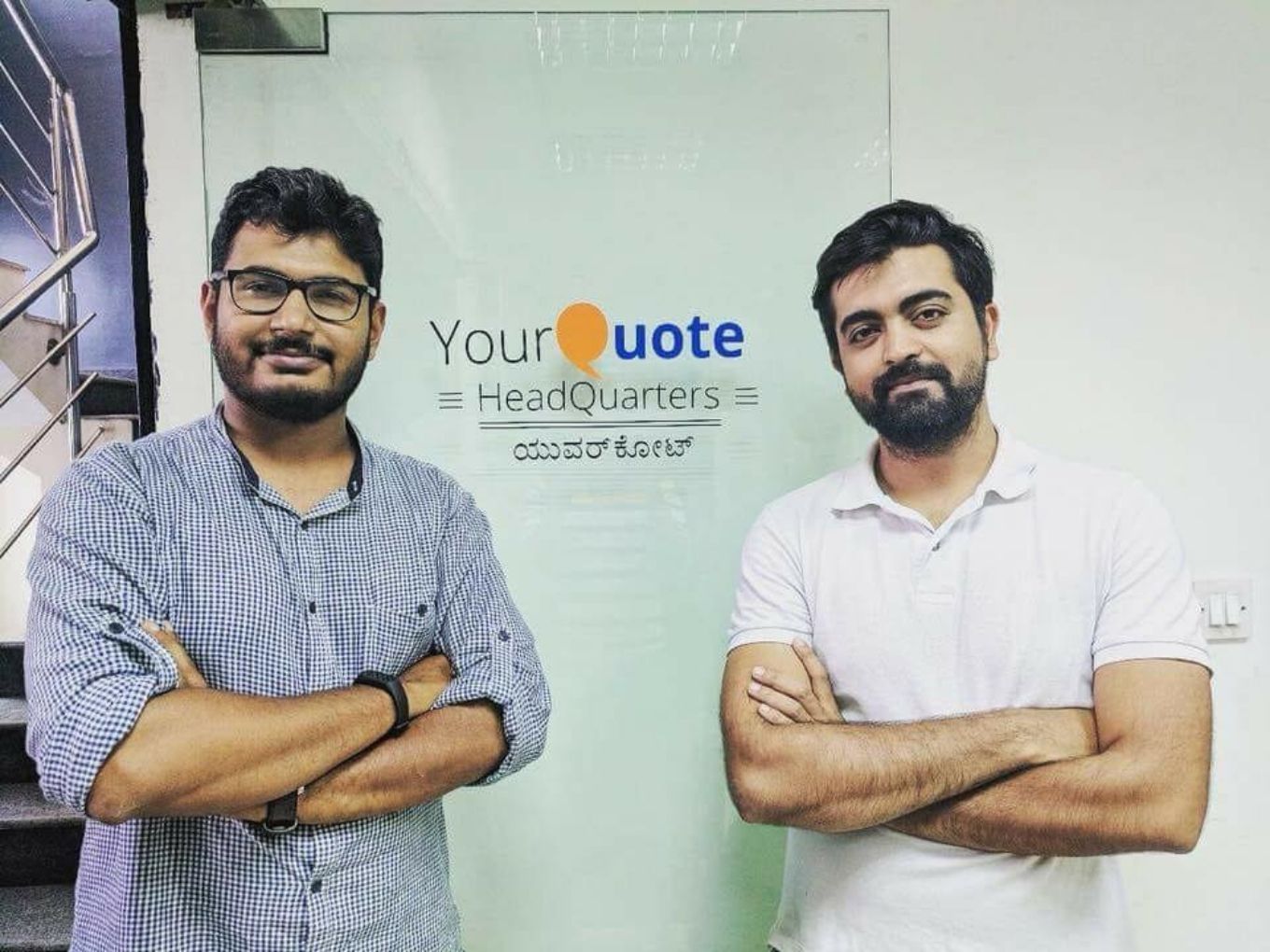 YourQuote claims to have 4 Mn installs, with 70% of the user base coming from Tier 2 and Tier 3 cities such as Patna, Indore, Lucknow

Back in 2003, the music industry went through a sea change as streaming changed the game. With the rise of Apple’s iTunes and the likes of Spotify, Pandora and others to follow after, the access and distribution channel for music changed altogether from selling whole albums to royalties for tracks streamed by users.

Apple leveled the playing field for many independent artists that could not get record deals. A similar revolution is now taking place in the writer community with ebooks and self-publishing platforms like Wattpad and Kindle, through which writers are able to launch their own careers. But while this has always been about novels and books, Bengaluru-based YourQuote is looking to bring the same revolution for short stories and poems, and it’s already seeing some encouraging numbers to vindicate its model.

“In 10 days of launching micropayments, we have had 6000 single stories sold and 1500 subscriptions. Over 7,000 writers have got royalties so far and the number is only going to increase,” said Harsh Snehanshu, cofounder YourQuote.

Founded in 2016 by Ashish Singh and Snehanshu, YourQuote is a platform for sharing quotes, poems, and short stories pinned on a creative background — in Snehanshu’s words, it’s a marriage between Twitter and Instagram. While platforms like Pratilipi can be compared to international platforms like Wattpad, YourQuote does not have a direct corollary in the international markets. This has proved to be a challenge for the company because, in the absence of an international comparable, it becomes tough for the investors to do market sizing. It was also one of the reasons why YourQuote decided to introduce a premium subscription early on in its growth journey.

The app premium membership has been live since 2019, but initial benefits included in the premium subscription were earlier limited to an ads-free version of the app and a choice of motion wallpapers to go with the posts.

Over time, the premium service brought content engagement statistics for writers, downloadable quotes, and finally micropayments. The microtransactions allow writers to offer monthly subscriptions (INR 20 to INR 100) to their readers or followers and also earn a royalty on paid stories ranging from INR 1 to INR 20. However, writers can only withdraw money from YourQuote Wallet once they have touched INR 1000 mark. The format of the stories could be a typical short story or just quotes created by the author.

“We figured that rather than selling the company’s growth story — where we are constantly being compared with TikTok and ShareChat of the world — we’ll focus on revenue,” said Snehanshu.

YourQuote claims to be profitable since the early months of 2020 and the company said it is making a profit of around INR 60K to INR 1 Lakh per month. With the launch of micropayments, YourQuote claims to have doubled its revenues and is earning INR 10 Lakh to INR 20 Lakh profit, which it plans to reinvest towards hiring and marketing. Going forward, YourQuote is planning to invest in brand awareness, as micropayments for short form content are a fairly new concept.

“We have built a very strong company foundation and it will also change investor’s perspective towards us, now that we have escalated from being a survival-mode company to a high growth large market player,” Snehanshu added. 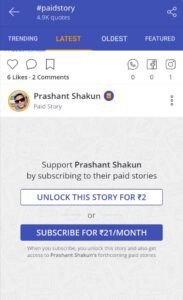 It currently claims 200K daily active users on average with only half of them being active readers, while the others are creators.With nearly 100K users creating content on YourQuote daily, it’s no surprise that the company chose to focus on monetising through creators instead of readers.

Further, the company claims to have 4 Mn installs overall, out of which 2.2 Mn are writers. Overall, 70% of the users on the platform are from Tier 2 and Tier 3 cities like Patna, Indore, Lucknow and 30% are from metros and Tier 1 cities such as Delhi, Mumbai, and Bengaluru. Kolkata is its top performing city in terms of users. The app is accessible in 13 Indian languages, which is also an attraction from a creator perspective.

On each user subscription, YourQuote earns 20% and the writer gets 80%. In addition to the 80% commission, YourQuote also earns through the sale of premium plans which are currently priced at INR 149 per month, INR 749 for an annual plan, and INR 4,999 for lifetime access. The paid stories are, however, only available on Android for now. Till now, YourQuote claims to have 12K subscribers for the premium plan.

The company also offers a book publishing service for the writers, which allows them to self-publish physical books of quotes which are then listed on YourQuote’s digital bookstore. On these books, YourQuote takes a 5% cut for royalty and the writers get 10%, while the rest goes towards publishing and printing charges.

While things are definitely looking up for YourQuote currently, this has not always been the case. The company raised $1Mn funding from IDG Ventures India in 2017 to build YourQuote as a multimedia platform with videos as the focus. But over the next six months, the direction changed.

At the time, the company only had 30K-40K daily active users and thus, was only able to provide a limited number of views to video content creators, which was not enough and thus not lucrative enough for creators. The size of the app increased to 25 MB from 10 MB and this dropped user acquisition by almost 50% to 60%. On a community level, YourQuote users started focusing on viewership numbers instead of the number of likes on their quotes or short stories — similar to how YouTube creators value views count more than the number of likes.

“So we realised that if we put the numbers into the head of the user, then the social connection goes for a toss and it was a disaster for the company. So we rolled back the audio-video content from the app and this meant losing out on our fundraising thesis, we couldn’t raise funds after that. We lost almost a year in building and rolling back the audio-video platform,” said Snehanshu.

However, there was one thing from its early years that has enabled YourQuote’s growth today. In the process of building an audio-video platform, YourQuote ended up organising around 835 open mics and poetry events across 115 cities in India. Most of these events were led by a network of 150 volunteers and thus did not involve any substantial spending from YourQuote.

“People just volunteered and organised it in their cities, and once people started meeting offline, the community became even more strongly knit. There are YourQuote users who met offline and ended up dating and marrying each other. These are more than just testimonials. It shows that we have built a platform that people really enjoy,” Snehanshu told us.

In addition to this, the company also invested in strategic product-level decisions to engage users. For instance, a YourQuote Baba account on the app sends periodic prompts and alerts to users and inspires them to write around trending topics and themes. The app does not have a chat feature either, so the primary interaction point is the content and then engaging in comments, rather than using it for messaging.

This approach means that the user engagement metrics include likes, comments and, of course, the content pieces. YourQuote claims to have 1 Bn likes, 100 Mn posts, and 300 Mn comments on the platform. On average a user spends 28 minutes on the platform and about 200K posts are created on YourQuote daily.

Another interesting product-level decision that drove engagement and content ownership was the YourQuote watermark added on each piece of content created by users, similar to TikTok. This has been the major source of new user acquisitions for the company.

Going forward, the company wants to broaden its base of non-Hindi regional language users. Currently, the company also has about 4% global users coming from countries like the US, Nigeria, Philippines and Pakistan, which it will be looking to grow after strengthening its Indian user base.

“I think the market that we want to cover has the potential of 10 to 15 Mn Indian users and that’s where we will be focusing over the next one and two years. Post which, we would target English speaking nations like the Philippines and US,” said Snehanshu.