The Secret Behind Pratilipi Gaining 20 Mn MAUs In Five Months

The Secret Behind Pratilipi Gaining 20 Mn MAUs In Five Months 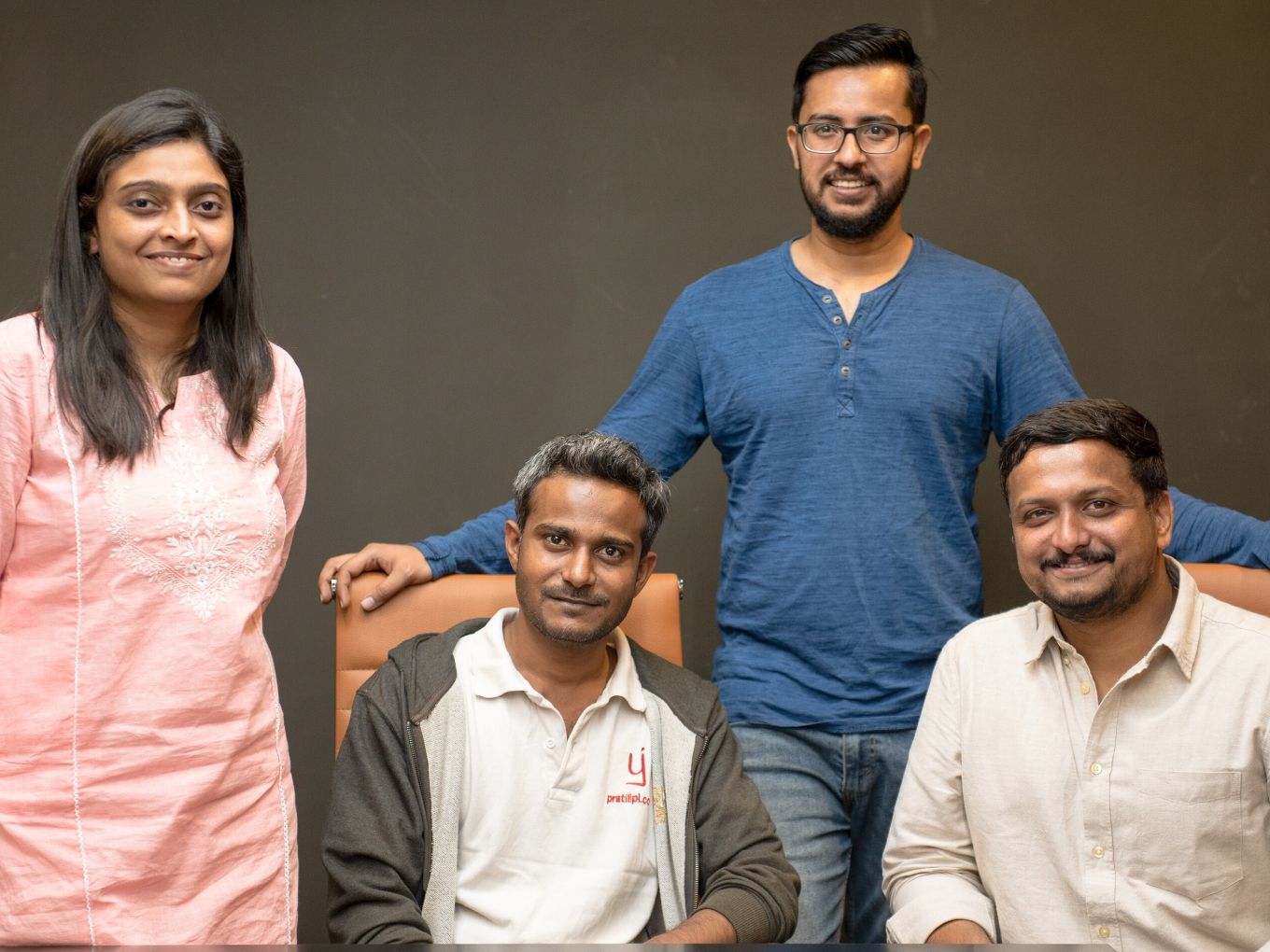 As a self-publishing platform for writers, Pratilipi is uniquely positioned among the horde of regional language apps in India

“It took us about 5 years to get to 10 Mn monthly active users (MAUs) and then about 5 months to get to 20 Mn. Slowly, slowly then all at once,” Pratilipi cofounder and CEO Ranjeet Pratap Singh wrote in June 2020.

The Bengaluru-based self-publishing platform for writers has found itself a niche in the Indian regional language apps segment, with most players focussed on short video. Pratilipi, on the other hand, chooses to focus on original writing and poems.

Like many other user-generated content platforms, for years, Pratilipi had to tackle the classic chicken-egg problem. To acquire a large reader base, it needed to onboard good writers and good writers would only join if the audience was large and relevant.

Now with over 21 Mn monthly active users in June 2020, Pratilipi seems to have cracked the formula. Moreover, it has 9% monthly reader retention and 14% writer retention, which is promising indeed for a self-publishing platform. 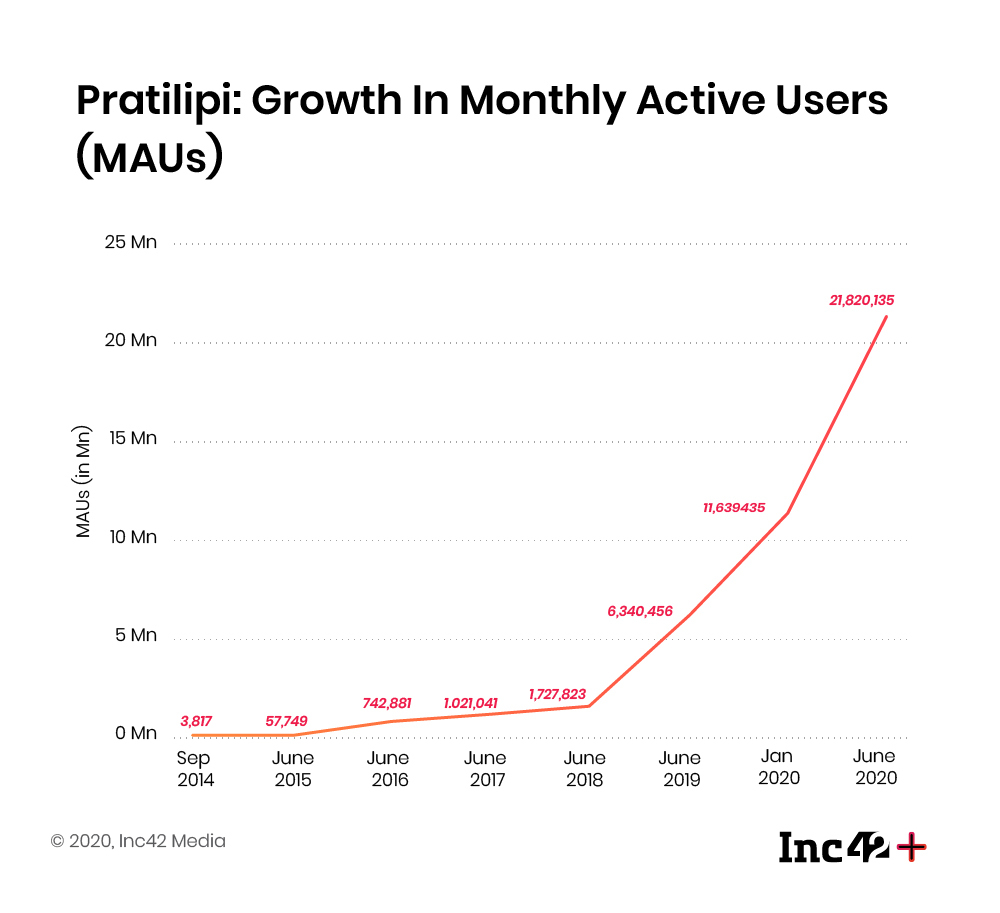 According to Singh, there were a couple of things that helped Pratilipi in achieving such user retention and growth. The biggest contributor being the company’s undivided focus on its core offering, which is a reading and writing platform.

“We were extra focussed that there is nothing else we will do till the time we get enough users. So until about six months back, there’s nothing else that we did,” he said. This kind of focus on the core product offering was contrary to what Pratilipi’s competitor’s companies were doing at that time.

Most of the companies that were trying to build a platform like Pratilipi tried to do fifteen things at the same time. Singh says that if the market is trending towards a short-form content product such as Sharechat, then competing companies will try to build a short content product on top of their existing product. If a company tries to do two or three things at a time, then its core offering does not remain as strong, he emphasised.

The second part of Pratilipi’s game plan was to double down on providing better user experience to its existing readers and writers, both in terms of product and customer service. This helped Pratilipi to maintain a good net promoter score (NPS) and app rating.

“Our employee NPS as well as customer NPS has almost never gone below 80 and 80 is like the best in the world. Our average android app rating was 4.8 in about a few months,” said Singh.

In terms of engagement, writing challenges and competitions have worked well for the company. Unlike platforms like YourQuote, Singh claims Pratilipi has only spent about 1% of their efforts towards offline community building. In June 2020, Pratilipi recorded 1.9 Mn new follows, 5.5 Mn  new ratings, and 2 Mn new reviews on the platform. 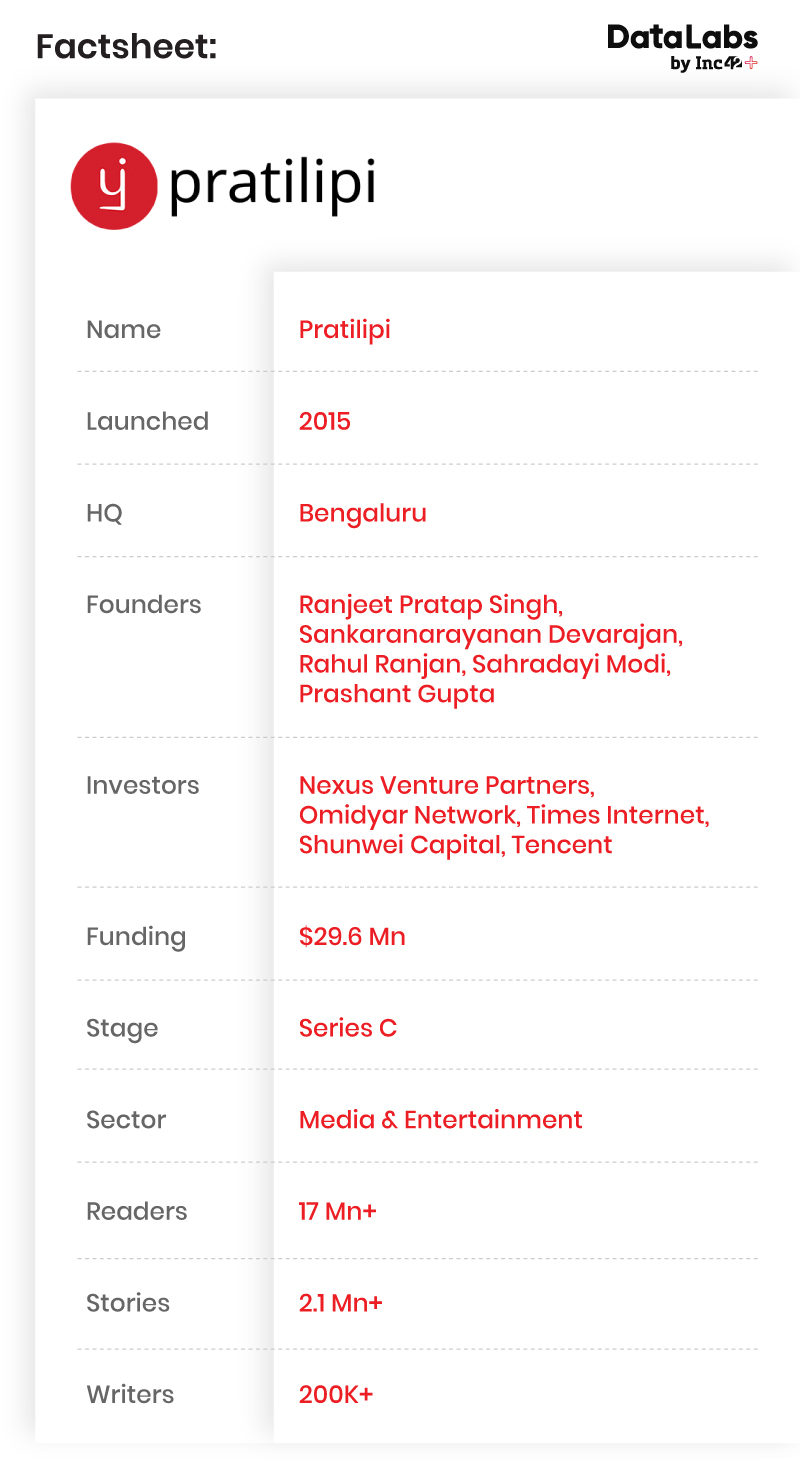 What helped Pratilipi in improving engagement was building a platform that enabled users to interact with each other — not just a community where readers and writers can commingle, but also groups exclusively for writers and readers. Singh noted that interaction between experienced writers and freshers has helped the latter improve their storytelling and craft. And similarly, readers too contribute to the engagement of writers through their constant feedback and reviews.

Another thing that seems to have worked in the favour of Pratilipi is its recommendation engine, which is able to suggest interesting content to the users and also moderate stories, comments which violate the platform’s policy. It should be noted that other than English, the platform is also accessible in 11 Indian languages including Hindi, Gujarati, Tamil, Telugu, Kannada, Odia, Urdu, Malayalam, Marathi, Bengali, and Punjabi. Moderation in vernacular languages has remained a huge challenge for many big tech companies like Facebook and Twitter. However, Singh claims that Pratlipi has been able to develop a 99% automated moderation system for the platform.

Founded by Singh, Sankaranarayanan Devarajan, Rahul Ranjan, Sahradayi Modi, and Prashant Gupta in 2015,  Pratilipi has raised about $29.6 Mn in total funding from a clutch of investors including Nexus Venture Partners, Omidyar Network, Times Internet, Shunwei Capital, Tencent, and Times Internet among others. According to MCA filings, Pratilipi reported $133K revenue in financial year 2018-19, as compared to $28K in the previous year. 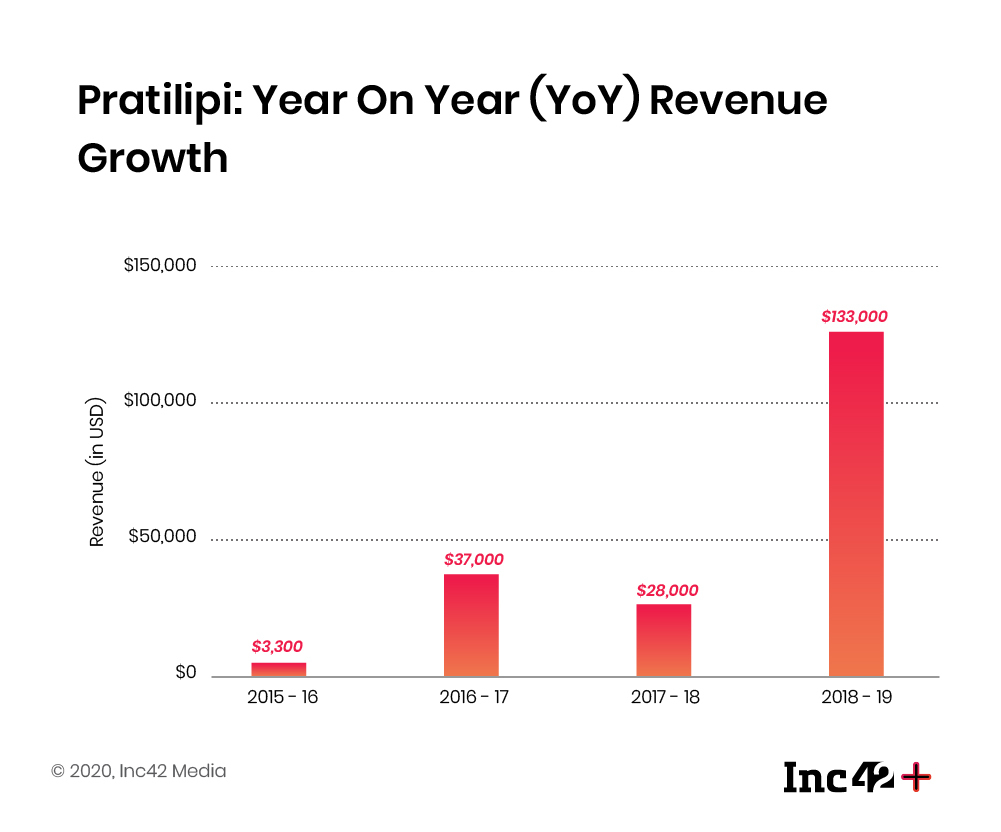 After crossing the 10 Mn MAUs mark in January 2020, Pratilipi has started diversifying its offerings to include audio (Prailipi FM) and visual storytelling (Pratilipi Comics). However, the company does not plan to foray into video storytelling anytime soon, given the huge competition in the space especially YouTube and the wave of new short video apps.

While everything seems to be falling in place for Pratilipi in terms of customer retention and growth, the platform still does not have a solid monetisation model. Singh said that Pratilipi will be introducing monthly (INR 50- INR 100) and per story (INR 5 – INR 10) subscription plans in the next three to four years. However, the platform will ensure that 90% of the stories remain free and only high quality content goes behind the paywall.

Further 10 years down the line, Singh envisions Pratilipi becoming a hub for best writers, whose IPs can be bought by Pratilipi and sold to movie producers and merchandise manufacturers. This will allow both writer and platform to earn much higher profits through royalties, he added.

Earlier this week, Indian army reportedly asked its personnel to delete 89 mobile applications ranging from social media, ecommerce, utilities, dating apps. The list, interestingly, included Pratilipi. To which, Singh noted that they have not yet received any official information from the army, and since it is anonymous source based news it could be fake.

The company also noted in a tweet that Indian army seems to be restricting all the highly used apps like Facebook, Instagram, etc, which provides chatting facilities. “So at Pratilipi our understanding is the said restrictions are mainly for prevention of sharing connections.”