Will P2P Platform CarryMates Be The Airbnb Of The Courier And Logistics Industry?

Every startup entrepreneur has a eureka moment — the moment in which they are driven by the deep desire to do something and also realise the ‘something’ that they want to do. CarryMates cofounder Youmit Singh also had his eureka moment that set off the desire to build a community of human couriers delivering each other’s goods wherever they travel, connected by a circle of trust.

It all started when Youmit had to ship some documents to his parents in his hometown and the courier company asked for an exorbitant price without any guarantee against theft of or damage to the consignment. Unwilling to spend so much, he instead handed it over to his friend’s friend, who was visiting his hometown, and requested him to hand the package over to his parents.

“The documents were delivered safely and, in return, as a goodwill gesture, I gave the person who delivered it some gift vouchers,” says Youmit.

The incident got him thinking about the problem of logistics, the high prices charged by courier companies, and a possible solution. He realised there must be millions of individuals travelling across the globe with some space to spare in their suitcases who could be connected on a common platform and deliver each other’s consignments, against some quid pro quo, of course.

And thus the idea of CarryMates was born. Youmit founded it in 2017 along with Pushpendra Sijariya, Navneet Kumar, and Hitesh Kumar. Carrymates is a peer-to-peer platform (P2P) in the courier and logistics space that is based on the concept of leveraging the unutilized carrying capacity of travellers across the world to help deliver consignments.

“We are using cloud-based technology to connect travellers and its customers via their  mobile devices for the deliveries. We will also using GPS technology for live tracking of deliveries. To start with, we’re building our application for Android and later on will add Web, IOS, and Windows versions,” says Youmit, elaborating on the CarryMates tech platform.

How did the four co-founders of Carrymates come together and come to believe in Youmit’s idea? Youmit and Navneet, who were colleagues, were once visiting Pushpendra at his place. Coincidentally, Pushpendra too had to send some packages to his sister-in-law in Mumbai and he asked the duo, who were to visit Mumbai, to deliver the package.

“Thus, the idea and the market need was validated. When we told Pushpendra that we were thinking of a solution to service this market need, he was very excited and wanted to join our team. Hitesh joined us as an intern and showed great passion and commitment to this idea, so we asked him to become a co-founder,” explains Youmit. This was in June 2017.

The Mumbai-headquartered startup is well on its way to connect travellers with people who need items delivered to various cities and, eventually, to different countries as they expand. It’s a cloud-enabled platform that promises to make P2P deliveries effective and also aims to expand into the B2B and B2C deliveries space.

What CarryMates is doing is creating a social community platform, much like Airbnb, where people who travel will be connected to an app and keep each other updated on their travel plans. The sender can pay the carrier an amount commensurate to the effort made and the distance travelled by the package.

Youmit explains, “We have built special location-based algorithm to connect travelers and senders. We have integrated our service with existing payment wallet service providers and payment gateways, but initially, our application will offer only cash on delivery (COD) mode.”

The basic premise of the business idea is that connecting this community of travellers will create ample opportunities for people to earn and save money as carriers and senders. Building trust, of course, will be an important prerequisite in executing the idea successfully.

The CarryMates platform is still in its beta version and is being tested within a closed group. The team is testing the service on about 100 people from major metros selected on the basis of initial transactions on the platform. They are taking their feedback on the service. After successful testing, the founders plan to start the initial marketing amidst the first and second connections of the same group members on Linkedin. After that, the app will be available in the public domain.

Technology model of the startup: 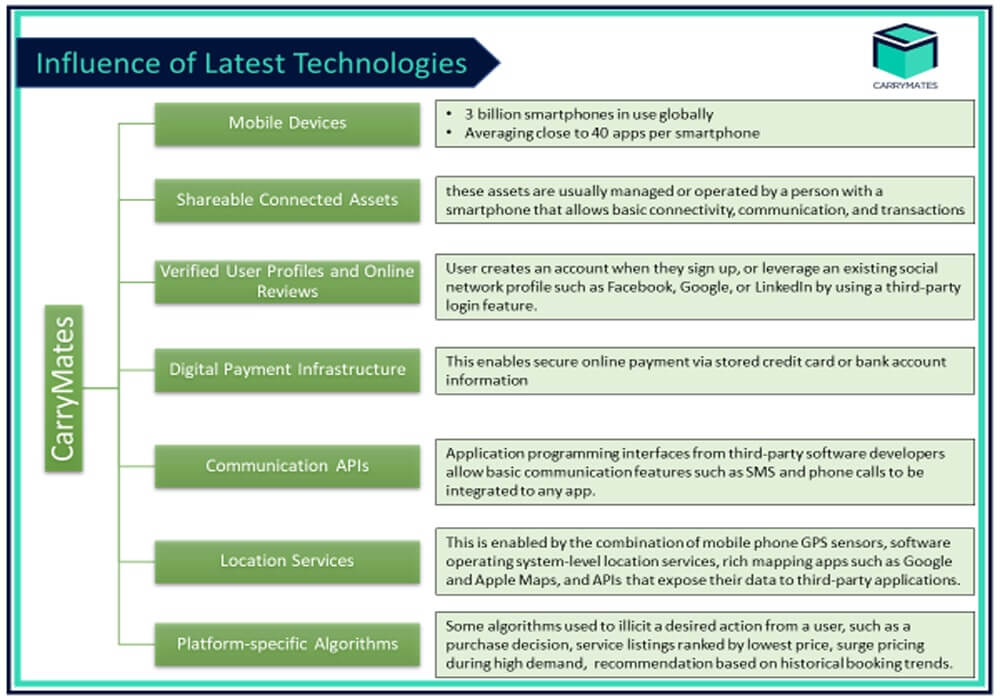 But despite its novel business idea, CarryMates is facing an acute challenge since it is in the P2P segment — the lack of a technology platform to organise the information related to travellers and their travel schedules and to analyse their underutilised carrying capacity.

Youmit says, “This leads to people depending on traditional courier or postal services for parcel delivery even though these services are expensive and inconvenient due to dedicated resources (employees/logistics) used for delivery.”

The Blue Ocean Strategy: Tapping An Ocean Of CEP Possibilities

The postal and courier industry is one of the oldest industries in India. At present, there are many national and international companies in the space. The market size of the Courier, Express, and Parcel (CEP) is expected to reach $3,050 Mn by 2021.

Although the startup is working on a P2P model, which is new in the Indian CEP market, it will face stiff competition from established service delivery companies such as FedEx, DHL Express, Gati, ISP, TNT India Pvt Ltd, etc. However, one breather for CarryMates is that these companies are primarily working in the B2C segment.

Youmit says there are no startups or companies in the P2P space in India yet. “There are some players in other countries like Roadie (US) and Nimber (UK) working on this idea, but when it comes to detailed functionality and the Indian market, we find ourselves working towards the blue ocean strategy,” says Youmit.

But won’t getting validation from customers in India prove to be an uphill task? The team is optimistic that high quality of deliveries and competitive pricing will help it gain an edge over its competitors.

The founders say that CarryMates’ prices will be more competitive than other courier services given the fact that it is “not building any capacity or facility for delivering couriers” and will not require dedicated manpower.

Here’s a price comparison chart below:

To the founders, the prospects of the product appear to be immense, especially since an increasing number of Indians are travelling within and outside the country. India will be one of the largest outbound travel markets in the world in the next few years. It is estimated that 25 Mn Indians travelled overseas in 2017 and this is growing at a healthy double-digit rate. The Yatra Winter Travel Survey 2017 showed that 36% Indian travellers were planning an international holiday with 1,613 Mn being the number for Indians travelling in the domestic space.

CarryMates: The Airbnb Of Courier Services?

The world has, in recent times, seen some great initiatives built around the concept of the “sharing economy” — think Uber, AirBnB, WeWork. Unlike Baby Boomers and Gen X-ers, Millennials don’t seem to care for owning stuff. They’re happy having access to good and services — from cabs and homes to clothes, books and even workplaces — and this has been made possible by the advent of the digital and sharing economies.

There couldn’t have been a more opportune time to come up with such a shared delivery service. According to a report by Accenture, the courier, express, and parcel (CEP) industry is growing at the rate of 25% and is estimated to be in the tune of $585 Mn (INR 4000 Cr). The report’s take on the sharing economy was interesting: “Sharing economy set to disrupt the last mile further.” To this end, the sharing economy has received a further boost from factors such as transportation cost-cutting, convenience, and an upsurge of funding in the sector by venture capitalists.

Businesses are continuously moving from heavy asset models to light asset models and tapping into emerging technologies to create innovative solutions. “This is a new world order in which services are increasingly going from a collective mode to being personalised or customised, thanks to the shared economy,” says Youmit.

On top of this, he says, “India is also embracing global technologies like AI, IOT, sharing economy, etc, and the acceptance and reach of these technologies are going to grow significantly in the CEP industry in future.”

According to him, although there is a multi-billion courier and logistics market in India which is operating on the conventional high-asset model, it is bound to shift to the asset-light sharing economy model over time.

How Will CarryMates Deliver Trust?

Trust is the major factor that drives any organisation and when it comes to a community-driven service like this, it’s all the more essential.

In the last millennium, brands were built on institutional trust. Companies created products or services used advertising and marketing to influence consumer perceptions and employed appropriate distribution channels to reach them.

Startups like CarryMates, which run on collaborative consumption services like Uber and Airbnb, pose significant risks to the traditional couriers and logistics industry and to insurers. Therefore, the bigger companies are beefing up their marketing ideas and product policies to ensure that trust is not breached.

But now, with the growth of social media, P2P networking, and sharing economy platforms like Uber and Airbnb, consumers have gradually overcome their fear of interacting directly with peers and exchanging goods and services with strangers. In fact, people are more willing than ever to conduct transactions based on peer-to-peer trust.

Still, there has to be a lot of effort that goes into trust building in a service like CarryMates. So, the startup has “trust profiles” for its customers based on a parameter called PTF (Profile Trust Factor), which is calculated on the basis of the weighted averages of the factors below:

The PTF percentage improves upon further verification and positive feedback.

The founders have also put in place a Travellers Safety Assurance and Senders Safety Assurance policy to win over trust by ensuring the security of the objects that are delivered by CarryMates carriers. So, in case there is a loss of any property involved, it will be verified if the case is genuine or not, and then a third-party insurance company will provide the cover.

But if you still think such community-driven services are still marred with risks, here is a quote from Airbnb to deliver the skeptics from their insecurities.

On any given night, 2 Mn people stay in homes on Airbnb in 65,000 cities all over the world. There are more than 4 Mn listings in 191 countries to choose from — that’s more than the top five hotel chains combined. What makes all of that possible? Trust.

If CarryMates can garner the kind of trust that sharing economy platforms like Airbnb and Uber evoke, and scale to accompany it, it could well become their equivalent in the courier industry.

[CarryMates was among the four startups that pitched during Kanpur edition of BIGShift – a localised startup meetup series by Inc42 and Amazon India, click here to read our coverage on BIGShift.]