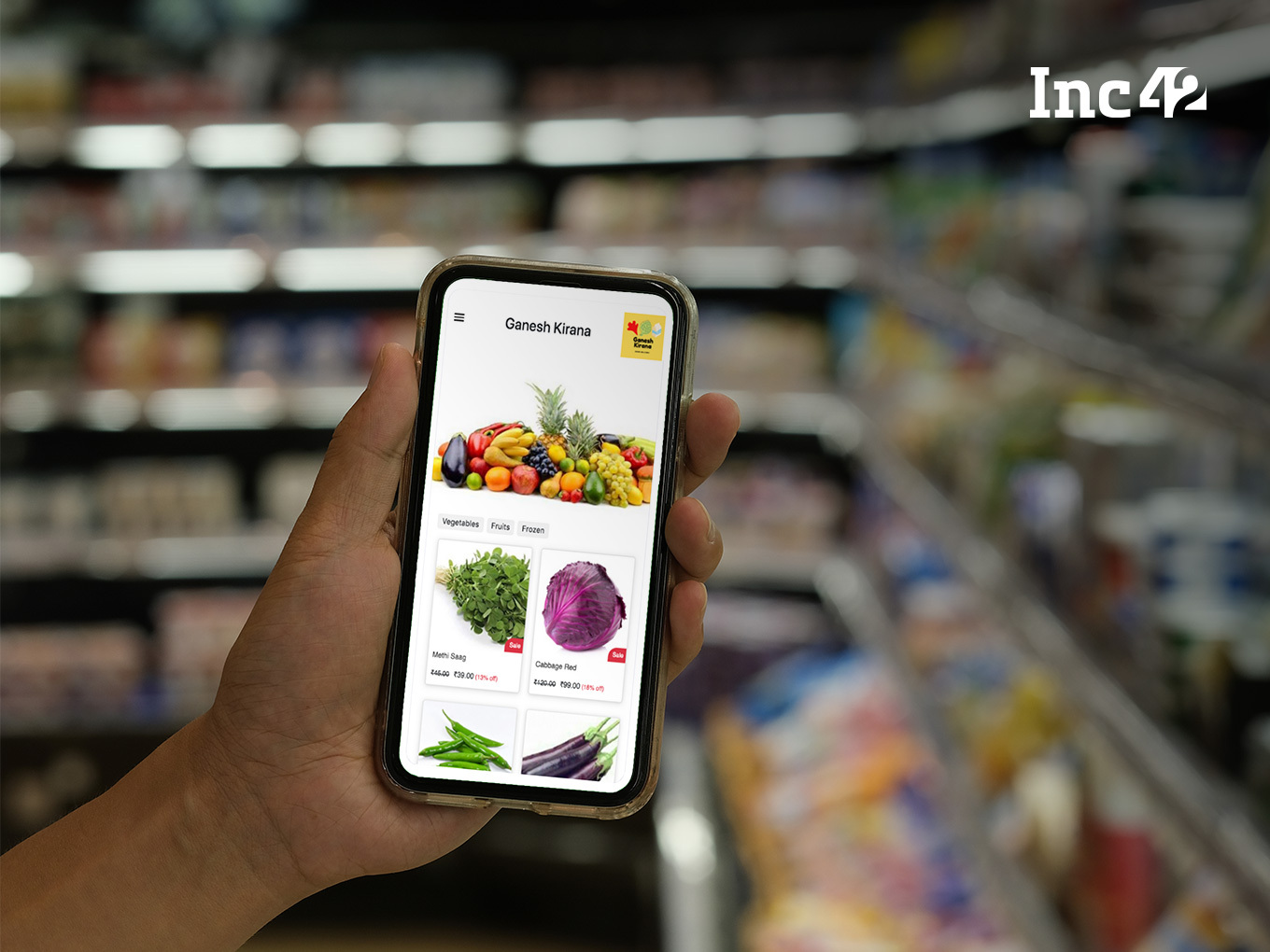 Not only have established players like Amazon, Flipkart, Swiggy, Zomato have thrown their hat in the small retail tech ring, newer kids in the block have emerged like MyStore, Dukaan.io, DigitalDukaan, OKShop

The online grocery opportunity in the country was pegged at $500 Bn by a 2019 report of management consulting company Redseer. Of this half a trillion dollar opportunity of transporting 13 Mn mom and pop shops to the digital age, only 0.2% had come online at the time

The Indian startup ecosystem has always grown in spurts around the key needs of the market.  There was the ecommerce wave when startups raced to be India’s Amazon. Then there was a food delivery wave; a payments wave; a lending tech wave. And now it’s time for dukaan tech.

Every couple of years in the last decade has seen a new sector attracting the attention of techies and VC money has followed the discovery of the next ‘good market’ — a term used by the money men for describing markets where returns are sure to follow regardless of how effective the product is.

With Reliance entering the ecommerce fray and betting big on bringing kirana stores to the online space, digitising grocery delivery has become the next stop of entrepreneurs looking for a problem to solve.  The online grocery opportunity in the country was pegged at $500 Bn by a 2019 report of management consulting company Redseer. Of this half a trillion dollar opportunity of transporting 13 Mn mom and pop shops to the digital age, only 0.2% had come online at the time.

Not only have established players like Amazon, Flipkart, Swiggy, Zomato have thrown their hat in the ring, new kids on the block have emerged like MyStore, Dukaan.io, DigitalDukaan, OKShop, Bikayi — in a segment where retail tech players such as Peel Works, Nukkad Shops, Snapbizz and others have jostled for space for a while. A cursory search of the word ‘dukaan’ on the Google Play Store throws up at least 50 results of apps that bear names with some variation of dukaan or kirana.

On the other end of the digitisation spectrum, we have a few retail tech startups that have been around since the hyperlocal wave, targeting the most sophisticated set among retailers and store owners. These are offering more matured services such as procurement, price-guards, two-side marketplace support, automatic inventory mapping and more. 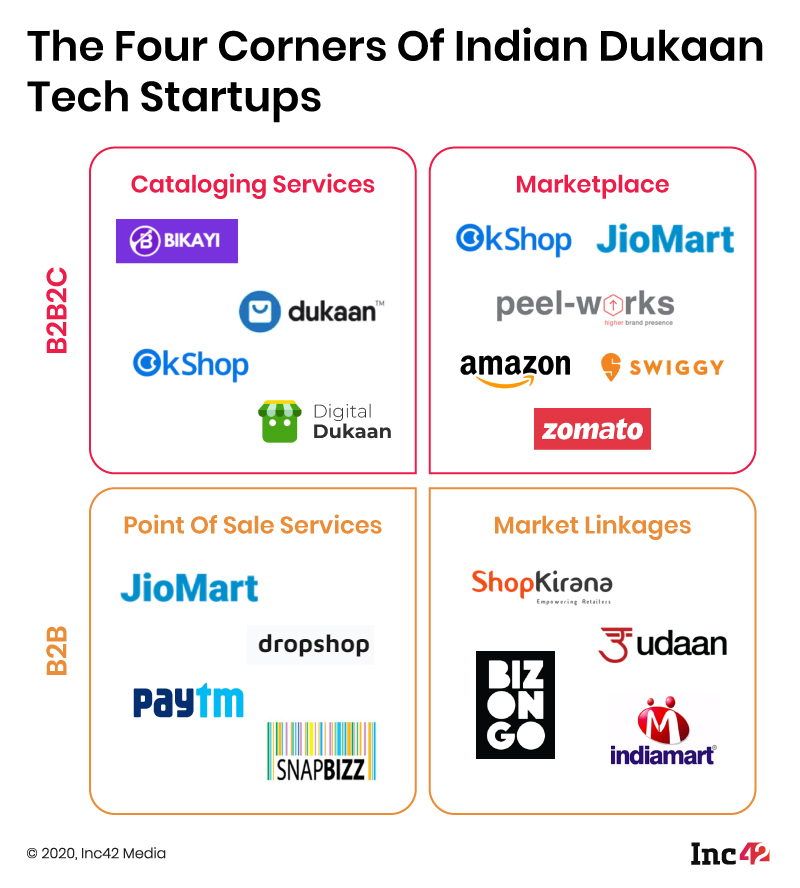 SaaS In The Hands Of India’s Kiranas

Striding these two worlds is Bikayi, a Hyderabad-based fintech startup founded in January 2019 that featured among Y Combinator’s Summer 2020 batch. Founded by IIIT Hyderabad batchmates Sonakshi Nathani and Ashutosh Singla, the core idea of the platform was to try to create a set of sophisticated users such that SaaS becomes second nature to them in the future.

In a way, Bikayi is not only looking to bridge the adoption gap but also looking to sell value-added services over and above what other new “dukaan-tech” apps are doing, but to the same audience.

“While many players are trying to build a Shopify for small merchants, we felt that those feature-heavy applications weren’t mobile friendly enough for them to adopt”, said Nathani.

Bikayi’s minimum viable product launched in March last year enabled neighbourhood shops to make the online transition with a catalogue that could be shared on WhatsApp. As the response to the app grew and the startup started receiving feedback from shopkeepers, it started adding more features such as integrated login for storefront staff, order tracking through SMS, customer reviews, live analytics of number of orders and visitors daily and monthly, and inventory management, among others. 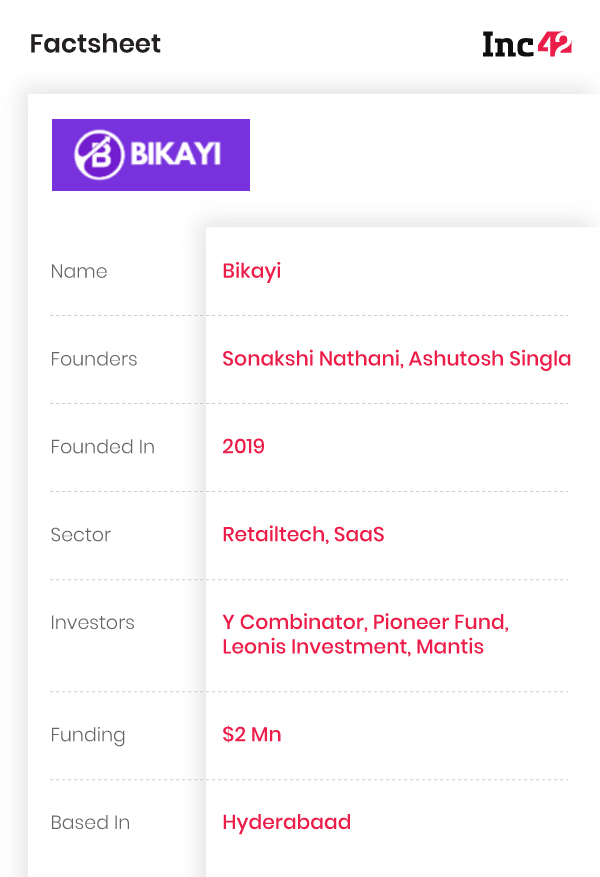 While the startup wanted to make the UI/UX simple enough for this unsophisticated audience, that doesn’t mean it was ready to sacrifice on the feature front.  “Once a store starts ecommerce, its aspirations rise and we don’t want to be a tool that they skip at some point. Initially, everyone started as a cataloguing platform but now everybody is trying out different models. Today we are a SaaS-based subscription model that solves cataloguing and order management and that would be the major difference between us and others,” Nathani said.

This belief in the aspirations of small businesses has led Bikayi to adopt a subscription-based SaaS model with multiple pricing points catering to different kinds of businesses. While there’s a basic plan that customers can use for free, there are also monthly plans ranging from INR 167 to INR 667 which users can choose depending on their catalogue volume and feature requirements. While these are early days in terms of revenue, most apps targeting kiranas may not have a clear idea of the revenue streams and going beyond what WhatsApp does for them.

The SaaS play is a part of Bikayi’s strategy to focus more on attracting small businesses that are already using WhatsApp or other small retail tech solutions, than trying to cater to first-time users. To drive adoption among SMEs and give them a taste of the larger ecommerce pie, the startup has also started features such as providing referral codes and social media integration of catalogues and offers. 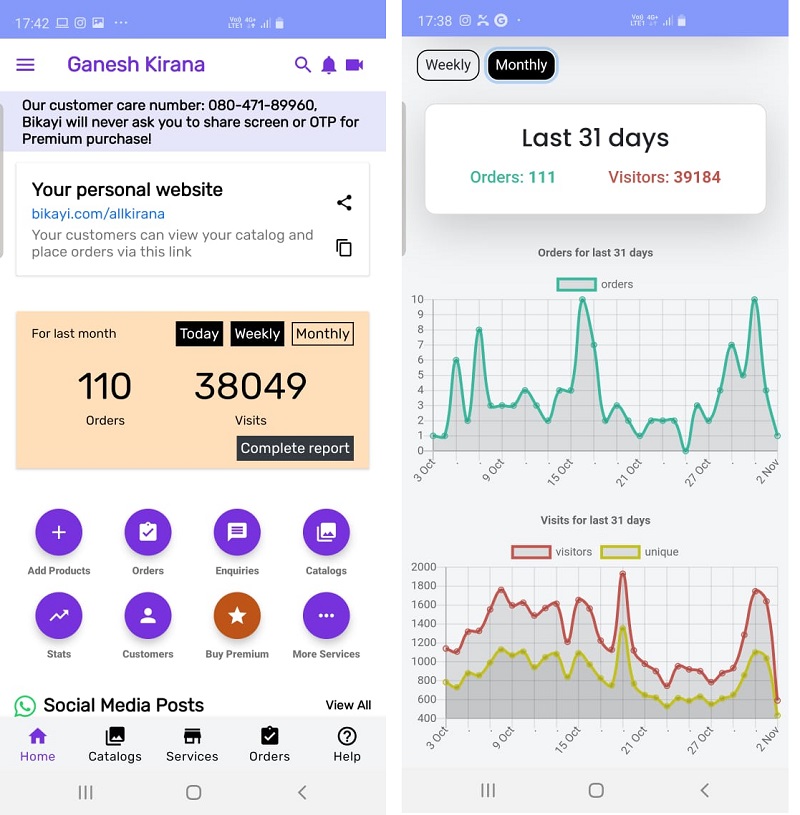 Can Bikayi Be A Gamechanger In A Crowded Space?

Its biggest differentiator however is offering a delivery integration with companies like Delhivery and Shadowfax in geographies they are present in. In places without logistics providers, businesses can charge distance-based delivery fees and use the local network.

With WhatsApp planning to go big in retail tech and JioMart having already onboarded lakhs to small shops, these integrations would help Bikayi find a footing in a market with cash-rich conglomerates. According to Nathani, while WhatsApp Payments will ease the payments integration for small shopkeepers, the use cases are too vast to provide business size-specific solutions and provide customer support.

However, it’s not only tech behemoths that are closing in on this territory — competitors in the dukaan tech space are picking up VC funding at a fast clip amid the pandemic. In comparison to the $2 Mn seed round for Bikayi that Mantis Ventures, Y Combinator, Pioneer Fund and angel investors participated in, Dukaan has raised a $6 Mn round, OkShop is backed by OkCredit that has $84 Mn in its funding kitty,  MyStore is backed by Khatabook that has raised $111.5 Mn as yet.

“Money won’t count in this case as this space is not distribution-first or marketing-led. This product has really good depth in terms of tech and whoever has the best tech will win the market,” Nathani said.