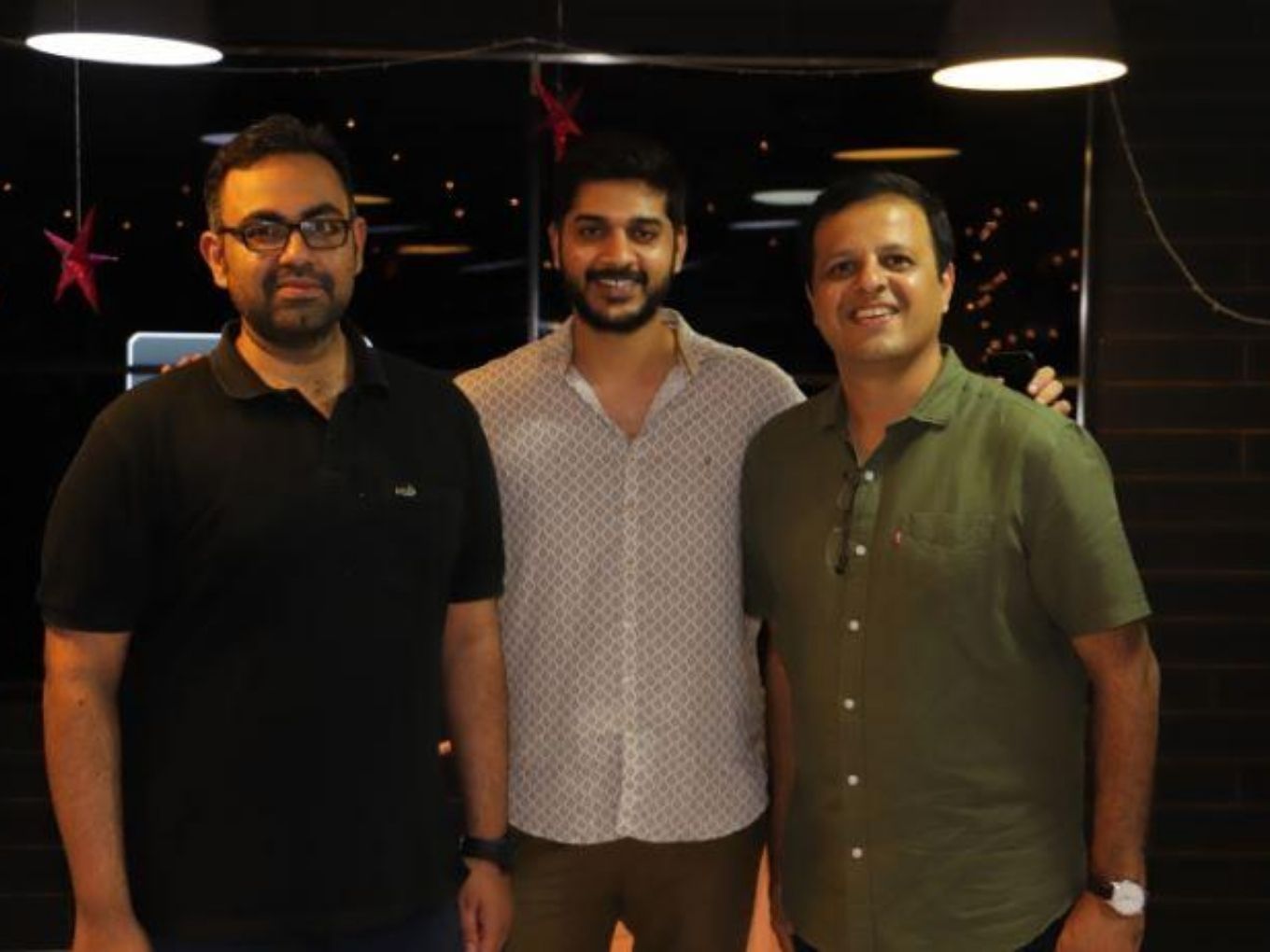 The company follows an income sharing agreement model, where the students can pay for the course after they get a job

Till date, Masai School has trained 100+ students across four batches

“Even the best universities in India have not changed their teaching curriculum in the last 10 years. Whereas, the technologies on which most companies operate have continuously changed. This has left university courses out of sync from what is expected by the tech industry,” — Prateek Shukla, CEO Masai School.

It’s the founding principle behind Masai School. The lucrative salary packages and high growth curves in software development have inspired many Indians to pursue computer science education. But this has not made India a skilled nation. Most engineering colleges have failed at making graduates job-ready, giving rise to many alternative education companies in this space.

The alternative platform being built by Unitus Ventures-backed Masai School offers six to seven-month-long courses in full stack web development, Android development and software development to anyone who has passed class 12. Like many other tech skilling platforms, Masai School operates on an income sharing agreement (ISA) model, which means students do not have to pay any upfront fee for these courses.

Under the ISA agreement, students have to pay 15% of their salary when they start earning INR 5 Lakh per annum (in case of the ‘r-program’) and INR 8 Lakh per annum (for ‘i-program’ graduates). According to Shukla, the payable amount per month is decided on the basis of the first offer letter that the student gets and continues to be the same even if the candidates get a pay hike later on. Further, the ISA installments will continue for a three year period or until the student has paid an amount of INR 2.5 Lakhs for r-program, whichever is earlier. For i-program, the ISA is capped at INR 3 Lakhs.

In other cases, where students do not get salary packages that meet this threshold, the agreement does not kick in. The agreement is said to be only applicable when the student is working in a technology role and is earning the threshold salary or higher. In some cases, graduates are placed as apprentices initially and later converted into full-time employees. Here, the ISA agreement is only valid when they gain full-time employment with packages above the threshold.

Oher edtech startups Scaler Academy and Pesto Tech also offer ISA options to learners, but while Pesto Tech is only targeting students with some work experience, Masai School and Scaler Academy have courses for students that are starting from scratch or are completely new to coding.

Further, Masai School is primarily targeting students that are unemployed, those who come from Tier 2 and 3 engineering colleges and don’t have a career path. “These could be people who were engineers but don’t have the skillset so ended up becoming delivery executives, or cab drivers,” said Shukla. 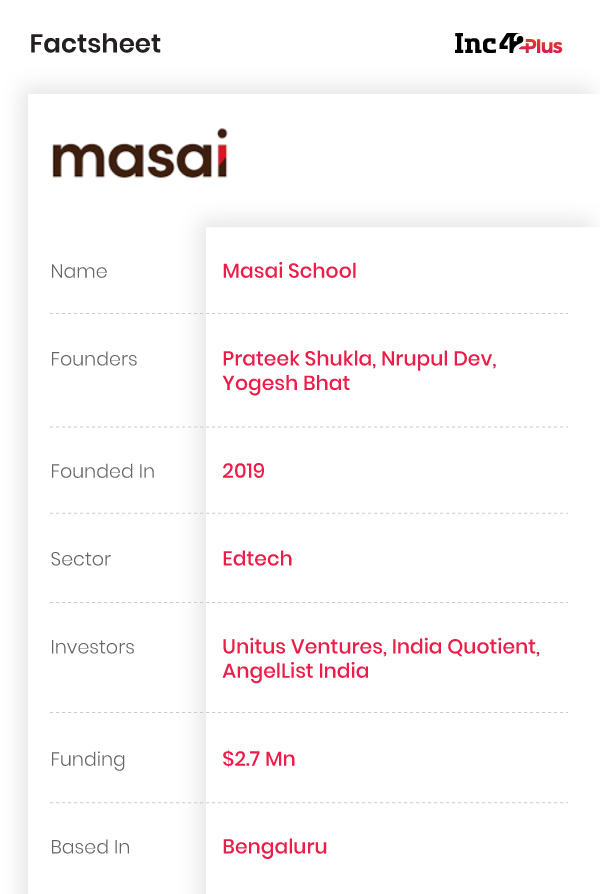 Till date, Masai School has trained over 100 students across four batches, of which more than half come from non-computer science background and outside metros. Further, around 65% of these students are said to be from the economically-weaker section of society.

Another differentiating factor for Masai School is its teaching pedagogy. It follows a mastery-based progression, where the curriculum is divided into seven modules and on completion of each module, there is an evaluation. Only if the student demonstrates enough skills to show that they have mastered the module are they allowed to progress to the next module. Or, it’s back to the start and relearning the concepts.

“Mastery-based progression technique recognises that every student has their own career path and removes the pressure on students to learn at the pace of the curriculum,” said Shukla.

The company has also built an extensive support system for students to depend on and learn throughout the course. Typically there are 60-70 students in a batch and one instructor who takes classes and is paid per session. Then there is an internal TA (teaching assistant) assigned to 20 students, one sherpa for every five students and students work in pairs on a daily basis. 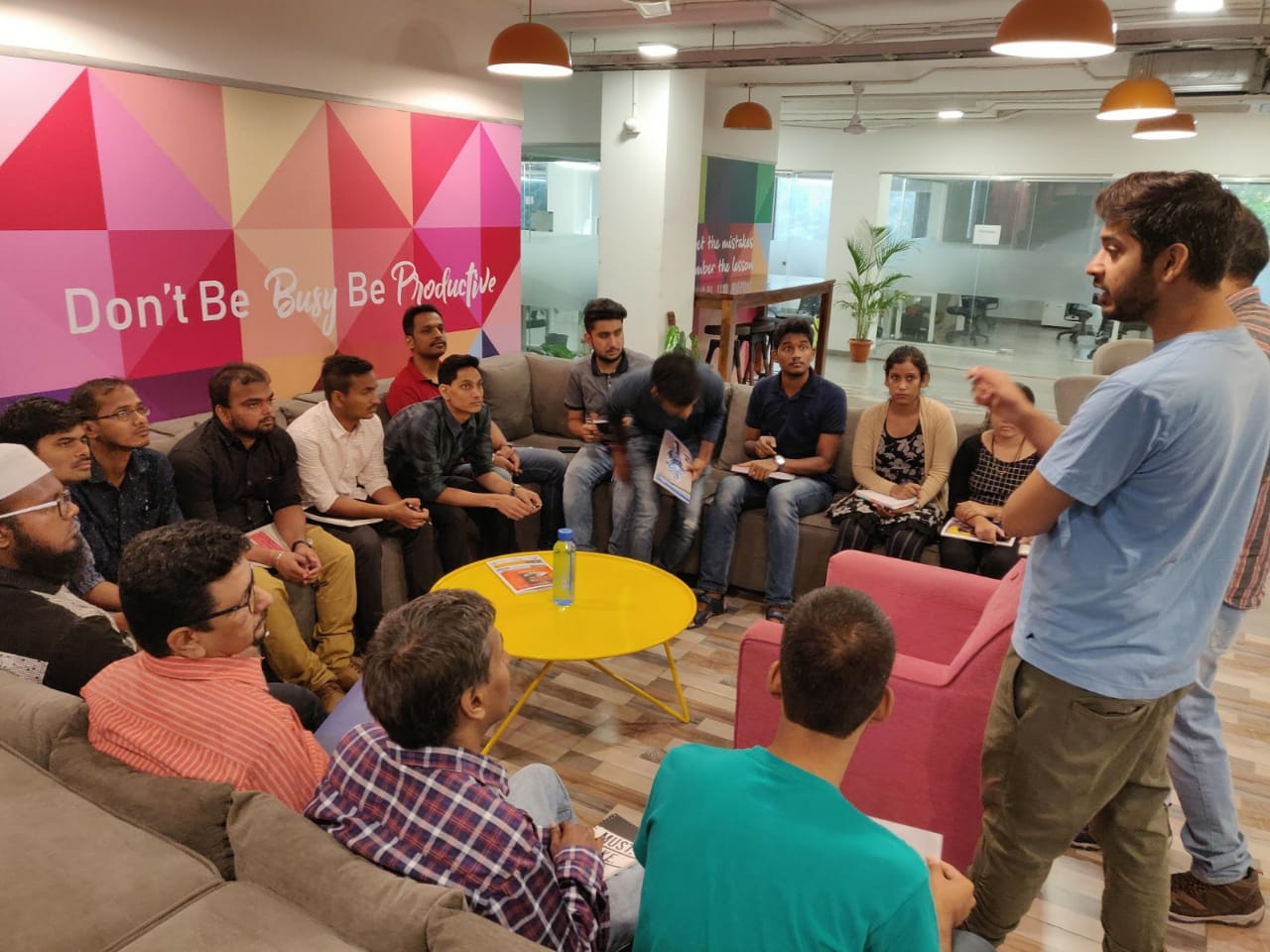 Internal TAs are Masai School employees working on a payroll and are the core guides for each and every group. Sherpas are students from an earlier batch who are perhaps two months ahead of the current batch. Toppers from the earlier batches are usually turned into sherpas and given a stipend. Further, when a student completes 20 weeks of the course, they are assigned external coaches that are typically software developers from companies like Amazon, Google etc.

The external coaches are paid on a per-session basis and give students one-on-one mentoring, guide them on mock interviews, and also resolve their queries around concepts. These sessions with an external coach are conducted once a week. In addition to these layers of mentoring and guidance, learners also external TAs to help with concepts that are tougher for beginners — there’s one external TA for every eight students.

“So in that way, there is a huge support system which has been created, that’s why it is an expensive learning technique. Which is why most colleges and even schools do not follow this technique,” said Shukla.

It is definitely a lucrative proposition for anyone to learn job-ready skills in a matter of six months and be employed at a competitive salary with some of the renowned tech companies. But can anyone enroll into Masai School?

A new batch is started every two months, and around 600-700 students used to apply to Masai School before the pandemic. This has now touched 1200 applications per month. Yet the total number of graduates across its four graduating batches is capped at about 100 students.

The simple answer to the low number of graduates is that not everyone gets into Masai School. Just like premium engineering colleges, Masai School has a selection rate of 2%-3%. The company organises a test for applicants followed by an interview to gauge their motivation to learn and earn.

Recently, the company has introduced entrance tests where students are given a pre-course to prepare for the test. The idea is to level the playing field for those who don’t have the exposure of quality education in life. Students can take their own time to complete this course, but the course is designed to be finished in about 8-9 days.

“With this pre-course option, we see a lot of people putting in much more effort towards learning in pre-course and we feel that the selection rate is going to be improved,” Shukla said. The company also plans to increase the number of offline centres, adding more team members and courses.

Further, even if students are able to get through the stringent selection criteria, enduring the intensive curriculum is a challenge in itself. The ‘r-program’ at Masai School requires students to attend 12-hour classes, six days a week. This is also the reason why the company has a high 20% dropout rate.

“We have a simple policy to tackle dropouts, in the first four weeks, it’s free for anyone to basically try the course. First few weeks, students get a flavour of 9-9-6 completely and then they can decide whether this kind of learning environment is not for them, or that programming is not for them,” said Shukla. He added that the company has a huge churn in the initial four weeks but after that, there are no dropouts through the course journey.

Masai School has three offline centres (one in Patna and two in Bengaluru) purely to help students from economically-weaker backgrounds with infrastructure support. But, after the Covid outbreak these students lost access to the campus and had to move back to their native homes.

“There were some challenges because students moved back to their villages, or to small cities. We have provided them with a laptop and we also have a contingency fund through which they can request money to buy power adapters or charger replacements.” But from the curriculum side, the company claims to have not seen any change because from day one everything used to happen online.

From the student perspective, the challenges include power cuts and lack of space to do the lessons. Before Covid, up to 70% of the students opted for the campus facility, which indicates the impact going completely online might have had. Having gone 100% online since April, Masai plans to go back to the offline centres because they are clearly needed by students who don’t have the required infrastructural support at home.

“There are so many stories of our students being absorbed in top tech companies based on their undeniable skill sets. I think these students will go on to become changemakers, eventually driving the realisation that skills are more important than degrees,” said Shukla.