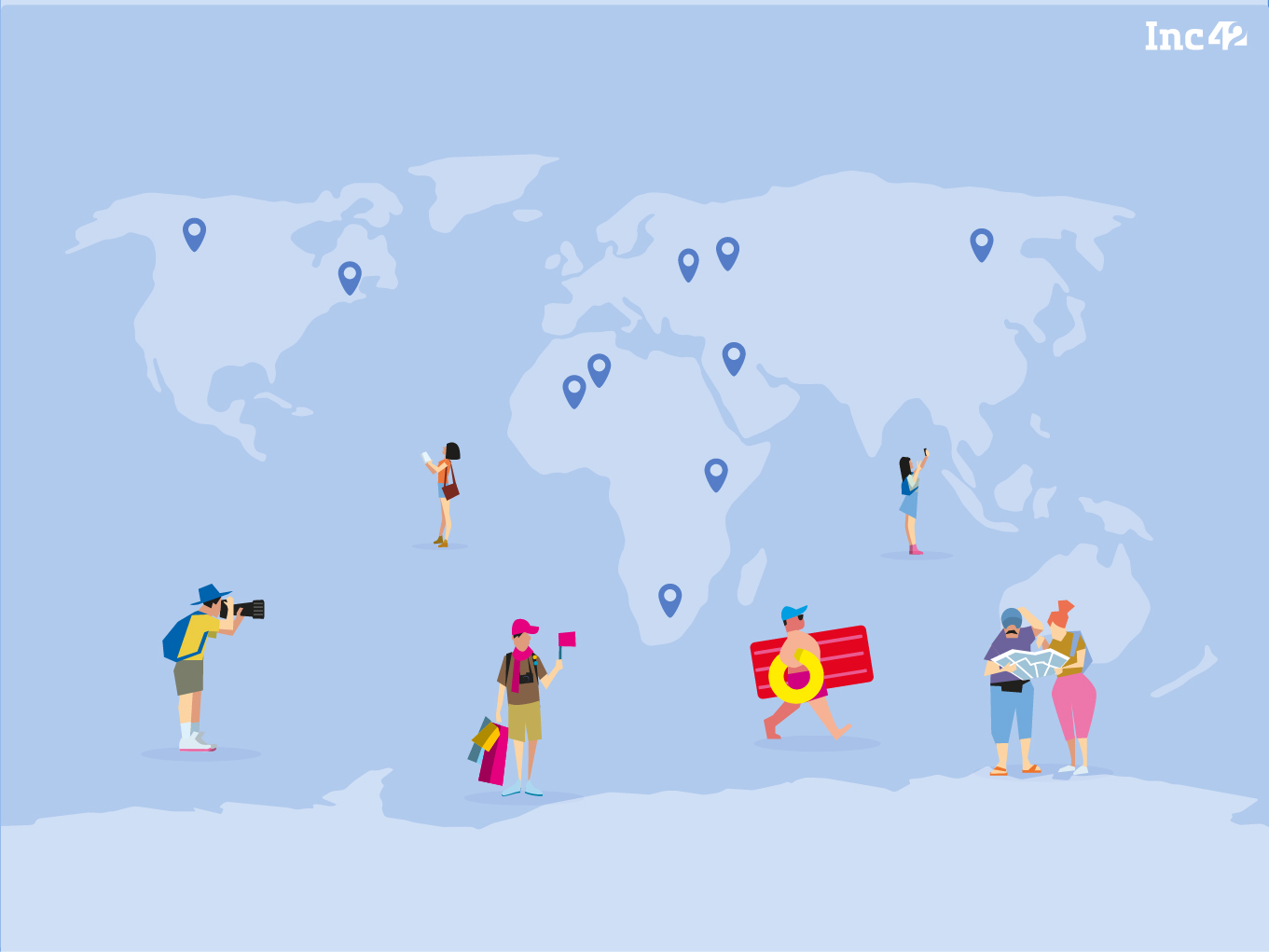 On TraveLibro, one can capture and post-travel memories on a shared timeline

The most prized possession for a lot of us growing up has been that decorated little journal where we noted down our fondest memories, our deepest secrets, and all those momentous occasions in life — the last day at school, the first trip to the beach, the first pet, and others.

Slowly, before we even realised, the diary was replaced by different kinds of social media platforms. Facebook, Instagram, Snapchat all have given us different ways of showcasing our vacations, but a social platform only for travel is still niche. This is where Mumbai-based startup, TraveLibro, the travel social network for influential bloggers and power travellers, is looking to fill the gap.

Instead of elbowing its way into the already overcrowded travel bookings space, TraveLibro founders Monish Shah and Malhar Gala decided to come up with a unique digital storytelling platform with a focus on just travel — which is what gives TraveLibro the sweet spot that it is relishing among travellers, influencers, and the ilk. 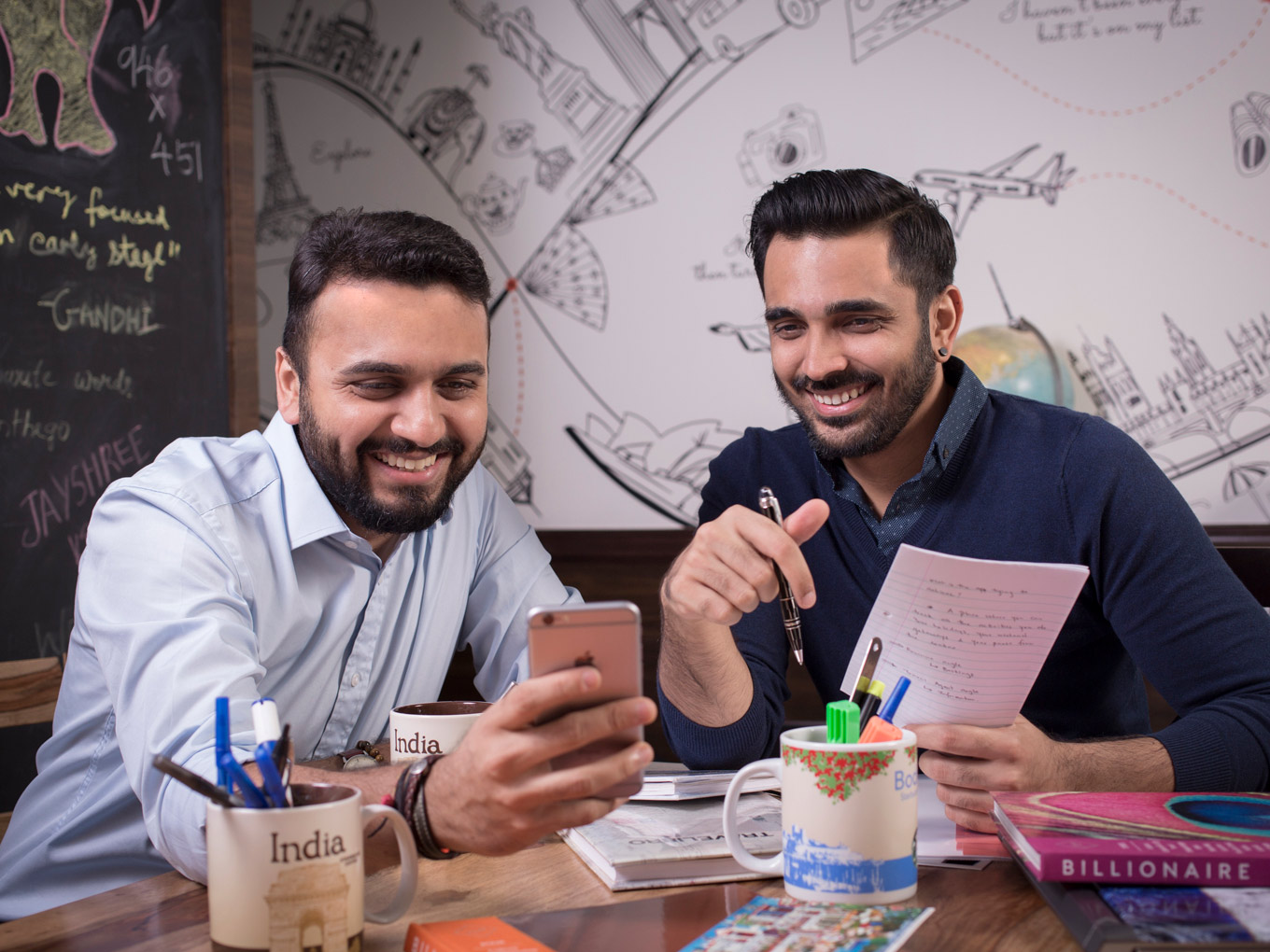 Since its inception in 2014, TraveLibro has grown to become a digital haven for travellers to record their memories. It is the classic amalgamation of Instagram and traditional travel blogs and gives travellers the option to encapsulate their trip in a digital timeline with the help of photos, videos, descriptions, and locations, for other travellers to follow.

Idea To Reality: The Inception Of TraveLibro

The idea of TraveLibro came to Shah and Gala when they were on a holiday in the UK. They had been to London several times before but were struggling to recall some of the places they had visited on their previous trips.

“This gave birth to the idea of an app and a portal that would allow you to capture your entire travel experience together on a shared time to relive your entire trip at any moment through your life,’’ says Shah.

As with any new idea/product, TraveLibro also had its fair share of rehashing and revamping. The startup initially launched a platform that offered the option of sharing past travel memories through itineraries, along with a travel planner, metasearch, a connect with agents feature, and destination information.

“But being a small team it was difficult to scale all of the above. Besides, the audience visiting TraveLibro had an overdose of information and were not being able to relate our main offering. This gave rise to TraveLibro 2.0,’’ says Shah.

Available on iOS, Android, and desktop, TraveLibro enables users to build a global social network where they can capture their travel experiences in live ‘On-The-Go’ stories via photos, videos, reviews, and thoughts, chronologically. It also enables them to publish and share their journeys as a video and photo log. Users can rate and review their experiences of the places they visit within a timeline of the events captured.

The memories can be put up on a shared timeline with family, friends, and groups travelling together, so people don’t need to individually capture and share moments via emails, stories on other platforms or chats. People travelling together can document things together, thereby saving time and effort. TraveLibro also enables users to share their experiences on multiple social platforms to inspire other travellers to plan their holidays based on others’ experiences and reviews.

A Single, Unified Destination For Globetrotters

On the platform 97% of the influencers are from outside India, with 33% being from the US

30% from Europe and 18% from India. Some of the influencers on the platform are Jack Morris of Do You Travel, Lauren Bullen of Gypsea Lust  and Jennifer Tuffen of Izkiz

“One of the issues we face as travel bloggers is being able to convey all our media (photos and video clips) to our followers in an organised way. We love TraveLibro because it enables us to put them all into one ‘Journey’ and post them as a ‘Card’,” says Collette from, roamaroo, a couple’s travel blog. 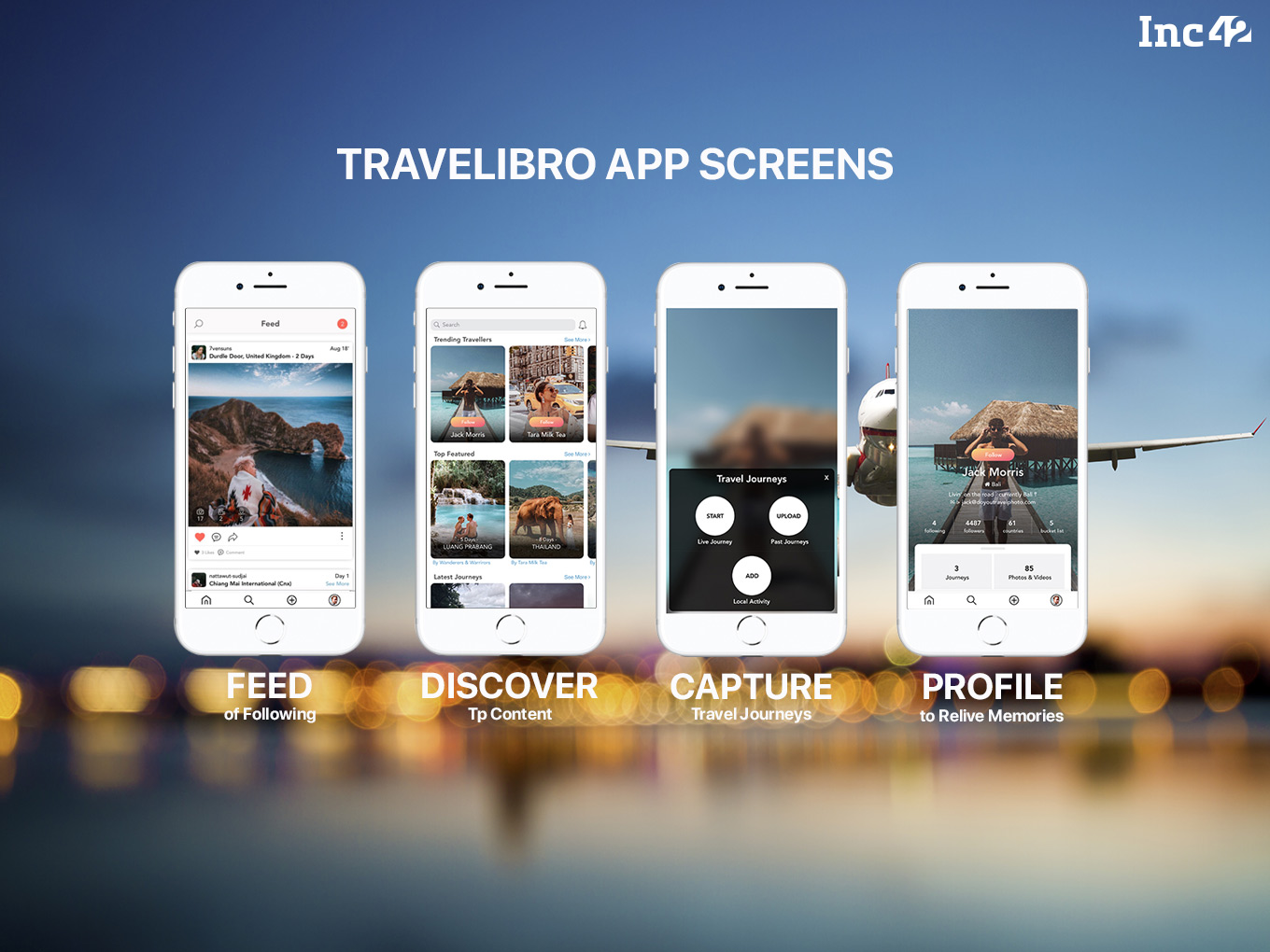 Travel as a segment in India is booming. India is the most digitally-advanced nation where travel is concerned in terms of using digital tools for planning and booking a journey, according to a recent report. Hotel bookings, especially are a major area where people spend time online when planning a holiday. Players like Cleartrip, MakeMyTrip, Yatra have found immense success and serve as the mecca for bookings.

Travel apps, on the other hand like TraveLibro still need catching up from Indian players, at the moment Polarsteps, and Journi, which are travel-based apps based out of the EU are what TraveLibro considers as competition. Though the market is still niche in India with few entrants in the space, TraveLibro is well aware of the sky-rocketing potential of the sector and is not slow to innovate to keep its first-mover advantage ahead in the game.

TraveLibro: Making Headway In Its Journey One Step At A Time

One of the key growth-hacking techniques the platform has deployed has been working with top influencers in the travel space and getting them to influence their audiences on other social networks about TraveLibro.

TraveLibro is heavily dominated by Millennials’ love for social media. The average age groups on the platform are 18-24 and 25-33, with women making up a larger chunk of the user-base at  57% and men following in close at 43%.

At present, one of the key focus areas for TraveLibro is ensuring the data privacy and security of its users. The company has ensured GDPR compliance for the same.

“We are using some of the best security protocols to ensure that our systems are not hacked. Each user has the option of selecting their privacy settings within the app too,” emphasises Gala.

The platform, though English-oriented, has no barriers for users of other languages. “A lot of users have been recording their journeys in their local languages. We have over 250 journeys in Italian and German,” says Shah.

With plans to add direct messaging, a travel book feature, that allows one can to print a coffee table book on one’s journeys, blogs and vlog-sharing feature on the platform, TraveLibro is all set to further up its game to become a one-stop destination for discovery and sharing of travel-related inspirational stories. 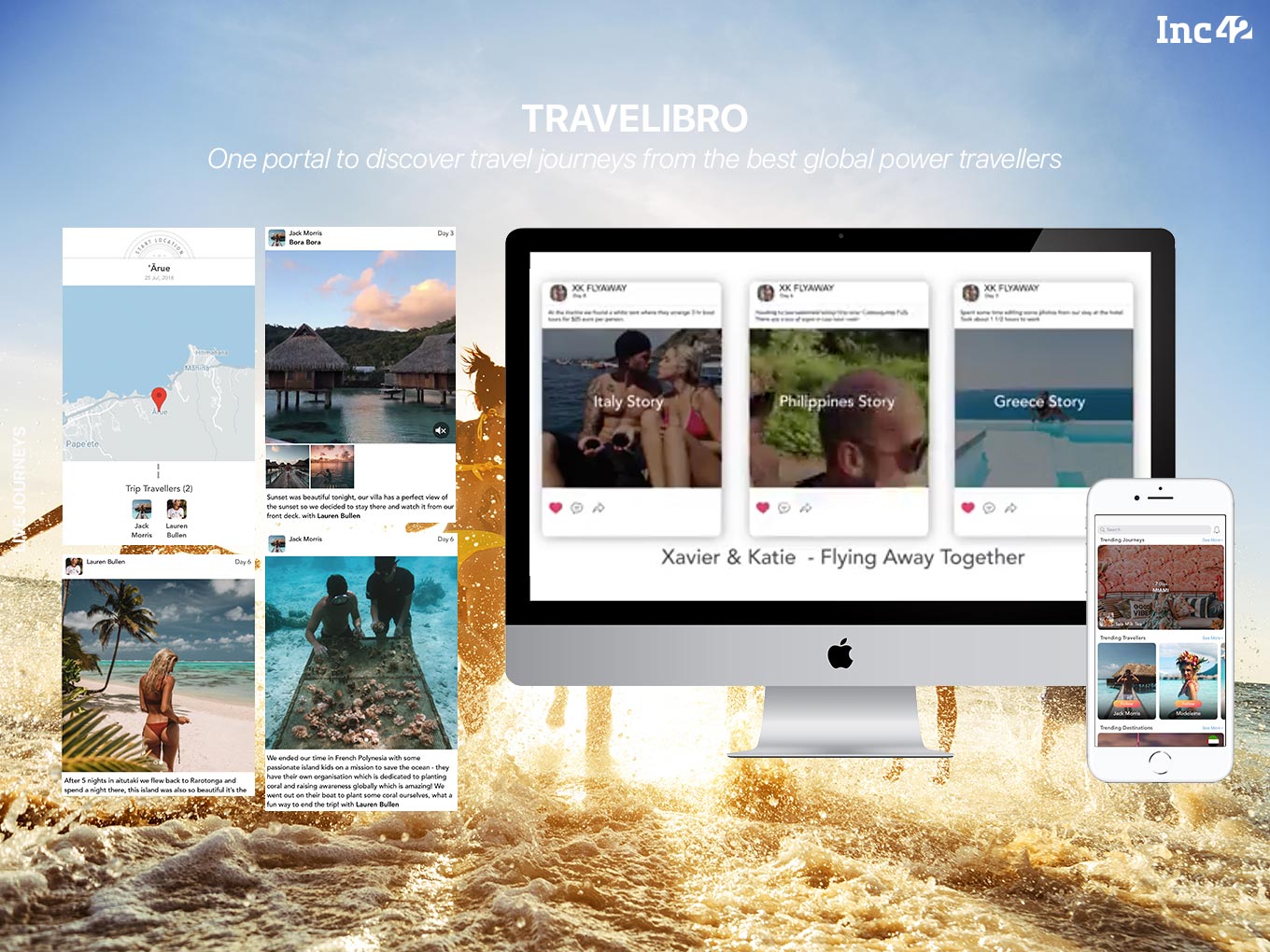 The trend of documenting travel on digital platforms started with solo travellers, bloggers, and digital nomads looking at travel as more than just a vacation — travel became therapy, a religion, and a part of one’s identity. It was this emerging meaning of travel for the traveller that found its representation on social media platforms.

Whether it was for a like or a reaction or simply to shout from the rooftops — the new way being ‘checking in’ and ‘tagging’ places and people on social media platforms — where one was, documenting travel became important. While some stories were a mere repository of memories, other started serving as the base on which would-be travellers started planning their future holidays.

Considering travel has become almost as essential for the soul as food is for the body, social media platforms that enable travellers to share and store their memories for posterity online are only set to grow. And TraveLibro seems to have recognised this need early on and made a headstart in the journey.