This App is Trying to Keep the Indian Streets Clean

This App is Trying to Keep the Indian Streets Clean Prime Minister Narendra Modi’s “Swachh Bharat” Campaign has really taken off on a high note and there is healthy participation from all parts of the country. Be it small villages and towns or metropolitan cities or even government offices. People from different walks of life have warmly welcomed it and this includes everyone from the neighborhood tea vendor to the youth of the country. Some of them have even gone ahead and created mobile apps to assist citizens and the government in streamlining the entire process of making our country a cleaner, better place to live in. Today, we review one such app.

The Swachh Bharat App, created by Mahek Shah, a 2007 mechanical engineering pass-out from IIT Madras and a MBA in sustainable energy and product design management from Politecnico Di Milano is one of the unique apps that helps you submit reports about unclean places in your area. Launched on the 28th of September 2008 on the Google Play Store, the app allows users to submit reports of unclean dirt areas in their vicinity which they then use to “Map the dirty/unhygienic areas.” This report is then curated by the team and submitted to the PMO office by post on a monthly basis. Currently available on Android devices, the iOS version of the app is presently under review and should be available on the App Store soon.

The vision behind it

Like the many others out there, Mahek is also one of the true believers of the PM’s vision of making India clean by the ear 2019. He believes that mapping and documenting a problem is the first step towards solving it and with the help of GPS and Time-stamp integration in the app, he is working to make things easier for the local authorities and municipal corporations which are known to be resource starved. Here’s what you can do in the first version of the app.

One just need to select a appropriate location and tweet it with a picture. 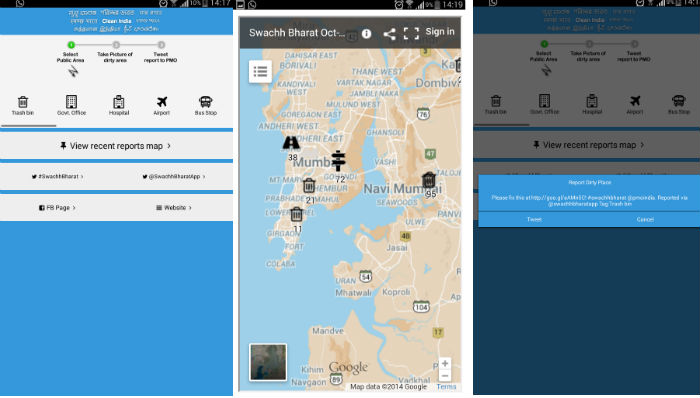 The journey so far

The app has got a considerable response since it went live with around 1980 users (hopefully will touch 2000 today, the 10th of November 2014 according to Mahek) who have submitted a total of 103 reports as of today of which 60 are available on their website. Now this can be considered to be a really good response considering that Mahek has spent a mere 300 Rupees on marketing it post launch.

“The entire publicity and marketing has been purely done through word of mouth. We hardly needed to invest for marketing. This is mainly because of our USP of submitting reports directly to the PMO which is currently not being done by other apps. While they have many fancy features such as tagging your friends on social media platforms and sharing updates, I believe that getting the officials involved is what matters most and that is what we aim to do.”