How Deeptech Startup SirionLabs Is Navigating The $2.5 Tn Enterprise Software Maze In India

How Deeptech Startup SirionLabs Is Navigating The $2.5 Tn Enterprise Software Maze In India 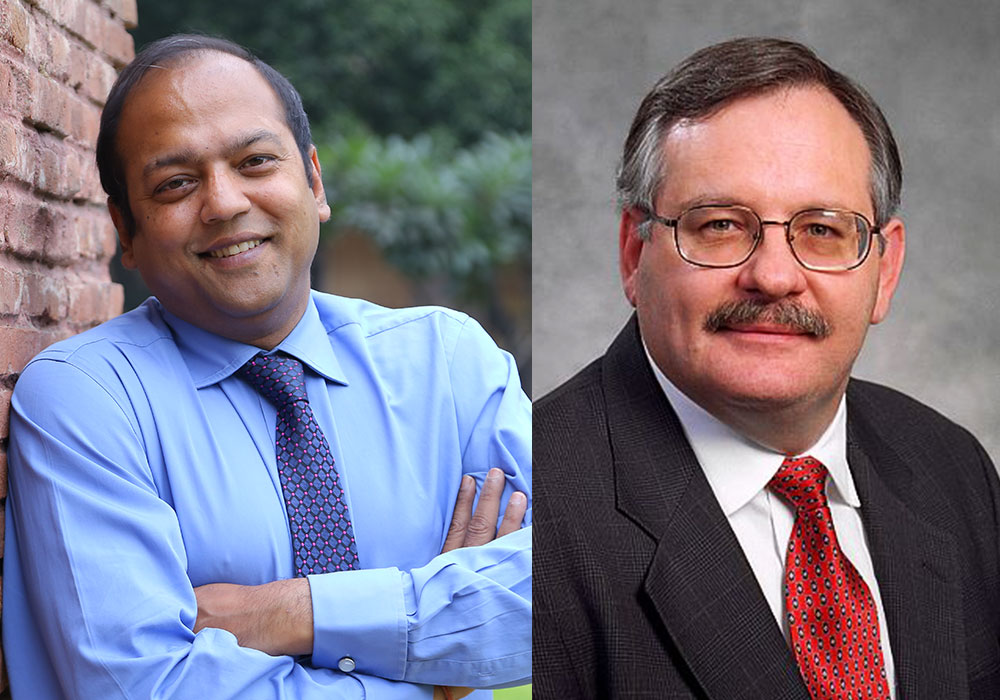 [Note: This article is part of The Junction Series. We will be covering the DeepTech and EnterpriseTech sector in detail at The Junction 2017 in Jaipur. Learn more about The Junction here!]

Entrepreneur Ajay Agrawal certainly believes in the adage. He started his first company, UnitedLex Corporation – a legal process outsourcing company – in 2006, which claims to have $250 Mn in assets and committed capital, currently.

“Even in UnitedLex, we were always trying to build software applications to automate any aspect of the manual work that we were doing for our clients. And some of those applications were so successful that it sort of give me a flavour to do it on a much larger scale – as in a product environment rather than a services environment,” he begins.

This was the time when he realised the struggle companies have to make to maintain their buyer-supplier environment. Taking the plunge he, along with ex-global head of outsourcing in General Motors, Claude Marais, began brainstorming in November 2012 and envisioned SirionLabs – an enterprise SaaS platform based in Gurugram in December 2014.

Today, two years after the official launch, SirionLabs has over 15 clients (mostly Fortune-listed corporations) including the likes of Western Union, Vodafone, BP, Vestas Wind Systems and University College London Hospitals (UCLH). As claimed by the founders, it has also been awarded the number one B2B startup in India by IBM and featured as the ‘Cool Vendor’ of the year 2015 by Gartner.

The company has already raised over $16 Mn from investors such as Sequoia Capital, QualGro ASEAN Fund, and Canopy Ventures and has a team of 200+ professionals across offices in India, US, UK, and Europe, making it a global platform in the true sense of the word.

SirionLabs In The Making: Origin Story

“The technology for procurement and supplier management that is dominant in the world today, was built at a time when the majority of suppliers are providing goods and commodities to the buyers. However, over the last 20-25 years, the consumption pattern has shifted away (from goods and commodities) to complex services. Therefore, the technology that was designed in the mid-90s is no longer serving them in the way it was intended to. And as a result, the habit of relying more and more on manual management and oversight and less and less on technology. And that’s where Sirion comes in and fills the gap.”

To this end, the duo brought together a team of experts – half from the suppliers’ side and half from the buyers’ side – and started working on the prototype design. Soon after that, they organised an industry design workshop, inviting 30 of the largest organisations of the world, companies like British Telecom, British Petroleum, Google and so on.  “We had a collaborative, six-month, collective design process where we articulated requirements, showed them what the future would look like, and based on all the things that we heard, we froze the requirements, and started building the product, in May 2013,” he says.

The beta product was then launched in June 2013 and after four or five months, it got picked up by Western Union, which was then in the process of fixing its supplier management environment. “So we got a Fortune 500 company in a year of launching services, which is very unusual for a deep enterprise product,” boasts Ajay.

This early success attracted the attention of Sequoia Capital in April 2014 and it infused $4.7 Mn, paving the way for the next version – 1.0 – of the product and establishing SirionLabs as a startup managing complex services engagements on an integrated platform.

SirionLabs presently offers two products – ‘Supplier Governance’ and ‘Revenue Assurance’ for buyers and suppliers of complex services respectively. When prodded to explain more on what ‘complex services’ stands for, Ajay elaborates, “Complex services are of two types. One is provided as part of outsourcing, whether it is IT, BPO, facilities management of third party logistics. The second is what we call ‘Goods-as-a-service.’ For example, when a telecom company doesn’t want to spend a billion dollars to buy telecom equipment, it can go to a company like Ericsson, Nokia or Huawei, and can ask them to set up the network operating center (NOC), bridge over their equipment, install, and run it for the telecom company. So, now that company (Ericsson, Nokia,etc.) is no longer in the business of selling equipment, they are in the business of installing, managing and maintaining equipment for its clients.”

Coming to the functionality of the tool – for buyers, it simplifies the management of key suppliers by automating the full spectrum of contracts, performance, financial, risk and relationship management on a single, integrated platform. On the other hand, for suppliers, it enhances profitability, transparency, and reduces risk in large enterprise accounts.

“What the tool does is, apply a lot of AI in automatically reading the contracts – isolating from the contract, or extracting from the contract – the deliverables and the obligations that are expected to be performed as part of the contract. It actually allows you to do the work in a collaborative way in the platform itself using micro configuring workflows and auto–validation loops,” says Ajay.

So, based on what is written in the contract and actual performance, the system can create a predictive invoice, which then gets compared to the actual invoice submitted by the supplier or approved by the buyer.

Simplifying the context, Ajay explains, “Suppose, the supplier invoice is for $100, and they were supposed to do 10 different things, but did only eight and billed you for all 10. Now, if you don’t know that, you will pay the complete amount. But if you’re aware and aware in real-time then you can catch the supplier by the ears, and say that I am going to pay only $80.”

Furthermore, SirionLabs brings in a lot of artificial intelligence in handling areas that traditionally included very unstructured data – like contracts and performances, along with its advanced analytics. “So, how we do the work is just one aspect of it, how we analyse all that data, and derive actionable insights, for changing the way we work in future, that is another key aspect of Sirion,” says Ajay.

As Ajay recalls, “When I look back at 2012, finding the right kind of technical talent, to build a product, with sharp, loyal, and committed engineers was one of the biggest challenges that we face here in India.”

The other was domain knowledge and domain expertise. “When it comes to analysing the performance or auditing the invoicing of data, those were new areas for us,” he says.

“And finally our mentality as Indians. When we work in product companies, it tends to be a very service-oriented culture. So, converting people into thinking modularly, into thinking deep about the product in front of them, that proved surprisingly challenging for us,” he adds.

When asked about the competition with established companies like IBM, SAP, Freshdesk etc., Ajay says, “The companies are providing (one) point solutions, for people who will only look at the solution for contracting piece, or performance piece, or the finance piece. But they don’t offer the wider solution.”

‘The World’s Worst Place To Sell Enterprise Software Is India’

Being a global company, SirionLabs’ network is spread across continents. When we asked about the difference he felt in the various markets, he says, “The most mature markets are North America, the Nordics (Finland, Denmark, Sweden), and Australia.  The second level of maturity comes in UK and the rest of Europe without the Nordics. And the third level of maturity, comes in the eastern European and, to some extent, Middle Eastern markets. And even I would add to this far East Asia, Africa to some extent. The world’s worst place to sell enterprise software is India.”

Ouch! When the founder of a well-established global company makes such a drastic statement, it requires some probing.

Ajay explains his rather negative sentiments,

“Indian companies fundamentally have no respect for innovation or copyright or automation. Their fundamental belief is that everything should be very very cheap, and everything can be replicated and copied. So what most Indian companies are trying to do, whenever they meet you, they try to look at your software, and they ask their engineers to copy it. The other thing is that India has so much cheap labour that there is no incentive for Indian CEOs and managers, to automate their operations, and to replace human beings with technology. For instance, setting up a small team of 20 people in Gurugram will require an annual expenditure of maximum INR 70 Lakhs-INR 80 Lakhs here. If you try to do that in America, it would cost almost $2 Mn – $3 Mn, so an American company does not have that option. They have to constantly keep automating. For all of these reasons India is the last place in this world, that any software product company CEO should target from the customer perspective. I would much rather go to Mozambique, Nigeria and South Africa, before coming to India. Those are better markets.”

But despite all odds, innovation is still happening in India in the enterprise software segment. To this Ajay heartily agreed that this is exactly the beauty of India where, despite the fact that there is no actual market for software in the country, Indians are still able to create world-class products and are selling them in other parts of the world. Ajay further adds,

“For me, that is the real magic or the miracle. For the next 20-30 years, because our labour situation will remain low, the Indian companies don’t have global best operating practices, and they will always struggle to operate on the global scale. The role of software in Indian operations will always remain a problem – that is not top of mind or a funded problem – and I don’t see this changing at all. There is no driver for this change.

“And the only way this can change is if the Indian government takes steps like Singapore where in the government encourages companies to buy local technology by giving them tax relief. But as you know, this involves a certain level of foresight and patriotism and pride in building technology in India, and that we will definitely have post 500-600 years from now,” he concludes.

For one, Ajay’s views on the Indian market feels like a blow to the proud patriotism imbibed in every Indian. But as they say, the truth is always bitter and hard to swallow. He has described ground reality, indicating a chance for upcoming and existing enterprise software companies in India to turn towards homegrown innovation.

With Gartner prescribing the Indian software market to grow at a rate of 12.8% in 2017, the opportunity lies exactly here, all that is require is a solid preparation on the sector’s end.

SirionLabs is already making strides by solving end-to-end problems in contracts and supply chain management. With an established business model, enough funds and a product that has found takers in elite companies, it seems to have the road map for the future sorted out. But, going forward, with competitors and contenders all vying for the trillion dollar share of the market, how long it will be able to sustain its growth and thrive, remains to be seen.