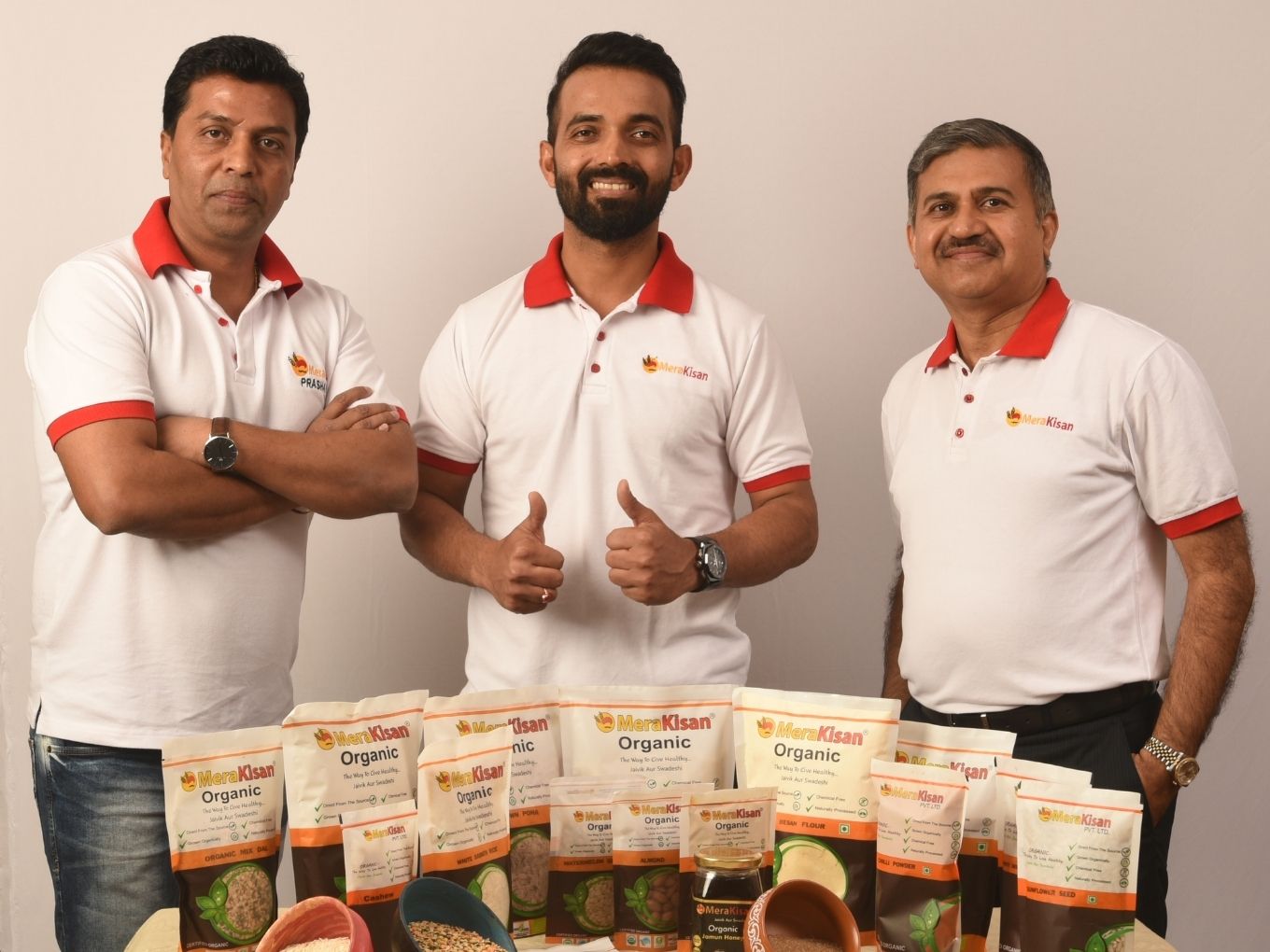 It claims to have about 12K certified organic farmers on Organic Pandit, its marketplace-like platform for consumers and suppliers

While technology has certainly changed the game in nearly every business sector in India, the pie is not just split among tech startups. Corporate giants, which built huge empires through traditional means, have also joined the tech revolution in the 21st century. And it’s not always as competition to startups but also as partners and backers.

That was the idea behind the Mahindra Group investing in Pune-based agritech startup MeraKisan in September 2016. Mahindra Agri Solutions Ltd (MASL), a subsidiary of the group, invested in the startup along with Belgian company Univeg (Greenyard Foods) through a 60:40 joint venture called Mahindra Univeg.

MASL was said to be on the lookout for startups that were addressing the market linkage problems in the country — at a time when agritech was just starting to get a foothold in the tech sector. This meant making the supply chain efficient so that Mahindra’s customers and farmers could earn a bigger share of the agricultural income.

The backing from Mahindra, in fact, helped MeraKisan branch out from supplying produce from farmers to consumers to developing organic farming solutions and products.

“Mahindra has not only helped us in scaling the business, but also provided the right access to the marketplace, knowledge and talent. We were one of the initial players in the industry to be supplying fresh fruits and vegetables. And then we moved to organic produce for online grocery delivery companies and consumers,” founder Prashanth Patil told Inc42.

Besides fulfilling its original vision — addressing market linkage problems for farmers — the switch to the premium organic category is peculiar, particularly given that the demand has not yet matured for this category.

Patil told us that while the initial idea was about solving supply inefficiencies at a macro level, due to the lack of infrastructure in terms of procurement facilities at the village level and produce quality issues, the focus shifted to these areas. In 2019, MeraKisan decided to turn its focus to organic produce, grains and food.

So far, MeraKisan claims to have impacted the lives of over 96K farmers and up to 400-500 businesses across India.

With changing trends in the metros and Tier-1 cities, it’s not just consumers that are moving to organic food and produce. Farmers have become more aware of what it takes and it’s not just about not using fertilisers. MeraKisan turned its focus to organic food not only to improve the supply in this particular category, but also because this category has higher margins for farmers as well as startups working with farmers.

Organic Pandit, its marketplace-like platform, connects organic farmers, producers, suppliers as well as customers. MeraKisan claims that this focus on organic food and produce sets it apart from the hordes of players that have entered the food supply chain space, including Ninjacart, Jumbotail, CropIn, FreshWorld, Aker Foods and AgroStar. The competitors in this area are not focussed wholly on the organic category, but on the overall fresh produce supply for consumers and businesses. 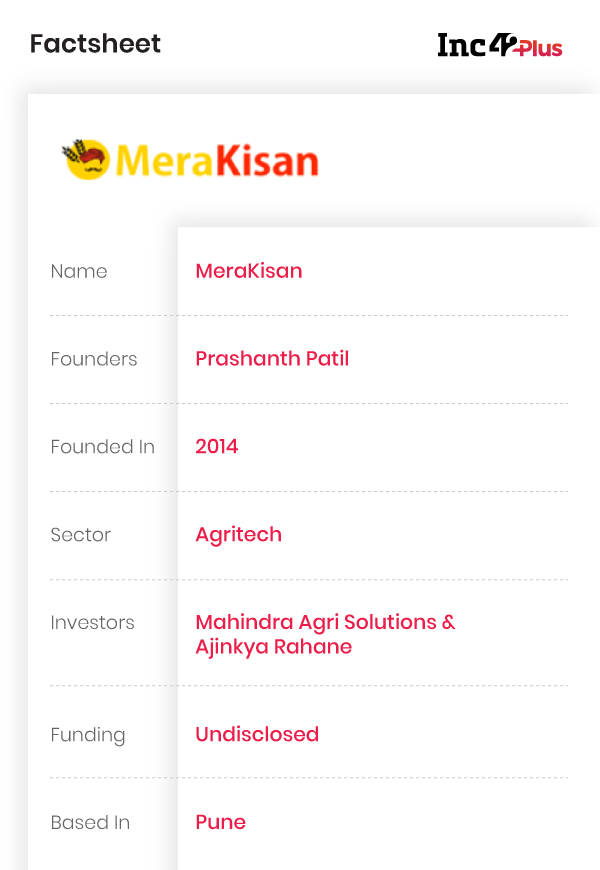 Why MeraKisan Pivoted To Organic Produce

Founded in 2014 by Patil, MeraKisan began with a primary focus on fresh fruits and vegetables, and “20% organic produce” the founder claimed.

Besides this, it has introduced QR-code based traceability for all produce sold through Organic Pandit. Customers can get details of the products such as organic certifications, farmers details and others by scanning this code.

Citing industry metrics, Patil said that India has about 8.42 Lakh organic farmers in the country. Out of this, there are about 2,462 organic farmer groups and close to 4,600 companies in the space (across value chains and operations).  MeraKisan currently has over 12K certified organic farmers on its platform, catering to both consumers and businesses in India as well as international markets, including Australia, China and others.

During the Covid-19 phase, the company did face hurdles in its operations due to the lockdown, shortage of labour, supply chain disruption and other challenges. It partnered with logistics tech startups for last-mile delivery, but the processing unit was still hit. “For instance, if we were doing 20-30 tons of processing a day, in Covid-19 times, we are doing about seven to eight tons,” Patil added.

MeraKisan is present in almost 22 cities, including Pune, Mumbai, Delhi NCR, Chennai and Hyderabad among others, across 900+ stores. A big focus during these times of crisis has been its own app.

The company is also developing private label products under its own brand name ‘MeraKisan’ with a D2C approach to distribution. It has over 147 SKUs in organic fruits and vegetables, organic groceries, organic oil and ghee and superfoods among others.

Today, MeraKisan claims to have a strong presence in both online as well as offline mode. For instance, its ‘MeraKisan Daily’ app drove nearly 90% sales in Pune, its home town in recent weeks. “Overall, 70% of the business came from online channels including Zomato, Swiggy, MeraKisan Daily app etc, and 30% from offline stores,” added Patil

Interestingly, he also added that these numbers from Zomato and Swiggy in terms of grocery delivery in recent times are slowly declining. This means the space will open up for more consumer-facing products. “We will slowly move away from B2B and will start focusing on catering to the B2C, given the purchase economics and demand for our products, in the next two years.”