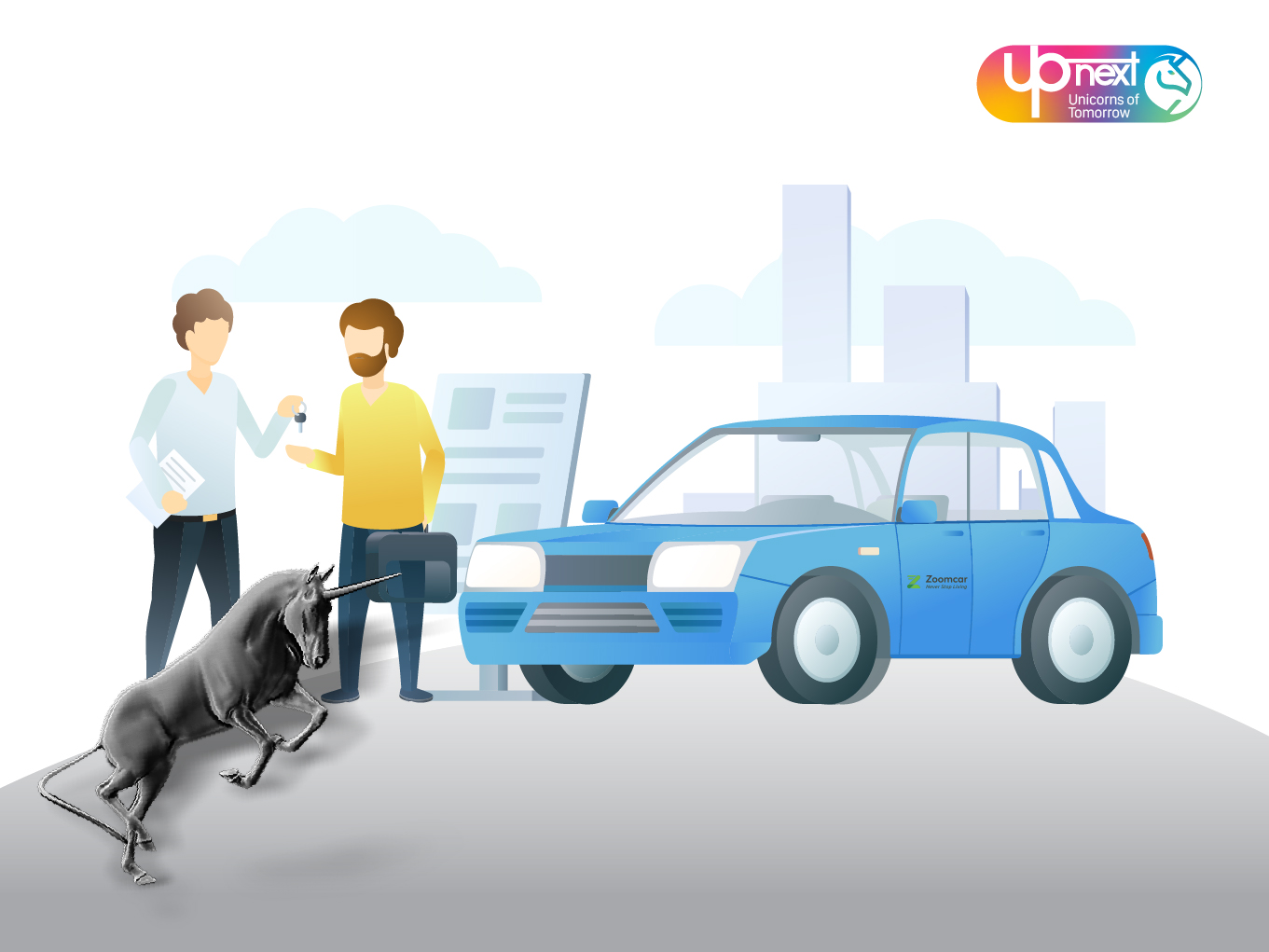 With recent competition from Ola, Zoomcar is focussing on building smart capabilities and real-time vehicle analytics

To celebrate India’s rising startups, Inc42 is profiling a new soonicorn every Friday in the Inc42 UpNext: Unicorns Of Tomorrow series. For the next few months, we will be speaking to founders and cofounders at these potential unicorns and shining light on their journeys and growth stories. This time, we take a look at self-drive car rental startup Zoomcar.

Amid growing urban congestion and air pollution levels, the need for sustainable mobility solutions has become apparent and is something most automotive companies are working towards. Even within the transport tech arena, many players are trying to bag the piece of the pie with solutions ranging from carpooling to self-drive rentals to electric vehicle fleets.

While big mobility startups such as Uber and Ola are yet to introduce electric cars in their fleets in any significant manner. Shared mobility startup Zoomcar has already helped bring more than 500 EVs to the Indian roads.

Talking to Inc42, founder Greg Moran claimed that Zoomcar is set to add another 1000 cars to its fleet within the next year and a further 10K cars by 2021. He also noted Zoomcar is planning to introduce new electric vehicle-related offerings in the next few months.

“The very business model of Zoomcar is centered on reducing the burden of increasing vehicles on the infrastructure and the environment. In my opinion, a car shared takes 20 other cars off the road,” said Moran.

The Sequoia-backed company was founded by David Back and Greg Moran in 2012. Currently, Zoomcar is present in more than 45 cities, including Bengaluru, Delhi, Mumbai, Kochi and Pune among others. The company serves over three thousand customers every day and has over 48 lakh subscribers and a fleet of over 6.5K cars. 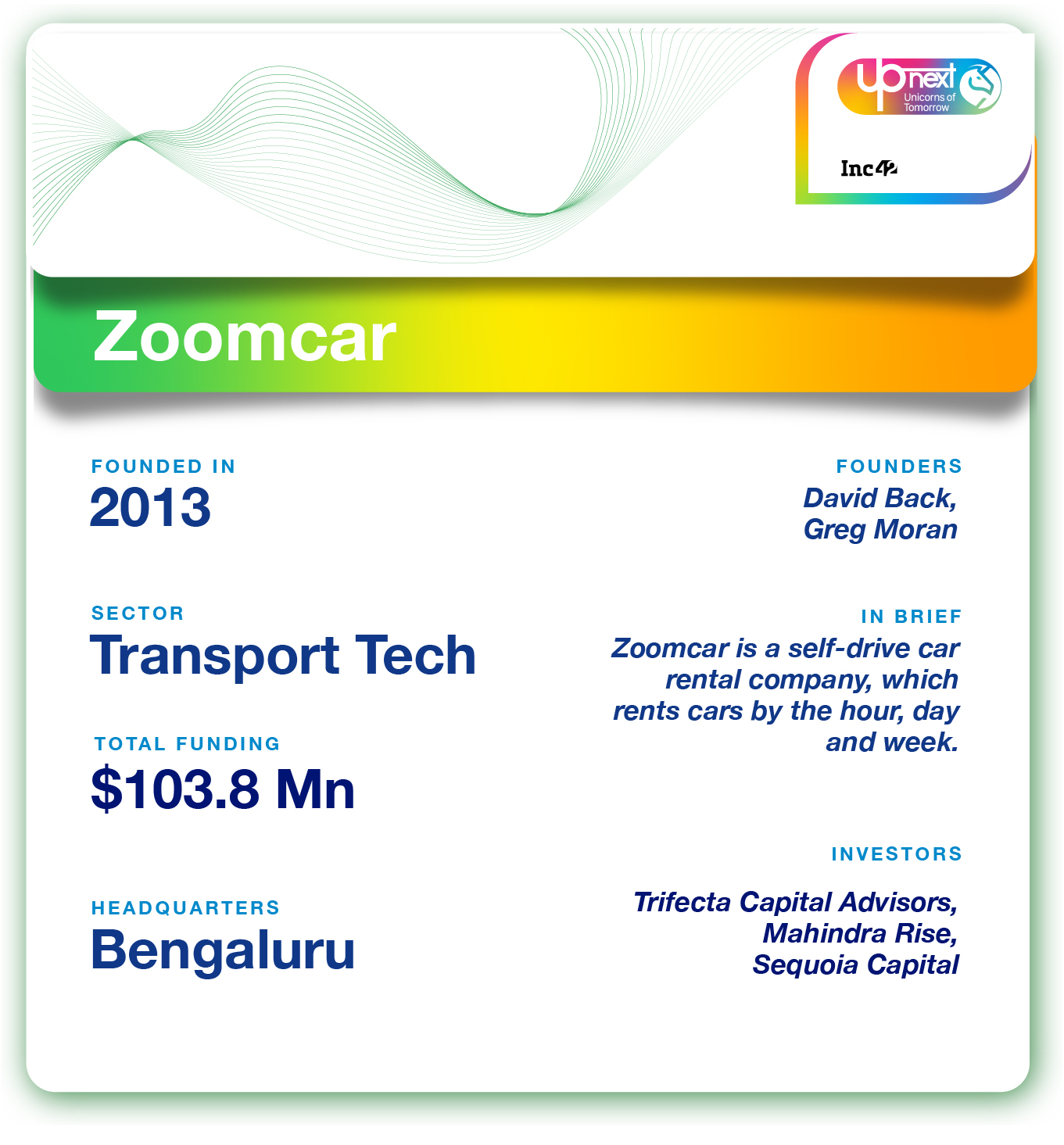 What Will Drive Zoomcar’s Unicorn Status?

Talking about the factors that would help Zoomcar reach a valuation of $1 Bn, Moran said that it would essentially be driven through expansion in terms of market share and overall wherewithal.

“One of our main focus areas has been increasing this exponentially by adding more and more vehicle models which will be offered on a subscription basis. We are also aggressively partnering the major automobile OEMs to offer a subscription as an alternative to vehicle ownership,” Moran emphasised.

India is said to have 127 Mn driving license holders with a ‘cars to people’ ratio of 22:1000 in 2019. The consumer preference leans towards renting bigger, safer and more powerful cars for intercity trips, which can accommodate typical-sized Indian families to the self-driving market size and addressable base.

A Mobility Insights 2019 report estimates the self-driving market to be a $100 Mn opportunity in India, which is currently highly under-penetrated. Moran claims that Zoomcar currently owns about 80% of the market in the self-driven space.

Further, in the shared subscription mobility market Zoomcar also plays the role of the lender for more than 10K cars, as compared to 4K listings on its competition, peer-to-peer car rental company Drivezy.

In October 2019, India’s mobility unicorn Ola also entered self-driving rentals with the launch of Ola Drive. Since then, Zoomcar has been adding funds to its Indian entity. In December 2019, Zoomcar received $4.8 Mn from its US-based parent company Zoomcar Inc. In January 2020, the company again raised $30 Mn from Sony Innovation Fund, the venture capital wing of electronics giant Sony.

Till now, Zoomcar has raised around $100 Mn across funding rounds. Its investors include Trifecta Capital, InnoVen Capital, Sequoia Capital, Empire Angels, Mahindra and Mahindra, among others.

Zoomcar claims to have grown at over 2x this year compared to last year because of the higher platform inventory.

Last month, Zoomcar had shared plans to invest more towards expanding its presence across India, technology, data science and innovations around the internet of things (IoT).

Building A Smart Fleet For 2020

Doubling down on its commitment to disrupting the status quo, Zoomcar has introduced features such as car data-tracking solution Cadabra and the AI-powered Driver Scorecard. These will complement its primary self-driving business.

Cadabra is a vehicular data tracking solution that plugs into the car’s on-board diagnostics (OBD-II) port and collects information such as distance travelled, fuel usage, engine health, seat belt usage, clutch performance and more. This functionality comes with Bluetooth and 4G connectivity allowing cars to interact with emergency services in case of an accident. In addition to this, the feature helps drivers optimise riding speeds, save fuel, and get engine alerts for maintenance.

The company has also recently launched the Driver Score feature, which vehicle-agnostic. The AI and machine learning algorithm tracks the mechanical condition of the car being driven, the driving style and behaviour, and identifies critical events while driving and rates it on a scale of 0-100, said Moran.

The company plans to invest its recent fundraise towards growth, technology and data science with a strong focus on enhancing an industry-leading IoT layout.

And that could be the key difference for Zoomcar as it battles Drivezy and now Ola in the self-driving space. The Driver Score and Cadabra platforms are extensible to other services and could even be integrated into larger fleets managed by large corporates or within the logistics sector. But for now, Zoomcar is focussed on its strong points and with self-driving becoming a real option in the metros where new car ownership has fallen quite a bit in the last year.