This Startup Wants To Turn Kiranas Into Wi-Fi Hotspots, But Will Cheap Mobile Internet Kill Its Dream?

This Startup Wants To Turn Kiranas Into Wi-Fi Hotspots, But Will Cheap Mobile Internet Kill Its Dream? 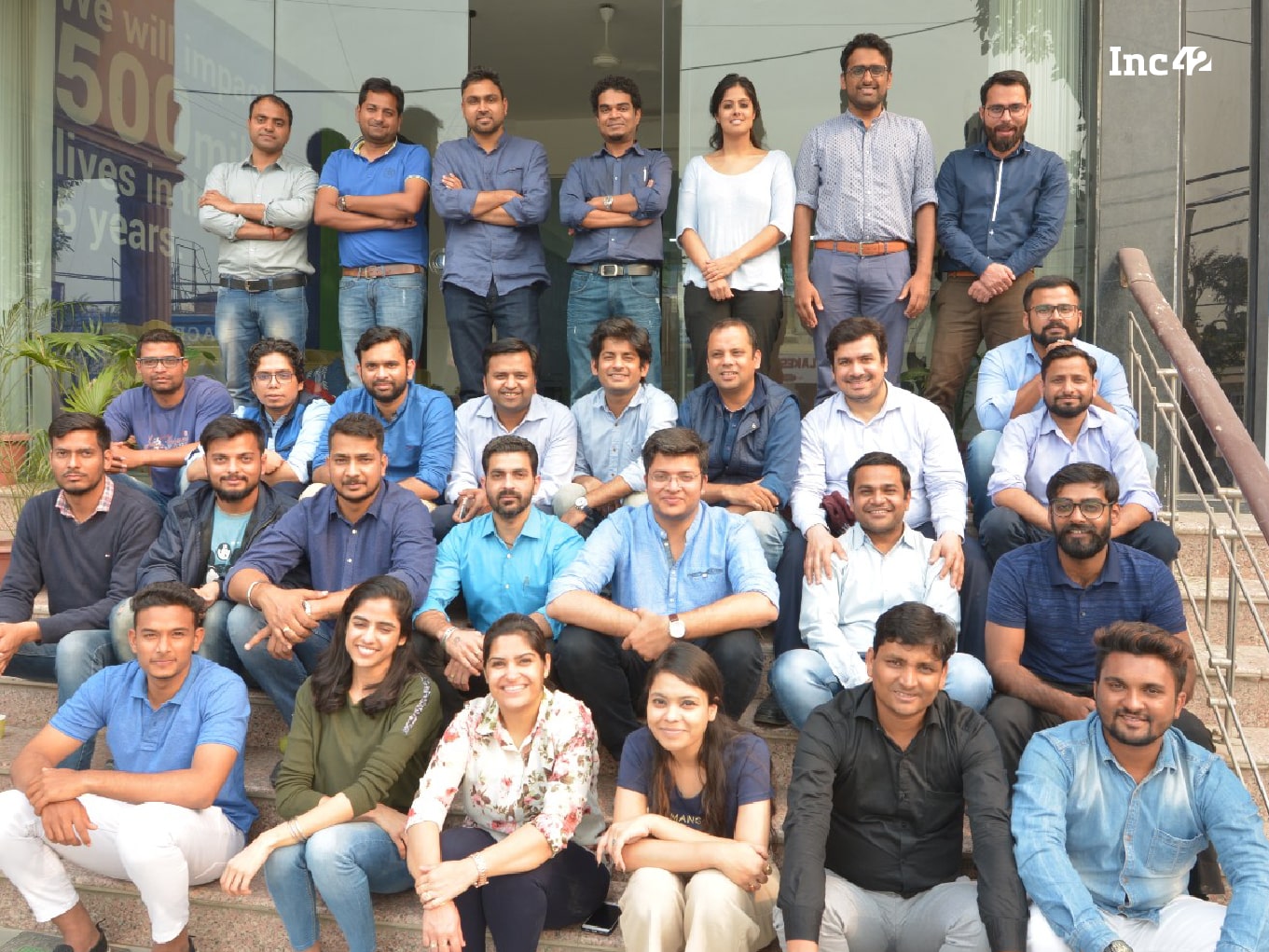 “We want to make internet access so affordable that people will pick a plan instead of a packet of chips or a chocolate bar one gets for INR 5,” says Satyam Darmora, founder of the internet startup i2e1 (Information to everyone), explaining why all and sundry will pay for the company’s Wi-Fi hotspot service, to be available even at a nukkad tea shop.

Aiming to set up a ‘digitalised’ India, the Delhi-based startup has already launched an industry-first public data office (PDO) as part of the Indian government’s Pradhan Mantri Wi-fi Access Network Interface (PM-WANI) initiative. When i2e1 was set up in 2015 by Darmora and five other cofounders (Nishit Aggarwal, Gaurav Bansal, Ashutosh Mishra, Maanas Dwivedi and Anugrah Adams; most of them are from IITs and IIMs), they decided to work on user analytics and advertising solutions in the retail space.

Using its services, retailers offered free Wi-Fi to customers and synced promotional offers through effective user profiling. “Imagine the Starbucks model for upmarket retailers and cafés. That’s what we were doing,” Darmora tells Inc42. But the company quickly changed its primary goal, seeking a better way to provide low-cost internet to the masses. It eventually came up with the current public Wi-Fi hotspot solution after the Telecom Regulatory Authority of India (TRAI) floated the PM-WANI concept in 2016, a government initiative to expand wireless internet connectivity across the country.

Even before the pivot, the startup’s operations attracted investors. In 2017, the company raised $3 million in Series A, led by impact investment firm Omidyar Network and Auxano Business Ventures. Its existing investors also took part in the round. Earlier, in December 2015, i2e1 also raised $500,000 from growX Ventures, 3one4capital and a few angel investors.

PDOs are designed much like the ubiquitous PCOs or public communication offices of the past. Any store can double up as a PDO managed by aggregators or PDOAs like i2e1, which establish, maintain and operate these Wi-Fi access points and deliver broadband services to subscribers. However, i2e1 and its ilk typically target small shops where owners are not likely to spend INR 30-40K on setting up their Wi-Fi solutions, says Darmora.

Besides, the cost incurred goes much beyond the Wi-Fi setup, hardware and internet expenses, and needs to cover licensing fees and data security expenditure. According to the Centre for Development of Telematics (C-DOT), a government-owned telecommunications technology development centre, a PDO setup can cost up to INR 50K. But packaged solutions for the same with a ready-to-use device and built-in security for a small subscription are meant to solve these problems, he explains. These hotspots will mostly cater to low-income user groups and neighbourhoods.

Setting up a PDO will be quite simple, though. If a neighbourhood shopkeeper wants to set up a PDO to supplement his income, he can contact the i2e1 sales channel. Plus, there will be an app to register individual users so that they can discover PM-WANI-compliant Wi-Fi hotspots in nearby areas and use those hotspots for affordable and seamless internet connectivity. C-DoT will also maintain a central registry of PDOs. Incidentally, i2e1 was the first operator to demonstrate a PM-WANI-compliant system for offering public Wi-Fi service, followed by Wifi Dabba, after TRAI launched a pilot in 2017.

“We expect to add around 2,500 PDOs under this PM-WANI model within the first 30 days, but the number can go up,” says Darmora. The company launched the first PDO at Kusumpur Pahari, a low-income neighbourhood in South Delhi, in late January this year, and expects to rapidly grow its user base. With this unit in place, residents of the area can access unlimited internet at 50 Mbps speed at INR 5 a day.

The bigger vision is to capture about 30-40% of the market. The Indian government aims to have around 2 Mn hotspots by the end of 2021 and 10 Mn more by 2022, which means i2e1 is looking to handle the business of 3-4 Mn PDOs as an aggregator. In fact, the government cleared this aggregator model last December after TRAI came up with the suggestion, and i2e1 is hoping to ride on the success of the scheme to grow its business.

Of Growth Plans And Challenges

According to TRAI data of November 2020, India had 742.4 Mn broadband subscribers out of which only 21.9 Mn are fixed broadband connections while the rest comprises mobile broadband users. Darmora says this is hardly adequate. Even if the government aims to add 10 million Wi-Fi hotspots, it will scale up the fixed broadband market by 50% over the next two years. “The beauty of this (PDO) model is that, as more and more hotspots are set up, ISPs will have more broadband connections and subscribers,” he says. So, partnerships with telcos, ISPs and local cable operators (LCOs) which offer last-mile internet connectivity will be an integral part of the growth strategy.

Currently, a shopkeeper has to pay up to INR 4,000 to procure an i2e1-enabled and PM-WANI-compliant Wi-Fi router (as seen on online marketplaces), supplied by partner brands like Wiom. In addition, there is a monthly subscription fee of INR 250 for the i2e1 app. The startup earns from the suite of software services integrated with devices and the app used by PDOs. In case a store is using an existing Wi-Fi not compliant with PM-WANI, i2e1 will upgrade it to the required firmware level. Although the margin is low at current scale, it will get increasingly profitable when thousands of units come up, says Darmora. The company is also planning to offer add-on analytics solutions to PDOs to increase the ticket size.

As of now, the startup’s customer acquisition cost (CAC) stands at 15-20% of the setup cost. It has not disclosed profit margins but claims to be operationally profitable since the early days. But to reach net profitability, i2e1 must drive scale. “We have priced our solutions to make sure that we are operationally profitable. However, this is a low-margin business and price points have to remain competitive to reach scale. We should be profitable at about 20,000 units,” says Darmora.

The company has not disclosed its margins on different offerings, either, but as the volume of units increases, it will be possible to lower the cost per unit, adds Darmora. It still offers retail analytics, but these cost more, starting from INR 1,000 a month depending on the nature of the solutions retailers are looking for. The company provides its analytics services to 3,500 retail hotspots, but scaling up in this space will require substantial funding.

“We have already demonstrated the technical feasibility and business viability of the offering. Now, we will look for growth money (funding) to expand it further,” says Darmora.

Although several companies participated in the TRAI PDO trials, i2e1’s key competition in this space is Bengaluru-based Wifi Dabba that started as an ISP. By the time TRAI completed the PDO trials, Wifi Dabba had 430 WANI-compliant access points, i2e1 had 157. In contrast, others had a single-digit presence. However, i2e1 is not an ISP like Wifi Dabba that builds custom routers and uses laser beams to transmit data without depending on underground cables. In brief, both companies work as PDO aggregators, but their core offerings are different.

Aditya Misra, Principal at Omidyar Network India that led the last round of funding in i2e1, says that fixed broadband services are still under-indexed in India compared to the world. The recently announced PM-WANI policy has the potential to ensure the delivery of affordable internet across rural, remote and underserved areas through Wi-Fi hotspots and help with substantial employment generation.

“In line with this vision, i2e1 is well-positioned to play a leading role in the PM-WANI initiative. It can empower millions of merchants with its technology so that they can resell sachet-sized, high-speed internet to their customers and augment their sales incomes,” he adds.

But the challenge lies elsewhere.

TRAI first proposed the PM-WANI initiative in July 2016, and the government finally approved it in December 2020. Meanwhile, in September 2016, Reliance Jio launched its initially free and still the cheapest mobile broadband services in India. Since then, mobile broadband usage has grown so rapidly that not even big tech companies like Facebook and Google have seen much traction for their public Wi-Fi services.

Facebook launched Express Wi-Fi with 500 local entrepreneurs who used to sell the service through vouchers priced at INR 10-20 for a day or INR 200-300 for a month. But the scheme failed to receive much user traction, say experts. Google, which had partnered with RailTel to offer free Wi-Fi at railway stations across the country, also scrapped the project in May 2020.

“India, specifically now, has among the cheapest mobile data per GB in the world, with mobile data prices having reduced by 95% in the last 5 years, as per TRAI in 2019. Today, Indian users consume close to 10 GB of data, each month, on average,” Google said in a blog post.

Given this scenario, how can a public Wi-Fi solutions company expect to be profitable?

There are two reasons. For starters, trouble-torn Indian telcos are itching to increase mobile tariffs, and it may happen soon. Second, the massive proliferation of edtech, telemedicine and work-from-home requirements over the past one year has opened up a market for a Wi-Fi supported stable internet connection that mobile networks cannot always guarantee.

In the Oct-Dec (2020) quarter, Airtel’s home business segment witnessed revenue growth of 2.3% YoY, with the highest-ever customer acquisition of more than 215,000, to reach a total base of 2.79 Mn, thus showing a growing customer interest in Wi-Fi connectivity.

Indeed, this is a huge opportunity for the likes of i2e1 to move past retailers and cater to the burgeoning consumer-facing internet businesses and new-age MSMEs who need analytics solutions. Moreover, the startup is also expecting many more innovations in this space. “In another five years, the country will probably witness an Airbnb or Uber of the internet. We can do it, but we also expect new startups to develop innovative models on top of our architecture. With a larger network in place, we will continue to build innovation and profitability,” says Darmora.

In spite of immense growth opportunities, future play will depend on how mobile internet services grow in India and put the PDO model to the test and whether there will be affordable personal devices to enable people to access Wi-Fi hotspot services. People can afford bite-size internet at INR 5 a day, but they still need INR 2,000+ devices to utilise it effectively.