TrustCheckr is a fraud preemption platform, founded by Adhip Ramesh and Shivraj Harsha in 2017

Last month, UPI recorded 5.4 Bn transactions, setting a record for the most transactions in a month, and recording a jump of almost 20% over February 2022. Within these transactions, UPI processed transactions worth an eye-watering INR 9.6 Tn, recording, again, a jump worth about 20% and setting new records.

While the digital payments ecosystem in India keeps on growing ever larger, not only just in terms of how many transactions it is processing or how much money it is shifting around but also in terms of the number of banks and NBFCs that are in the ecosystem.

Fintech companies had raised close to $8 Bn in 2021, while during the first quarter of 2022, the segment has seen $1.8 Bn in funding, third behind Enterprisetech and Ecommerce.

Security, therefore, is a relevant concern for the growing ecosystem, with frauds related to digital payments becoming faster and smarter with the advances in technology. The most common of these frauds are the ones related to credit, where companies are plagued with fake profiles that take out credit and then disappear, much to the dismay of these banks and NBFCs.

Here comes TrustCheckr, which, according to founder Adhip Ramesh, is “an insurance these banks and NBFCs can get into,” by helping them detect frauds as early as onboarding, thereby saving them lots of time and money.

TrustCheckr has completed more than 10 Mn TrustChecks to date across more than seven clients, such as Snapmint, while they are conducting trials with Bajaj Allianz for the same. In all, the startup has a robust pipeline of more than 50 clients.

Founded in 2017 by Adhip and Shivraj Harsha, TrustCheckr recently raised INR 6 Cr in Pre-Series A funding round, led by IIFL Securities, who is also its client. Existing investor Rangsons (NR Group) also participated in the round. 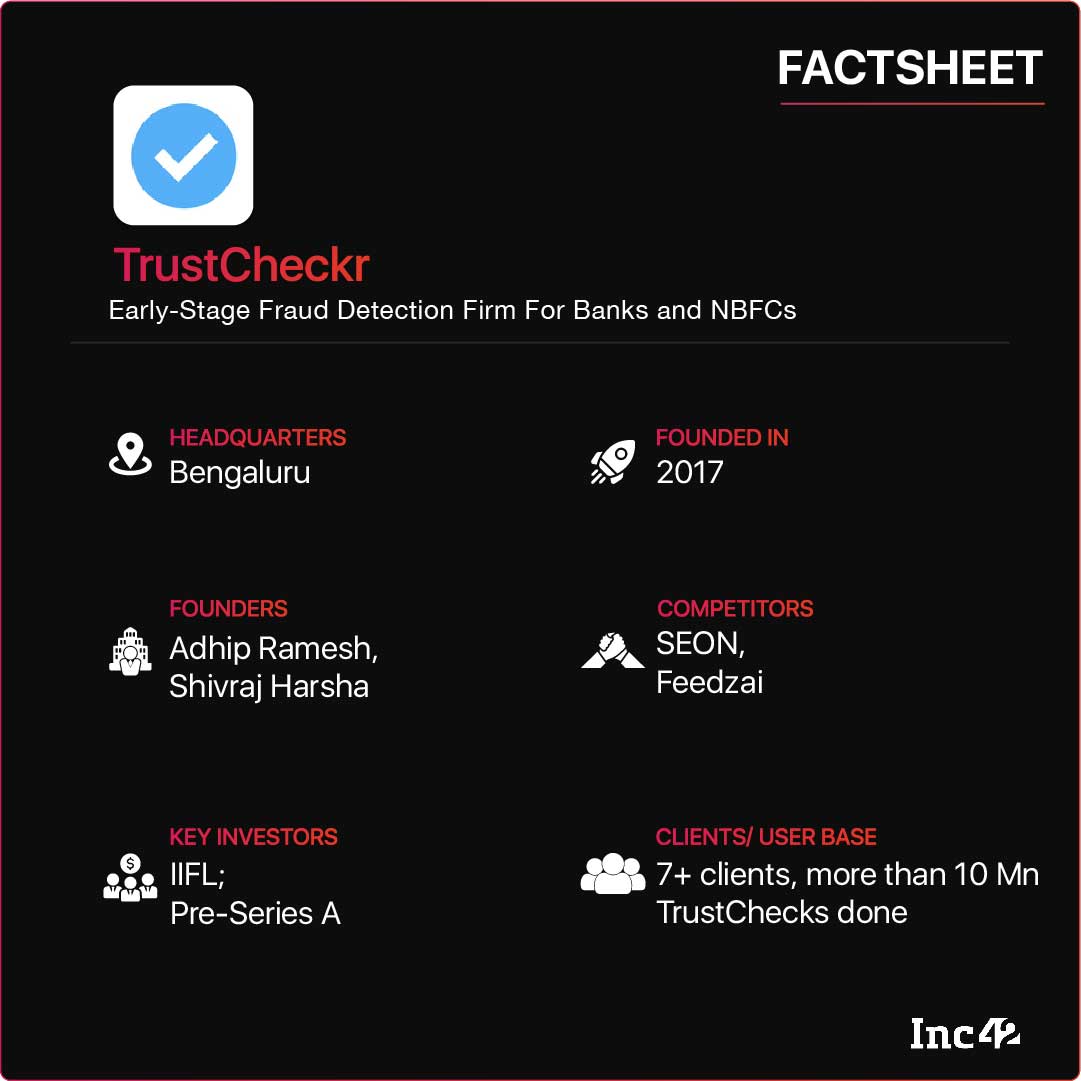 With the incoming funds, Adhip told us that TrustCheckr will look to invest in more tech resources, citing a long product development roadmap, and hiring more people in tech, along with a couple of data scientists. A part of the fund will also go towards business expansion for TrustCheckr.

We sat down with Adhip and Shivraj to understand what they have been doing since TrustCheckr’s inception, what technologies they have developed, and what the future holds for TrustCheckr and the digital payments ecosystem of India.

With the newly-minted startup, Adhip and Shivraj are targeting big.

“We really want to be on every single bank [and] NBFC so that we can actually help them [detect] traditional frauds,” Adhip said, noting that at the end of the day, TrustCheckr’s solutions can help banks and NBFCs detect fraud at the onboarding stage, which will help them close off any threats at the first stage itself.

Adhip added, “So, TrustCheckr is like an insurance any fintech can actually get into, and stop all the ongoing frauds which are happening [and] which will be happening on their systems.”

Coming in at one of the earlier stages is really key for both TrustCheckr and the banks and NBFCs that are using their systems.

Not only does this relieve the pressure on recovery teams that have to chase after fake profiles, but also with the help of TrustCheckr, the banks/NBFCs can reduce their non-performing accounts (NPAs) if the majority of them are not being made in the first place.

What’s more, whenever an account is made, it is immediately costing money to the financial institution with whom the account is made, be it from credit underwriting, issuing the credit itself, or following up with the customers. TrustCheckr has laid a solid claim to help these businesses avoid that.

Adhip added how financial inclusion effectively impacts the nation’s GDP, as more and more people are coming online with more and more money to spend, and this, in turn, brings up more and more fraudsters.

In all, the startup’s aim is to come in early in the process of onboarding and come in to clip the ‘wings’ that these fraudsters have in India’s fast-growing digital economy.

“So basically, we want to be a de facto fraud preemption tool in India,” Shivraj told us. He also notified that the starting aim for the startup is to get scale via partnering with two to three big clients.

TrustCheckr is also in talks with marquee names to raise $8-10 Mn in a Series A funding round to achieve the scale it needs to get to as fast as possible, within the next 12-15 months.

The two founders took some time to explain how these frauds happen, and what TrustCheckr does to prevent the said frauds.

“The existing framework all the companies are using is mainly bureau centric framework,” Shivraj explained, noting that there is the AADHAR-centric framework in place as well for confirming a person’s digital identity.

Shivraj went on to explain the basic onboarding process that NBFCs follow, which is to use the mobile number and email address to confirm the identity of a person. However, he said that the system was really not resilient against even the simplest of frauds, and their two-factor authentication can be easily skirted around.

“And you might be thinking there is two-factor authentication. How does that even matter?” Shivraj questioned, explaining that if a person wants to, they can submit their own KYC documents while submitting the contact details of a nonexistent person.

“What happens in a company’s system is this is a genuine customer, a genuine verified customer that you have onboarded, oblivious to the fact that the email ID and the phone number don’t belong to the person whom you claim to be,” he summarised.

By the time the companies realise that when the first calls for recovery bounce, it is too late, according to the cofounder.

“That’s when they wake up and realize that the first line of communication or the defence itself is shattered,” Shivraj noted. To prevent that, the startup has developed a line of products.

According to Adhip and Shivraj, these APIs are easy to plug into a bank or an NBFC’s platform and will allow them to detect fraud from all the four major bases of visual identities in the digital world.

“We are adding newer APIs to help them control fraud at a 360-degree level,” Adhip noted, stating that securing how digital identities are established is key to the success of any digital payments infrastructure.

Along with that, the startup is also coming up with an alerts system for banks and NBFCs. Called the TrustCheckr Alerts, the startup’s APIs will notify the onboarding teams working at the partner banks/NBFCs about any suspicious activity that they detect during the onboarding process.

The startup, in short, is working on ways to consolidate a person’s digital identity, and help banks and NBFCs avoid getting scammed by making sure that the people they are onboarding are the right people.

The most interesting product that we saw was the Phone Risk Scoring Module, which gives each phone number in a bank/NBFCs’ database a unique score, from 0 to 100. What’s more, Adhip has put his own mobile number on the TrustCheckr website, reflecting his Trust Score to be at 84.15.

If a visual identity has a TrustCheck score of below 40, that is deemed a fraudulent one and the system alerts the bank/NBFC. A score between 40 and 50 means that the digital identity looks similar to fraudulent identities from the historical data, and the lender needs to proceed with caution. A score above 50 is deemed safe.

The startup uses a dataset of about 1.5 Cr digital identities to refer to. However, Adhip confirmed that any bank or NBFC can use the Phone Risk API to give each of the digital identities in its own database a TrustCheckr score, and also use the same via its application form to attach a score to future identities.

“You’ll immediately get to know the TrustCheckr score in less than 2 seconds,” Adhip said.

What’s more, it also takes a look at multiple parameters such as the region, the carrier, and so on, to detect similar fraudsters and issue a warning to the onboarding teams at banks and NBFCs.

The solution is what TrustCheckr is banking on right now, and is in talks with not only financial companies, but with credit bureaus as well, in order to help them become the de-facto fraud preemption solution in India.

The startup is picking up steam at a time when lending tech is the fastest-growing sub sector in India’s fintech scene.  The sub sector will account for 47% ($616 Bn) of the total fintech market opportunity of $1.3 Tn by 2025, per Inc42 reports. While the market entry is sure opportune, TrustCheckr looks on the fast track to achieving the goal it has set out for.

According to the cofounders, the funding round was a Pre-Series A round, instead of a pre-seed round. The same has been corrected.