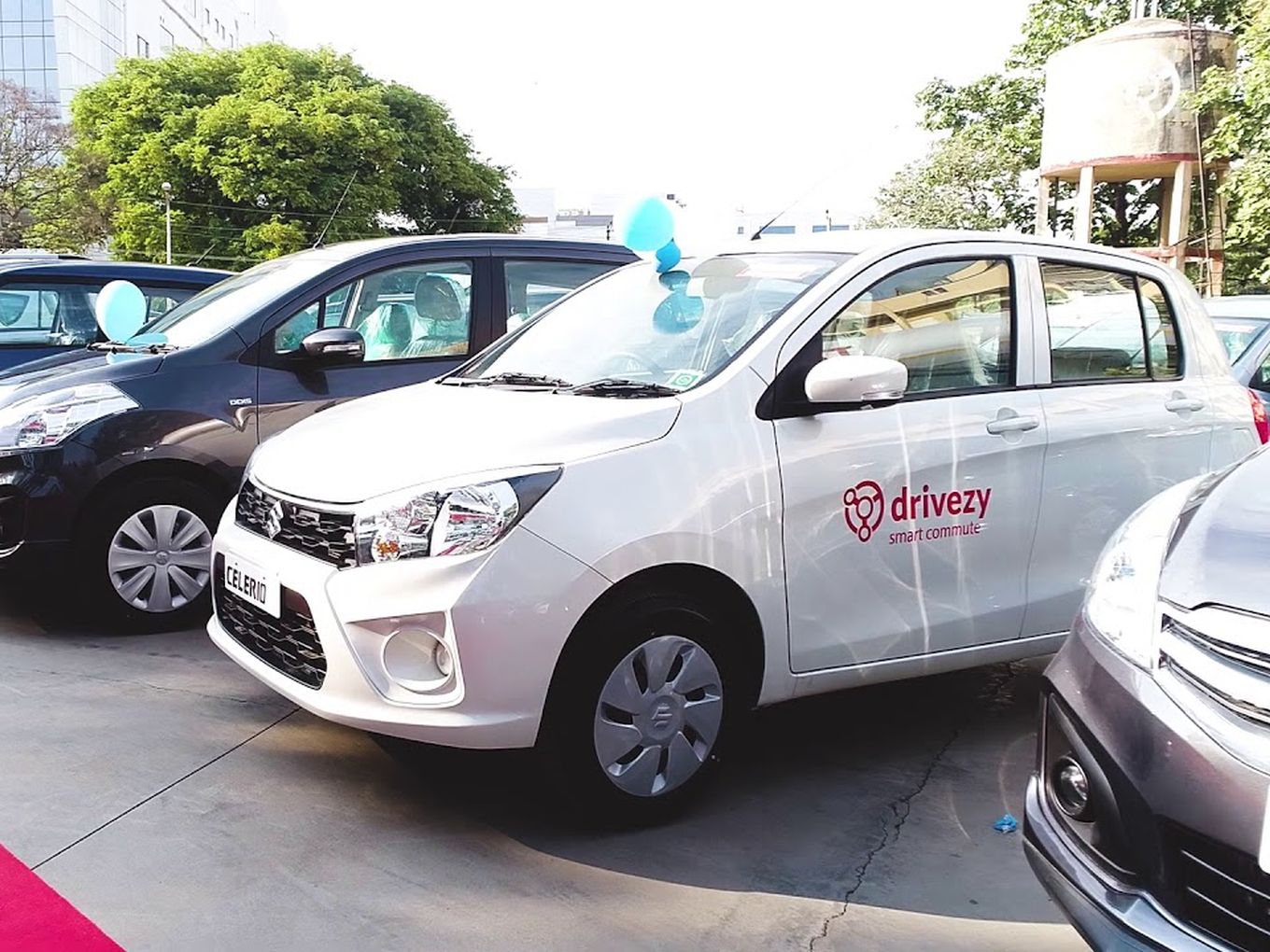 The process of buying a car, although painstaking, has a sweet reward at the end. The child-like anticipation that builds up as one waits to take delivery of their new car can only be matched by the thrill of long drives with friends and family. That joy makes all the research and planning before purchasing a car worth it. And that’s probably why in the minds of customers, the car rental market is drab and uninnovative.

Unfortunately, this euphoria was ephemeral for entrepreneur Ashwarya Singh and his two flatmates who bought a car by pooling in their savings and securing a vehicle loan.  Just under a month of purchasing it, their brand new car met with a terrible accident and was damaged beyond repair. To make matters worse, the insurance company declined to cover the damages as the other party did not have valid vehicle insurance. That’s when a sad reality dawned on them; although the car was gone, they would have to continue paying the EMI for the next three years.

As they contemplated their plight, they also realised that none of them actually used the car extensively and it mostly stayed in the parking spot. Plus the struggles of owning and maintaining a car in a city like Mumbai far exceeded its utility quotient.

That’s when Singh began mulling the idea of ways in which Indians could use a car without owning it. He believed that India had the right conditions to create a thriving car rental market, and began working on a venture that would offer customers the joy of owning a car, without all the fuss involved. He quickly roped in his college friends Hemant Kumar Sah, Amit Sahu, and Vasant Verma to launch JustRide.

It took a year of careful deliberation before JustRide took off in Powai, Mumbai. Shortly after, the team brought in Abhishek Mahajan, who was working with PwC India, as a cofounder. To begin with, they leased a fleet of 8 cars from a company in Delhi. Then in 2017, the company rebranded to Drivezy and pivoted from being an aggregator to peer-to-peer car and bike sharing marketplace.

The A To Z Of Drivezy

Founded in August 2015, Drivezy offers a platform that caters to customers at both ends of the spectrum i.e. vehicle owners and ride-seekers. Ride-seekers can rent cars, motorcycles and scooters on a self-drive basis. The owners list their vehicles on Drivezy’s platform and customers can select the vehicle and a suitable rental plan as per their need.

From owners, Drivezy micro-leases vehicles and rents them to seekers, thereby helping owners earn some money. This platform is called JustConnect and owners can track their earnings and expenses in real-time using the JustConnect app. However, as per the lease agreement, owners must list their cars with JustConnect for a minimum of 3 years.

While it started with four-wheeler rentals, sensing the rising demand for two-wheelers from its customers, in 2017, Drivezy added motorcycles and scooters as well. According to Singh, this proved to be a positive move for the company as the service witnessed an immense surge in demand.

Drivezy has also launched weekly and monthly subscription plans to meet this demand and retain customers. This service has gained popularity among students, young professionals, and delivery executives, Singh said. In Hyderabad, drivers of bike-taxi platforms like Ola and Rapido are renting two-wheelers from Drivezy’s platform and using them as a means to earn money.

To open up micromobility revenue, Drivezy piloted a ‘last-mile’ rental service in collaboration with Hyderabad Metro Rail Limited, wherein it rents out bikes to metro passengers on a pay-by-the-minute basis. It plans to launch a similar service in Nagpur, with a fleet of electric vehicles exclusively.

In addition to individual owners, the company has collaborated with automobile dealerships to list unsold inventory. The company has also partnered with more than 25 banks and NBFCs to offer car loans to those who wish to purchase new cars and list them with Drivezy.

To ensure passenger safety and security of vehicles, Drivezy limits speeds of its vehicles to 80 kmph. With on-board diagnostics, GPS trackers, and engine immobilizers, the company can remotely kill vehicle ignition in the event of a theft. Drivezy’s vehicles also come with bumper-to-bumper zero depreciation insurance cover, to cover expenses incurred from accidents or collisions.

As with almost all young startups, Drivezy too had to face its fair share of obstacles during its initial days. In the early days, the company could not afford third-party roadside assistance and in the event of an accident, the cofounders would retrieve the vehicles and handle the paperwork themselves.

The early loss of two cars due to accidents impacted the young startup dearly. In order to make up for the losses and keep the company afloat until seed funding, Drivezy started a chauffeur-driven car rental service for the next six months. “Since we had a fleet of luxury cars, the margins were quite high. This pilot helped us stay afloat for quite some time,” said Singh.

Today, to ensure timely servicing and regular maintenance of all listed vehicles, Drivezy has established a network of multi-brand service centres.

The car rental space is growing in India at a much faster pace than many thought, and one of the biggest factors has been the changing consumer behaviour when it comes to mobility and vehicle ownership. With the rise of ride-hailing services such as Ola and Uber, consumers are gravitating towards taxis for mobility rather than private cars.

Coupled with the fact that vehicle ownership is falling, it’s no surprise that car rental is a hot sector in India. On a year-on-year basis, the overall passenger vehicle sales declined by 17% to 2,45,599 units in April 2019 compared to 2,96,369 units in April 2018, according to a report by the Society of Indian Automobile Manufacturers (SIAM).

Plus there’s uncertainty in the automotive market with the emergence of electric vehicles, with its allied government incentives. Given this situation, it’s not surprising that the car rental market is growing faster than ever before.

“There is no doubt that vehicle sharing has a massive market in India. The sector is growing geometrically each year and for this reason, competition is constantly growing,” Singh said.

According to a report by Ken Research, the Indian car rental market is projected to touch $12.5 Bn by 2019, growing at a CAGR of 35%. This could be attributed to reasons such as a spike in long-distant road-trips, new technology for car rental players, increasing fleet sizes, deeper geographical penetration and entry of new players.

According to Singh, the fact that Drivezy is the only platform that features both bikes and cars is one of the major differentiators. He also claimed that the company’s asset-light business model and extensive supply chain helps them stay ahead of the competition.

Subscription-based ownership is a fast-catching trend in India and might change the car-ownership landscape in the country further. According to a Technavio report, the global automotive subscription services market size will grow by $1,737 Mn during till 2022. Even automobile manufacturers have noticed this shift in consumer-buying behaviour and have geared up for it. Indian automotive giant Mahindra & Mahindra has entered the vehicle leasing segment by partnering with two vehicle-leasing companies, Orix and ALD Automotive.

According to reports, even Ola is exploring a subscription-based model for its self-drive or car rental offering. Inc42 had reported that Ola is planning to launch the service in seven cities by deploying over 10,000 vehicles including luxury sedans and SUVs under the ‘Ola Self-Drive’ category.

“As vehicle sharing services diversify further, we shall witness the rise of sophisticated transportation systems that will change the way we buy, use and sell automobiles. I am glad that Drivezy is playing an active role in this paradigm shift.” – Ashwarya Singh, Drivezy cofounder

Leading this shift is Drivezy’s community of 5K owners, fleet operators and vehicle dealerships. The company has witnessed most traction in Bengaluru, followed by Hyderabad and Pune. Drivezy claims to have a customer base of about 1.5 million registered users and with around 93% of them coming from the 18-35 age bracket. The company claims to have processed over 4 lakh bookings, and has 500 employees in 11 cities.

The growth of Drivezy can be attributed to its steady revenue stream and the funds raised. The company earns a 15-30% commission for every successful transaction. Last year, it clocked a GMV (Gross Merchandising Value) of $32 Mn, growing by 200% since 2017. It’s targeting a GMV of $80 Mn this year.

In terms of funding, the company has raised a total of $32 Mn in equity financing from investors including Das Capital, Axan Partners, IT-Farm, Yamaha Motor Ventures, and Y Combinator, among others.

Last year, Drivezy also secured $100 Mn in an asset financing deal with which the company plans to induct close to 50,000 vehicles. The company also raised $20 Mn in Series B equity funding, led by existing investor Das Capital. “Right now, we are raising $100 Mn as part of our Series C fundraise. We are also raising another $400 Mn in asset financing,” said Singh.

Last year, Drivezy was recognized as one of the 42 most innovative Indian startups of 2018 by Inc42’s 42Next list. It was one of three Indian startups selected by Y Combinator for its Summer 2016 batch. As part of this three-month program, the accelerator invested $120K in the startup for a 7% equity stake. In 2015, the startup was selected by Google for the Launchpad Accelerator programme.

Thanks to its revenue and funding history, Drivezy is in prime position to expand in India. It plans to expand its presence to 21 Indian cities and enlist close to 70K vehicles onto its platform. Besides its India plans, the company wants to launch in the US, starting with a fleet of 200 cars in San Francisco. It’s also planning expansion in Southeast Asia.

Drivezy is also planning to execute a few big partnerships with the ridesharing and budget hotel sectors. Talking about his company’s partnership endeavours this year, Singh said that it plans to collaborate with NBFCs (Non-Banking Financial Companies) in order to enlist their repossessed vehicles on Drivezy’s platform.

“Our industry is going through a riveting phase. Thanks to the meteoric rise of IoT and internet connectivity in Indian cities, we now have the means of fostering an urban commute infrastructure that is based on the principles of collaborative consumption.”