Everpix, SnapChat and the Startup Lie

Everpix, SnapChat and the Startup Lie 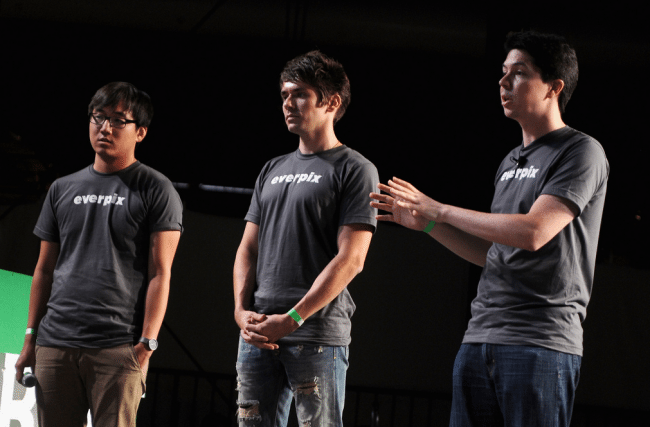 Making acquisitions the default goal for new software companies is nothing more than demoralizing.

At their core, Everpix and Snapchat are both well-designed, super-hyped software services centered around photography.

For the unfamiliar, Everpix is a freemium photo hosting service that has six employees and 6,800 paying users. Everpix recently announced that they’re shutting down in grand fashion, after running out of money. The final straw? Their inability to pay an estimated $35,000 monthly hosting bill from Amazon AWS.

Contrast that with Snapchat–the 20-plus employee, zero-revenue, temporary selfie app that secured a huge $60M round of funding in June, got swanky new office digs in Venice, and supposedly is in line to get even more money!

Why is a service that people actually pay for closing, while a zero-income company benefits from over-funding?

Everpix’s fatal flaw in the eyes of a VC

Well-known start-up blogger Andrew Chen had a few things to say about the Everpix postmortem, with this gem in particular catching my eye: Focusing on monetization too early can lead to a white flag, since it’ll mean the entrepreneur is thinking small rather than focusing on winning the market.

Those of you not living in start-up bizarro world are probably scratching your head at that one, but it explains the situation perfectly.

See, most venture capitalists swing for the fences, all the time. They don’t care about base hits, doubles, and (sometimes) home runs. They want the grand slam, the big idea, The Next Facebook.

Small profitable companies, particularly the ones that don’t show pump-and-dump potential, get shunned by VCs. They even use patronizing phrases to describe such operations, like “lifestyle businesses.”

Make money? No, don’t do that!

The phenomenon of revenue-generating companies being denied funding is nothing new. These quotes come from a 2012 New York Times article, which just as easily could have been written in 2001.

Yet an even more bizarre activity in the Valley than shushing the talk of a bubble is how some start-ups are advised by investors not to make money. This concept may sound ridiculous from a business standpoint, but for investors, it fuels the get-richer-quicker mentality that exists here.

When small start-ups I’ve spoken with do make money, they often find it difficult to recruit additional investment because most venture capitalists–and often the entrepreneurs they finance–are not interested in building viable long-term businesses. Rather, they’re interested in pumping up enough hype and valuation to find a quick exit through an acquisition at an eye-popping premium. This is exactly why Snapchat is flush with VC cash, while Everpix is paying out refunds to once happy customers.

However, I don’t buy into the idea that making money is why Everpix closed shop. Everpix failed by believing the misconception that they should be “the next big start-up.” The fact that we’re in 2013 and acquisition is still the default goal for new software companies is demoralizing. Everpix could still be running their product as a successful business, but it’s obvious that’s not what they wanted to do.

Based on what we know about Everpix’s subscriber count and payment plans, it appears they had the ability to make something in the range of $370,000/year.

If you look at the numbers from this article, you’ll see Everpix was splurging on personnel costs to the tune of over $4,934,691 $1.16M in two years. That’s some classic VC-backed overspending. This puts the average salary around $100k/year normal (some might even say lower) for the Bay Area.

I’m no math whiz, but I ran some “back of the napkin” numbers and it’s clear that Everpix would still be around if they had simply kept costs low until they became a success.

Here’s how it could have worked:

So essentially if Everpix were a paid only service, but they could have sustained themselves.

Getting a product off the ground takes sacrifice–I know because I’ve done it. Software developers in the start-up community are spoiled, especially in the Bay Area. This notion of having your cake (huge salary) and eating it too (large equity stakes) right from the start is insane. By simply paying themselves $50-60K/year, they could have gotten by and built a sustainable business in the process.

Before you jump in the comments and cry about poverty levels in San Francisco and the cost of living, please just stop. There are multiple ways around this like remote hiring, consulting on the side, being based in other locations, and so on. Again, I’ve done it and I live in the same region.

GO TO A PREMIUM-ONLY MODEL

Everpix should have dropped all its free users and become a premium-only service.

Doing so would have reduced their monthly AWS bill from $35,000 to around $4,300–and in my experience, switching from a freemium to a paid-only model works beautifully.

It bears repeating that what made Everpix fail was the belief that they should be The Next Facebook (or even Instagram).

Photo storage and sharing is a huge business and it’s big enough for many players to succeed. It’s been estimated that Flickr is making around $50M/year from a combination of paying customers and advertising. Armed with this knowledge, why not aim for the $50M/year mark instead of getting acquired and cashing out early?

The Everpix team built a great product. Attracting 6,800 paying customers in two years is no small feat, so kudos to them. I wish them well with whatever challenges they take on next.

As someone who’s struggled with my own start-up failures, I know exactly how it feels to be in their shoes and it’s a bummer.

If you’re an engineer readying a product launch, I urge you to focus on creating a sustainable business, instead of buying into the belief that acquisition paydays and venture capital are the best way to operate.