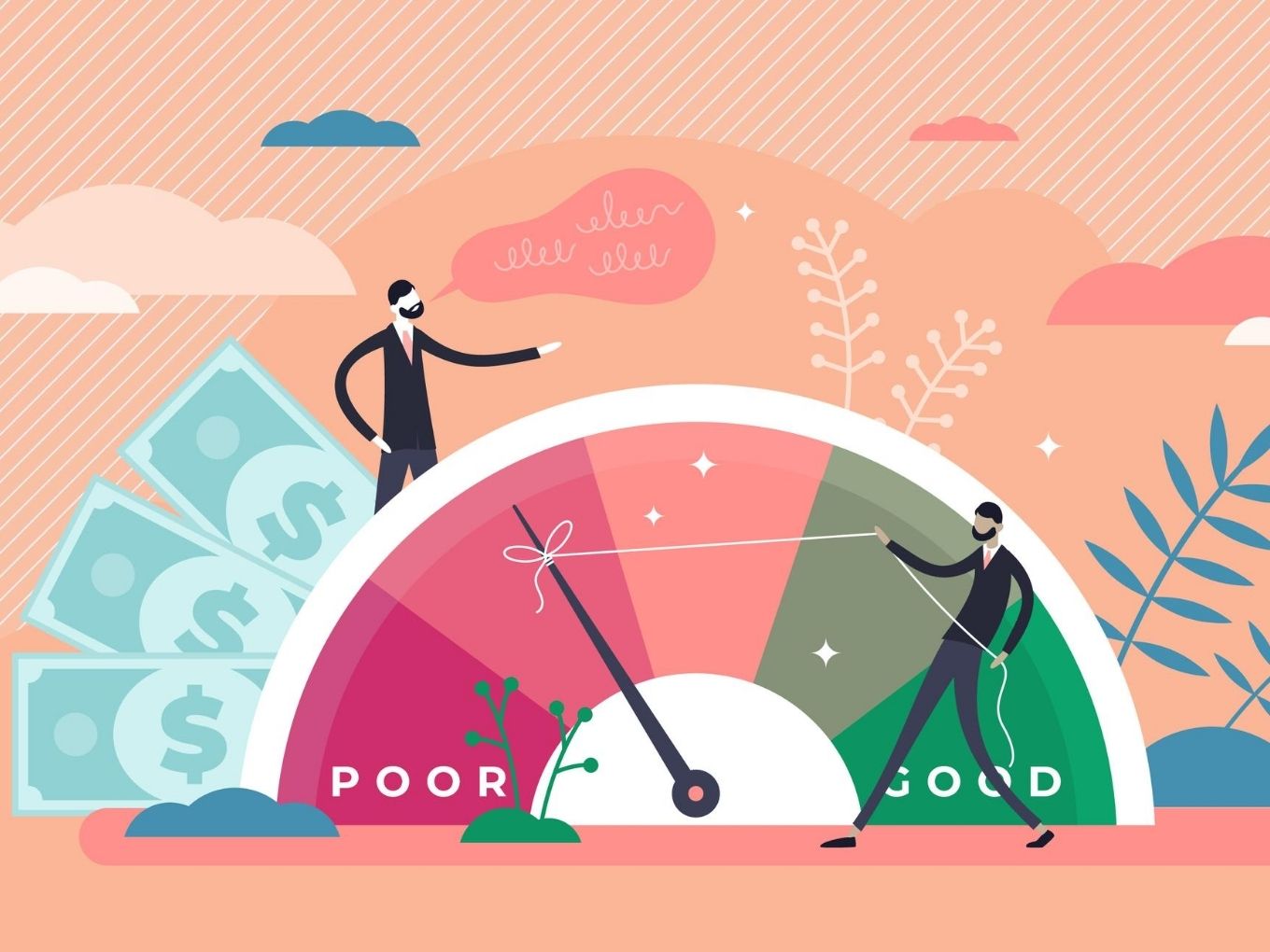 When Freakonomist author Steven Levitt’s father began his career as a medical researcher, his boss, a supposedly renowned doctor in medical research, told him he didn’t have what it takes to be in the field. He reportedly advised Levitt Sr to focus on something nobody else was – intestinal gas. Steve’s father did just that and became the world’s foremost expert on the matter.

Sometimes, the biggest possibilities are in solving problems that aren’t in vogue. And that’s something that startup founders and entrepreneurs have to embrace even when solving in the modern day and age. In fintech, for instance, every second player is either looking at lending or frontending loan disbursals through NBFC feeders. Very few are focussing further downstream on collections and recoveries of loans, which is one of the most complicated problems of the financial sector in India.

It’s a problem that fintech startup Credgenics wants to solve by making it easier for lenders to track the status of repayments and track collections through automated processes. Founded in 2018 by Rishabh Goel, Anand Agrawal and Mayank Khera, the loan recovery management SaaS platform is backed by use of sophisticated technology and a network consisting of independent empanelled neutrals who specialise in dispute resolution techniques to assist the lenders independently in mediation techniques/amicable settlement and all efforts are made to settle disputes amicably between borrowers and lenders by extensive use of technology.

How Credgenics Is Solving The NPA Puzzle 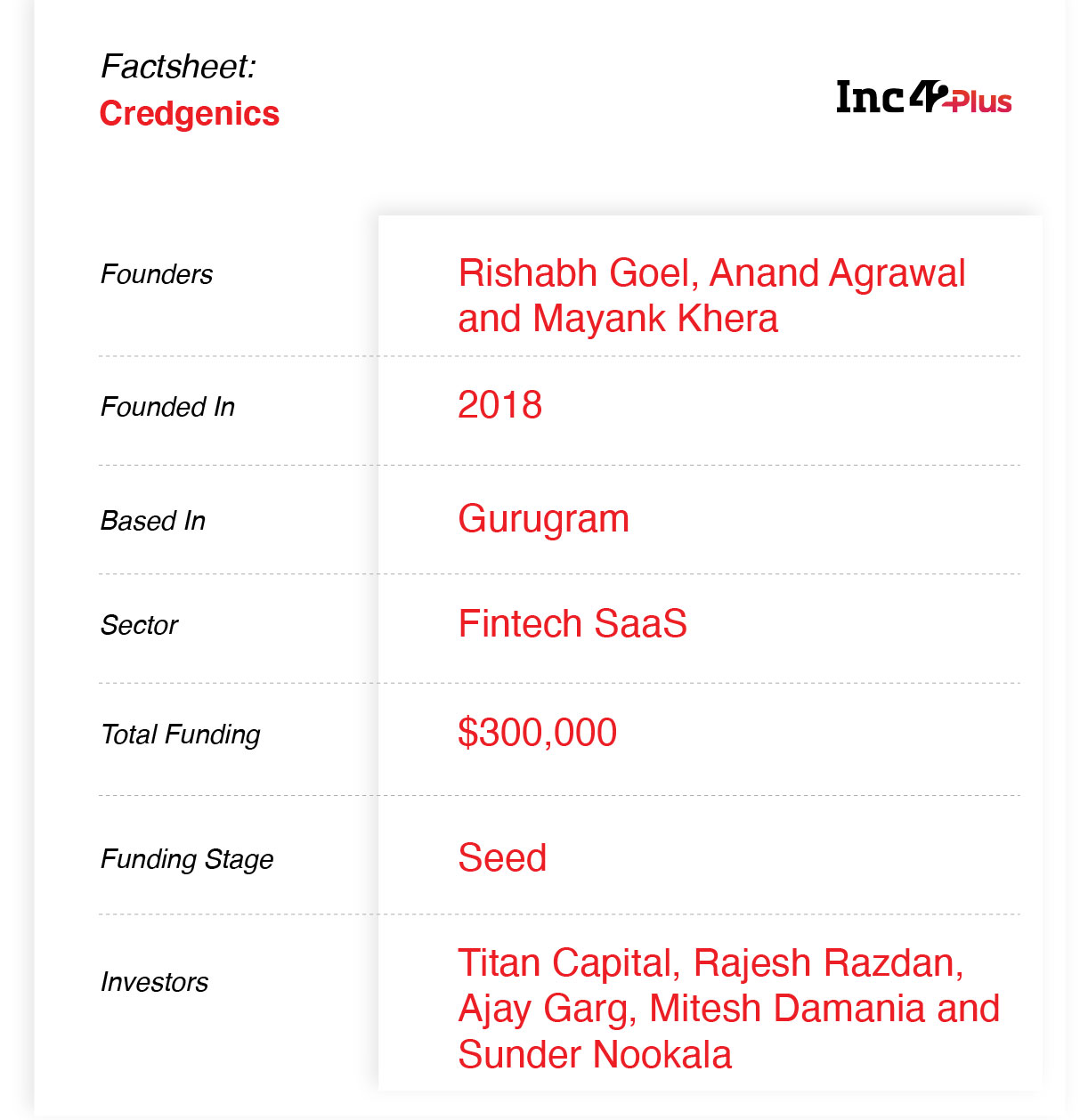 While non-performing assets (NPA) levels have kept on increasing over the years — government figures estimated the gross national NPA volume at over INR 10 Lakh Cr in 2018 — the rate of recovery through various channels has fallen over the years — it dropped from 22% in 2012-13 to 15.5% in 2018-19. Even through the ongoing pandemic, collections have been a big focus, but sometimes lenders have overstepped the line and gone with highly aggressive tactics that not only border on unethical but can be quite unhealthy for the sector as a whole.

Credgenics began by offering loan resolution services to NBFCs and small lending startups with its panel of lawyers. Over the first year, it created a large data set to be able to predict borrower behaviour. Cofounder Rishabh Goel, who is also the CEO of the company, told Inc42, “For example if a loan goes bad, it is passed on to a calling team where they reach out to the borrowers to understand what’s the reason for the default, and it’s a kind of a standard script which they are using. The entire activity is happening in silos without application of a framework or data.”

The startup claims to streamline the entire gamut of collections processes right from the instance of default till conclusion via different communication channels and modules. The startup offers various modules in its software solutions including communications module, automated collections module, notices and case tracking module, case reminder features, on field app etc.

The SaaS platform, which is a subscription-based offering for lenders, can be used to monitor borrower behaviour and shoot communication such as mails and text messages when a borrower defaults on their payments. It also uses artificial intelligence and machine learning to gauge the probability of a borrower paying up and as such helps lenders adopt an appropriate strategy to recover the loan.

If a loan enters the default phase, the borrower’s account gets automatically uploaded to the Credgenics platform from the lender’s loan management system. Over the next 90 days, when the loan is still not considered a NPA, the platform’s artificial intelligence and machine learning model decides at each stage the strategy that has to be adopted for recovery based on 22 parameters including age, geography, repayment history of the borrower and more.

Credgenics uses various communication channels and acts as a facilitator for financial institutions to connect with borrowers and assist lenders in digitalization of all of their collection processes, providing the parties with the digital infrastructure for amicable settlement of disputes, creating transparency for all the parties, streamlining the involved processes, improvising borrower experience with lenders and expediting the whole resolution process.

Goel highlighted this with an example, “Suppose an account has 20% probability of payback and another has a 80% chance of recovery. With this data, I can allocate the resources to first recover the 80% probability case rather than go after the entire loan book with the same strategy. With the 20% case, I know that I would have to be stricter on the legal side. And I have to be very cautious in reaching out to them.” When a loan enters the NPA stage — 90 days past repayment due date— Credgenics’ network of over 2,000 lawyers comes in.

“Loan restructuring is being done with the help of lawyers as of now but we are building this training data set to enable the AI engine to suggest restructuring on the basis of customer paying behaviour and his response,” Goel added.

Cleaning Up The Recovery Game

Lenders such as banks, NBFCs and digital lending startups reportedly ramped up their aggressive loan collection strategies by abusing and threatening borrowers even as the onset of the Covid-19 pandemic hit their recoveries and the RBI placed a moratorium on EMI payments.

With collections slowing down among startups, banks, non-banking financial companies (NBFC), the flow of credit is expected to take a major hit. Even as some tech-enabled lending startups claim to have high collection ratios, in many cases, borrowers are using the temporary relief provided by the Reserve Bank’s moratorium on term loan repayments.

Lending startups have been accused of harassing customers unable to repay their EMIs for unsecured loans which are not covered by the moratorium. From being harangued on phone calls to messages sent to contacts, digital lending customers have alleged that such bullying is rampant as companies look to get their dues.

Goel said Credgenics is offering an alternative. “Our value proposition for banks has become clearer in the Covid times when they saw that there has to be an upgradation in tech infrastructure to handle bulk collections and after the RBI came out with guidelines saying borrowers shouldn’t be coerced into repayments.”

Credgenics claims to be working with NBFC and fintech clients such as Loantap, Loansimple, Rupeeredee, Cashkumar and Drip Capital. In mainstream lending, it claims to have banks such as Kotak Mahindra Bank and ICICI Bank as customers, while talks are also on with HDFC and IDFC FIRST Bank.

Goel claims the company is managing more than INR 100 Cr in loans, but the size of loans disbursed is a secondary focus. “We have three key performance indicators — resolution rates, time of resolution and cost of collections,” Goel clarified.

The CEO further said that clients saw resolution rates of loans improve by 8%-10% across customer segments in the pre-NPA stage after using Credgenics. Recoveries have gone from 780 out of 1,000 cases to 890 out of 1,000 cases for its clients. He also claimed Credgenics clients saw a 20-30% cost reduction for recoveries in the NPA category. However, Goel declined to share specific numbers related to clients.

Credgenics earns from its SaaS based monetisation model. For its collections platform, the minimum base fee ranges from INR 50K to INR 3 Lakh. On top of that, there’s also a per-use transaction fee, which is charged for sending emails, SMSes and dunning letters.and notices. The cost for a lender works out to be $2-3 per borrower account generally, says Goel.

Next is the revenue stream from the collections. Credgenics charges for collections as a service through advanced technology ranges between of 5%-40% on loan recoveries made from NPA resolutions — with a median of 30%-35% of the amount.

Currently, up to 80% of Credgenics’ revenue comes from the subscription fee for its SaaS platform, while collections only account for 20%. However, this diversification is crucial since it allows the company to target revenue at two different stages of resolution and maximise the value-addition to the lenders.

Credgenics has picked up seed funding of $300,000 in a round led by Titan Capital that also saw participation of Rajesh Razdan, founder and CEO, mCarbon (acquired by Nuance), Ajay Garg, MD, Equirus Capital, Mitesh Damania, founder and director, Kwench and Sunder Nookala, founder and CEO, Kwench.

While a host of collection-related solutions have emerged for various niche areas such as PayJoy and Datacultr, for Credgenics, the primary competition is CreditMate which is also a fully-featured collections platform with machine learning enabling collection strategies and automation of processes. As of December 2019, the Mumbai based loan recovery startup, which was launched in 2016, claimed to have $150 Mn in assets under management and has raised $10.5 Mn in funding.

Goel believes that while Creditmate is a marketplace of collection agencies, Credgenics has an edge. “[We are] end-to-end intelligent data-driven platform which covers all the stages of delinquency right from predicting it until conclusion [stage].”

Parts of the story related to Credgenics’ panel of lawyers, use of AI,  mode of recoveries and competition were edited.