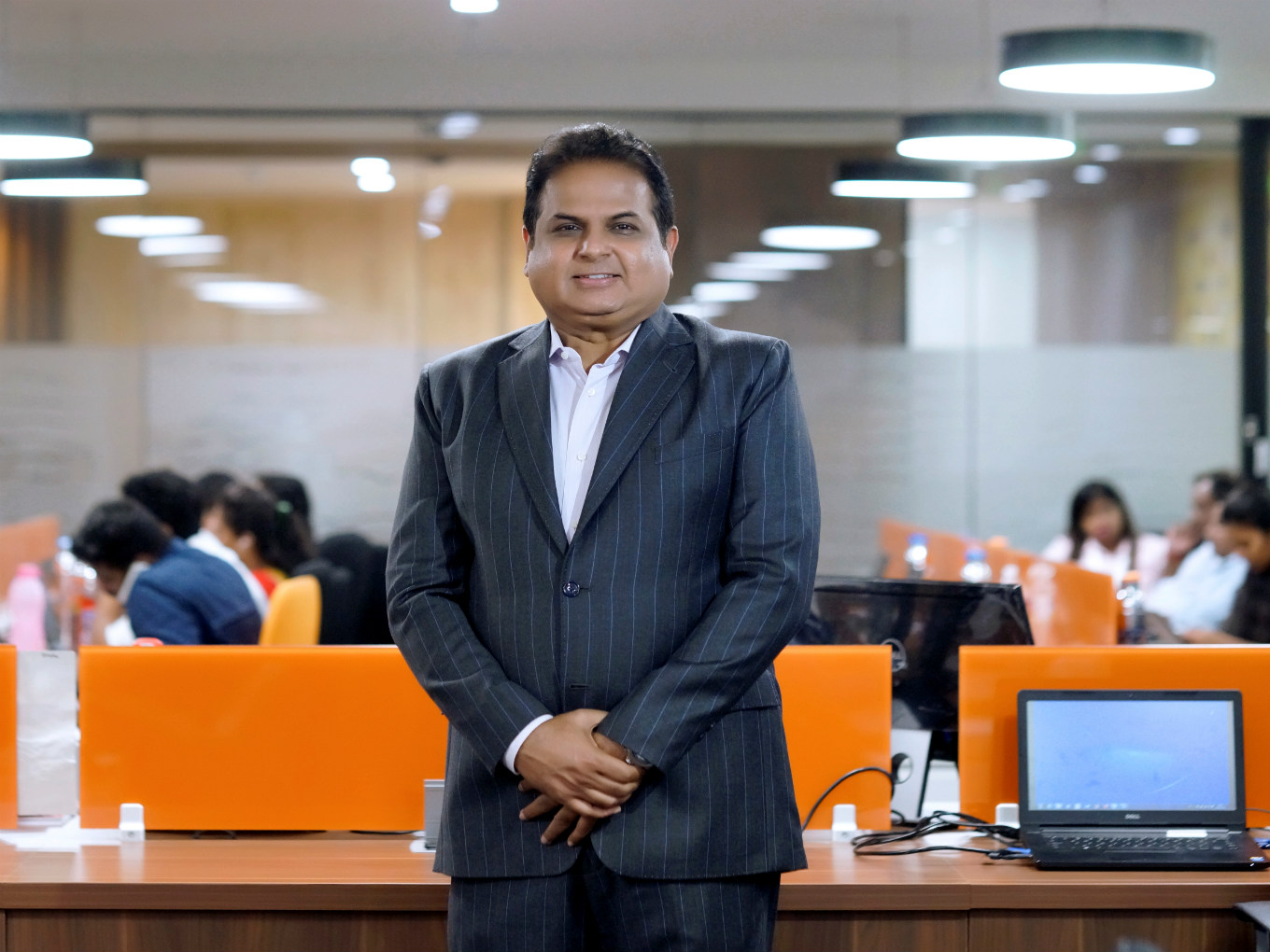 The startup aims to cross the INR 1,000 Cr in loans and 5 Mn app downloads this year

“I am the kind of guy who likes to keep his wallet heavy,
It’s like the ATMs and I, are expecting a baby,
Every day I whip, stick it, swipe it, punch it till she’s done,
I know that coz she screamed, “Insufficient funds”
It’s the end of the month!”

These lyrics from Indian stand-up comedian Abish Mathew’s song called ‘End Of The Month’ typify the plight of most young salaried professionals in the country. They can relate to this song, having, at some point in their lives, faced the trepidation of coming across the two dreaded words — insufficient funds — on ATM screens.

The end-of-the-month frugality that ensues can be brutal. A major unexpected expense during this period can prove to be really harrowing. The mere thought of the hassles involved in getting a loan means they cannot even consider it as an option. It’s particularly tough for young professionals fresh out of college, as they don’t have any credit history, which is a key criterion for securing loans.

Tech entrepreneur, and private equity investor Raman Kumar was perceptive enough to recognise this quandary and his venture CASHe is an attempt to solve this problem for the young professionals and working students in India.

Lending Moves To The Hashtag Era

Launched in April 2016, CASHe is an alternative lending platform delivered through an app. It provides unsecured short-term personal loans to young employed professionals based on their social profile, merit, and earning potential. The startup assesses applicants through a proprietary AI-based credit-scoring platform called the Social Loan Quotient (SLQ) which determines creditworthiness by using multiple unique data points based on social and mobile data footprints. On the basis of these parameters, each applicant gets a credit profile.

Kumar began his entrepreneurial journey with CBay Systems (also known as MModal) in 1998. The voice-recognition and healthtech company was sold to One Equity Partners for $1.1 Bn in 2012. Kumar then founded Aeries Technology Group, which offers artificial intelligence (AI), blockchain, and ERP solutions to enterprise clients.

While not a non-banking finance company (NBFC) itself, the CASHe app is powered by RBI-registered NBFC Bhanix Finance and Investment Limited, Kumar told Inc42.

Traditionally, for loan approvals, banks screen applicants using a credit information report (CIR) and use CIBIL scores to determine creditworthiness. Ranging between 300-900, the CIBIL score is a three-digit numeric summary of one’s credit history found in the CIBIL Report. The CIR, generated by a credit bureau, is a month-on-month record of all EMI and/or credit card payments from various accounts.

However, it does not contain details pertaining to savings, investments, or fixed deposits. TransUnion CIBIL Limited, Equifax, Experian, and Highmark are the four credit bureaus operating in India, with TransUnion CIBIL being the most popular one.

Scores above 700 are generally considered good, thereby indicating that the applicant has a healthy credit history. However, many lending startups don’t rely on CIBIL scores as they are targetting a market which may not have a good credit history if any at all. CASHe too follows the same model and relies on the SLQ rating to approve loans. The major differentiation for CASHe is that it uses social media data, which other lending startups may not always look at.

The Mad Dash For Digital Cash

It’s no surprise that NBFCs and credit companies are lining up to bring lending products to India. According to a recent Boston Consulting Group report, the four key factors that are driving the exponential growth in digital lending in India include — increasingly digital-savvy consumers, big data, a more enabling regulatory environment, and innovation in terms of models adopted by fintech players.

Over the next five years, digital lending in India is set to become a $1 Tn market. The total funding in digital lending startups between 2014-2018 has been $1.58 Bn across 138 deals, according to Inc42 DataLabs. This growth is spurred on by the increasing penetration of lending services to rural users in India.

CASHe is not the only unconventional lending startup in the market. Many others have achieved similar or more impressive growth especially as India’s lending landscape has been totally transformed by digital lending. Startups which have an early lead in the race include Pune-based EarlySalary, LendingKart, Mumbai startup PaySense, and Bengaluru-based LoanTap and MoneyTap. MobiKwik has also entered the arena and is gathering momentum.

Today, lending startups need to differentiate themselves from the crowd. According to Kumar, the key distinction for CASHe is its automated credit rating mechanism, SLQ which helps the startup bring down the turnaround time for loan disbursal while keeping delinquencies low.

Technology and payment standards have been the key factors in bringing startups such as CASHe into the lending market, Kumar added. “Digital lending companies have now set up open architecture layers such as Aadhaar, UPI and Bharat Bill Payment Systems; which will go a long way in boosting digital and data-enabled lending.”

Talking about the funding history for CASHe, Kumar said, “I personally invested $5 Mn through my group companies and then raised $3.8 Mn in Series A from an investor group led by Mathew Cyriac, senior MD at Blackstone India. Besides this, we have raised debt from Kotak Bank and are actively engaged with other lender groups.”

In October 2017, CASHe raised about $3.07 Mn (INR 20 Cr) in debt funding from IFMR Capital in its NBFC company, Bhanix Finance and Investment.

Quite unlike a bank loan, the CASHe process begins when the user gives the company access to their social media accounts. They also have to fill in basic details about themselves, and upload documentation such as ID proofs, their salary slips, bank statement, and a selfie, using the app.

Once registered, the user’s maximum eligible loan amount and an SLQ score are generated. According to the company, once a loan is approved, the amount is credited within minutes. However, CASHe has set a limit of INR 19,500 for the loan transfers to Paytm account.

In order to be eligible for a loan from CASHe, the applicant has to earn at least INR 15K per month. The maximum loan sanctionable for a tenure of 15 days is set at 30% of the applicant’s net monthly salary; not exceeding INR 50K.

The minimum salary criterion leaves out a chunk of the young professionals market, who may also be using social media but do not earn up to Rs 15K per month or have a fluctuating income stream such as for those working in the gig economy, or for freelance workers.

A flat interest rate of 1.75 and 3.25% is charged for 15 and 30-day loans, respectively. CASHe allows prepayment of the loan, however, the company deducts the interest payments at the time of disbursement, and the same does not get reduced/reimbursed during prepayments.

Customers who default on their payments are sent reminders following which, the company involves its loan recovery team to initiate calls and follow up emails.

CASHe currently has a 138-member team spread across two operating centres in Mumbai and Hyderabad, ensure the company operates smoothly and efficiently.

“As this is a technology-led company with most of the underwriting done by our AI platform, we are not looking to spike our headcount drastically. However, we are looking to hire more resources to strengthen our technology team by recruiting resources for AI, data analytics and blockchain,” said Kumar. He added the company is looking to integrate distributed ledger and blockchain infrastructure into the lending platform to make it more transparent.

Since its inception, CASHe has disbursed a total of about 3 Lakh loans cumulatively to over 180K customers, amounting to about INR 875 Cr with an average daily disbursal of INR 2 Cr. For this fiscal year, it is aiming to cross the INR 1,000 Cr mark and 5 Mn app downloads from the current 2.2 Mn.

In the last financial year, CASHe disbursed about 85K loans worth INR 510 Cr, which is nearly 10X the INR 55 Cr it disbursed in 2016-17. On average, it receives over 1,000 loan requests in a given day, Kumar, adding that the ticket size ranging from INR 35K to INR 40K. While Kumar declined to share its revenue projections for FY 2019-20, he did say that CASHe is on track to turn “highly profitable” in this financial year.

It earns revenue via the interest rate on loans. To expand its portfolio, the company tied up with payments platform mSwipe to launch EMI cards that let customers repay for purchases via three monthly instalments. Besides, it also offers general insurance, life insurance, and credit improvement products.

Moreover, the segment is expected to witness huge growth in the coming years, especially with the greater digital and financial inclusion across India’s rural and urban audiences, which should make new startups feel confident about attracting new customers. There’s no telling which of these lending models will survive to weather the storm of tough competition in the years to come.