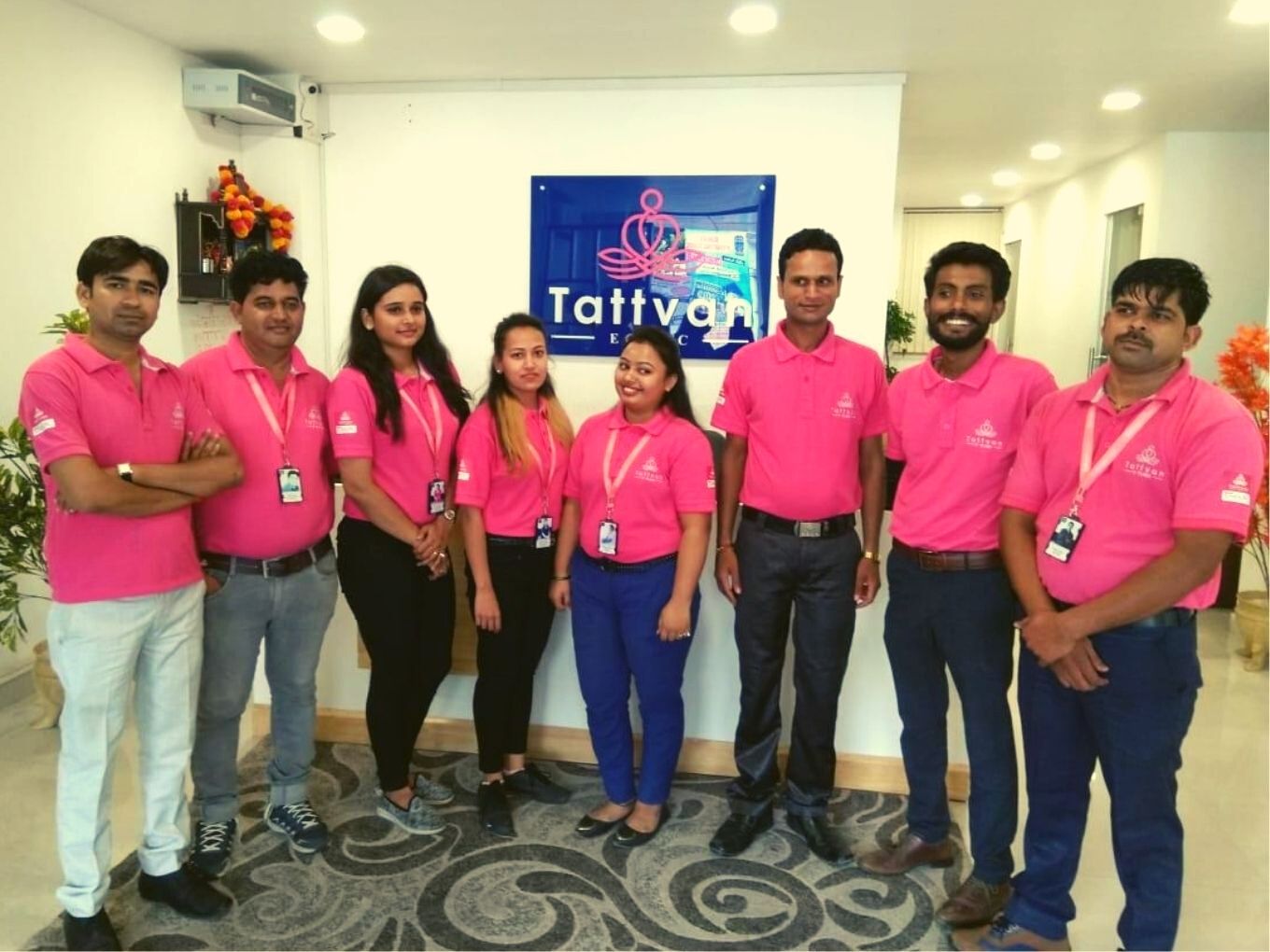 Tattvan witnessed an overall growth of 35-70% across its business verticals, and saw a 65% surge in telemedicine service

Tattvan has also started providing a holistic healthcare plan to the corporate clients with services like tele-consultations, diagnostics, second medical opinion and more

“The last four months have been the most crucial for not only us, but also for the entire digital healthcare and telemedicine,” said Ayush Mishra, cofounder and CEO, Tattvan E-Clinics.

India’s telemedicine landscape has witnessed a massive surge in recent months and the government’s announcement of the National Digital Health Mission is further expected to fuel the growth of the healthtech industry. But the problem of healthcare access cannot just be solved by technology and digitisation and it’s important to achieve deep penetration into rural markets and Tier 3/4/5 cities to reach the masses.

While the telemedicine is gaining popularity and essentially bridging the gap between doctors and patients, many industry experts believe that telemedicine as a sole business is not financially viable since advanced healthcare or specific treatments can only be provided in physical clinics or hospitals. However, looking at the demand in telemedicine across the country, many startups are burgeoning in the space, including Tattvan E Clinics, Portea, mFine, myUpchar, Practo and Lybrate among others, which are following a unique business models and strategies to stay ahead of the game.

Riding the telemedicine wave, Gurugram-based Tattvan E-Clinic told Inc42 that it has witnessed a massive jump in terms of associated hospitals and doctors, patient request and geographical presence and revenue, where the overall growth across the verticals has been anywhere between 35-70%. Tattvan has targetted not just Indians, but has been an active telemedicine provider in Afghanistan and other Middle East countries too, which have a sizable audience for medical tourism to India.

With more than 500 doctors and 15 clinics across various cities in India, including UP, Jharkhand, Uttarakhand, Lavasa, Pune and Hyderabad among others, Mishra told Inc42 that the company has been growing at 65% MoM in terms of users/patients, particularly in the teleconsultation space.

Tattvan attributes its recent growth to rising awareness in Tier 2 and Tier 3 cities, and says this segment continued to grow after the launch of ‘Swastha Samarth’, which focuses on supporting small-town doctors through their telemedicine application. This solves the real gap of access with over 300 doctors providing medical consultations to patients in small towns. 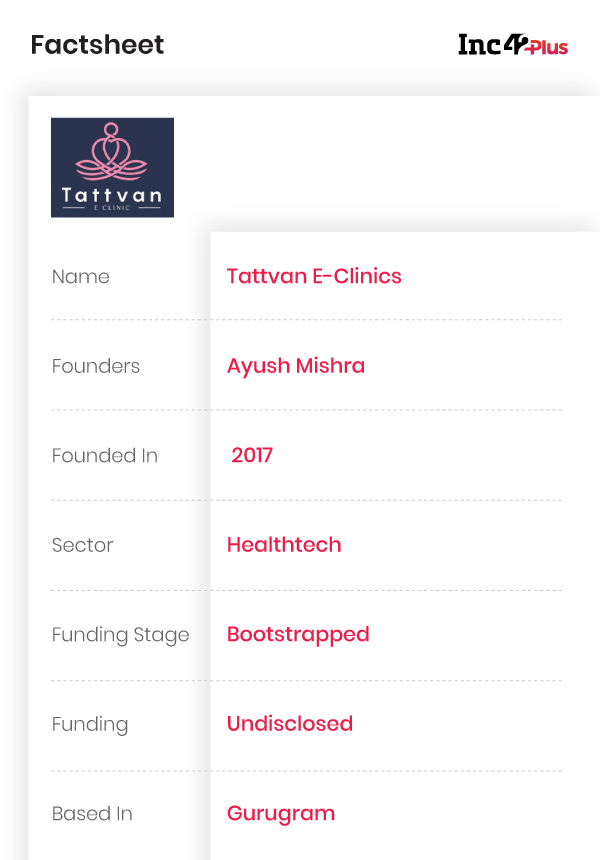 Similar to Tattvan, the likes of Practo claims to have witnessed a 500% increase in online consultations between March and May, of which 44% teleconsultations were from non-metro cities. In a way, these statistics reinforce the recent acceptance of telemedicine in both metro and Tier 2 and 3 cities, and with the NDHM coming soon, the problem of access will need to be solved quickly for greater healthcare penetration. 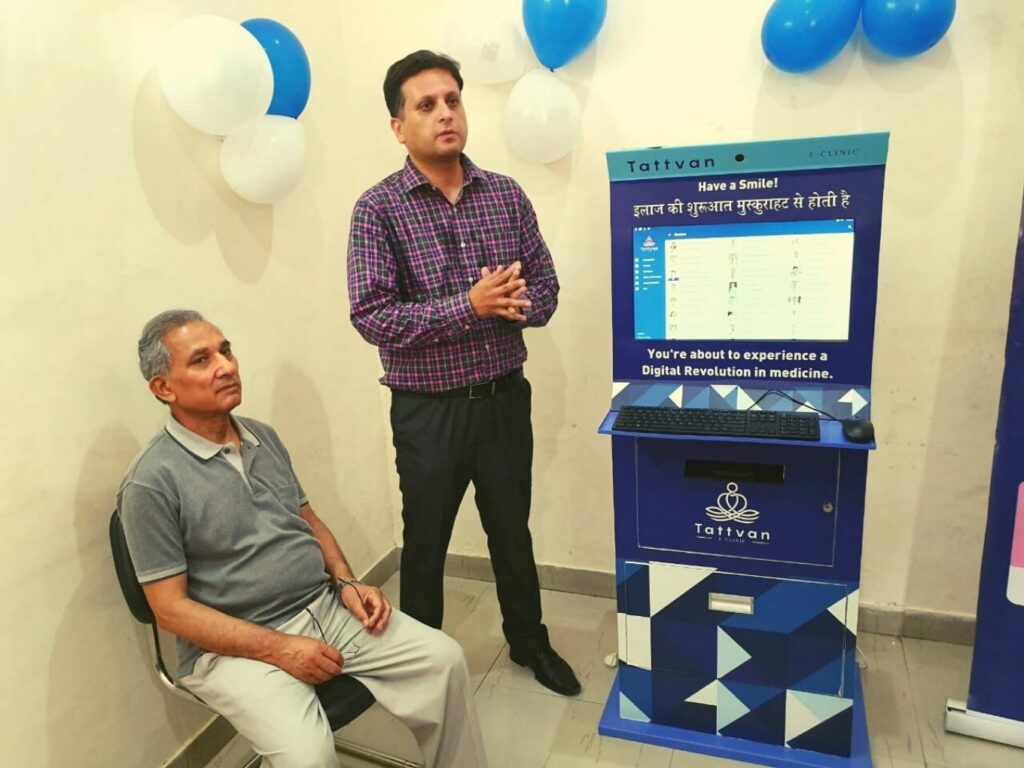 Focussing on smaller towns, rural areas and Tier 2 and Tier 3 cities, Tattvan E-Clinics operates brick and mortar telemedicine centres. The company claimed that its clinic setup is unique in itself as it allows the people from smaller towns who don’t have the access to a good healthcare facility to be able to consult the best specialists across the country. At the same time, it’s geared up for remote healthcare too.

In an attempt to bridge the healthcare gap between urban and rural India, Tattvan’s telemedicine centre not only provides access to the specialists for consultation, but also claims to provide tele-diagnostics at an affordable rate. Further, Mishra said that the telemedicine clinic itself acts as a one-stop solution for the patients seeking advanced healthcare from home.

Coming to Tattvan’s business model, it predominantly comprises setting up of clinics across the locations that matter the most, including franchise clinics in smaller towns, clinics in real estate townships and e-clinics in corporate setup. Apart from these offerings, Tattvan has also developed a product/app called ‘Workplace Wellbeing,’ which is a customisable app for the corporates and enterprises that offers a holistic healthcare plan to the employees with services like tele-consultations, diagnostics, second medical opinion and more, integrated onto the platform.

Currently, Tattvan’s revenue is primarily derived from the franchise clinics and healthcare plans offered to the corporate set up which includes various telemedicine services. “Depending on the speciality and the geographical area the consultation charges range from as low as INR 100 for a primary consultation and can go upto INR 2K for certain specialties,” Mishra added, sharing the pricing model of Tattvan, where it charges the patients and not the doctors.

In India the irony is that despite most people residing in villages and small towns, the healthcare facilities are limited in these areas. Naturally, Tattvan’s model is targeting this aspect. ”The reason was primarily to cater to the population that is actually in need of these services where even the facilities of primary care are either not available or lacking,” said Mishra, worryingly. Overall, there has been an increase of 3x to 4x in the telemedicine services demand across the industry. Many experts believe that even after the pandemic situation ends, people are most likely to stick around with the online services given the quality and ease at affordable prices.

Rajat Garg, cofounder and CEO at telemedicine startup myUpchar, told Inc42 that doctors adopting teleconsultation platforms in a big way will also help improve traction and revenue generation. When users realise that 85%to 90% of the cases don’t require a physical consultation, they will likely prefer the remote option.

Tattvan’s Mishra said that there will be huge investments and a complete transformation in the telemedicine segment in rural India. It will not only add to the competition, but also raise the bar in services. Tattvan claims it is targeting 50 telemedicine centres by 2020 and 2000 more e-clinics in India.  “I believe the segment will have immense growth over the next couple of years to be in the over $500 Mn industry in India. We are planning to achieve this by various outreach programmes in these areas because it would help us be a name in the household,” he added.

In addition to this, Tattvan’s B2B vertical ‘Workplace Wellbeing’ programme is specifically designed keeping in mind the ‘work from home’ aspect. It has recently attracted various companies not only from India but even from Brazil and Africa. “We are focusing more on these programs to offer corporate organisations in terms of growth and reach both.”