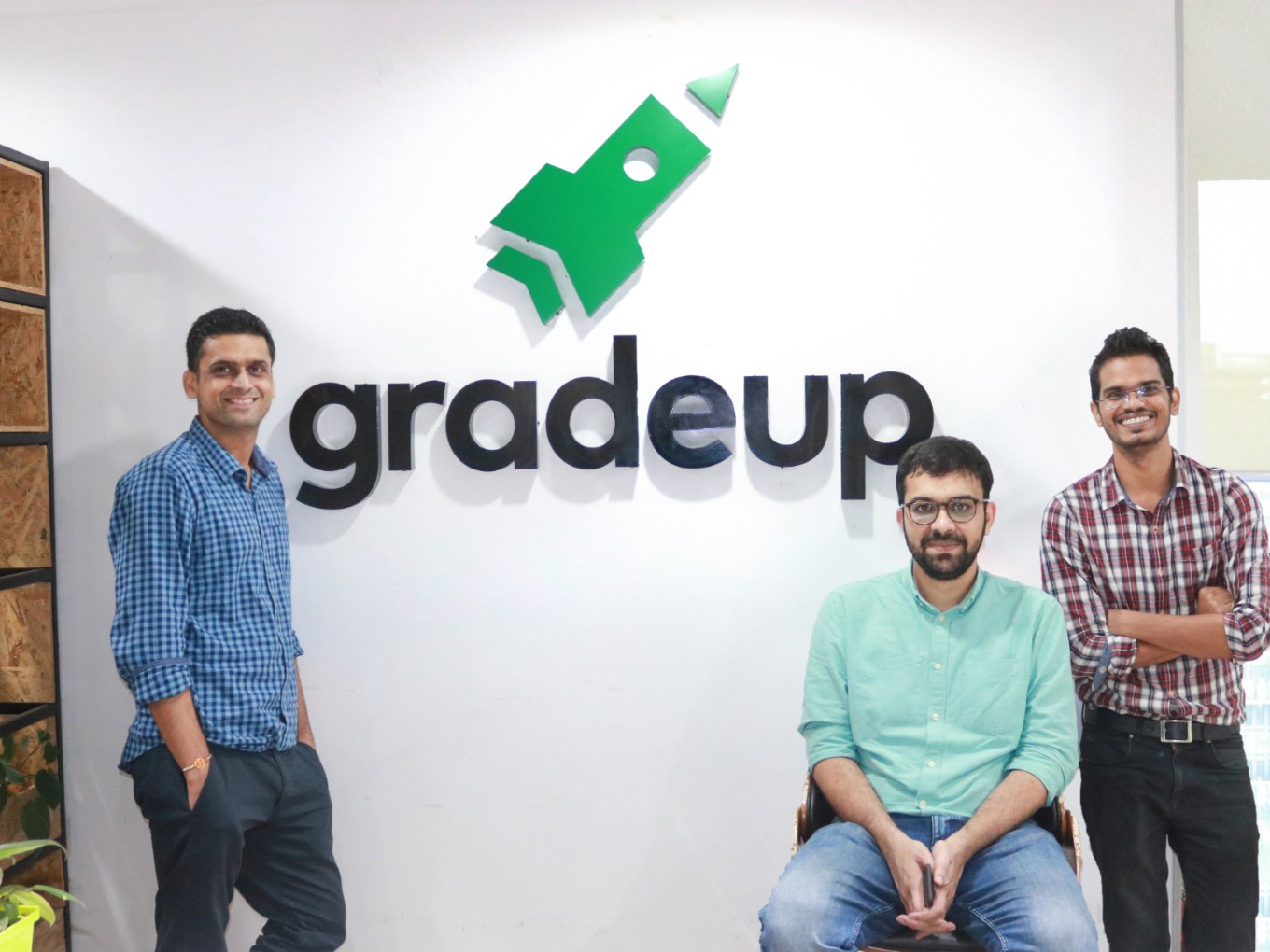 Backed by Times Internet, edtech startup Gradeup was launched in 2015

The core advantage for Gradeup is its nationwide student community, according to founder Shobhit Bhatnagar

In FY20, the startup aims to achieve 5 Mn MAU and a transactional base of 5 Lakh users

Edtech in India started gaining popularity almost a year after the dawn of ecommerce in 2010. Between 2009 and 2013, the edtech areas and startups in India that gained most traction were K-12 education (BYJU’S), entrance exam or test prep apps such as Toppr and Vedantu, and online skill development and certification platforms such as Simplilearn andUdemy. However, all these platforms had one common challenge: Building trust of consumers in digital over traditional offline education. Founders of online exam preparation platform Gradeup — Shobhit Bhatnagar, Sanjeev Kumar and Vibhu Bhushan — are willing to bring the same trust with their community-building effort.

“With experience and research, we realised that providing only quality content is not enough,” Bhatnagar told Inc42. This learning came in from digitising the offline content from book publishers for over two years and launching their first startup GradeStack in 2013 to create mobile-friendly interactive exam content for preparation.

“We learnt that people prepare better when they prepare together; by questioning, helping and challenging each other. It is only by preparing actively every day with a well thought out study plan and relevant practice material and making small but significant headways can one ensure continuous improvement,” he added.

The trio thus launched Gradeup, putting at its very core the community aspect built around students, experts and mentors. The platform now offers live online courses designed by expert faculty from India’s most premier institutes. These courses follow a day-wise study plan which has live classes with interactive quizzes, mind maps, quizzes, mock tests with live analysis, and 1-on-1 mentorship, 24*7 doubt resolution. It also has 9 YouTube channels for various courses. All this means, it has a steady distribution channel and this means it has racked up users at a great pace.

Backed by Times Internet, Gradeup is now looking to invest INR 150 Cr in building an advanced product, scaling on categories and reaching out to a larger audience. So far, for Live classes alone, it has realised 15,000 enrolments already this year and is looking to close this FY with 60,000 enrolments.

“This year we should close at INR  30 Cr which is ~30% higher than what we predicted at the start of this financial year. The enrolments have grown 3x from Q1 19 to Q2 19, and revenue has been increasing by about 25% month on month. By the end of the current financial year, we are aiming to touch MAU of 5 Mn users and a transactional user base of 5 Lakh. Registered users should increase to 2.5 Cr,” Bhushan added.

Here’s a look at how the startup intends to achieve its targets.

Technology Is The Backbone Of Gradeup’s Strategy

Like Bhatnagar, Bhushan also believes that personalisation is the key to bring in the much-needed effectiveness in helping students succeed in the competitive exams. “And technology is certainly an aid here,” Bhushan added.

The Gradeup platform leverages big data such that each student’s exam preparation feed is tailor-made according to their strengths, weaknesses and areas of improvement.

Further, the Gradeup app is developed using leading technologies including Elasticsearch, Cassandra, Nodejs, Bigquery, Tensorflow, Postgres, React, and Wowza. As the platform also caters to students in Tier 2 and 3 cities with relatively slower data speed and low-end smartphones, the app size is maintained at a light 7 MB. Furthermore, data bandwidth is automatically optimised for users with weaker connections, with image compression and cached data for offline content.

Through machine learning models, Gradeup facilitates picture or text-based search wherein students can ask questions and receive answers within three seconds, which solves a big pain point in many learning apps — i.e. not being able to search for answers to doubts quickly.

With such a large user base, Gradeup faces the same scale-up challenges that many new growth-stage digital platforms face, but with robust auto-scaling servers, it manages to adjust the load when traffic increases or decreases, all while maintaining an average response time of 50ms so that answers are never far away from learners.

“Over the last four years we have built a very strong product and engineering team. We are looking at doubling this team to 100+ people in the next one year and are investing a lot in research and product development to build services which can deliver outcomes for our users,” said Bhushan.

“Today we are delivering courses which are 200-300 hour long courses, like 200 1 hour sessions over a period of 6 months and students are consuming that. Look at the kind of accessibility this gives to the students.”

The first year is the most difficult for every startup. It was not any different for Gradeup. While organic marketing and referrals were keeping the platform afloat, a big surge was the need of the hour. So Gradeup decided to do offline campaigns in a few selected cities, build student ambassadors there, and even reached out to local newspapers.

“Three months of this intense activity raised the bar of the student engagement on the platform multi-folds. The interesting thing is, once you start building a community for a particular thing, it keeps on expanding on its own. And this itself is a very big motivating factor,” Bhatnagar added.

For many test prep modules, Gradeup is now able to reach 10% of the expected monthly quantum of test-takers. For instance, if 15 lakh students take banking entrance exams every year, then 1.5 lakh students are using Gradeup every week, as claimed by the startup’s founders. Thanks to the community building, Gradeup has managed to reduce the churn rate of users, a challenge most edtech players face.

Going ahead, Gradeup aims to strengthen its community further, add more value-added services such as live coaching, one-on-one tutoring, and increased exam coverage. It is also expanding its content categories to cater to aspirants working towards entrance test prep in research, legal and education sectors.

According to a report by research firm Technavio, the India test prep market will grow to $7.14 Bn by 2022. Like ecommerce, customer acquisition costs are quite high in edtech as well. With players like Vedantu, Unacademy, BYJU’S raising big rounds, and with the opportunity in the market, Gradeup’s strategy to invest INR 150 Cr in expansion will also compensate for the increased costs of operation and the timing is right for the market.

However, with most edtech startups bleeding investor money without generating a stable revenue stream, the question here is how Gradeup is planning to utilise this fund effectively?

Bhatnagar said the spending would be for three core areas:

While the strategies are good, the doubt on whether it will be able to reach profitability still remains. An enormous part of this market size is still captured by the offline giants like Fiitjee, Akash and other coaching institutes. While the edtech startups may argue on the fact that they are offering the same content with better analysis at 1/3rd rate, they cannot deny the fact that even after a decade, edtech is still nascent and thriving mainly on investors money.

Even VC-funded companies such as BYJU’S may claim to show profitability, yet cannot deny the fact that the conversion ratio of enrolments (trials) to paid subscriber is still lower than western counterparts. Further, with the entry of players like Amazon and Paytm into the India  test prep segment within the edtech sector, the fight for market share will only get brutal.

“Across the market, the conversion percentage varies from 1.5% to 3% and we happen to be at the higher end of the spectrum. We believe in the next two years this percentage will shift in the range of 6% to 7.5% fuelled by higher adoption and proof of delivering better outcomes.”