In Indian ecommerce today, fashion perhaps is the biggest piece of the pie. What with so many different online retailers of clothing, accessories and footwear, online brands and even marketplaces for the same, the conventional Indian online shopper is today spoilt for choices. However, one can even say that all this clutter has made things difficult for more players to enter this market as it is not only very crowded but perhaps there is nothing new, one may argue, left to be done.

But this is certainly not the case if you can really stand out from the crowd. For then, not only the common people but even celebrities will notice you! This is what Prateek Kayan has made possible with Brown Boy.

What is Brown Boy?

Brown Boy is a premium clothing and fashion accessories brand which has international appeal from the look and feel of it. While we have seen a lot of different websites selling Tees and fashion accessories online but there is something about Brown Boy that actually makes users stay on it for quite sometime and not keep shuffling tabs. – the photos used, the models and off course the clothes and accessories themselves. They presently deal with T-Shirts and Bow Ties but will be adding a lot more products to their range in the near future.

Brown Boy: A Brand & a Personality

Brown Boy as a brand has a lot to offer for the fashion conscious man, be it a metropolitan guy or someone from Tier II cities of India. Firstly, all the designs are done by Prateek Kayan and his brief stay in the Big Apple (New York City) is what helped him define the entire range. Moreover, they are perhaps the only company in India that not only practices 100% fair trade when it comes to purchasing raw material but also use only 100% organically produced  fabric. “We are a complete Make in India firm with all of our products being designed by me and manufactured here in Kolkata itself. In fact the bow ties that you see are actually hand crafted,” tells Prateek.

Today, products by Brown Boy are worn not only by the general public but even celebrities. Many famous personalities like Arjun Kapoor, Hrithik Roshan and even Suhel Seth sport Brown Boy Tee’s and bow ties! 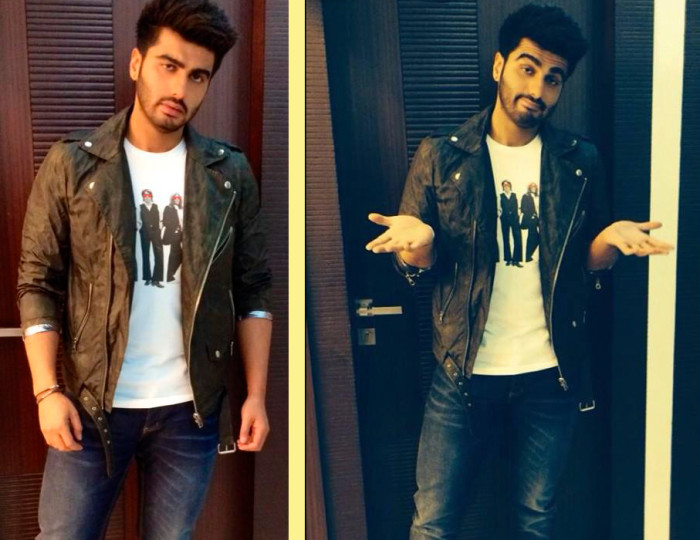 Interestingly, Prateek says he hardly spent anything on marketing. Most of the resources were spent on designing products and getting them made. Perfection was the main driving factor and that led to quite a lot of expenditure both in terms of time and money. “When you are new, people do not take you seriously. I used to sit outside the office of the best fabric makers of our country for hours, even days at a stretch demanding to meet them. In the end, they just got tired of me and finally relented. Also, there was in fact a time when I did not even have money for the photoshoot. One of the models that you see on the website is in fact a friend who did not charge me for the shoot and the camera used for the same is a simple point-and-shoot one and not some fancy DSLR as I really could not afford one.”

Once it started getting some attention, Prateek started thinking of writing a nice long mail to GQ one night, the popular men’s magazine and see if they could do a feature on them. And before he could even get to that, the folks from GQ actually called him up asking for a possible feature!! What’s more, when he came down to Mumbai to meet the editor, he was actually wearing a Brown Boy Tee!

Prateek says, “I always judge things from my own perspective. If I would not like to wear something, it will not be made. Period. Also, I had no clue as to what goes into making a T-shirt or even a simple bow tie. Having never ever been to any design schools, I learnt everything while actually doing it. Also, even my website has been through a lot of changes. While I did all my designing myself, I had the help of two really good friends who did the coding for me.”

Prateek Kayan did do a crowdfunding campaign on Wishberry that got an amazing response! The leverage from there helped a lot and even Ronnie Screwvala, a prominent film director even shared the campaign with his followers on Twitter. In the end, with an amazing 113% funding, Brown Boy became West Bengal’s first crowdfunded startup and India’s first fashion brand.

According to Prateek, the main reason that kept him going was his determination. “There was a point in time when he did not even have funds. But this didn’t stop me from moving forward. I feel there is still a long way to go but I am really humbled by all the support am getting from all the people out there. Their feedback has been the biggest motivation for me. They frequently call me, WhatsApp me with positive feedback, appreciation and even ask me repeatedly as to when my next season is coming out. Some have even gone as far as to say that we are should actually increase our prices since the quality is absolutely awesome.”

Till date the company has never offered any discounts or any sort of offers whatsoever. We do not believe in the discount model as our products are amazing and as Schindler said “Good Things Cost Money”.

“Someday I do hope to be at par with the Tommy Hilfiger’s and Jack & Jones of the world!”